Analyse how the development of relationship between characters helped you to understand the characters in the written texts. Lord of the Flies

Don't use plagiarized sources. Get your custom essay on
“ Analyse how the development of relationship between characters helped you to understand the characters in the written texts. Lord of the Flies ”
Get custom paper
NEW! smart matching with writer

When the boys crash and arrive onto the deserted island they attempt friendship despite their differing personalities, “Jack and Ralph smile at each other with shy liking” just as any school boy would do. After being elected as chief of the tribe, Ralph makes his first move of power in electing Jack as chief of the hunting group to ease his embarrassment of wanting to be over all chief but not receiving this role highlighting Ralphs caring side to his personality.

The boy’s continue to work together as a team and acknowledge one another’s leadership differences but manage to work together still in creating the best island possibly for the tribe. As the tension between them builds arguments begin to break out as their priorities begin to drift “they look at one another, baffled by love and hate”. With Ralph being a democratic leader, he takes in the opinions of the other tribe members in order to create the best society possible.

It becomes an obvious barrier between the two boys drawing them back from being able to create the perfect society as they simply cannot respect one another’s way of leading. Jacks desire towards hunting and disobeying Ralph’s rules situation is similar to the biblical reference of Jack likening to Satan and Ralph Likening to God. People choose to follow Satan because he persuades and tricks people into believing his way is the more enjoyable way as it is a lot easier to go with Satan’s way then to follow Gods way, just as the tribe begins to fall under Jacks excitement towards hunting and ignoring the need to get rescued with a fire this being Ralphs rule.

However this is all expected as for a child the more exciting and enjoyable approach to life is the path an average child would choose to follow proving the actions of the tribe to be considerably normal for them to want to begin following Jacks way of life. At the end of the novel the relationship between the characters Jack and Ralph proves the boys personality differences and helps the reader understand them.
Throughout the whole novel it was evident of their unspoken hate towards one another and this tension is finally broken when the remainder of the tribe turns on Ralph as their previous chief and choose to follow Jack and his way of life. “And you shut up! Who are you anyway? Sitting there telling people what to do. You can’t hunt you can’t sing.” Jacks idea of a perfect leader is someone who had the previous roles of leadership in other scenarios, such as Jacks role of being leader of a school boys’ choir, giving Jack the impression that he is indeed perfect for the position of tribe leader.

Jacks displays of power and leadership is Golding’s representation of an autocratic government where the power was taken from the tribe and not voted upon whereas Ralphs leadership and power was voted on just like a democratic government where he takes to mind the opinions of the other children. Understanding this, the reader can then begin to understand how dramatically different the characters each are and Golding uses the idea of ‘good versus evil’ in the characters Ralph and Jack by showing them opposites in their positions on social responsibility, personality, and appearance.

The only thing Ralph and Jacks have in common is their utter hatred towards each other. Jacks arrogant and self-centred mind set causes him to believe that once hunted and killed, the pigs he catches make him worthy of the role of leader. However, in a tribe today any person who can bring back meat to feed the rest of the tribe is generally the best leader of the group, but due to the boys situation, it is only a bonus that the boys can have meat and the real focus should be getting rescued, this being Ralphs focus.

With the tension being released within the last few chapters, Ralph is hunted due to the tribe’s sudden hatred towards him and their complete savagery takes over despite Ralphs caring nature and civilised personality. Throughout the novel Piggy and Ralphs relationship has been an eye opener to expose the boy’s nature and helps the reader to understand each character independently. When Ralph is introduced to Piggy instantly the differences between the two is shown by the way they speak: “sucks to your ass-mar!” said Ralph as he mocked Piggy’s unusual accent; from Ralph’s mockery, the reader can see that the two upbringings were very dissimilar.

Piggy is in a lower socio-economic class and the two boys being forced into co-habitation together highlights the contrast between the two defined classes of society. Being a typical child Ralph chooses to name Piggy as Piggy just by looking at his physical appearance once again showing Ralphs back round of being from a more upper-class region in England highlighting his ‘bullying the poorer child’ mind set. Understanding this, it is not expected that the boys would have a good relationship due to Ralphs immaturity but as Ralph soon realises the capability of Piggy’s knowledge and how that would help his leadership skills they soon become friends amongst the chaos.

Piggy’s knowledge represents the law and order of the adult world. Throughout the novel, Piggy attempts to condition the society the boys had made to mirror the society they all lived in in England. Piggy’s continual references to his auntie demonstrate this philosophy. He tries to pull Ralph towards the reason-oriented side of human nature.

The overall characteristics of each of these two important characters proves that amongst the islands nightmare state it had spiralled into there was still a sense of hope for humanity amongst it due to the maturity of Piggy who then taught Ralph his ways making Ralph an overall stronger leader, but despite all this the rest of the tribe still fell short and turned on both Ralph and Piggy making them “outsiders”. Ralph’s character can be once again shown through his relationship with Simon where Simon’s characteristics help shape Ralph into the boy he becomes. Simon can be seen as pure goodness, and he is something of a Christ like figure.

Simon is fearless as he is the only one who goes to confront ‘The Beast’. The pureness in Simon, like Jesus Christ, prevents him from submitting to the beast-like nature of mankind just as Christ did not succumb into the terrible ways of man at his time. Simon also is the only character who stays true to his personal morals and beliefs although Ralph did try to stay true to his beliefs he did fall into the temptations of the tribe by joining them in a tribal dance around a pig they had just caught. Simon gives Ralph encouragement. Whenever Ralph becomes despondent or loses hope that they will be found, Simon lifts his spirits: “I just think you’ll get back all right.”

Golding portrays Simon, the first boy to be killed (followed by the death of Piggy) as a symbol of a Christ-figure, of grace and light. Ralph’s characteristics of goodness, on the other hand is in contrast to Jack’s evil. Ralph’s goodness is based on order, logic, rationality, and reason. But due to Ralphs beliefs it ends up turning on him as he believed everyone has good in them, but through the novel the reader is introduced to the idea that not all people have good in them, and this is highlighted through the imagery of school children turning into a “pack of painted niggers”.

Throughout the novel “The Lord of the Flies” William Golding uses the relationships to ultimately shed light on the characters. The relationship between Ralph and Jack lets the reader begin to understand the true vision of good versus evil which is portrayed throughout the entire novel by Jack being the evil character and Ralph as being the good. Ralphs relationship with Piggy and Simon accompanies Golding’s idea of the good characters as Piggy and Simon pay important roles in aiding Ralph to make him the character he is at the end of the novel.

Analyse how the development of relationship between characters helped you to understand the characters in the written texts. Lord of the Flies. (2016, Apr 27). Retrieved from https://studymoose.com/analyse-how-the-development-of-relationship-between-characters-helped-you-to-understand-the-characters-in-the-written-texts-lord-of-the-flies-essay 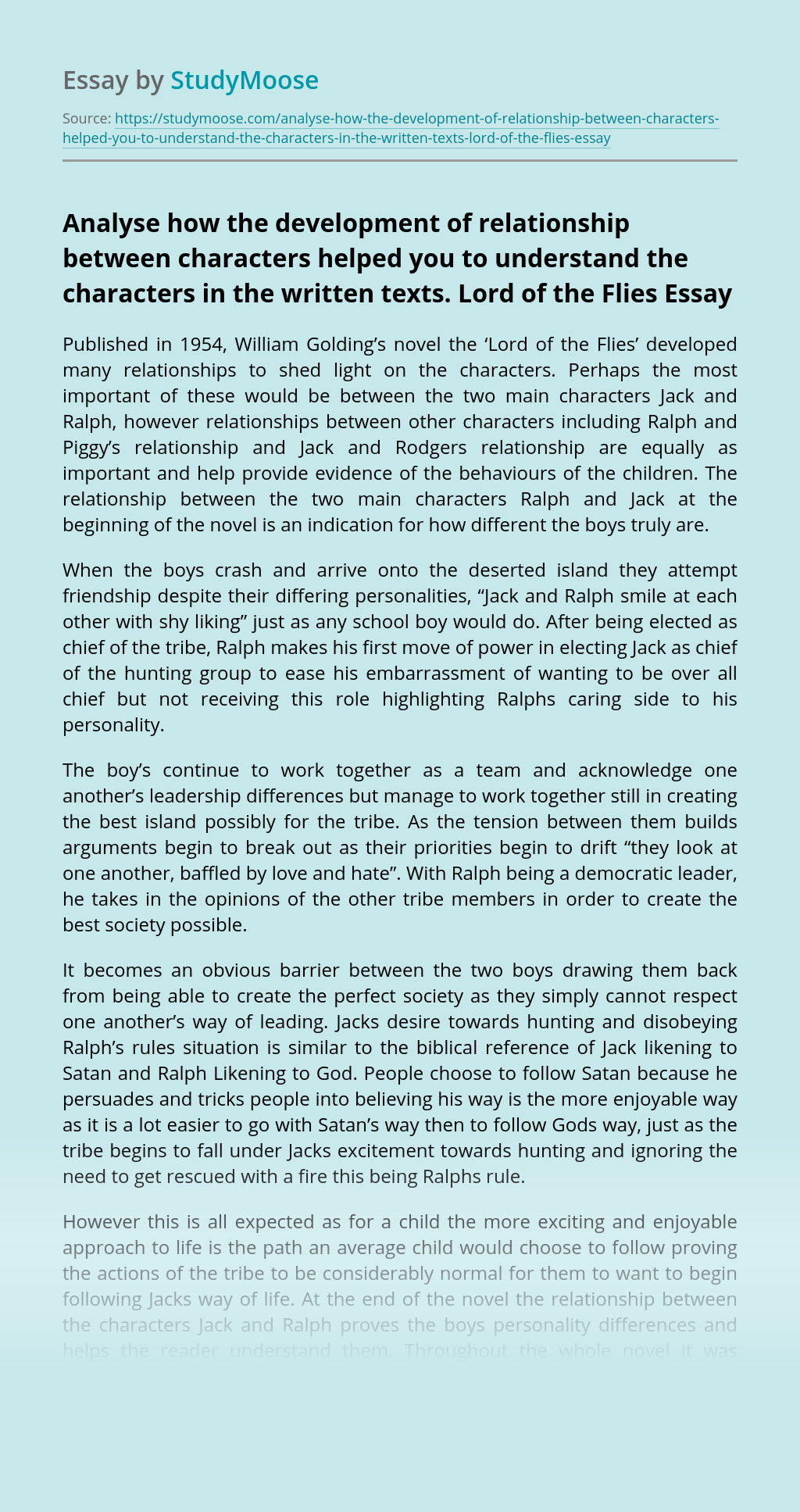