?Ralph and Jack’s Conflict between Good and Evil in Lord of the Flies Over the ages, human behavior has shown that purity of thought leads to a similar action and ultimately to an outcome that is consistent with the original thought. Conversely, the history of man is tainted with his inherent lust for power and greed causing great conflict. In Lord of the Flies by William Golding, the author contrasts the moral thoughts and deeds of his flawed hero Ralph to the self gratifying motives and actions of his adversary Jack.

Don't use plagiarized sources. Get your custom essay on
“ Ralph and Jack’s Conflict between Good and Evil in Lord of the Flies ”
Get custom paper
NEW! smart matching with writer

The ebb and flow of good versus evil on the island is driven by the waves of positive and negative thoughts in the minds of the two main characters. Ralph and Jack’s continuous struggle of good versus evil is not only between the two of them, but is within their own minds as well. Jack shows his inclination towards selfishness and violence while Ralph keeps a caring and positive mind towards the group’s survival.

The boys have a meeting on the top of the mountain to discuss what to do next concerning their survival, which gives jack the opportunity to bring up hunting: “’It broke away-‘ ‘Before I could kill it- but- next time!

’ Jack slammed his knife into a trunk and looked round challengingly” (31). Already Jack begins to reveal his aggressive and violent nature. Jack has the opinion that being dominant and seen as powerful is more important to his own survival, while Ralph thinks about the survival of the group as a whole.

Jack’s hunting is more about a selfish need than about providing for others. During the first hunt, Jack goes to satisfy his craving for meat and power: “He swung his right arm and hurled the spear with all his strength.

From the pig-run came the quick, hard patter of hoofs, a castanet sound, seductive, maddening- the promise of meat” (49). Jack’s hunt for meat has become an obsessive search for power and a way to demonstrate his strength to the boys. He believes that catching and killing a pig and bringing it back for the others is the ultimate way to show that he is dominant and better than them. Jack is now consciously embodying his evil thoughts into his physical appearance. After realizing his hunting methods are not adequate, Jack paints his face into a mask in order to hunt more successfully: “Jack planned his new face.

He made one cheek and one eye-socket white, then rubbed red over the other half of his face and slashed a black bar of charcoal across from right ear to left jaw” (66). He is consciously using the colours black and red to demonstrate the darkness and thirst for blood inside of him. Jack also shows his evil and anger in the way he aggressively slashes the charcoal onto his face. Ralph’s deeper level of thinking leads him to take positive action towards improving conditions on the island.

Ralph walks along the beach and come to realization just how badly things have deteriorated on the island: “With a convulsion of the mind, Ralph discovered dirt and decay; understood how much he disliked perpetually flicking the tangled hair out of his eyes, and at last, when the sun was gone, rolling noisily to rest among dry leaves” (82). Ralph’s thoughts, while not entirely good, have helped him to realize how bad the actually situation is on the island and what he needs to do to stop the situation from getting worse. Ralph’s world of order is pitted against Jack’s world of chaos.

At the meeting, Ralph tries to reestablish the rules and Jack is openly challenging his authority: “Ralph summoned his wits. ‘Because the rules are the only thing we’ve got! ’ But Jack was shouting against him. ‘Bullocks to the rules! We’re strong- we hunt! If there’s a beast, we’ll hunt it down! We’ll close in and beat and beat and beat- ! ’” (99) Ralph expresses his good thoughts in a way to keep justice and order on the island, while Jack tries to destroy any trace of this with thoughts of rebellion and power over Ralph’s law.

When Ralph realized that he cannot win, he gives into the bad thoughts that consume the island. Ralph is the last one left who still has a sense of order and is being hunted by the others for not agreeing with their ways: “But then the fatal unreasoning knowledge came to him again. The breaking of the conch and the deaths of Piggy and Simon lay over the island like a vapour. These painted savages would go further and further” (204). He experiences bad thoughts regarding his survival and develops a sense of hopelessness and futility.

Ralph, slowly losing his own sanity and at the loss of Piggy and Simon there to induce good thoughts, is left to hide and attack the others for his own survival. Ralph is entirely overwhelmed by the thoughts of good and evil. He flees from the savages onto the beach where he finds, standing before him, a naval officer with a ship at his back. “… Ralph wept for the end of innocence, the darkness of man’s heart, and the fall though the air of the true, wise friend called Piggy” (225).

All of Ralph’s thoughts crash down on him at this moment and he is overwhelmed by the truth of man’s inner evil and by the death of his loyal and good friend Piggy. The conflict between the two characters, Ralph and Jack, is underlined by the good and evil thought patters that directly lead to the actions they each take. While good thoughts bear good fruit and bad thoughts bear bad fruit, the potential for good and evil lies within all of mankind. Works Cited Golding, William. Lord of the Flies. London: Faber and Faber Limited, 1958. Print.

Ralph and Jack’s Conflict between Good and Evil in Lord of the Flies. (2016, Nov 13). Retrieved from https://studymoose.com/ralph-and-jacks-conflict-between-good-and-evil-in-lord-of-the-flies-essay 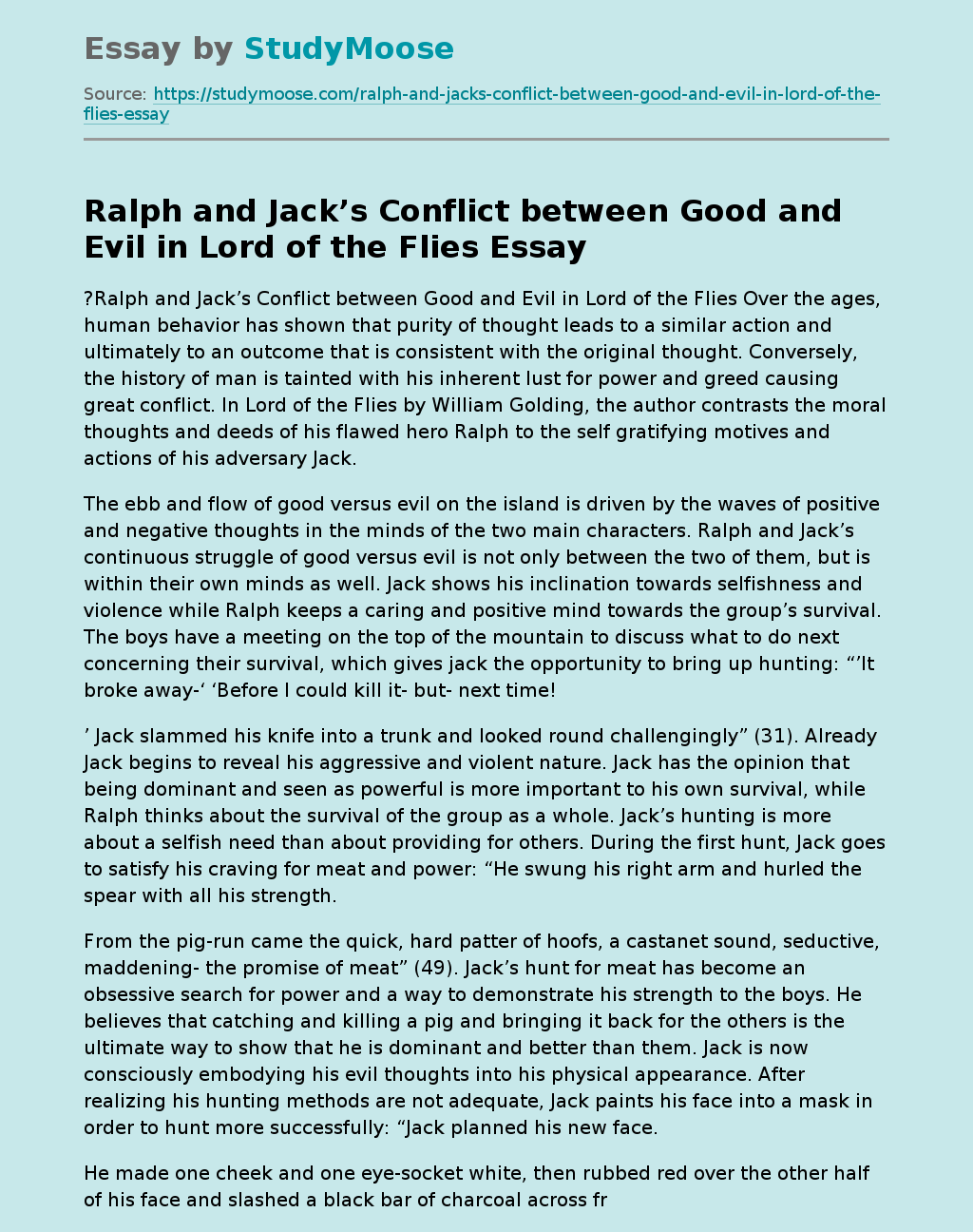