Quotations Describing Ralph from "Lord of the Flies"

“And another thing. We can’t have everybody talking at once. We’ll have to have ‘Hands up’ like at school…Then I’ll give them the conch…He can hold it when he’s speaking…And he won’t be interrupted. Except by me.” (pg. 31)

– This quotation proves a lot about Ralph and his character. It proves that Ralph demands a lot from everybody trapped on the island, the demands order and respect for other people. It shows his democratic view upon handling many situations or problems that occur on the island.

Turn in your highest-quality paper
Get a qualified writer to help you with
“ Quotations Describing Ralph from “Lord of the Flies” ”
Get high-quality paper
NEW! AI matching with writers

Ralph is willing to listen to suggestions, ideas, or opinions from everybody trapped on the island as long as they have the conch, Ralph will listen to everyone and respect them as long as they are holding the conch because everyone should respect the fact that the person has the conch which means nobody should be speaking while the conch is not in their hand. This way everyone’s message gets across and Ralph can make a final decision knowing everyone’s input.

This makes him fair because he wants to give everyone a chance to speak and is also proves that he is a great leader because everyone listens to him because they respect them.

– This quotation proves that Ralph is an optimistic leader. Even though it is obvious that everyone trapped on the island is in a difficult situation that might possibly never be solved Ralph still finds a way to stay optimistic.

Ralph knows that the situation he faces is tremendously difficult but being pessimistic will not solve anything or improve their chance of being saved, being optimistic definitely improves their chances of being rescued, and optimistic is the only option for Ralph. Being optimistic drastically improves the morale and attitude of the group because everybody listens to Ralph so they will also be optimistic and sooner or later they will be rescued. They just got to make the most of the situation they are being faced with until they are rescued. Ralph feels good about their chances of being rescued off the island and he will never change his mind.

“Ralph, looking with more understanding at Piggy, saw that he was hurt and crushed. He hovered between the two courses of apology or further insult. ‘Better Piggy than Fatty.'” (pg. 21)

– This quotation proves that Ralph is a great person, he is sincere and considerate for other people, and knows when a joke has gone too far. He has realized that Piggy is not appreciating the way the group is treating him so Ralph decides to get involved by telling everyone that they should call Piggy by his name and not by Fatty because that is not the right thing to do. Ralph realizes that he would not like people making fun of him for his appearance so therefore nobody in his group should have to put up with being made fun of.

Ralph is a leader that wants to be respected but in order to gain respect you have to give respect and after making this stand he is gaining respect from Piggy and also the rest of the group. Ralph is considerate of everyone and realizes that he has made a mistake and he should be apologizing to Piggy for his dreadful mistake. This proves that Ralph is a unique and understanding leader because if he was an arrogant leader like most of them are he would just do whatever he wants not caring about other peoples feelings, but Ralph obviously is the complete opposite of that.

“He was old enough, twelve years and a few months, to have lost the prominent tummy of childhood; and not yet old enough for adolescence to have made him awkward. You could see now that he might make a boxer, as far as width and heaviness of the shoulders went, but there was a mildness about his mouth and eyes that proclaimed no devil.” (pg. 5)

– This quotation reveals a lot about Ralph’s physical characteristics. The quotation proves that Ralph is twelve years and a few months old, he is not an adolescent meaning he still has not hit the awkward stage of his life. He has an athletic built with wide and heavy shoulders but his gentle mouth and eyes give him the nice guy appearance even though he is extremely large. This quotation proves that Ralph seems to be a nice guy who really understands people, he also appears to be a leader who can inflict rules and regulations with no discussion because everybody is probably terrified of him at first sight because he is so well proportioned and this characteristic allows him to get rules out to everyone and everyone obeys them.

– This quotation proves a lot about Ralph and his leadership abilities. In this situation, Jack is agreeing with Ralph. It is suggested in this quotation that Ralph wants to inflict rules and regulations for the whole group so that the order on the island can be maintained and life on the island can be easier. This obviously shows that Ralph is drastically focused on keeping order on the island because he thinks that this is the first priority in his leadership responsibilities. Jack is agreeing with Ralph proving that other people on the island appreciate what Ralph is doing and his decisions. This is because Ralph listens to everyone’s suggestions and opinions first and than makes the best decision possible for the group and this keeps everyone satisfied. No matter what Ralph decides the group will always support his decisions because all his decisions are always fair and understanding.

Quotations Describing Ralph from "Lord of the Flies". (2016, Aug 02). Retrieved from http://studymoose.com/quotations-describing-ralph-from-lord-of-the-flies-essay 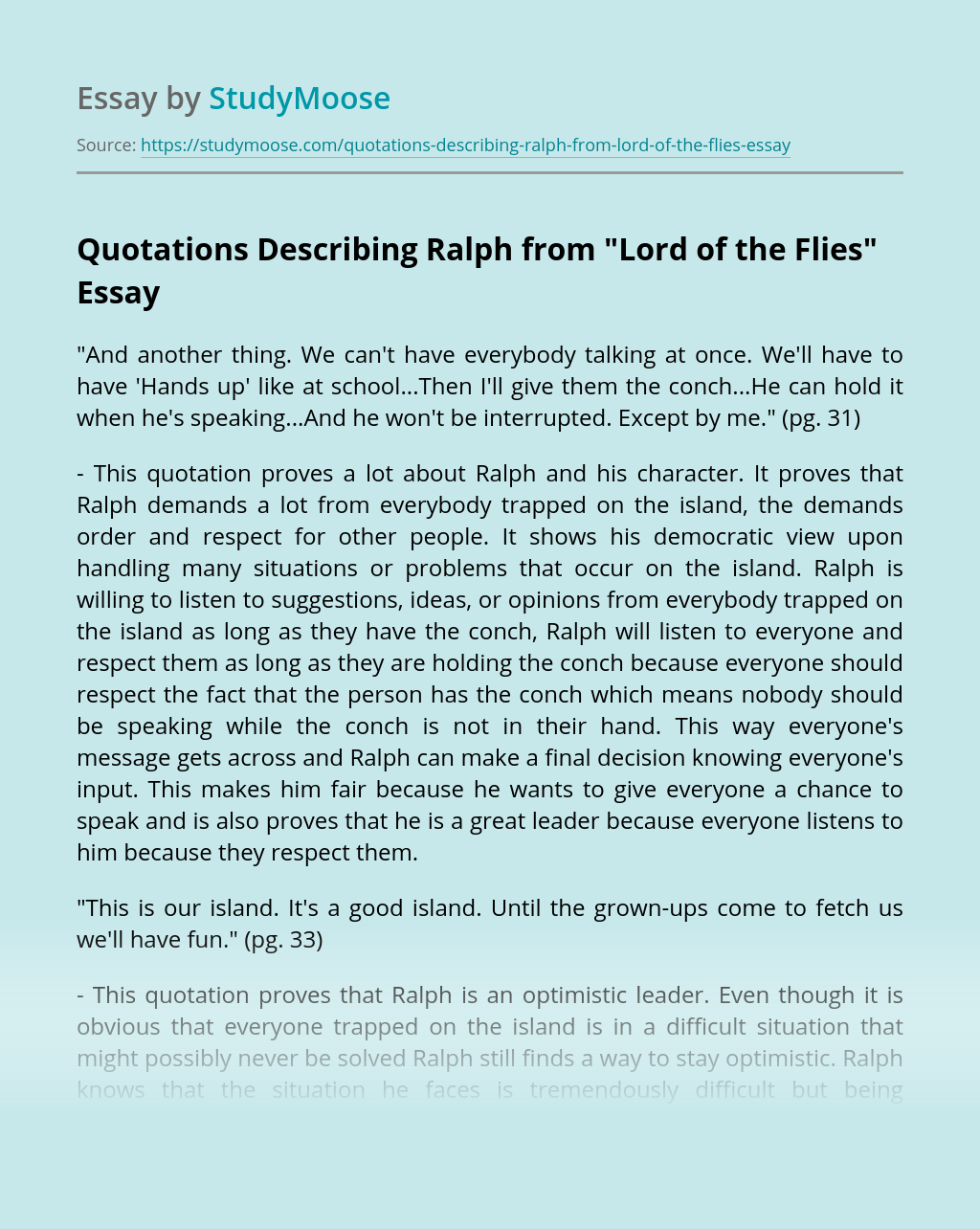 Turn in your highest-quality paper
Get a qualified writer to help you with
“ Quotations Describing Ralph from “Lord of the Flies” ”
Get high-quality paper
Helping students since 2015
Stay Safe, Stay Original