Nowadays, texting is the main source of communication, especially for college students. They tend to not have the time to have conversations with others on the phone because of all the studying and work they may be doing, so they will send a quick text to keep in contact with friends, family, or fellow classmates. The way the words are sent in these text messages are usually abbreviated to quicken the process of texting or spell check tends to fix every word for the texters, the person(s) that is texting, to correct the words for you, thus, this may affect the way the student’s academic success.

Don't use plagiarized sources. Get your custom essay on
“ College students and text messaging ”
Get custom paper
NEW! smart matching with writer

Texting, also known as, short message system (SMS), is a way of communication that allows a person to send and receive short messages, one hundred and sixty characters on average, from a handheld device, such as a mobile device (Shafie, Norizul, and Nazira 26). Texting is mostly used by a young age group between the ages of thirteen to twenty-four, and on average this age group sends two-thousand and four-thousand text messages within a month span, and with every year this average goes up about one thousand more text messages than the following year (The Average Teenager Sends 3,339 Texts per Month).

The use of texting has evolved tremendously since it first came around in 1992. According to the article, The Evolution of the Text Message, on December 3rd, 1992, the first text message that was sent from Neil Papworth’s from his personal computer to Richard Jarvis’ mobile phone.

Jarvis’ sent a text stating, “Merry Christmas”. “In just a year, Nokia released their first phone that was available to the public, which had the text messaging option in the phone. In 1995, Americans sent an average of only 0.4 texts per month, and in 2011, that number grew to an incredible 357” (The Evolution of the Text Message).

Just like what was stated earlier, texting has been a big phenomenon, and without even trying texting has made its own language. There are many different ways, abbreviations, to say certain things while you are texting, and because of this it has made effect on how students perform in the classroom. Devoted texters usually delete vowels, substitute letters with asymbols or numbers, and even on purposely misspell words, because they are just worried about getting their message across (Shafie, Norizul, and Nazira 26). A researcher named Thurlow (2003) claims that the SMS language is only able to understand by people that are used to receiving or sending messages, so it may sound like an ignorant language to people who do not text, if the texter does it to a high extent (Shafie, Norizul, and Nazira 27).

Having a grammatically correct text message is the least of these college student’s worries, and this is when the academic problems begin to occur with the student’s writing, especially first year students. Shafie, Norizul, and Nazira stated that, consonants are used more frequently, than vowels; for example, the word “thanks” is abbreviated to “THX” because in the English language consonants carry a higher meaning than vowels (27). Text messaging has a major impact on literacy because you have become accustomed to typing the way you do in SMS.

I know when I am texting I sometimes use words like “ain’t” instead of “isn’t”, “u” or “yu”, or “bout” instead of about, and because of that when I am writing a paper for class I tend to write certain words the I would in a text message, which deducts my grade, when I could have had a grade than what I received. Some words that are now in the dictionary were added in the dictionary because the words were created through text messaging. Such as the word “lol”, laughing out loud, although this word was added to the dictionary, it is not a word that should be used in formal writing, even though it is every day in our formal writing. If you are writing without thinking most of the time these shorten words or acronyms will be written into your paper without even realizing it.

However, even though texting does affect the way college students perform academically, there are so pros to text messaging. According to Thurlow (2003), teenagers write their text messages informally which result in producing `small-talk ‘ and create the desired social bond (27). The language that is used in text messaging is not only comprehensible, but also appropriate to the overall communicative for these teenagers. “Thurlow (2003) concludes that new linguistic practices are often adaptive rather than necessarily subtractive; as young text-massagers manipulate conventional discursive practices with linguistic creativity and communicative competence in their pursuit of intimacy and social
intercourse” (Shafie, Norizul, and Nazira 27). To conclude, 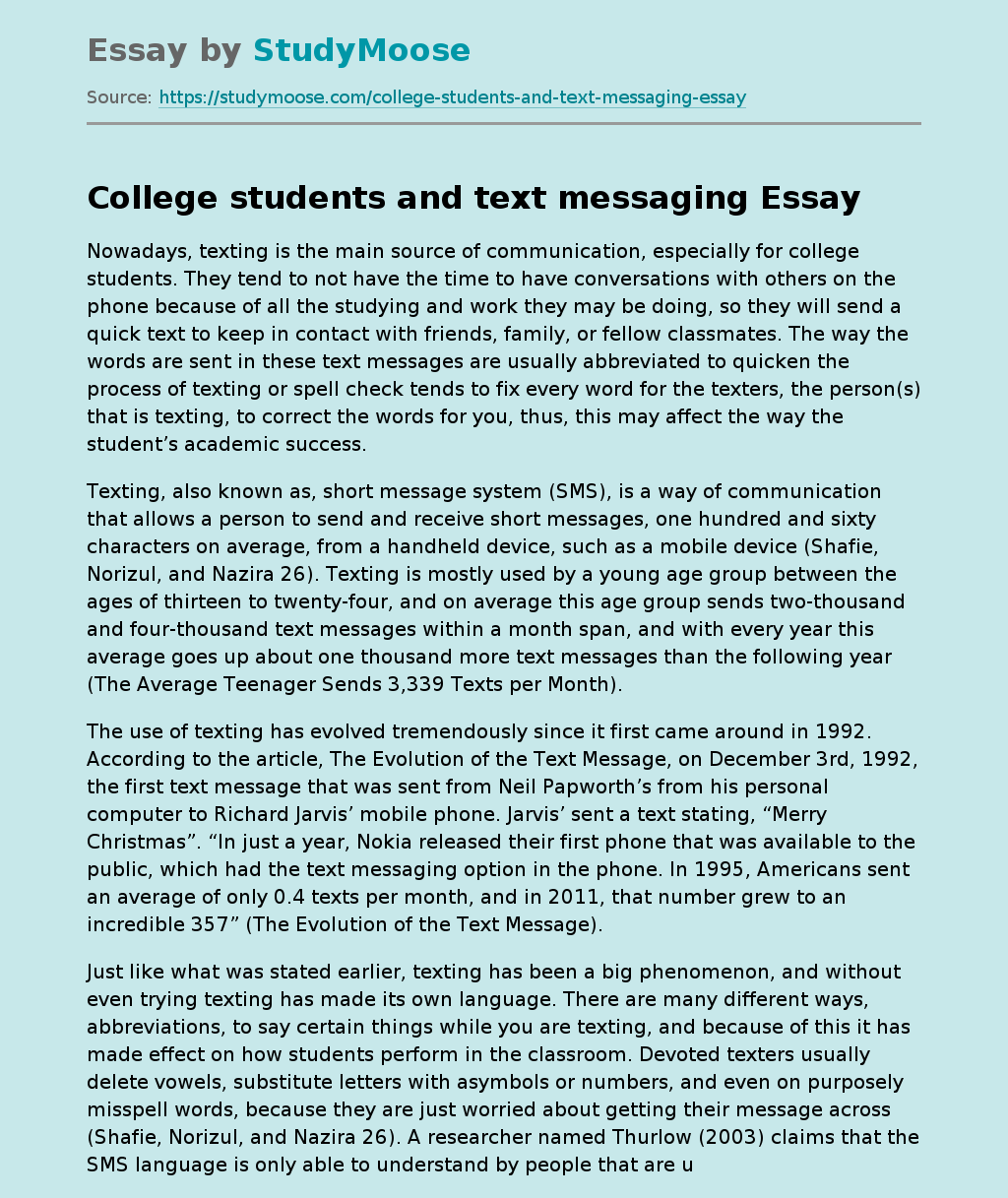