drugs and alcohol on college students

Turn in your highest-quality paper
Get a qualified writer to help you with
“ drugs and alcohol on college students ”
Get high-quality paper
NEW! AI matching with writer

In college it is extremely hard for some students to have self-control. According to the article, “Alcohol and Drug abuse”, a study indicated that 90% of students admitted to have consumed an alcoholic beverage in college, while 50% of the students also admitted to smoking marijuana. These statistics show that most students will be around drugs or alcohol at one point during their experience.

Additionally, One of the many reasons that students drink or do drugs is because it is their first taste of freedom away from home. Not to mention, no parents on their back, no rules, and you can go “home” (dormitory, apartment, house, etc…) anytime you want, why would a teen not take full advantage of this opportunity? That is one of the main issues and students do not know how to say the word as simple as no sometimes.

Not only do students get hooked on this kind of behavior but also could potentially take it too far.

Some say drinking is a stress reliever from school, work, or even personal problems. Furthermore, alcohol, as well as drugs, are very addictive and can cause many problems for one down the road. At least once a month, half of the college students in America drink or abuse drugs. A conducted survey showed around 22% of students have a higher rate abusing substances compared to the general public. Nonetheless, these students claimed they use drugs to help forget about problems and help relax and reduce stress. Since 2005, the students that claim they abuse marijuana has more than doubled, but the amount of students that claim to use alcohol has stayed average. (insert info). This sort of behavior very rarely stems from the choice made of a single individual but is mostly influenced by peer pressuring friends as a way to fit in.

Alcoholism does have an effect on the social lives of students. Some say “you are who your friends are”, in some aspects they are right. The friends chosen to spend the days with throughout college do have a significant role in a lifetime. Whatever their decisions may be, could influence the person one strives to be. The influence others can make in life seems daring and unbelievable.

Frat houses and sororities also have an impact on drinking habits developed throughout college. Greek life can be a big part of ones college experience. Membership in fraternities or sororities may play a part in drinking in college. Greek life does play a part throughout campus by typically throwing open house parties and social gatherings including none greek life students. Statistics show that greek members do more drinking than regular students and is also known as “the greek effect”. However, this does not mean that these same developed habits will stay with them following the college years. They say after students graduate and leave the college atmosphere that their studies do suggest a decrease in drinking. Once they leave they are not involved in a socially acceptable atmosphere for heavy drinking and partying. Greek life or not, drinking still raises a concern for college students.

Drugs and alcohol are huge concerns across the United States. A Harvard University study showed that underage students who drink are more likely to over abuse their tolerance level compared to twenty-one year olds, which is also the legal drinking age in America. It is unbelievably easy to access alcohol for many underage students and could be a reason to why they turn to drinking. Some could even argue that alcohol is the biggest gateway drug.

A study from the University of Florida explains why they believe alcohol is a bigger gateway drug than marijuana. The study showed that substance use begins with the most sociably acceptable drugs, being alcohol and tobacco, then proceeds to marijuana use and lastly on to other illegal, harder drugs, like cocaine. Furthermore, students who used alcohol exhibited a significantly greater likelihood up to sixteen times of illicit and licit substance use. Alcohol is what’s being put on a pedestal, so students seek it out.

When majority of students drink, they binge drink. This is one of the worst ways to consume alcohol and have harsh side effects. Campuses do not realize how harmful this is to the student body and mind. There should be more programs to raise awareness and inform students of the effects of alcohol abuse. If peers, professors or other influential members of the community see a problem within a student they should be able to refer them to counseling and seek proper help needed. Peers do play an influential role in pressuring others to party and do drugs, especially roommates.

Drinking alcohol as a young adult will more than double the chances of neurotoxicity and cause harmful cognitive effects as oppose to people that start drinking later in life. Almost every community in America is affected by underage drinking. Every year the statisitics of how young kids will start to drink increases. Children from the ages of twelve to seventeen that first encounter alcohol has increased by over one million in a span of five years. (The neurocognitive effects of alcohol on adolescents and college students).

Here are many consequences to extreme drinking. Every year there are on average 1,825 deaths from injuries and car accidents caused by people driving while intoxicated. (insert info). Assault and sexual assault chances also increase when alcohol is thrown into the equation. Studies show how poorly students perform on exams, papers, and also how far they fall behind because of acquired drinking habits. 19% of students fall into the category of alcohol dependence.

drugs and alcohol on college students. (2016, Mar 13). Retrieved from https://studymoose.com/drugs-and-alcohol-on-college-students-essay 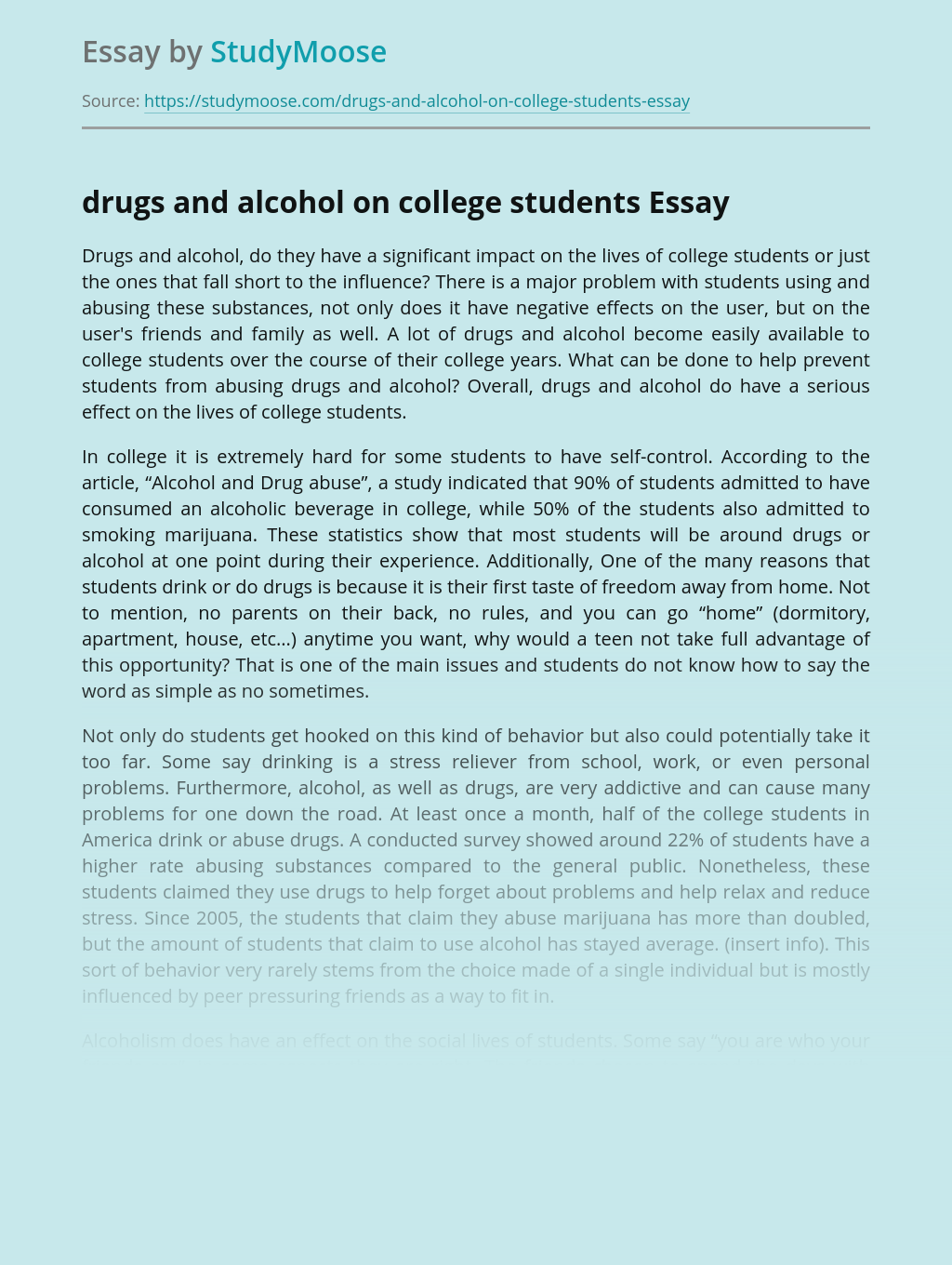 Turn in your highest-quality paper
Get a qualified writer to help you with
“ drugs and alcohol on college students ”
Get high-quality paper
Helping students since 2015
Stay Safe, Stay Original