Rhetorical analysis of an article

In a blog posting from 2007, Pharinet asserts her beliefs about the pressing modern issue of whether or not everybody should go to college. Due to the controversial nature of this topic, many well-executed rhetorical strategies are needed in order for Pharinet to convey her point and convince the reader that her argument is valid. In her article, “Is College for Everyone?” Pharinet utilizes many rhetorical strategies such as a calm, reasonable tone, nods to the opposition, and an array of personal examples to support her arguments.

Don't use plagiarized sources.
Get Your Custom Essay on Rhetorical analysis of an article Just from $13,9/Page

Firstly, Pharinet uses a calm tone to show the reader that she is passive and willing to make a reasonable argument in her favor. As is seen in the second paragraph when Pharinet states, “ . . . not every person should attend college” (635), the author is able to make simple, blunt statements and proceed to support them with facts that support her argument in a very beneficial way. After this sentence, Pharinet continues by saying that roughly 50% of student who begin college never graduate, and how the financial and academic obligations attached to college are typically too much for college-aged students (635).

These supporting facts demonstrate Pharinet’s ability to support her argument in a passive tone with straightforward facts. She is able to present questions in a way that does not lead the reader to believe that she is confrontation, but rather that she genuinely desires to communicate her concerns with her audience. She asks questions such as, “If college is for everyone, why do we rely on SAT scores and high school transcripts? Why doesn’t every school have an open admissions policy?” (635).

Pharinet is then able to answer these questions in a non-confrontational manner: “Quite simply, because not everyone should attend college” (636). She then continues on to give more explanations as to why her argument is a valid one, such as how many students at the pre-college level still struggle with reading, or how some high schools do not expect much academically from their students (636).

She is able to state simple facts without appearing to attack her opposition or the group of people being discussed. Pharinet’s ability to maintain a passive tone throughout her article heavily aids the effectiveness of her argument throughout the entirety of the article.

Secondly, Pharinet uses personal examples to support her points and to aid in her credibility. In the fifth paragraph, Pharinet accounts one of her own experiences: C’s get degrees. One of my own students said this to me when enquiring about his progress this semester. Unfortunately, this is an all too common mentality among college students.

There is no real desire for learning (636). A personal example such as this one adds a very tangible element to Pharinet’s argument. Before this example, to the reader she is simply another person writing an article and trying to voice her opinion in whatever way possible; however, after this personal example of her encounter with one of her students, the reader is shown her personal connection with the issue. This realization by the reader adds to the likability of the author and to the believability of the arguments that she is presenting. The presentation of this personal example also reveals new information about the author.

Due to this example, the reader is able to infer that Pharinet is a teacher, which would bring the reader to the conclusion that Pharinet has a personal connection herself to the issue of education. The fact that she is a teacher also lends to her credibility. Who better to discuss the issue of education than a teacher? Who could possibly be more informed on the issue than a teacher? Because of this simple recount of Pharinet’s personal interaction with the issue being discussed, the reader is able to not only connect more with the author, but the reader can also have more faith in her credibility.

There is also no doubt that every person has the right to an education. However . . .” (635). These statements demonstrate to the reader that Pharinet is not only aware of her opposition’s views, but that she agrees with a few of the arguments that her opposition might make. Pharinet also offers many alternatives for students and parents, showing that she is not just arguing to argue, but that she genuinely cares for the issue about which she is writing.

In the sixth paragraph, Pharinet suggests that some students should take a year or two off to evaluate the course that is best for them and to get more financially stable (636). Instead of just attacking the issue or blinding arguing her points, she is offering alternative suggestions that she truly believes should be taken into consideration by her audience. Pharinet’s nods to the opposition and her presentation of alternatives to starting college right away demonstrate to the reader that she genuinely cares about her topic and the issue about which she is debating.

As with any controversial topic, arguments are very difficult to make without the proper use of rhetorical strategies. Pharinet clearly realizes that fact, and she makes great use of many rhetorical strategies such as her tone and her ability to maintain her credibility to her audience. By keeping a calm and passive tone throughout the article, she is able to convey her points and arguments to her intended audience much easier than if she were only being confrontational and aggressive.

By adding personal examples, she is able to maintain her credibility and her connection to the topic and the audience. By giving nods to the opposition, she is able to yet again show her non-confrontational intent and focus on arguing her point in a manner that the reader will appreciate and to which the reader will respond well. Well-utilized rhetorical strategies are the key to any well-organized argument.

Pharinet. “Is College for Everyone?” Practical Argument: A Text and Anthology. Ed. Laurie G. Kirszner and Stephen R. Mandell. Boston: 2011. 635-636

Rhetorical analysis of an article. (2016, May 25). Retrieved from https://studymoose.com/rhetorical-analysis-of-an-article-essay 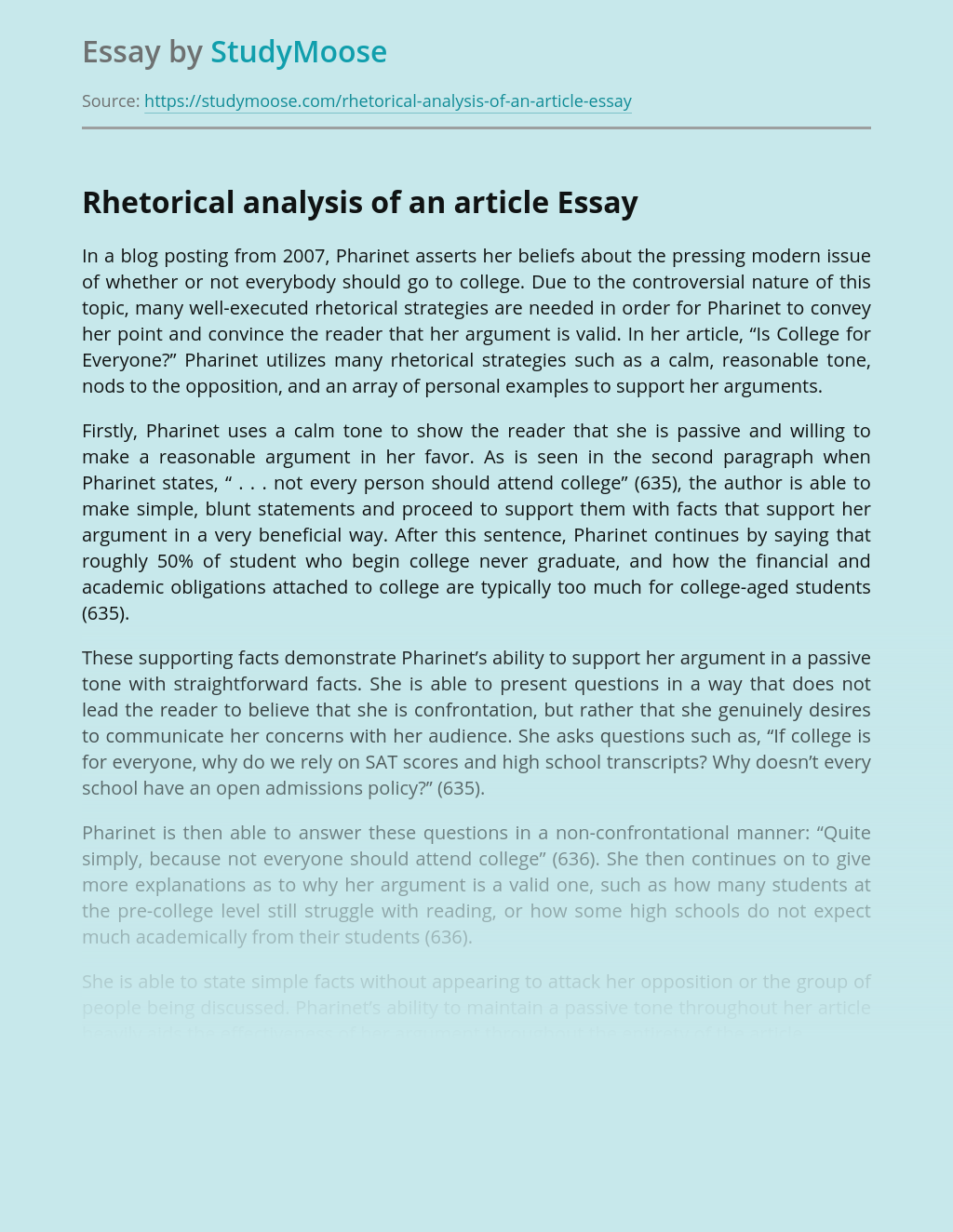 Rate this post Good morning everyone, I am Jialin Yin. Today, I want to talk about the earthquake. In 2008 May 12th, it was the first time that I felt the earthquake which was a 7.8-magnitude earthquake happened in Wenchuan China. At that time, I was a 7th grade student and sit in class room,...

Your last day on Earth

Rate this post If you knew that today was your last day on Earth what would you look back on and wish you could change? I strive to make my answer to that absolutely nothing because there isn’t anything I would regret more than living a life full of regrets, full of wishing I had...

Get Essay
Punitive Articles of the Ucmj Article 89

Rate this post “Any person subject to this chapter who behaves with disrespect toward his superior commissioned officer shall be punished as a court-martial may direct.” Context. (1) That the accused did or omitted certain acts or used certain language to or concerning a certain commissioned officer; (2) That such behavior or language was directed...

Rate this post Subjective Used art as a method of expressive self-exploration. ‘I paint in order to see.’ His artworks moved from being political protests to being focussed on the not-so-quiet intimacies of his private life. “Politics, travel, social consciousness, self-analysis, philosophical speculation and youth took second place to one over-riding obsession – to paint...