The Influence of Gender in "Girl" by Jamaica Kincaid

Jamaica Kincaid wrote a short story in 1978 called “Girl,” which was based on the advice of a mother to her daughter at a tender age. If the story was changed to “Boy,” the excerpt would completely take another turn. In “Girl,” the mother’s advice the girl on how to acquire a man, dressing appropriately, cleaning, gardening, cooking, and other life skills that she needs to learn in the male-dominated community. The mother’s advice is both negative and positive, which affects her daughter’s mentality and freedom of doing things in society.

Don't use plagiarized sources. Get your custom essay on
“ The Influence of Gender in “Girl” by Jamaica Kincaid ”
Get custom paper
NEW! smart matching with writer

The short story displays parents as overbearing with stereotypic cultural behaviors that they pass down to their generations through the daughter-mother relationship depicted. The mother teaches her daughter how to stay clean to earn her place in the society as a future submissive woman “soak your little clothes right after you take them off” (Kincaid 1). The principal focus is to the dramatic change in the monologue, roles, and speaker if the story transition to “Boy” because of the patriarchal setting where men are privileged than women, men’s responsibilities which differs from the one given to women, and the leading authority of men.

Kinkaid’s “Boy” would pick a new direction of avoiding a directive monologue but adopt a dialogue between the parent and a son because of the patriarchal setting where men are prioritized than women. In “Girl,” the mother is trying to direct her daughter on how to survive in the patriarchal environment given their submissive roles.

Because of the daughter’s lack of voice in the community, she is submissive to her mother, and she rarely interrupts her speech. When the daughter makes a speech, it is written as italics interjections, “but I don’t sing benna on Sundays at all and never in Sunday school” (Kincaid 1) which disappears in the desperate mother’s rant trying to protect her daughter from making mistakes that would lower her status in the society. However, if it was advice to a son, the story would be in the form of a dialogue between the mother and the son who is more empowered than the mother. There would be several paragraphs, quotation marks, and dialogue tags to display the speaker in the equal exchange. The boy would interrupt the parent freely, be listened to, and advised without directive like the girl.

Moreover, the story would have a significant transmutation because of the breadwinning responsibility given to the men instead of women. The wives were obligated to take care of the children, clean, garden, and take care of their husbands. The story would be different from advising the boy about his role as the head of the family. Instead of encouraging them on cooking, it would tell him his role in ensuring that they bring food. The story would talk about fishing and how to use the fish rod instead of “soak salt fish overnight before you cook it” (Kincaid 1). The boy would be told to ensure that he looks for a presentable woman to marry, and he is entitled to polygamy without question. Unlike the daughter who her mother calls her a ”slut,” the boy would not be condemned because it’s his responsibility to have several wives as he wants without getting a judgment from the discriminating society.

Furthermore, the composition of the story would change because of the leading authority of men who are entitled to be leaders in society. Therefore, the speaker would be changed from a mother to a father who understands the roles of leading. The mothers are displayed as soft beings, while fathers in the setting would be ruthless with much authority as compared to the women. The son should not be weak like girls but should be hardened to make them responsible for taking heavy duties like leadership and protecting the family. The girl was told by the mother to take care of her fragile body “don’t walk bare-head in the hot sun” (Kincaid 1). If the advice were to a son, the speaker would tell him to walk on the bare sun to harden his body to the weather because he can withstand the harsh conditions as a man and a boy he is at the moment. The father would be the best parent to advise the son who understands the patriarchal aspect better than the woman who spent her time serving and pleasing men and precisely her husband.

To conclude, writing the “Girl” to advise the boy would need a different set of skills from a male perspective instead of the woman’s perspective used to narrate the Kincaid monologue. The writer would be required to understand that the male dominates in this culture and the roles they play to make the women feel demeaned and submissive to them. Therefore, the mother would talk to a son differently than she is ordering her daughter without listening to what she has to say to defend herself or express her emotions. The story would be different because of the patriarchal setting, the roles by men, and the perspective of men as hardy individuals with freedom of making decisions in leadership. The men are expected to get an education, take careers, and breadwinning while women are to stay at home and care for the families. The Caribbean mother gives her daughter restriction rules before getting to adolescent “don’t sing benna in Sunday school” (Kincaid 1), which would not be applied to a son because of their empowerment.

The Influence of Gender in "Girl" by Jamaica Kincaid. (2020, Sep 09). Retrieved from https://studymoose.com/the-influence-of-gender-in-girl-by-jamaica-kincaid-essay 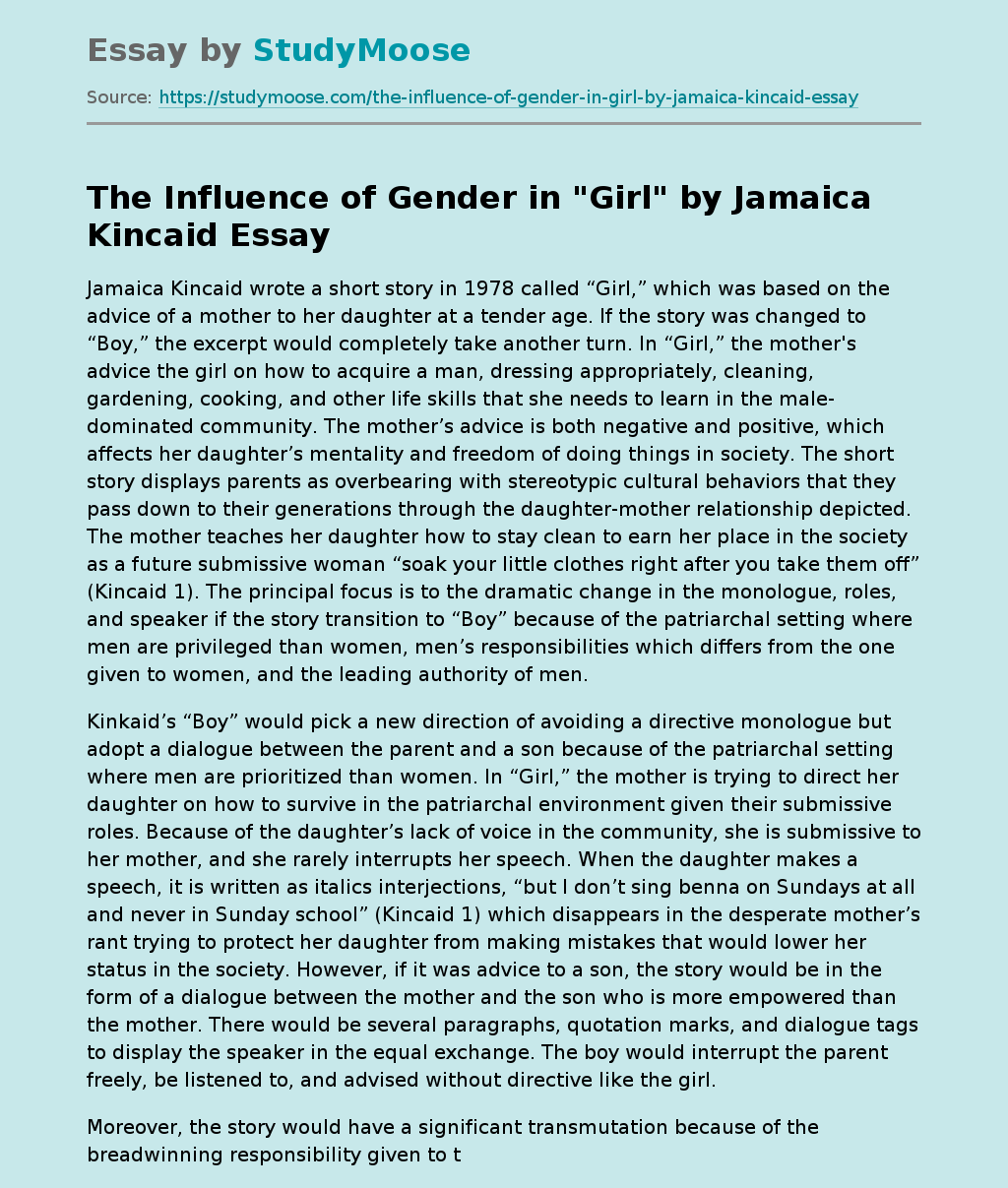