If one were talking about a beloved, one would go out of one’s way to praise her and point out all of the ways that she is the best. However, in William Shakespeare’sSonnet 130, Shakespeare spends the poem comparing his mistress’s appearance to other things, and tells the reader how she doesn’t measure up to the comparisons. While using the standard Shakespearean iambic pentameter with a rhyme scheme of AB-AB/CD-CD/EF-EF/GG, he goes through a laundry list, giving us details about the flaws of her body, her smell, and even the sound of her voice.

Yet at the end of the poem, he changes his tune and tells the reader about his real and complete love for her. Shakespeare’s Sonnet 130 takes a turn from the cliché love poems of his time by mocking the common comparisons and telling the truth about his lover’s appearance. The first quatrain briefly describes the woman’s physical appearance by using comparisons to nature.

By avoiding a direct simile, Shakespeare gives the reader a strong mental image of sparkling white snow and lays it next to the equally vivid image of dun (grayish-brown) breasts.

“Dun” is often used to describe the color of an animal and is not the kind of thing a woman would like her breasts to be compared to. Throughout the second quatrain, the speaker continues to criticize his mistress’ appearance and breath. Shakespeare says, “I have seen roses damasked red and white,/ but no such roses see I in her cheeks” (5-6). White, red, and damasked were the only three colors during the poem’s time period. The speaker says he has seen roses separated by color (“damasked”) into red and white, but he sees no such roses in his mistress’ cheeks. The use of the word “damasked'” encourages Shakespeare’s criticism that his mistress is not like the rest of the women. The speaker also says, “And in some perfumes is there more delight/ than in the breath that from my mistress reeks” (7-8).

The word “reeks” promotes a strong image of just how far from perfect this woman is and forces the reader to take a look at the definitions of female beauty. The word was not as suggestive of unpleasant exhalations as it is nowadays, but it tended to be associated with steamy, sweaty and unsavory smells. The expression is relative with the earlier description of dun breasts. The third quatrain is a shift from the previous quatrains that describe what the mistress is not by describing her voice and contrasting her to a goddess. Shakespeare says, “I love to hear her speak, yet well I know/ that music hath a far more pleasing sound” (9-10). In these lines, the speaker draws on a more cultural image, comparing music to his mistress’ voice. He is saying that he literally loves to hear her voice, even though he knows that music is much more pleasant to hear. Alliteration is used in line 11 to emphasis the woman’s gait when the speaker says, “I grant I never saw a goddess go” (line 11).

He also says, “My mistress, when she walks, treads on the ground” (line 12). In ancient times, a mortal was able to recognize a goddess by her particular manner of walking. The speaker could be talking about her graceless gait but could also be commenting on the fact that she is not a goddess and walks the earth like any other woman would. William Shakespeare’sSonnet 130 takes a turn from the cliché love poems of his time by mocking the common comparisons and telling the truth about his lover’s appearance. In the couplet, the speaker shows his full intent, which is to insist that love does not need conceits in order to be real, and women do not need to look like flowers or the sun in order to be beautiful.

The exaggerated comparisons make this sonnet enjoyable because the reader is constantly wondering if the speaker hates his mistress or is simply being witty. I chose this poem because I appreciate Shakespeare’s approach in writing this love poem, and I continuously enjoy the poem no matter how many times I re-read it. The satiric tone and use of metaphors were the most successful elements of the poem, with no unsuccessful elements, in my opinion. Sonnet 130 plays an elaborate joke on the conventions of love poetry common to Shakespeare’s day, and is so well perceived that the joke remains humorous today. 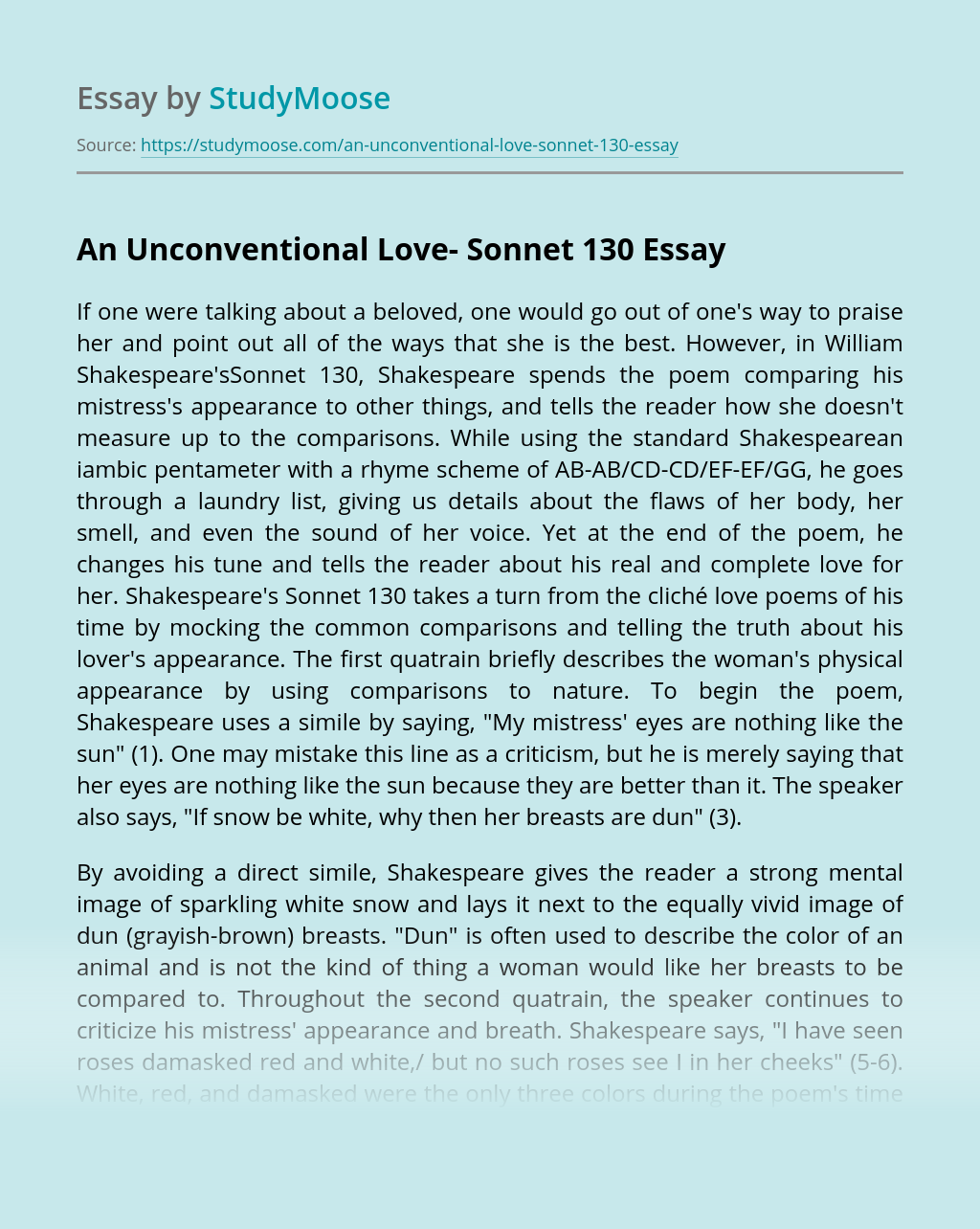 Don’t waste time
Get a verified writer to help you with An Unconventional Love- Sonnet 130
Hire verified writer
$35.80 for a 2-page paper
Stay Safe, Stay Original