“Change what you see by changing how you see” (Huie). This quote relates to “Sonnet 130,” by William Shakespeare and “Ars Poetica,” by Archibald Mac Leish. Sonnet 130 is about the faults of his mistress, but realizes by the end of the poem, that his love is all that matters. This man did not see his mistress as an ugly woman, but instead saw her as someone whom he loves dearly. In a different way, Ars Poetica states that “a poem should not mean, but be” (MacLeish 23).

Don't use plagiarized sources. Get your custom essay on
“ Comparing and Contrasting Sonnet 130 and Ars Poetica ”
Get custom paper
NEW! smart matching with writer

People who read a poem may try to interpret its real meaning, but there is really nothing to interpret. A poem should just mean what it says. Although both “Sonnet 130,” by William Shakespeare and “Ars Poetica,”by Archibald MacLeish have similar themes such as simplicity, and similar devices such as using imagery to describe beauty and nature, they have different meanings, since one poem seems to expect a considerable amount from a mistress, and the other poem expects nothing of a poem.

One similarity between “Sonnet 130” and “Ars Poetica” is their themes of wanting nothing but simplicity in a poem and a mistress (stated in the last couplet), and love and adoration. When reading “Sonnet 130” one might think that this man spends his time complaining about his mistress, and clearly dosen’t love her, however, by the end of the poem he realizes that his mistress may not be beautiful, but their love is beautiful, and that is all that matters. “And yet, by heaven, I think my love as rare” (Shakespeare 13).

As was said before, a poem is not something people should over analyze, it should just make you feel the way it does. Almost ike a painting or sculpture, a poem is not a puzzle, but a mood or a feeling. Both poems seem to have different views on what to expect from a mistress/poem. In “Sonnet 130,” Shakespeare expects a great deal of things from his mistress. There are twelve lines discussing the disappointment of his mistress’ eyes, lips, hair, cheeks, breath, voice, and how she walks. Lines such as her eyes “are nothing like the sun” (Shakespeare 1), her lips are less red than coral, and her hairs are like black wires growing on her head, show how displeased he is at these unattractive qualities. “Ars Poetica” is completely different in this way. MacLeish says, “A poem should be palpable and mute” (1), and “Dumb as old medallions to the thumb” (3).

These words demonstrate how he believes that poetry should be different than what society expects them to be. He wants nothing of a poem, but just believes that poems should be whatever they want to be. Another similarity between “Sonnet 130” and “Ars Poetica” would be that they both use imagery to compare beauty and nature. “Sonnet 130” used this device, to demonstrate the nature of beauty through imagery. “I have seen roses damask’d, red and white, but no such roses see I in her cheeks” (Shakespeare 5). This compares his mistress’ cheeks to the beauty of a rose.

“Ars Poetica” has many lines that use imagery, one of which compares words to the flight of birds, “a poem should be wordless as the flight of birds” (MacLeish 7). Both writers did an impeccable job using imagery to enhance the readers understanding and use descriptive words to make the poem more beautiful and interesting sounding. “Ars Poetica” and “Sonnet 130” are similar in the way that they both have a similar theme of simplicity and adoration. “Ars Poetica” wanting a poem be in it’s simplest terms and wanting it to mean only just what it says.

Although in “Sonnet 130” Shakespeare does seem to expect a lot from a mistress, he states at the end of the poem, that he wants nothing more than the mistress he has. Another similarity is that they both compare beauty and nature. This device was used purely to entice the reader, and make it easier for the reader to understand. One essential difference between both poems, would be that in “Ars Poetica, the poet strongly believes that a poem should be “wordless” and simple, almost careless. However, in “Sonnet 130,” Shakespeare spends most of the poem taking about his mistress’ unattractive qualities and seems quite expectant of a number of things. Analyzing these key similarities and differences are what help the reader understand the poem in a more analyitical way. 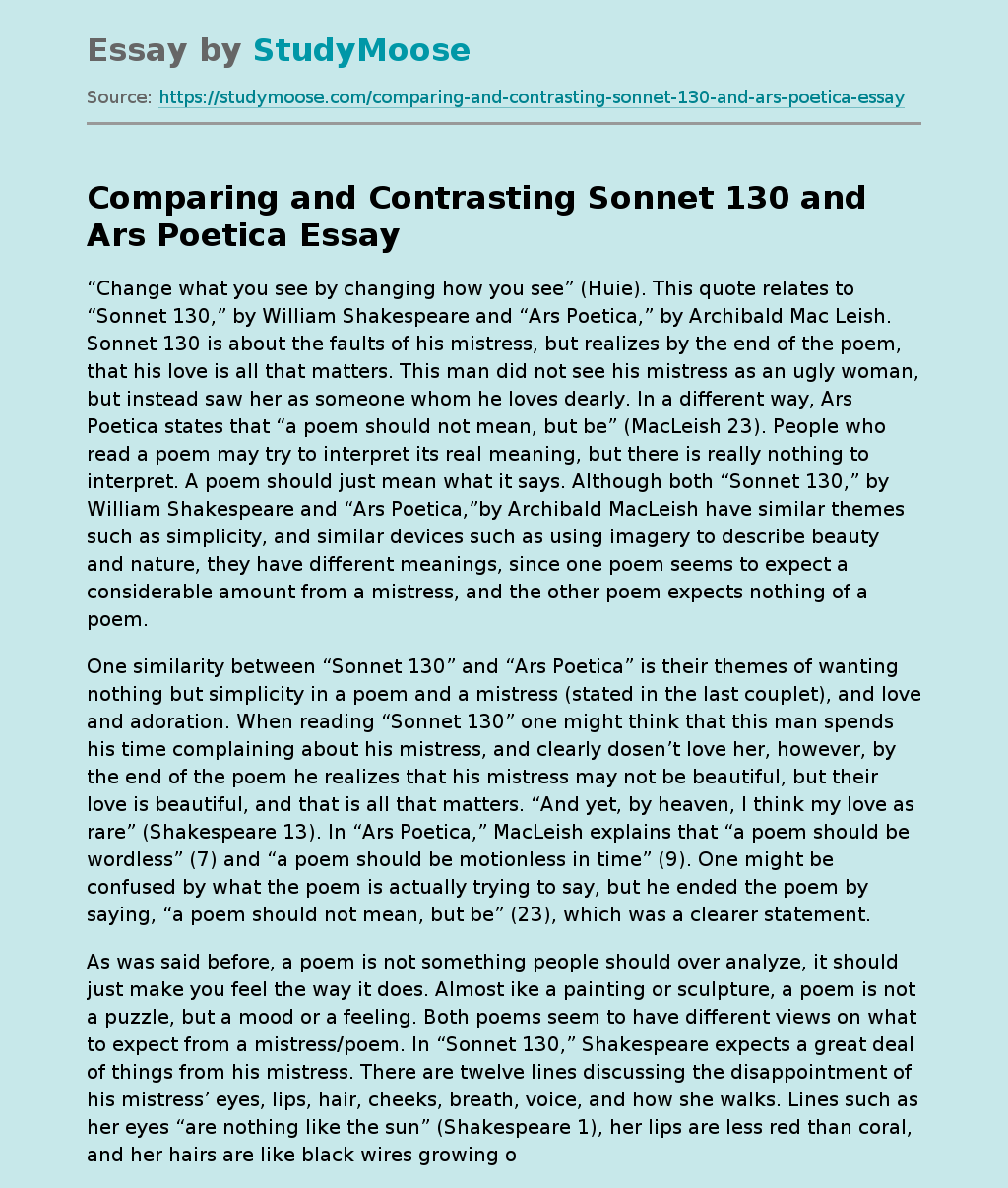