The Struggles of Immigrants in the United States and the Search for Identity in The Latin Deli: Prose and Poetry, a Poem by Judith Ortiz Cofer

Immigration is a very hot topic in American politics today. With a presidential candidate who literally wants to build wall around the southern border, it’s hard to find anyone here who does not have an opinion on the matter. But how often are Americans able to hear the perspec tives from the immigrants themselves? Mainstream media and society has a tendency to marginalize and silence minority cultures throughout the country, and this is something that au thor and poet, Judith Ortiz Cofer, discuss frequently in her work.

Don't use plagiarized sources. Get your custom essay on
“ The Struggles of Immigrants in the United States and the Search for Identity in The Latin Deli: Prose and Poetry, a Poem by Judith Ortiz Cofer ”
Get custom paper
NEW! smart matching with writer

Judith Cofer Ortiz was born in Hormigueros, Puerto Rico in 1952, but moved to Paterson, New Jersey when she was just four years old (Acosta-Belen). This lifestyle change would ultimately makes its way into her works of poetry, essays, and fiction as the influence for her most renown themes. A large theme is the struggles of an immigrant in the United States, and how it is not easy to simultaneously preserve one’s original culture and assimilate to a new one.

Theses searches for identity are discussed in her poem, “The Latin Deli: An Ars Poetica”. Published in 1993, this poem can still be relevant to day as one considers the weight that assimilating to a brand new culture can weigh on someone.

The poem is about a deli that specializes in latino produce, which readers can allude to by the title, but there is more beyond the surface. The second part of the title, which translate to “The Art of Poetry”, is the main focus of the poem and says that there is something poetic and artful about this deli.

Ortiz Cofer describes the deli through its customers’ perspective: a spiri tual, nostalgic, and comforting place. Its counter is like an altar with its effigies of the Virgin Mary and her infant son, and stalks of plantains that hang “like votive offerings”, and the woman standing behind the counter is referred to as “the Patroness of Exiles” (Lines 2, 4-6). At this deli, Spanish is spoken and in turn connects the varieties of customers that come into it: Puerto Ri cans, Cubans, and Mexicans. In the poem the foods are called by their Spanish names, and are personified as lost lovers (Lines 26-28). The woman is the main subject of the deli and without her there would not be half the magic. Ortiz Cofer shows with two of the three sentences in the poem containing how she “spends her days”. She is the one who must make impossible deals to find the items that mean so much to these people. She is the one who listens to their rants and stories, and accepts and understands unlike in places elsewhere. In this piece specifically, readers can identify the three themes of homesickness and nostalgia, the importance of culture, and how our cultures shape our identity.

Although there are places like the deli that are supposed to generate the same feelings from their homelands, nothing can beat the real thing. Many of the deli’s customers appear to be first-generation immigrants and can still vividly remember what it was like before they came to the United States. Our Patroness overhears the Cubans’ speeches about when they will go back to Havana in a “glorious return” (Line 14). But the glory is not felt by the readers, because Ortiz Cofer adds afterwards that it is a place “where no one has been allowed to die and nothing to change until then.” This implies that the Havana they speak of has never and will never exist, but they nevertheless continue to preach on because it gives them a positive light to look towards when times are rough here in the States. The physical description of the woman is another exam ple of the familiarity the immigrants search for. Her face is called a “family portrait”, meaning that she probably shares the same qualities found in many Latina women. While listening, the woman is also said to be selling “canned memories”, which stands as the produce. Nostalgia is evoked through these foods, like how the merengue sweets were whispered by the customers as if they were “lost lovers” from their childhood.

While they cannot exactly bring the feeling of latin America to their everyday lives, the deli is somewhere they can rest from the laboring attempts to assimilate into this new culture and be surrounded by the familiarity of their first culture. Ortiz Cofer refers to the Spanish spoken there as a “comfort”, because outside of the home there are few places where speaking Spanish is common and used as a primary language. She also uses the Spanish names of the foods in the poem to further immerse the reader in what the deli means to these immigrants. Jamón y queso means something entirely different to the latino/a immigrant than the regular ham and cheese. From what is known about immigrants, they usually begin life in America with little money to spend on luxuries. Yet this difference is so important to them that they are willing to pay more for it, and readers realize this when Ortiz Cofer explains that ham and cheese would cost less at an American supermarket, but yet it does not stop the old man from bringing his grocery list to the deli (Lines 31-33). She even compares the way he reads the woman his list to the way that someone would read poetry (Line 35). This is a direct example of the message Ortiz Cofer is im plying of the artfulness found in places like a latin deli.

As the poem is divided in two different languages, it is also argued that the nation is di vided by theses cultures, as Samuel P. Huntington writes in his article, “The Hispanic Challenge”. He sees the refusal to completely assimilate to the American culture as a damaging division (Huntington). Ortiz Cofer, in contrast, shows that there is unity in the celebration and practice of Hispanic culture within the varieties of Latin immigrants. The author herself was born in Puerto Rico, but adds different Latin backgrounds in her poem (Lines 10-16). They come together over the pleasure of hearing spoken Spanish, which explains why Ortiz Cofer uses the term “all” in line 18. And to further refute Huntington’s claim, it is hard for immigrants to assimilate partly be cause Americans are not always welcoming. In other words of Ortiz Cofer’s, like “Don’t Call Me a Hot Tamale”, readers evaluate the act of pigeonholing a person. Tom Rademacher even makes the connection of it to racism in an essay (Rademacher). This can also be seen in “The Latin Deli” when the author refers to the immigrants as “exiles” and their access to their culture as “close ports” (Lines 8, 40).

Because this poem has so much emphasis on culture, it is also easy to make connections from the poem to the formation of identity. In a sense, the poem parallels the author’s personal experience with the relationship between culture and identity. Throughout her childhood, she would often spend long amounts of time at her grandmother’s home in Puerto Rico while also living in New Jersey (Acosta-Belen). This may explain the crisis Ortiz Cofer describes in her work in her search to find out who she is. She is not just Puerto Rican, nor is she solely Ameri can. Therefore a conflict arises in the poem. In the description of the woman, Ortiz Cofer writes that she is “of no-age”. This absence of a simple characteristic reflects Ortiz Cofer’s own struggle in filling in her “simple” characteristic: her ethnicity. In the article, “Culture Shock Leads to Iden tity Crisis: A Culture Study of Judith Ortiz Cofer”, Thalia Ramirez claims that she also displays this war between the two with a war between the two languages. Ortiz Cofer writes that the Mex icans are talking about dólares, not dollars, that they will make in El Norte (Line 16). Not only is she showing the difference here in just the words, but also in the value of a dollar to a natural cit izen and an immigrant.

In summary, while an old deli may not be given a second thought to the mainstream soci ety in the United States, it is a haven for these Latin lifestyles. Its making are spiritual, its em ployee is the heroine of the poem, and its customers come to breathe in the Latin air around it with words in Spanish and of their goals and wishes for the future. It is a place they can retreat to when they are feeling homesick, somewhere they can go they will spark fond memories of a time in a land before. A time that was spent of different soil, living different lives, eating different foods that may also magically appear at the deli, thanks to the Patroness of Exiles. She and her deli preserve a culture that thousands of immigrants from various countries can identify with, es pecially when they cannot seem to identify with anything in the United States. “The Latin Deli” is a tribute to Ortiz Cofer’s Latin culture, and is a love note in Spanish.

The Struggles of Immigrants in the United States and the Search for Identity in The Latin Deli: Prose and Poetry, a Poem by Judith Ortiz Cofer. (2021, Sep 21). Retrieved from https://studymoose.com/the-struggles-of-immigrants-in-the-united-states-and-the-search-for-identity-in-the-latin-deli-prose-and-poetry-a-poem-by-judith-ortiz-cofer-essay 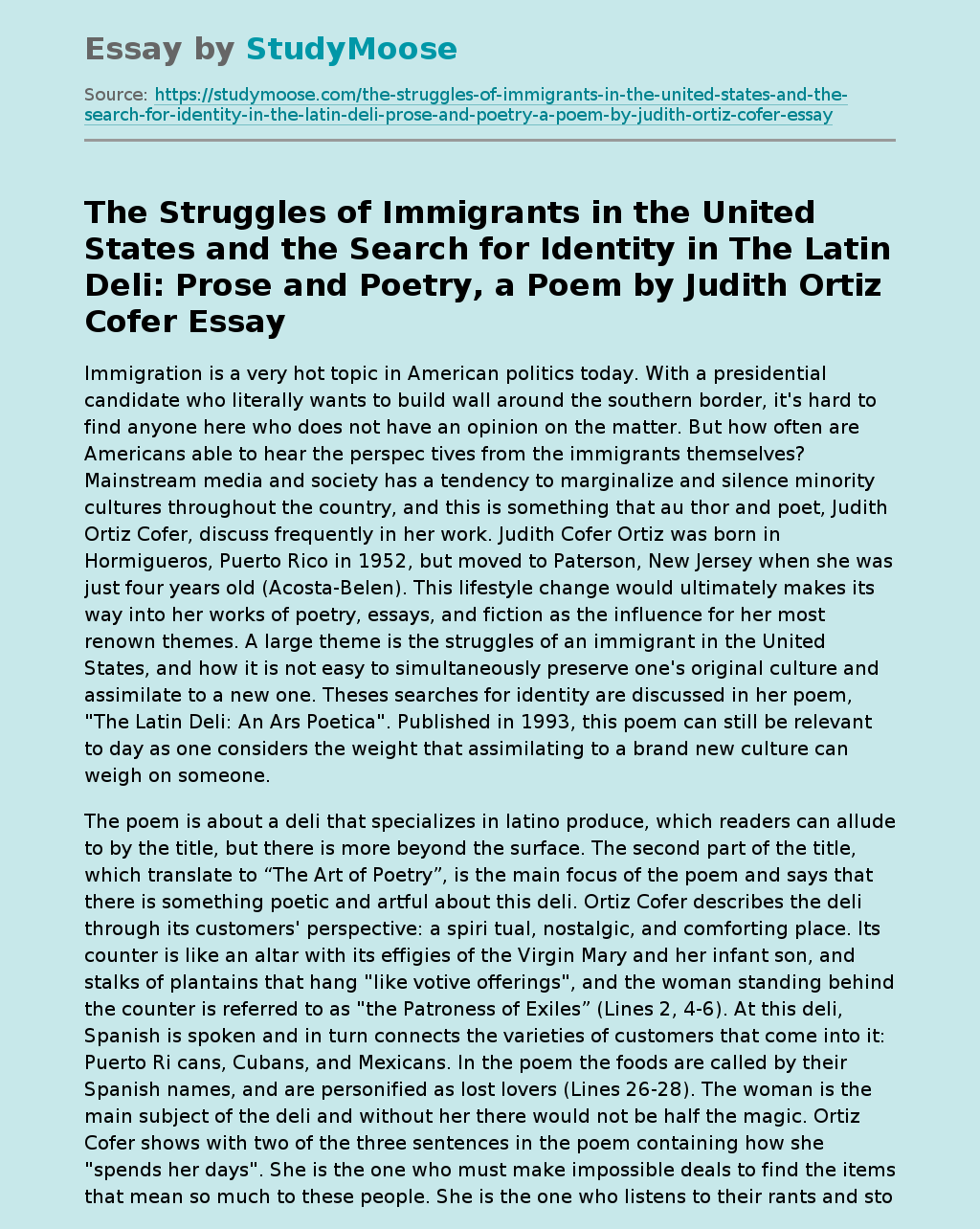