Comparison of Valentine and Sonnet 130 by William Shakespeare

Compare and contrast the way in which love is presented in the poems ‘valentine’ by Carol Ann Duffy and ‘sonnet 130’ by William Shakespeare.

In this essay I am going to compare and contrast the way in which love is presented in the poems ‘valentine’ by Carol Ann Duffy and ‘sonnet 130’ by William Shakespeare. I will be drawing links of comparison and will explain the similarities and differences between them.

The first poem ‘valentine’ was written by Carol Ann Duffy. It has no set rhythmic pattern and the stanzas are all different lengths.

Turn in your highest-quality paper
Get a qualified writer to help you with
“ Comparison of Valentine and Sonnet 130 by William Shakespeare ”
Get high-quality paper
NEW! AI matching with writer

There are 7 stanzas in total. The title of the poem Valentine’ sounds very romantic and suggests that the poem is about hearts and roses and other items linked with the word valentine, however, once the first line is read this assumption is wiped away. The word satin from the first line ‘not a red rose or a satin heart’ immediately makes the reader think of a romantic gift that is soft to the touch and quite luxurious.

However the line starts with ‘not’ suggesting that she is not going to give her lover a normal valentine present. This line is on its own which could mean that it is important and has been left on its own to stand out to the reader.

By saying that it is a ‘moon wrapped in brown paper’ it makes it sound like a present or a package waiting to be unwrapped.

The third stanza starts with a one worded line-‘Here’. This is short and concise and calls the reader’s attention away from the description of the onion and starts to say what the onion would do. The next line, ‘It will blind you with tears like a lover’, connects the onion to love and compares the way an onion makes you cry to how love can make you cry. The word ‘blind’ is used as when people cry their eyesight becomes blurred and put off. The stanza ends by saying ‘it will make your reflection a wobbling photo of grief’. This is because when you have been or are about to cry water build up in your eyes and makes you vision go wobbly and blurred.

The next two stanzas are each only one line. The first reads ‘I am trying to be truthful’. The word ‘trying’ suggests that it is the thought that counts and her gift of an onion has a lot of importance. ‘Truthful’ could indicate that she wants to give a present that means more than a typical valentine present. The second stanza ‘not a cute card or a kissogram’ is also only one line. This could be because the writer wanted to make an impact on the reader and wanted the line to stand out. The line links to the first stanza of the poem through the repetition of the word ‘not’. It is also saying the same thing – that she is not giving her lover a typical valentine gift, such as a ‘cute card’ which holds no importance or meaning.

The sixth stanza begins with the use of repetition as it repeats the line ‘I give you an onion’ used in the beginning of the poem and refers back to the poems meaning. It could also suggest that carol Ann Duffy felt strongly about giving the onion and it held a lot of importance to her. The next line ‘its fierce kiss will stay on your lips’ implies the onion brings everlasting love. The word ‘fierce’ relates Duffy’s passion to her lover, with an onion and by using the word ‘kiss’ she brings a romantic and passionate atmosphere to the stanza.

The taste of an onion is sharp and stays on the lips for a long time, similarly to a kiss which is remembered and can be felt on your lips a long time after as it is an important part of the relationship. The following line is only three words ‘possessive and faithful’ and is describing the kiss using very powerful adjectives that make an impact on the reader. She is saying that it is not an ordinary kiss but one with a deeper meaning which relates to an onion and how it leaves a strong taste on your lips. Duffy ends the stanza with ‘as we are, as long as we are’ stating that she hopes her love will last forever however know that it may not.

The final stanza of the poem starts with a short line that reads ‘take it’. This is left on its own to stand out to the reader and is in a commanding tone. It shows that it is important to Duffy that her lover takes the onion. The consecutive line ‘its platinum loops shrink to a wedding ring’ refer to the loops of an onion that get smaller as you go up the onion. By using the word ‘platinum’ which is very precious she is making the onion seem much more valuable than it is. ‘If you like’ then changes the tone of the poem as she is giving her lover a choice whereas in the first line she was ordering him. The nest line ‘lethal’ is saying that love can be dangerous and it has been left on its own to stand out to the reader. The final two lines are ‘its scent will cling to you fingers, Cling to your knife. The word ‘cling’ sounds like it will not let go.

The next poem, sonnet 130, was written by William Shakespeare. Unlike ‘valentine’ there is a set rhythmic pattern in the beginning of the poem (ABABCDCDEFEFetc.) however changes to rhyming couplets in the last two lines to make them stand out and show their importance to the reader.

‘Sonnet 130’ like ‘valentine’ also compares love with strange objects for example; he describes his mistress’s hair as ‘black wires’ which is not normally associated with beauty. It suggests that her hair is thick and wiry. Throughout the poem he criticises her in this way. By doing this he could be suggesting that beauty isn’t only skin deep and there is more to a relationship than looks. He believes that his love for her is rare and he accepts how she looks in an honest way because he loves her.

Shakespeare also uses strong and powerful words, like ‘valentine’, however uses it differently. While Duffy uses words such as ‘possessive’ to describe an onion, Shakespeare uses words like ‘snow’ or ‘roses’ which create imagery. These words can be used by the reader to create their own image in their mind. Most of the words he uses such as ‘sun’, ‘snow’ or ‘roses’ represent good things and relate to happiness. However he says that his lover is the opposite of all theses things and therefore the reader creates a negative image of his lover in their head.

He also uses juxtaposition but in a different way to carol Ann Duffy. Duffy uses juxtaposition by comparing love with an onion throughout the poem however in ‘sonnet 130’ Shakespeare uses juxtaposition in each line, contrasting objects with positive imagery with his mistress however saying that she is the opposite of them, for example, ‘but no such roses see I in her cheeks’. Shakespeare juxtaposes beauty to ugliness which makes this line effective. This contrast changes the tone of the poem. Roses are used to represent beauty and delicateness, however Shakespeare juxtaposes this by saying the woman does not remind him of roses. This suggests that his mistress is not beautiful.

To conclude, I feel that ‘valentine’ was a much more effective poem as Duffy managed to get a lot of meaning out of just an onion and she used a lot of powerful language such as ‘possessive’. She also used many metaphors and similes and although the poem did not rhyme, the range and different lengths of stanzas had a good effect as it made certain things stand out. ‘Sonnet 130’ was also an enjoyable poem to read as it had a good rhythm throughout and had a lot of deep meanings to it. It also had good use of juxtaposition and the words used helped created imagery inside the readers mind. However, it was not as interesting as ‘valentine’ and did not express as much emotion.

Comparison of Valentine and Sonnet 130 by William Shakespeare. (2017, Sep 27). Retrieved from https://studymoose.com/comparison-of-valentine-and-sonnet-130-by-william-shakespeare-essay 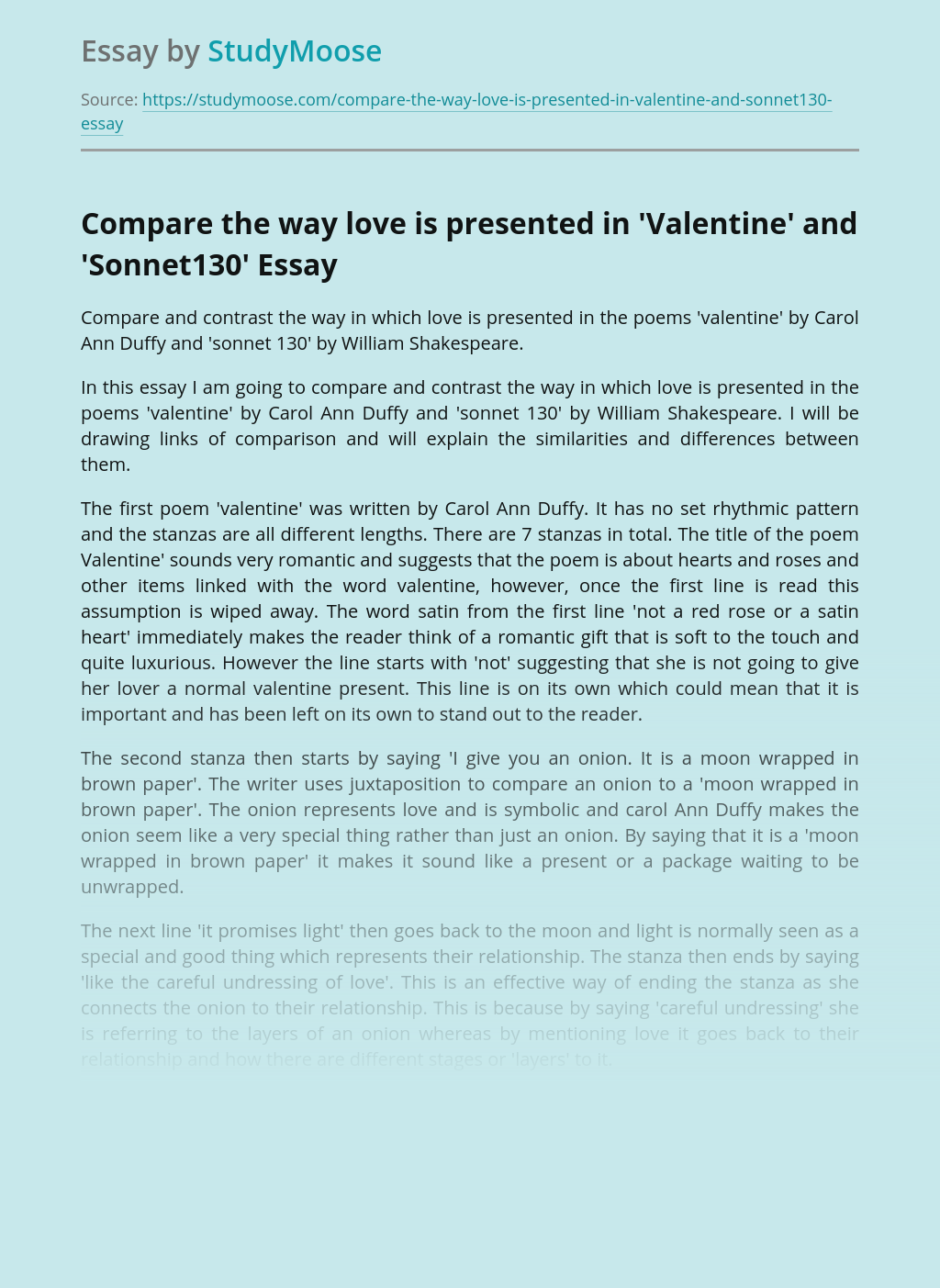 Turn in your highest-quality paper
Get a qualified writer to help you with
“ Comparison of Valentine and Sonnet 130 by William Shakespeare ”
Get high-quality paper
Helping students since 2015
Stay Safe, Stay Original