“In the deeper layers of the modern consciousness, all means are unlawful, every attempt to succeed is an act of aggression, leaving one alone and guilty and defenseless among enemies: one is punished for success.”

This is a quote from the famous essay “The Gangster as Tragic Hero”, a “classic example of film criticism and cultural analysis”. The essay was published for the first time in 1962 in Robert Warshow’s book “The Immediate Experience”. In it the author examines some of the generally accepted conventions that most gangster movies follow and draws conclusions from them about the reasons and the way this genre appeals to the audience.

Don't use plagiarized sources. Get your custom essay on
“ Robert Warshow’s “The Gangster as Tragic Hero” ”
Get custom paper
NEW! smart matching with writer

The quote represents one of the main ideas of Warshow’s argument – it shows the attitude of the mass public towards success. According to Warshow, we need to be able to “acquiesce in our failure”. He says that we have one intolerable dilemma: “failure is kind of death and success is evil and dangerous, is – ultimately – impossible”, and the resolution of this dilemma by the gangster’s death makes us feel safe.

He also argues that the gangster is doomed “because he is under the obligation to succeed” and claims that “he is what we want to be and what we are afraid we may become”. The author gives us the reasons for the inevitable failure of the gangster. These are “the very conditions of success”.

He states that success is established by imposing the individual on the others, by drawing himself out of the crowd.

And what dies is not some anonymous man but “the individual with a name, the gangster, the success”. The gangster is doomed for his attempt to be something more, to be above the others, above the crowd. But the general public is “the crowd”. Most of us are ordinary people with everyday lives. We all dream of being successful but in most cases we are not. And that’s why we need the gangster. To help us cope with our failure. He exemplifies the impossibility of success. Now “we can choose to fail”.

One of the best illustrations of this view about the gangster movies is Brian DePalma’s 1983 remake of “Scarface”. In it Tony Montana, portrayed by Al Pacino, who starts from being kept in a camp for Cuban immigrants, gradually becomes one of the biggest mafia bosses with enormous million-dollar profit. But then follows the inevitable failure. He has a break up with one of his partners who send people to kill him. He kills his best friend and his sister for having an affair. Even his wife leaves him. At the end we see him alone against the whole world. At the end he fights alone and dies alone – a typical Warshow type of gangster.

There is one particular scene that exemplifies the beginning of the end. After this scene we all know that Tony Montana is doomed. It takes place in a fancy restaurant. He is shown drunk and on drugs. First he has a fight with his wife and she leaves. Then he overturns the table and addresses the people in the restaurant, who watch him astounded and appalled:

“You’re all a bunch of fuckin’ assholes. You know why? You don’t have the guts to be what you wanna be. You need people like me. You need people like me so you can point your fuckin’ fingers and say, “That’s the bad guy.” So – what’s that make you? Good? You’re not good. You just know how to hide… how to lie. Me, I don’t have that problem…I tell the truth even when I lie.”

Not only “Scarface”, but all the classic examples of gangster movies follow the concept set by Robert Warshow. Movies like the “Godfather” trilogy, “Goodfellas”, “Casino”, “Carlito’s Way” are all maintaining the idea that in modern society all means of success are unlawful and one is punished for success. They show the attitude of the audience, the experience of the gangster, universal to Americans.

But we must take into consideration that “Casino” is the last really big hit in the genre that follows Robert Warshow’s conventions. In the years after that the genre starts to change and lose its popularity. And even “Casino” doesn’t end as it’s supposed to because only one of the two main gangster characters, Nicky Santoro, dies. Sam Rothstein only has to retire, going down in the ranks.

The next movie of such popularity after “Casino” is “Donnie Brasco” (1997), which changes “the fixed pattern” Warshow is talking about. The destiny of the gangsters at the end is the already known inevitable death but the main character is not a gangster. The main character is a policeman sent under cover to break up the crime organization known as “mafia”. And he succeeds not only in this undertaking, but also in climbing up the ranks in the organization. The audience is supporting him all the way through the movie in his success as a gangster at first and after that in the effective results of his task as a police officer. In this case the main character is not punished for success as he is supposed to be according to Warshow (because “all means are unlawful, every attempt to succeed is an act of aggression”). He is praised instead. Once in the movie, being promoted for the work he’s done and second time in real life by the audience, which is hailing his success against the “bad guys”.

With the next gangster hit the situation is changed even further. This time the audience sympathizes with and supports the gangster himself. This is the case with the still ongoing super famous TV hit “Sopranos”. And the main representation of Tony Soprano is not as a man drawn out of the crowd but as an ordinary man. He no longer lives in that imaginary city that Warshows’s gangster inhabits. The modern gangster lives in the suburbs, just like every other successful man nowadays. In this case, being a mafia boss is shown as a business almost as being a manager of a large organization. We follow him not only in his success, but also in his problems with his personal life and with his job. In his therapy sessions he seems alone and alienated from his family. The implication here in social terms is that man is not above the crowd even when he’s successful. He is part of it, with the everyday problems and dilemmas, with his own personal dramas. His image as a family man with troubled marriage and problematic son helps us feel Tony Soprano closer to our world.

The careful examination of Robert Warshow’s essay “The Gangster as Tragic Hero” as a cultural analysis and the attempt to apply it as such in our contemporary society give us the possibility to see the changes in the attitude of people towards the “bad guy”, towards success and the way it is displayed through the years, expressed in the gangster movies. We can follow all the way from Tony Montana, who we are supposed to fear and despise, to Tony Soprano, who we are supposed to sympathize with. The beginning is with the idea that “one is punished for success”. The view of success is as something “evil and dangerous”, something impossible, something separating us from “the crowd”, leaving us “alone and guilty and defenseless among enemies”.

When trying to work out one’s way to the top, “all means are unlawful, every attempt to succeed is an act of aggression”. And the end is the now established view that even successful we are still part of “the crowd”, because the successful people have the same problems and dilemmas in their professional and private life as any other person. They are just people after all. The difference is that they achieved something we dream about. They succeeded. But we are appeased by the knowledge that success can’t make you happy.

So the question is not if we succeeded or we failed but if we are happy. And here’s the point that Robert Warshow makes, which is still valid today. That “America, as a social and political organization, is committed to a cheerful view of life.” And the opposition to this view, to “Americanism itself” that gangster movies represented was reversed to serve it now. “But every product of mass culture is a public act and must conform with accepted notions of the public good.” 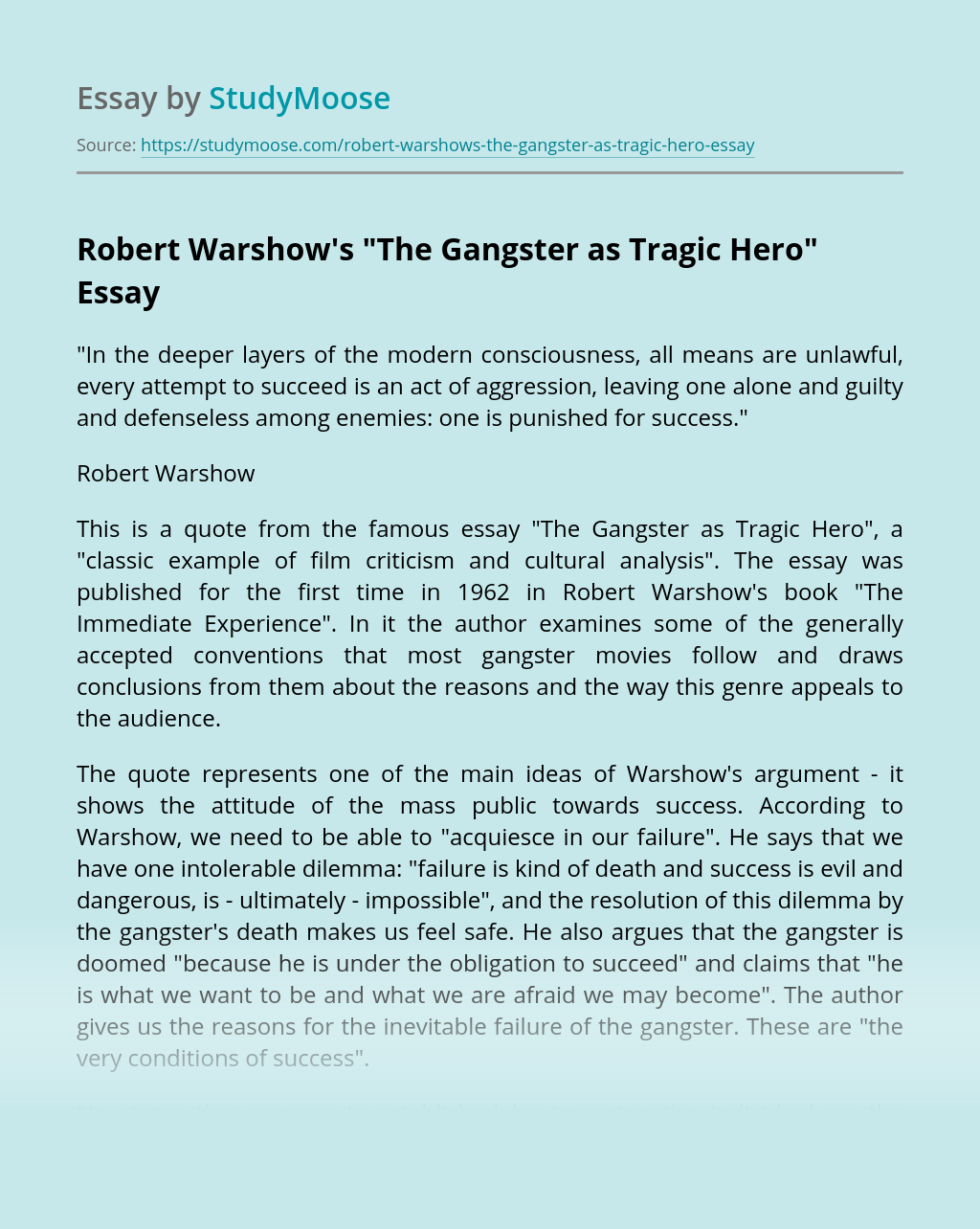