Al Capone as the Most Famous Gangster

Al Capone is known as one of America’s most famous gangsters, he was born on January 17, 1899. He came from an immigrant family and was born and raised in Brooklyn, New York. Capone continued his education until the first year of middle school when he got into a physical altercation with one of his teachers. He never returned to school, he instead joined a street gang known as James Street Boys Gang; as mentioned in “Al Capone” found at Britannica website.

Don't use plagiarized sources. Get your custom essay on
“ Al Capone as the Most Famous Gangster ”
Get custom paper
NEW! smart matching with writer

The head of the troubled gang, Johnny Torrio, was associated as well with the Five Points gang. Al joined the gang at a very young age, then soonly worked as a bouncer at a club called Harvard Inn, for Frankie Yale. Capone earned his famous name, Scarface, at this very same bar when he had disrespected a woman and brother. The brother split open Capone’s face leaving him a scar. Al hated this nickname that the press had created for him.

In 1919, Capone went with Johnny Torrio to Chicago, where he joined the Colosimo Mob. In the year of 1920, the Prohibition Act was enforced, which banned alcohol beverages from being sold. This opened more doors for all mobsters in the United States, meaning new bootlegging crimes. In 1925, Capone became the crime boss of Chicago; after Torrio was hurt in an assassination attempt, and retired. Once Al started running the mob, he expanded his interest by killing rivals and their gangs (Britannica). Two years later after his ruling, his estimated wealth was known to be about 0 million.

All this wealth was accomplished from Al’s organization of running bootlegging of alcohol, prostitution, and gambling. Capone’s mob was soon well-known after eliminating other competitions.

On February 14, 1929, the most horrific and well known crime of Chicago took place in a garage in the North Side of Chicago. This garage was known as for George “Bugs” Moran’s place to run his bootlegging crimes and was known as the St. Valentine’s Day Massacre of 1929. In this day, 7 Bugs gang members were assassinated with machine guns by men dressed as police officers. Moran’s mob was convinced that Al Capone was to blame for the assassination of the 7 men, but according to Al; he was in his Florida home when this took place. After investigating on the massacre, no one was charged for this heinous crime, especially not Scarface. This bloody event was considered the end of a significant gang resistance to Capone being the crime boss of Chicago, and yet many say it was the start of his downfall (History).

America’s most notorious gangster, Capone, also known in the newspapers as “Public Enemy No. 1” was close to his end. It all began a month after St Valentine’s Day Massacre, when Al decided not to appear before a federal court, on March 12,1929. After several times of being in prison and posting bail for minor crimes, the FBI had Al under investigation. As mentioned in the article “Al Capone” on the History website, “Through diligent forensic accounting, Special Agent Frank Wilson and other members of the Intelligence Unit of the Internal Revenue Service were able to put together a case, and in June 1931 Capone was indicted for evasion of federal income tax.”

Al was founded guilty on five counts out of the twenty-three counts against him. As notorious and heinous his crimes were, he has impacted and shaped the criminal world known today. The crime rates have increased as well as the trafficking of drugs, except that now these crimes are spread evenly throughout the country with no one as the crime boss. His legacy until this day, still lives on and is not forgotten no matter the awful events that came with it.

Al Capone as the Most Famous Gangster. (2021, Dec 13). Retrieved from https://studymoose.com/al-capone-as-the-most-famous-gangster-essay 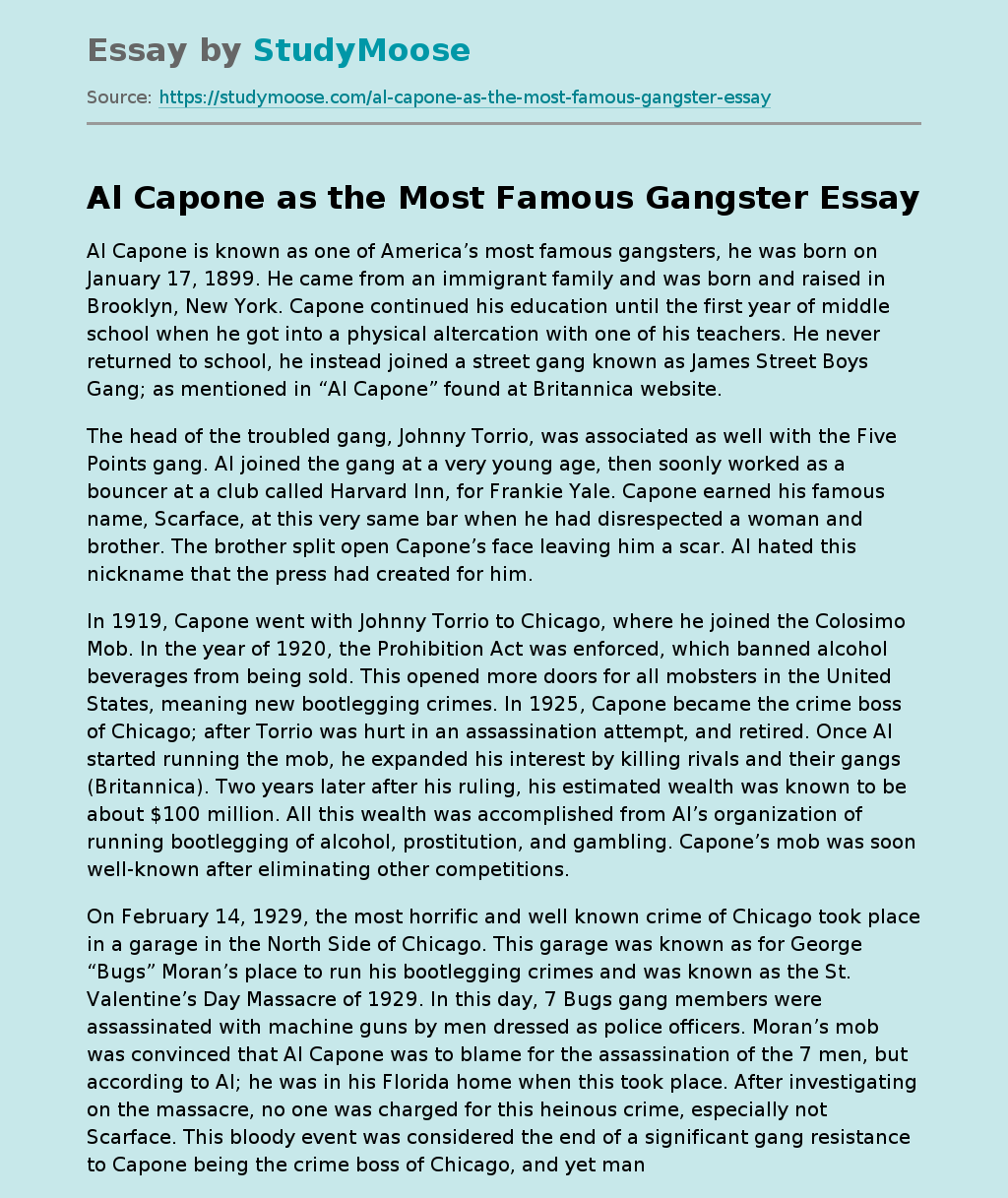