Al Capone and Lucky Luciano: The Most Famous Mobsters in the United States

The mafia have been involved in a lot of crime throughout history and have had huge impacts on countries. The United States have had issues with the mafia specifically Al Capone and Lucky Luciano.

Alphonse Gabriel Capone also known as Al Capone was born January 17, 1889 in New York his parents were immigrants from Italy. Al Capone’s family were religious and generous people. Growing up Al Capone was raised in the poor parts of New York surrounded by violence and thugs.

Don't use plagiarized sources. Get your custom essay on
“ Al Capone and Lucky Luciano: The Most Famous Mobsters in the United States ”
Get custom paper
NEW! smart matching with writer

When Al Capone was fourteen years old he dropped out of high school because he met the gangster Johnny Torrio who took him in and taught Young Al Capone how to maintain a group of gang while running an underground business. Al Capone first started as a bouncer for a gang known as the Five Points Gang, he was involved in crimes.

As he progressed through the years he moved to Chicago Illinois. In Chicago he was involved in many crimes such as prostitution, bootlegging operations, and murder.

Al Capone made millions off of the crimes he paid police for protection. As time flew by Al Capone grew stronger, richer, and feared. The only people who stood up and fought against Al Capone and his gang was A gang known as North Siders. Conflict began when Torrio killed The North Siders leader Dean O’Banion (also known as Dion O’Banion). Chaos broke at as people were being killed and eventually lead to Torrio being shot multiple times at his coffee shop making me retire after he recovered leaving Al Capone as the only leader of the gang at the age of twenty-six.

Al Capone lost his brother due to his brother getting in a gunfight with the police which made Al Capone realize that life can be taken away so quickly, he changed his tactics from doing them in a quiet/secretive form to an all out murdering people in front of civilians. As time flew by Al Capone and his gang were fighting the North Siders, people were afraid to testify and report crimes relating Al Capone because they knew that they would pay a price. Eventually,Al Capone crime caught the attention of the federal government, the president (Hoover), and chicago had him as number 1 public enemy. Al Capone was the first person to open a store that feed homeless which helped feed three hundred thousand homeless people. Federal taxes eventually got him and went to prison for tax evasion. Al capone was given eleven years while in prison in alcoprase he was stabbed and got a disease from one of his ex girlfriends. Once Al Capone was released from prison he lived until January 25, 1947.

Charles Luciano was born November 24, 1897 at Lercara Friddi, Sicily, Italy, he lived there for a couple of years. At the age of nine Luciano and his family immigrated to New York on the lower east side. Luciano dropped out of school at the age of fourteen to work. Luciano was earning very little, one day he was gambling in a game of dice which he earned around two hundred and fifty dollars. The earning made him change his ways and quit his job, he started to work as a street gang member. Luciano started his own gang but was also a member of the Five Points Gang located in New York.

In his late twenties lucky began to go up in the rankings of the gang. One day he was attacked by a four rival gang member, he was found under a bridge in critical conditions. When Luciano went to the hospital he was told that he was lucky to be alive which earned him the nickname Lucky Luciano. From 1916 to 1936, Luciano was arrested 25 times on charges for crimes he committed involving gambling, robbery, and assault. During the early 1900s Lucky was involved in bootlegging.

Arnold “The Brain” Rothstein was a gambler who provided money to Lucky because he saw potential in him. The investment paid off, Lucky had the biggest bootlegging operation in New York and expanded into Philadelphia. While Lucky was working for Giuseppe ‘Joe the Boss’ Masseria who was in fighting with rival boss Salvatore Maranzano he managed to become a leader for one of the city’s five families. Lucky achieved this by arranging Masseria death and by getting approval from Maranzano.

Once Lucky became a leader Maranzano saw him as a threat and ordered a hit on him but Lucky’smen were able to get toMaranzano first in september 1931. Since all of his rivals were out off the way Lucky focused on organizing crime not only between the five families but to other gangs throughout the country including Al Capone. When Thomas E. Dewey was appointed prosecutor of crime this caused awareness throughout the mob members because he was taking action aiming for the leaders such as Lucky. In 1936 Lucky was convicted on extortion and prostitution charges in June, he was sentenced 30-50 years in prison for prostitution. While Lucky was in prison he tried everything in his power to shorten his sentence.

When Lucky was sentenced to prison the United States were involved in World War II, he helped the nation by using his criminal connections in Italy to support and allow the allies forces to pass by. Lucky also helped the docos safe from german forces. Once he was released from prison he was deported back to Naples where he was under surveillance from italian police. Lucky was not allowed back to the United States but that did not stop him from running crimes. Lucky later traveled to Cube and hosted a meeting involving his mob associates, he was trying to distribute at Cuba to the United States but he was denied and forced to leave by Cuba’s government. At his dying years he helped others in need and do good things in life. As time flew by Lucky began to lose leadership and unfortunately found death in January 26, 1962.

Both of these mobsters have a had a big impact in the United States both good and bad. The two notorious mobsters achieved leadership within their gang but in different manner, Lucky was an aggressive mobster who wasn’t afraid to take out competitors while Capone was a mobster who did all his work as quiet as possible. Lucky was raised and had leadership in New York while Al Capone was raised in New York but moved to Chicago in his mid teen years. Lucky was more involved in an international business compared to capone. At the end both mobsters actions influenced young and upcoming mobsters.

Lucky and AL Capone both had roots from Naples Italy. Al Capone feed thousands and provided help for others who couldn’t afford it, he was also the first person to open a shop which was dedicated to feed those who were jobless/homeless. Lucky paid for others when they needed medical attention. Both mobsters tried their best to help others when they asked, they also provided jobs for those who needed it. They both donated thousands to charities and provided protection to others. Lucky supported the United States when they were in World War II and protected the New York docs.

All their actions helped the city they were at and the people who lived in there. They made most of their profit of off bootlegging and gambling. There actions caused many people to die and both made millions from the crimes they committed. They both had injuries from the time as mobster which helped them get their nickname Lucky and scarface. They both spent time in prison for the crimes they commited. Eventually both of these two great mobsters lost their lives at mid age both and even though they didn’t live a long life their actions will always be remembered.

Al Capone and Lucky Luciano: The Most Famous Mobsters in the United States. (2021, Dec 13). Retrieved from https://studymoose.com/al-capone-and-lucky-luciano-the-most-famous-mobsters-in-the-united-states-essay 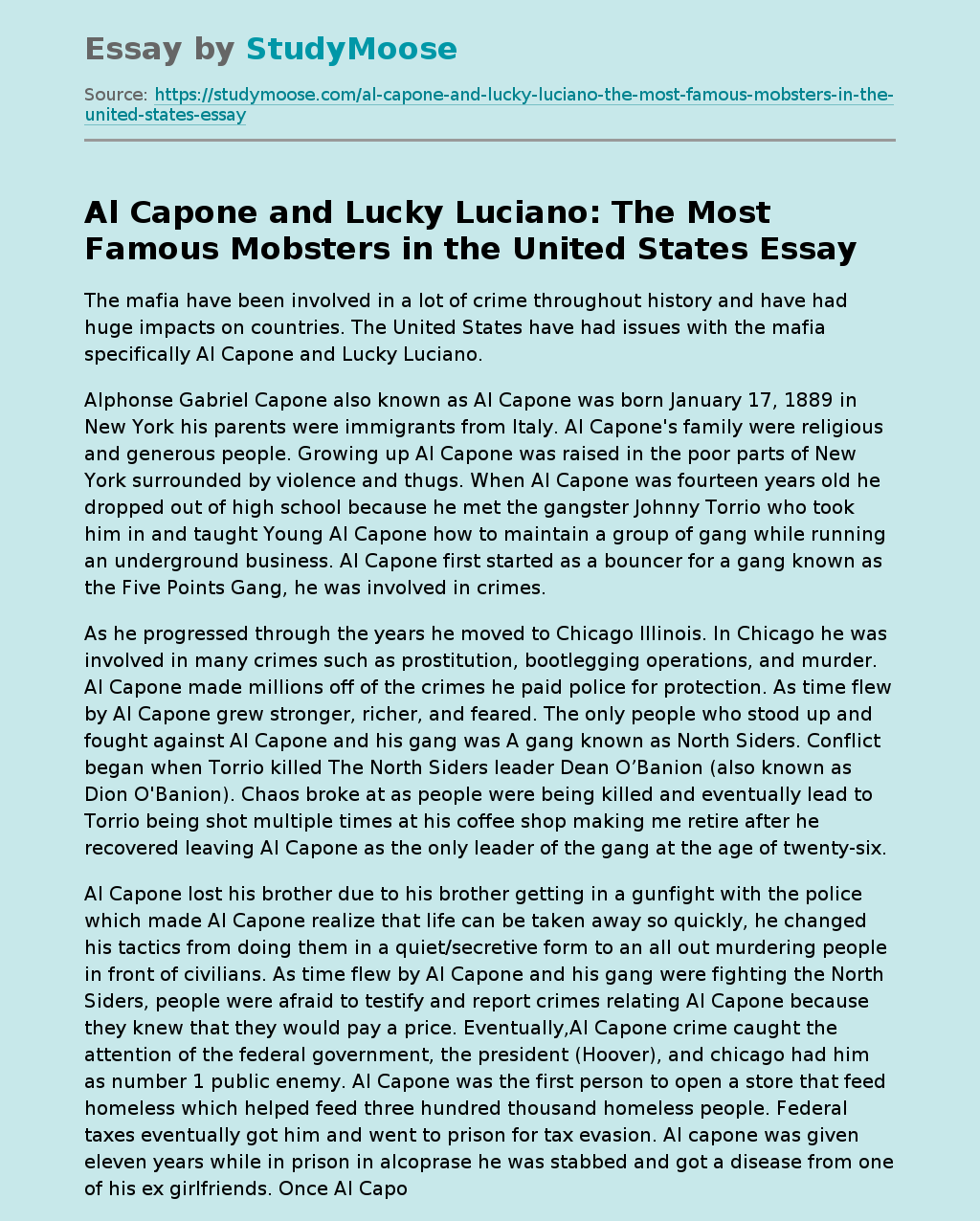