In the character of Gatsby, Fitzgerald glamorises the figure of the gangster in 1920s America

In the character of Gatsby, Fitzgerald glamorises the figure of the gangster in 1920s America. With reference to appropriately selected parts of the novel, and relevant external contextual material on gangsters in America in the 1920s, give your response to the above view.

The Great Gatsby is a novel in which Fitzgerald repeatedly and unapologetically glamorises gangsters and their lifestyle, especially with regards to how he portrays their vast wealth. In examining this claim a good place to start would be clarifying what a gangster is: “a member of an organised criminal gang.

Don't use plagiarized sources. Get your custom essay on
“ In the character of Gatsby, Fitzgerald glamorises the figure of the gangster in 1920s America ”
Get custom paper
NEW! smart matching with writer

” This definition fits many characters in the novel, most of all Gatsby, who is the most focussed upon and glamorised of all.

To glamorise something is to, “make something seem glamorous or desirable, especially spuriously so.” Surely Gatsby’s lifestyle is the epitome of this. He is the embodiment of success and the American Dream, complete with mansion, wealth and extravagant cars. Nick describes his house as, Fitzgerald makes clear that the source of Gatsby’s affluence is the shady, “business,” he is involved in.

In this way Fitzgerald suggests that being involved with gangsters is a legitimate method of accumulating wealth, and therefore glamorises the figure of the gangster in 1920s America.

To Fitzgerald’s readers this would have been nothing new. In the 1920s gangsters were almost regarded as celebrities, and they had lifestyles to match. In the public eye gangsters such as ‘Lucky’ Luciano had it all: money, fame, clothes and women. In the book The Gangster in American Culture, David Ruth wrote, “the latest styles marketed the gangster as an avid consumer who invested the time and expense necessary to stay on the leading edge of fashion.

” This captures Gatsby perfectly. Fitzgerald, through the character of Gatsby, sends out the message to his readers that organised crime is little more than a get-rich-quick scheme, and this could be interpreted as an attempt to glamorise the gangsters of the 1920s.

Further support for this proposition can be found when we consider Nick’s wholly positive reactions to Gatsby, despite the fact that he knows more about his shady dealings than any of the other central characters. Nick paradoxically states, “Only Gatsby…was exempt from my reaction – Gatsby, who represented everything for which I have unaffected scorn.” Even though Nick knows he should be repulsed by Gatsby’s lifestyle, he can’t help but be drawn to it. He even claims that, “Gatsby turned out all right in the end,” completely disregarding the violence that prematurely terminated Gatsby’s life. Fitzgerald, through Nick, stubbornly only considers what was good about Gatsby and his gangster lifestyle and uses Nick’s narration to thoroughly glamorise the figure of the gangster in 1920s America.

Culture always seems to idolise those that live above the law, and the 1920s were no exception. Gangsters were masters of the art of manipulation, presenting glamorous lives in order to attract new recruits and victims. Media latched onto this front and glorified it. Popular novels and films at the time depicted the gangster life as something romantic, and it could be argued that Fitzgerald, through The Great Gatsby, was capitalising on what was selling well at the time, and he glamorises the figure of the gangster in 1920s America because he knows that is what the people wanted to read.

Thirdly, Fitzgerald suggests that a lifestyle of organised crime brings power. This is clearly displayed in the scene where Gatsby is let off from receiving a ticket. He produces, “a white card from his wallet, he waved it before the man’s eyes.” When questioned about this by Nick, he ambiguously replies, “I was able to do the commissioner a favour once, and he sends me a Christmas card every year.” This suggests that Gatsby has gained so much power and notoriety from his criminal activities that the law no longer applies to him. Fitzgerald presents us with a character who is above even the law itself; a clear glamorisation of the figure of the gangster in 1920s America.

Police bribery was very real in 1920s America. America’s population had exploded due to mass immigration and the police service was nowhere near large enough to effectively deal with the influx of crime that followed. There were even cases of policemen such as Roy Olmstead who traded a life of law enforcement for a bootlegging business. Many law enforcers in the Bureau of Prohibition and at the state and local level, were corrupt and took briberies. According to the testimony of Emory Buckner, a United States attorney in New York at the time, “the air of corruption had even descended into the civil parts of the courts, and reports were made to the senior United States judge of attempts to bribe jurymen even in the toilets of the building.” Gangsters had control of every facet of society, even the law, and Fitzgerald reflects this reality in The Great Gatsby. When we consider all the benefits Gatsby receives from his gangster lifestyle, it dumbfounds me that people would suggest Fitzgerald doesn’t glamorise it. However, those that oppose my claim would argue that Fitzgerald does not glamorise gangsters, and there is some merit to this interpretation, especially when we consider that Gatsby’s wealth is only a façade for a much shadier underworld.

Fitzgerald hints at the unglamorous reality of Gatsby’s life several times in the book, even from the rumours spread by his party guests: “Somebody told me they thought he killed a man once.” Later on in the novel Gatsby’s own behaviour when Nick asks about his business suggests that he is not as pure as he likes to appear: “I think he hardly knew what he was saying, for when I asked him what business he was in he answered, “That’s my affair,” before he realized that it wasn’t the appropriate reply.” This web of secrecy and deceit suggests that Fitzgerald does not glamorise the figure of a gangster in 1920s America.

Gatsby’s shady business is likely related to prohibition and the bootlegging of alcohol. This was a very common crime in the 1920s, and bars that sold alcohol were referred to as ‘speakeasies.’ An example of an affluent bootlegger is Al Capone. Within 2 years, Capone was earning $60 million a year from alcohol sales alone. However, his life was not a glamorous affair; he was caught and spent 11 years in jail. Gatsby never went to jail – he got a life sentence instead. This could be interpreted as a warning from Fitzgerald about the dangers of the gangster lifestyle, and therefore he does not glamorise the figure of the gangster in 1920s America at all.

The claim that Fitzgerald glamorises gangsters could be contested when we consider that Gatsby is only front for the much more immoral figure of Wolfsheim. When Nick meets Wolfsheim he proudly calls their attention to his cufflinks, which are made from human molars. The reader is not intended to admire Wolfsheim nor aspire to his lifestyle; instead they should be repelled by it. This association with notorious individuals suggests that Gatsby is involved in an underworld of violence and exploitation. Gatsby discloses that he is a gambler who fixed the 1919 World Series baseball tournament, further supporting that Fitzgerald does not glamorise the figure of the gangster in 1920s America.

Wolfsheim was based on a real gangster named Arnold Rothstein. He fixed many sporting events and became a millionaire by the age of 30. However, like Capone his empire had a messy conclusion; Rothstein failed to pay a large debt resulting from a fixed poker game and was murdered in 1928. By basing his characters on such a villainous gangster Fitzgerald is not glamorising the figure of the gangster in 1920s America.

Finally, it could be that Gatsby himself is not a gangster, but is instead an innocent victim of a corrupt system. Nick observes that, “I could see nothing sinister about him.” It could be argued that Gatsby was exploited by men like Wolfsheim – after all, he just uses Gatsby for his own ends and doesn’t even attend his funeral. To quote Virginia Lee, “Gatsby retains a purity of heart that transcends the corruption.” This does not glamorise gangsters – it shows them for what they really are. They care for nothing but money and are prepared to exploit dreamers like Gatsby for their own gains.

In the 1920s gangsters were known to exploit legitimate businessmen through a method called racketeering. This type of crime involved the infiltration of gangsters into legitimate business and then making violent threats towards the owner. Anybody who was confronted by a gangster wanting in on their business knew they must yield in fear of being executed. Perhaps this is what happened to Gatsby, and he knows he cannot escape from his life of crime for fear of being killed, which is not at all glamorous.

To conclude, after careful consideration we determine that Fitzgerald certainly glamorises the figure of the gangster in 1920s America. We see this reflected throughout the novel, and in the popular culture. The opposing arguments have some merit but ultimately they fail to realise the true implications and context of The Great Gatsby.

In the character of Gatsby, Fitzgerald glamorises the figure of the gangster in 1920s America. (2020, Jun 01). Retrieved from https://studymoose.com/character-gatsby-fitzgerald-glamorises-figure-gangster-1920s-america-new-essay 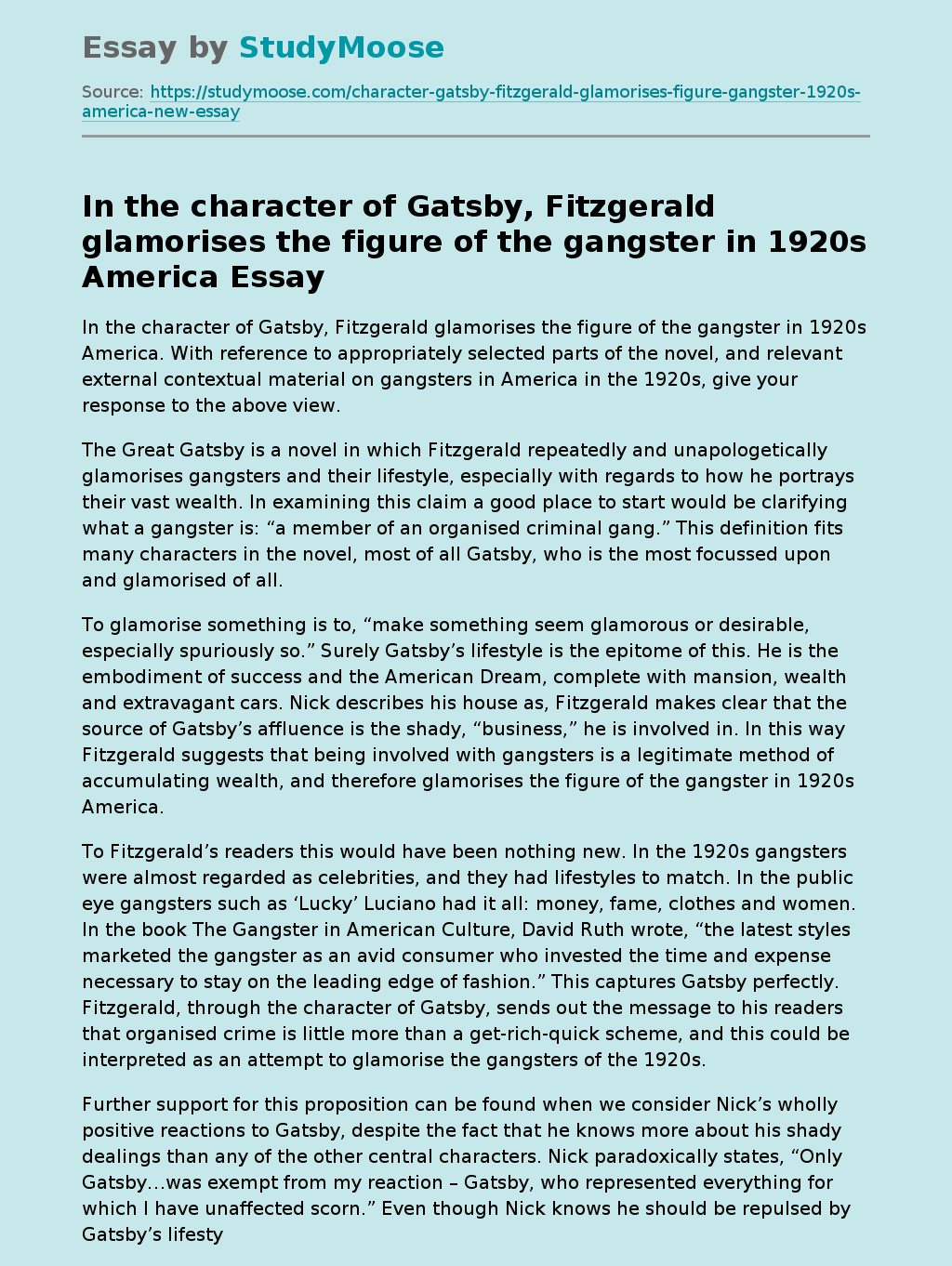