According to the constitution of the United States of America, all people are entitled to life, liberty, and the pursuit of happiness. To understand that phrase, the word pursuit must be fully taken into account; it means that happiness cannot be guaranteed under any circumstances. What causes happiness is completely different between individuals. For example, a poor kid may be made happy with just a weeks worth of food and water, whereas someone who is more spoiled could not be made happy with only that.

Don't use plagiarized sources. Get your custom essay on
“ “The Great Gatsby” by Scott Fitzgerald: Thesis ”
Get custom paper
NEW! smart matching with writer

It was once said that “If you really want to be happy, then no one can stop you.” Although there is truth in this statement, this statement also oversimplifies things greatly. Happiness is not something that can be bought, that is why often the richest people in the world are unhappy.

To others, they may seem to have everything, but in truth they are not happy because happiness is different to everyone. In _The Great Gatsby,_ by F.

Scott Fitzgerald, many characters are in search of happiness, and many of them never attain it although they “seem to have it all.” Many of these characters are extremely wealthy, have a good set of friends, and can get most people to do what they want, yet they are not happy. This is because happiness is only often attained once a particular goal is reached, and often some goals are unattainable because all humans on earth have free will. Furthermore, some of these characters have flaws that don’t allow them to be happy.

Their character gets in their way of their quest for happiness, and as a result discontent manifests itself in their minds. Jay Gatsby and Daisy Buchanan are two characters who seem to have a great life, but cannot find happiness within themselves because of their social situation.

Throughout the book, Jay Gatsby’s main goal is to court Daisy Buchanan. Gatsby felt that he could only get eternal happiness by winning over Daisy Buchanan and marrying her. In the book, it is said “‘We haven’t met for many years,’ said Daisy, her voice as matter of fact as it could ever be. ‘Five years next November.’ The automatic quality of Gatsby’s answer set us back at least another minute.” (92). This excerpt shows that Gatsby has been so
obsessive over, he even knows _exactly_ when the last time he and Daisy met. His answer is described as automatic, which shows that he has been pondering this and has put a lot of effort into trying to win Daisy. However, in the end of the book, Gatsby does not win Daisy. This makes it impossible for Gatsby ever to be fully happy with life. Jay Gatsby was not a poor person; he had a lot of money and had exuberant parties almost nightly.

In the book, it is said “There was music from my neighbor’s house through the summer nights. In his blue gardens men and girls came and went like moths among the whisperings and the champagne and the stars.” (43). This shows that the parties were quite an affair, and many rich and famous people came to his parties. However, this was not enough to make him happy. He had all the luxuries money can buy, which would be more than enough to make some of us happy, but for Jay Gatsby it wasn’t enough. He never reached happiness because Daisy Buchanan chose Tom over Jay. His flaw to reaching happiness was that he had such a single-tracked mind that he only had one goal, a goal that was dependent not on himself but on someone else. His character flaw, which led to his unhappiness, was that he wasn’t open to being happy in any way other than being with Daisy.

Another character who never attained happiness, although she had many riches and a good life by the standards of most people, was Daisy Buchanan. Daisy Buchanan was from East Egg, the part of the island in which the rich people of “old wealth” are from. Nick says in the book “Their house was even more elaborate than I expected, a cheerful red and white Georgian Colonial mansion overlooking the bay.” (11). This excerpt clearly shows that she lives a good lifestyle with a nice house. These people of “old wealth” normally do not have to work and yet live a very opulent lifestyle. This would be happiness for most but Daisy could not get happiness out of this. Throughout the course of the novel, Daisy was put in a very difficult situation. She was forced to choose between two men she loved very much and this decision caused her to be unhappy.

Either way she chose she would disappoint someone, and wouldn’t get to be with the other one. They only way she could be truly happy was if she could be with them both, and that could never happen as normally women aren’t shared between two men. In the book it is said about Daisy “But with every word she was drawing further and further into herself, so he gave that up and only the dead dream fought on as the afternoon slipped away, trying to touch what was no longer tangible, struggling unhappily, undespairingly, toward that lost voice across the room.” (142). This shows how tough of a choice it was for Daisy and how unhappy the choice made her.

These characters were not unhappy because they weren’t given the chance to be happy, but because their social situation and emotional side didn’t let them. They had all the material things in the world that are necessary to lead a good, happy life, but they did not make the most of it. The Great Gatsby_ shows how characters can have everything they want materially, but still not attain happiness. 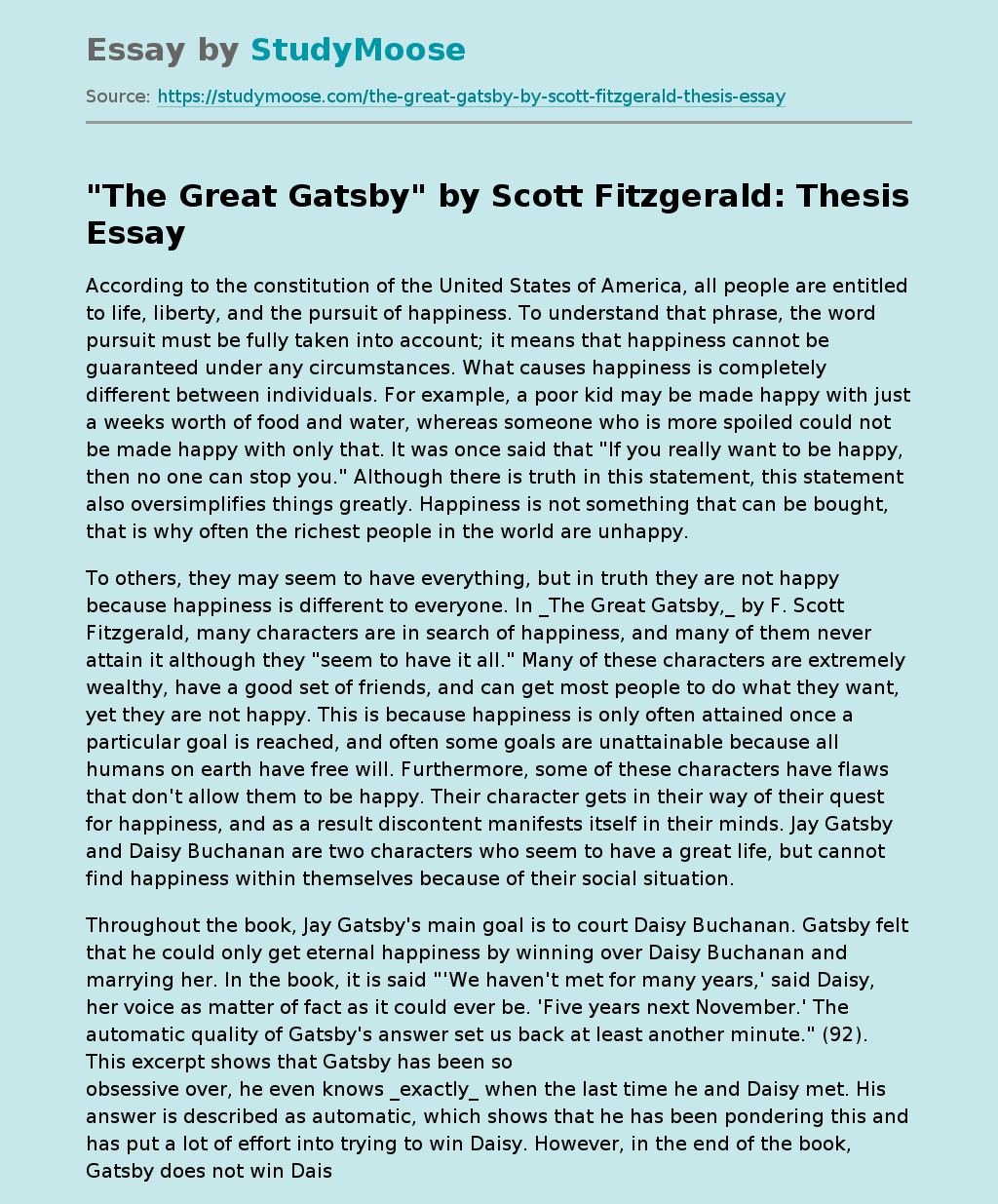