How does F. Scott Fitzgerald tell the story in chapter 2 of 'The Great Gatsby'?

The introduction of Tom’s mistress, Myrtle, in Chapter Two of ‘The Great Gatsby’ plays as the focal point of the chapter. It begins with Tom and Nick travelling into New York on the train, however they get off in the Valley of Ashes, a derelict setting between West Egg, East Egg and New York. The pair stop at a mechanics, and speak with the man who is married to Myrtle, Wilson. Myrtle, Tom and Nick then go to their New York apartment, and have a party with a few other guests.

Don't use plagiarized sources. Get your custom essay on
“ How does F. Scott Fitzgerald tell the story in chapter 2 of ‘The Great Gatsby’? ”
Get custom paper
NEW! smart matching with writer

This party is the first real introduction of the mass consumption of liquor at the time, which was due to Prohibition. It highlights the excessive nature of the time, which is a constant theme in the novel, as seen at Gatsby’s elaborate parties. F Scott Fitzgerald uses the narrative techniques to establish the characters, whether they have been introduced to the reader or not already, and to expose the effects of the elaborate, greedy lives the wealthy lived on the less fortunate people.

The setting of the Valley of Ashes is key in telling the reader how the excessive lives lived by the wealthy is harming the less fortunate. Firstly, the repetition of the word ‘ash’ allows the reader to fully understand how desolate the Valley of Ashes is. It carries connotations of smoke, and dullness. The word ‘ash’ may be symbolic, as this is where the fire has been burnt out; there are no excessive parties, and the people here are not as colourful or as full of life as those in West Egg and East Egg.

Furthermore, the valley is described as ‘fantastic farm and grotesque gardens’. As both farms and gardens are places in which things grow, it could be informing the reader that the mass production of things, along with the wild lifestyles of the wealthy, is causing this destruction, and that it will grow if it continues. It allows the reader to understand that the people living there are almost bi-products of the wealthy people’s elaborate lives.

Another interpretation of this, could be that it is proleptic and symbolic of Tom and Daisy’s actions at the end of the novel, and they are ruining people’s lives, just as the lives of those in the Valley of Ashes have been ruined. The juxtaposition between the grey setting here, and the frivolous and colourful setting of West Egg and East Egg is symbolic of the differences between the people living in those areas, and the kinds of lives they lead.

F Scott Fitzgerald uses the contrast and characterisation of Myrtle and Daisy to add to the story of ‘The Great Gatsby’. This can be seen through colour symbolism, and the juxtaposition between the colours that represent Myrtle’s character and Daisy’s character. Myrtle is said to be wearing a ‘spotted dress – blue’. Blue is a rich, sensual colour, which is juxtaposed against the colours that represent Daisy through her clothing, which are white. While white is a colour of purity, blue is a colour of sensuality. This informs the reader that Myrtle is a lot less innocent than Daisy, which we know due to the fact she is having an affair. It may also inform the reader a reason as to why Tom decided to start having the affair with her; Daisy was too innocent for him, and he wanted someone with a more obvious sexual desire and drive. The innocence of Daisy may, however, be seen as ironic by some readers, as she too has an affair, with Gatsby, and kills Myrtle.

The reader can become aware that Myrtle is unhappy in her marriage and where she lives, and she is too bright and colourful herself to live somewhere are grey as the Valley of Ashes. The narrator says that ‘… there was an immediately perceptible vitality about her, as if the nerves of her body were continually smouldering’. The use of the word ‘smouldering’ is significant, as it is as if Myrtle is burning, or that she is on fire. The importance of this symbolism is that it informs the reader that she does not belong in this place of ash, as she she feels as if she is a part of the fire, and that she belongs with the people that created the ash, despite the situation she is in with her husband. It could be telling the reader that she wishes to get out of there. However, when she does try to escape later in the novel, she is killed. This could be telling the reader of the social boundaries present, as those from the Valley of Ashes cannot simply leave to be a part of the frivolous lives lived in East Egg and West Egg.

The narrative perspective supplied to the reader in ‘The Great Gatsby’ is the voice of Nick Carraway. His character is revealed greatly through this in chapter 2, as his opinion on the party in New York is made clear, allowing the reader to understand that he believes he is outside of the party, and is not like the other people there. This is most obvious when the novel readers ‘I wanted to get out and walk eastwards towards the park through the soft twilight, but each time I tried I became entangled in some wild, strident argument which pulled me back, as if with ropes, into my chair’. This allows the reader to perceive the party as some sort of grotesque affair, which is unappealing. If the narrative voice had been from Myrtle or Tom’s characters, the party would have seemed much more entertaining and enticing. It highlights the fact that people in these settings were drawn into a life of drinking and promiscuity, whether they wanted to be there or not.

In addition to this, the metaphor ‘…as if with ropes, into my chair’ emphasises the idea that Nick is trapped, almost as a prisoner, or someone being tortured. He is clearly not enjoying himself, and he is feeling forced into staying, as if he physically cannot leave. Alternatively, the use of ‘ropes’ that he became ‘entangled’ in may be symbolic of the tangled lies in which he has become involved in; he is with Tom’s mistress, despite the fact he should be loyal to his cousin, Daisy.

The language used in describing New York as a city is key in allowing the reader to understand the relationship between Tom and Myrtle. The sky of the city is described as being ‘like the blue honey of the Mediterranean’. This simile is used to emphasise the sensuality and sexual basis through the presence of the word ‘honey’, which holds these connotations. This allows the reader to understand that due to the fact Tom and Myrtle’s apartment is in this ‘honey’ city, their relationship lies on the basis of sex, rather than deep romance. Alternatively, an interpretation of this could be that the sweetness of honey lures people into the city, and that the people attack it to consume, almost like bees. It allows the reader to understand that people were driven by consumerism.

F Scott Fitzgerald uses a number of narrative techniques to tell the story in chapter 2 of ‘The Great Gatsby’. The reader gets a clear understanding of the elaborate lives lived by the wealthy through these techniques, and are introduced to the consequences of such lives for the first time. The introduction of new characters such as Myrtle are also used to enhance the other characters, such as Tom, and his adulterous side. The new setting of New York City also highlights the excessive consumerism at the time, and produces more context.

How does F. Scott Fitzgerald tell the story in chapter 2 of 'The Great Gatsby'?. (2016, Mar 17). Retrieved from https://studymoose.com/how-does-f-scott-fitzgerald-tell-the-story-in-chapter-2-of-the-great-gatsby-essay 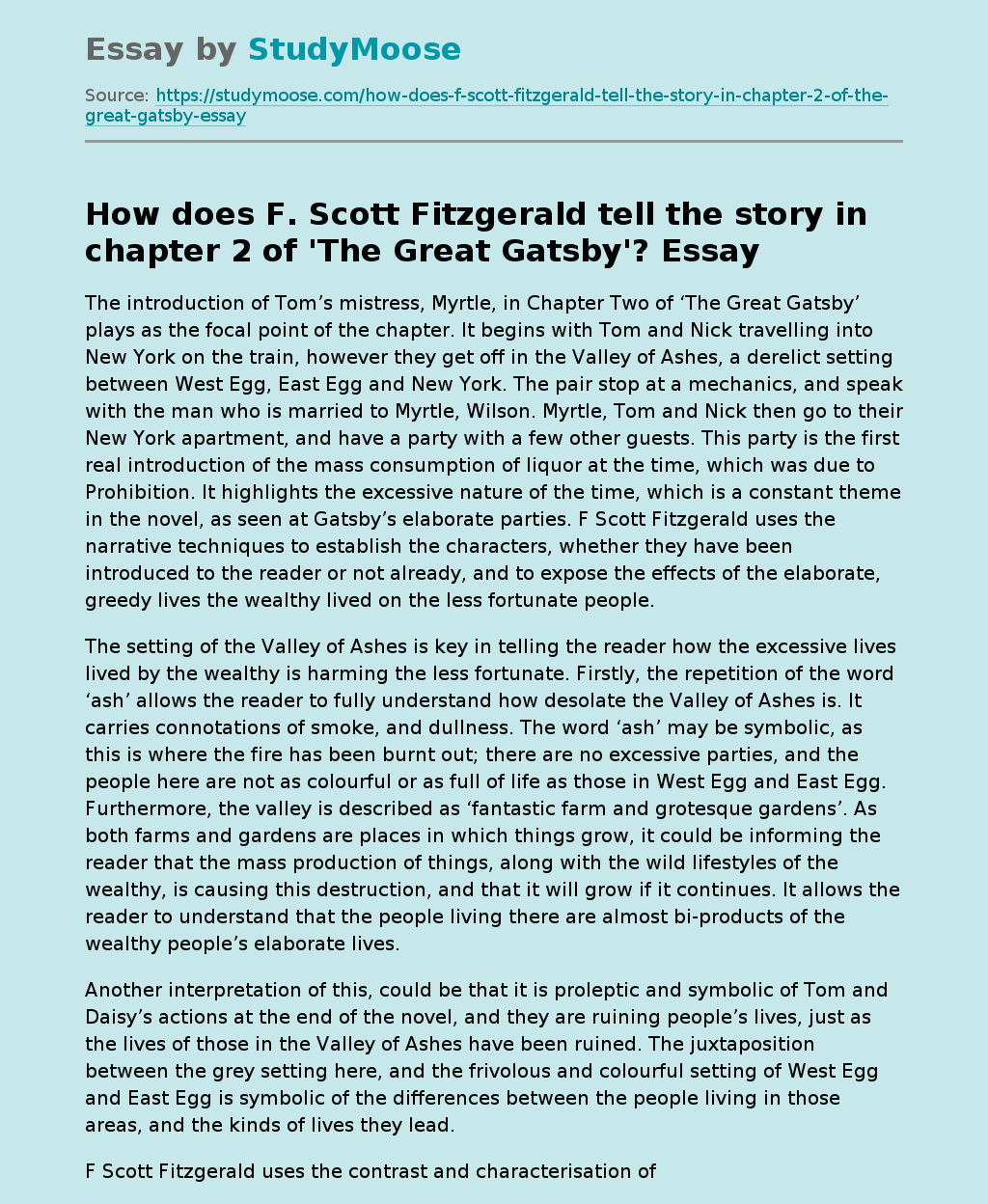