What Is Oppositional Dress?

“Oppositional Dress” In Minabrere Ibelema’s essay “Identity Crisis”, Ibelema suggests that the mainstream American culture is so powerful that all cultures conform to it. Ibelema does this by showing how the mass media portrays African Americans in relation to their cultural identity by using situation comedies as a measuring tool. Of the episodes Ibelema uses very few of them look at African Americans cultural identity.

Don't use plagiarized sources. Get your custom essay on
“ What Is Oppositional Dress? ”
Get custom paper
NEW! smart matching with writer

However, what they do is briefly address a cultural story line for one episode, but then revert back to the mainstream Anglo programming. On the other hand, Elizabeth Wilson says in her essay “Oppositional Dress” that sub cultures do exist in society and are strong enough to resist assimilation into the mainstream, and still exist on their own terms.

Wilson proves her point by giving examples of sub cultures that appeared in society, and she shows that they still thrive today.

On example Wilson uses is the hippie culture that evolved in the 1960’s. She points out that hippies can be seen today in some areas of the United states, proving her point. She also mentions other movements like the Gay Liberation Movement, the Punk movement, and the Skin Heads, who can all be seen in some form today. In mainstream American culture some individual sub cultures do get lost in the mainstream, but are not forgotten, however most oppositional cultures resist assimilation into the main steam and continue to define themselves on their own terms. In Ibelema’s essay, he says that the mainstream culture is so strong that individual cultures assimilate into it. This proposition is not completely correct.

The examples Ibelema uses are derived from situation comedies that are directed at a cross cultural mainstream audience. His point is that the African American culture is nonexistent, or assimilated because African American cultural values are not expressed fully in these sitcoms, thus they are a part of the assimilation process. Because these sitcoms are directed at a cross cultural audience the assumption Ibelema uses is false. The African American culture is not lost in America, its existence is found in the homes of African Americans throughout America and is passed on through mothers and fathers, and grand mothers and grand fathers. An opposing view to this argument is Elizabeth Wilson’s essay “Oppositional Dress”. Her belief is that sub cultures exist in the mainstream society, and they dictate their own existence. Wilson proves her theory by giving example after example of sub cultures that evolved from the mainstream in both the United States and Great Britain. These sub cultures usually evolve around young people that are rebelling against the dress and views of their parents.

For example the Hippie movement of the 1960’s started a dress trend that is still seen across America. They wore bell bottomed pants, flowery shirts, they grew their hair long, and they supported peace over war. These views were seen as oppositional to their parents, and thus they became “Hippies” Another example Wilson gives is that of the Gay Movement. In the 1970’s this movement was in full form. What the Gay Movement started was the idea of a homosexual or lesbian person publicly declaring themselves as being gay. One of the most outrageous ways to do this was to dress in “drag”, wearing makeup, and a dress. These homosexuals broke down the door of stereotypical gender roles and took on cross dressing as a defining tool. Over time the Gay Movement took on another task to reestablish their masculinity. From this came the “clone look”. Clones wore jeans, distressed leather, heavy boots, and were normally clean shaven with a styled mustache. The Gay Movement didn’t assimilate into the mainstream, it evolved into its own sub culture that exists today.

African Americans and other ethnic minorities also have cultivated their own controversial styles. Their styles however usually carried with it a message. By the 1940’s young blacks developed a distinctive style of dress called a zoot suit. These suits had exaggerated padded shoulders, peg top trousers, narrowing ankles, and the were lavishly draped. The zoot suiters dressed this way to demonstrate against the war effort. The zoot suiter is a clear example of a symbolic sub culture that was a statement of ethnic pride, and a refusal to assimilate. In mainstream American culture, sub cultures are not lost or assimilated into the mainstream. They are embraced by those who participate in them, and evolve over time to suit the needs of the sub culture. The sub cultures that exist in society aren’t separate from the mainstream culture, but part of it. Elizabeth Wilson is correct in her belief that sub cultures resist assimilation, and seek to clarify their individuality on their own terms.”

What Is Oppositional Dress?. (2020, Jun 02). Retrieved from https://studymoose.com/what-is-oppositional-dress-essay 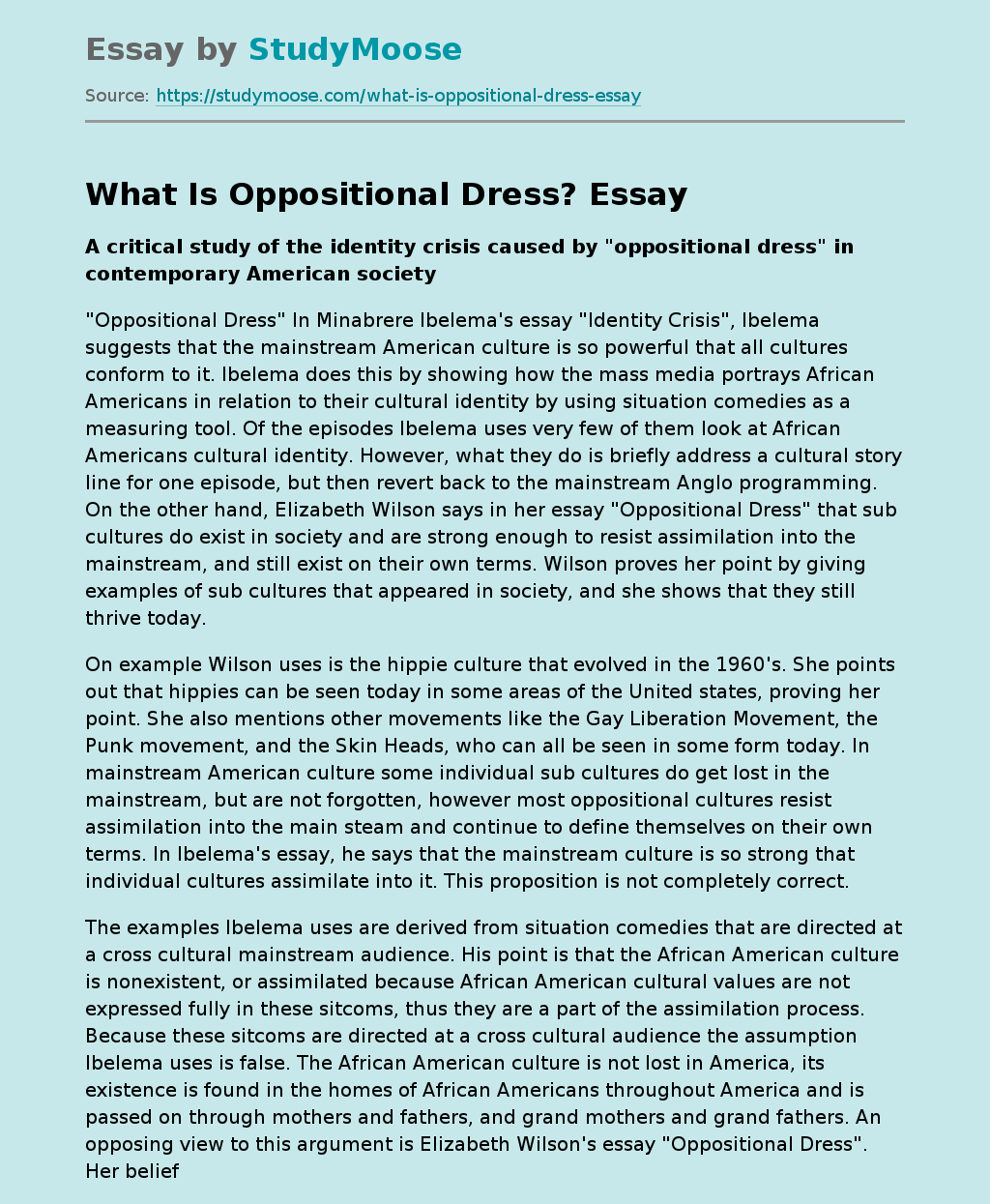