Fitzgerald's use of diction in The Great Gatsby

The Great Gatsby, written by F. Scott Fitzgerald, uses a specific choice of words along with selection of detail to develop the characters of Tom Buchanan and Myrtle Wilson. This essay will cite specific examples that correspond to Fitzgerald’s use of diction and details.

Although this passage does not emphasize on Tom Buchanan, his character is developed through the use of literary techniques. Tom’s character speaks three times during the course of this scene, and all three times his words make him sound as if he is superior to everyone.

Don't use plagiarized sources. Get your custom essay on
“ Fitzgerald’s use of diction in The Great Gatsby ”
Get custom paper
NEW! smart matching with writer

” ‘It’s a bitch,’ said Tom decisively. ‘Here’s your money. Go and buy ten more dogs with it.’ “(Page 28) In this quote, diction and a specific choice of words is apparent through the use of the word ‘decisively.’ Using this word creates the feeling that Tom is authoritative and commanding. This citation also serves as an example of Tom’s mannerisms throughout the novel. He speaks to an elderly person with contempt by telling him that he is wrong and that he should buy ten more dogs with the money he gives him.

A parallel can also be drawn between Myrtle and the dog in that he looks at the dog in the same degree of importance as Myrtle. Tom’s lack of patience can also be seen in his retort to the old man’s answer. Another citation, which serves to magnify Tom’s superiority over others in the novel, is when Nick tries to leave Tom and Myrtle.

“No you don’t,” Tom interposed quickly. “Myrtle’ll be hurt if you don’t come up to the apartment. Won’t you, Myrtle?” (Page 28) Yet again, this citation serves to demonstrate Tom’s commanding personality. More specifically, he answers for Myrtle as if she couldn’t have answered herself.

As a result of Fitzgerald’s effectual use of diction and word choice, the passage is able to effectively develop Tom’s character. Tom’s domineering and forceful persona is further enhanced in this passage through the demonstration of his gestures and dialogue. Although Tom does not play a major role in the selected passage, his persona is greatly shaped through the author’s use of language.

Much of this chapter is dedicated to the augmentation of Myrtle’s character. The author uses imagery, dialogue, and diction to create her personality. The use of imagery is seen in the beginning of the passage: “She had changed her dress to a brown figured muslin, which stretched tight over her rather wide hips…”(Page 26) Myrtle’s actions also have a lot to say about her character. An example was when she “let four taxicabs drive away before she selected a new one.” (Page 27) This type of behavior serves to contrast her true lifestyle of being married to a poor and hard working garage man. “Is it a boy or a girl?” she asked delicately. (Page 28) This citation from the passage builds onto Myrtle’s sensitive side. It also shows that she cares about the unimportant sides to life and is very materialistic.

“Mrs. Wilson gathered up her dog and other purchases, and went haughtily in.” (Page 28) This quote, along with many others made in this selection make great use of adverbs to create the character of Mrs. Wilson. The use of the word ‘haughtily’ adds to the arrogant character that she displays. This again contrasts her true lifestyle and emphasizes her dual personality. Other adverbs that were used in this passage to characterize Myrtle were: eagerly, enthusiastically, delicately, and earnestly. All of these adverbs in one sense or another characterize Mrs. Wilson’s actions and character. Accordingly, the author’s language uses imagery, adverbs, and actions that create her arrogant and contrasting personality.

In conclusion, F. Scott Fitzgerald effectively employed diction and selection of detail to develop the characters of Tom Buchanan and Myrtle Wilson. He did this by using various literary techniques and parts of speech to emphasize the character’s personality. For example, he uses imagery, irony, adverbs, dialogue, actions, adjectives, and mannerisms to bring out the arrogance of Myrtle and indifference of Tom Buchanan. Thus, the author properly uses diction and selection of detail to serve the purpose of developing the characters of Mrs. Wilson and Tom Buchanan.

Fitzgerald's use of diction in The Great Gatsby. (2016, Jun 19). Retrieved from https://studymoose.com/fitzgeralds-use-of-diction-in-the-great-gatsby-essay 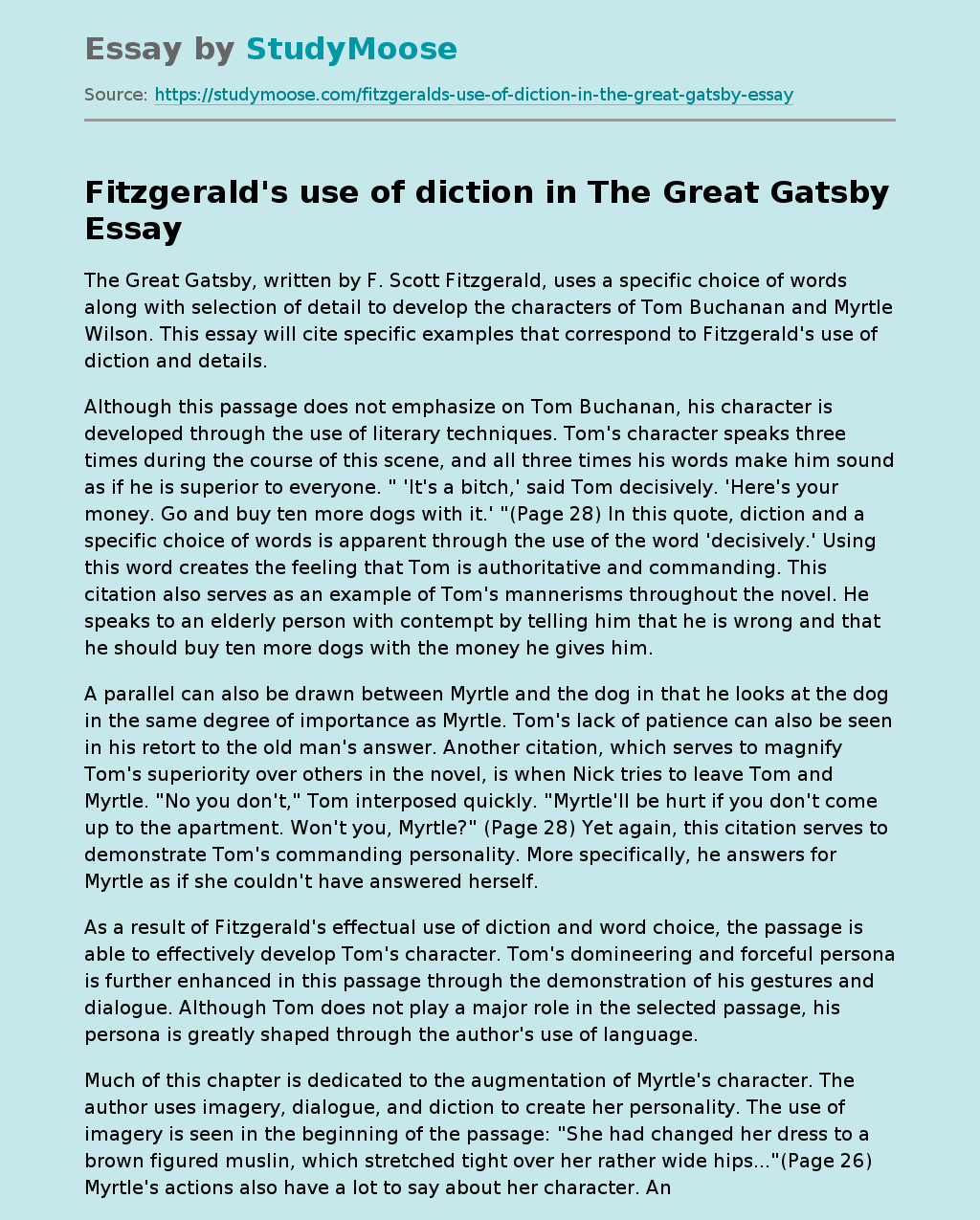