In Fitzgerald’s novel there is typically more focus on Nick Carraway, the narrator and James Gatsby, who the novel is named after, rather than the secondary characters. However, Daisy is in some way important, because she is what steers the novels course of action due to Gatsby’s love for her. Daisy is what influences his lifestyle and eventually his death.

Some people say that Daisy is a victim of both Tom Buchanan and James Gatsby, but this interpretation of her fails to take into account everything we learn of her personality and the way she attempts to manipulate those around her to assure her own security and comfort in life.

Don't use plagiarized sources. Get your custom essay on
“ Character Daisy Buchanan is Victim or Villain ”
Get custom paper
NEW! smart matching with writer

Daisy is responsible for her own actions. She allows herself to be treated the way she is by the other characters just to ensure her own safety and make it look like she is the good person. It’s just her way of seeking money and security: the two most important things to Daisy.

When we are first introduced to the character of Daisy we realize that she thinks a lot of herself. ‘I’ve been everywhere and seen everything and done everything…Sophisticated – God, I’m sophisticated!’ She is self-centred, which is not one of the characteristics of a victim.

There is more reference in the novel that shows Daisy being more concerned with money and material goods than any deep emotions like love. Gatsby saying that Daisy’s voice is ‘full of money’ is just an example of the evidence that suggests that Daisy is a self-centred character that cares about no one but herself.

Daisy comes from a well off family, and that’s what she wants to maintain which is why she married a guy that can ensure the continuation of her background of comfortable living. The reader comes to understand Daisy’s motifs but Gatsby knew it all along.

Once he had fallen in love with her ‘he had deliberately given Daisy a sense of security; he let her believe that he was a person from the same stratum as herself – that he was fully able to take care of her’. Despite the fact that Gatsby has money, Daisy did not wait for him when he went to war even though she supposedly loved him. This just goes to show that she is so obsessed with maintaining her lifestyle that she would give up on waiting for someone she “loves” to go and find some other guy that could give her that financial security. She obviously thought that Gatsby would not be coming back from the war. She didn’t want to take that risk. ‘And all the time something within her was crying for a decision. She wanted her life shaped now, immediately – and the decision must be made by some force – of love, of money, of unquestionable practicality – that was close at hand’.

Tom Buchanan represented a lot of things that Daisy was after. He was available and not risking his life fighting in the war. She agreed to marry him because ‘there was a wholesome bulkiness about his person and his position’. She was attracted to his status and wealth and found security to her interests. The betrayal of the promise she made to Gatsby only highlights the selfish nature that Daisy tries to hide, which is proof that she is not the victim in the novel. Gatsby along with a many of the other characters are unaware of Daisy true nature, which is why he says that Daisy only agreed to marry Tom because ‘he was poor and that she was tired of waiting for him to come back from the war’, but Daisy didn’t know he was poor at the time. Daisy is not the victim but rather the villain.

Later on in the novel when Gatsby was showing Daisy around the house he stopped at his closest and started pulling out all of his expensive clothes. If he did that for any of the other characters it would look like a very arrogant move, but he knew the effect it would have on Daisy. She ‘bent her head into the shirts and began to cry stormily’ saying that it makes her sad to see such beautiful clothes. We are aware that Daisy is a person who goes off into dreamland quite a lot and associates objects with symbols. If that were the case I think that she is associating Gatsby’s clothes with his wealth, which makes her sad because maybe she thinks that she could’ve had a much better (richer) life if she had waited for Gatsby instead of marrying Tom Buchanan.

Some people may take away the responsibility that Daisy has over her actions saying that marrying Tom has made her come a victim to the crude force of Tom’s money. Daisy believed that Gatsby had money; that is why she loved him in the first place. At the time of her marriage to Tom, she had already promised to marry Gatsby, but she made the choice to break that promise and marry Tom. Even when she got a letter from Gatsby right before her wedding, she went through with it, proving that although Tom’s money may be a “crude force,” in the end she knew what she wanted. She knows that by marrying Tom the love that she could’ve had with Gatsby would be lost. This shows what is most important to her.

Daisy has no morality, she id driven by wealth and marries someone for business rather than love. Later when she is reunited with Gatsby, she plays with his affections for her knowing fully well that she would never leave Tom. She was married and had a child which put limitations on the affair she was having with Gatsby. But it wasn’t as far as Tom was with Myrtle. It was all fun and games with Daisy, until Gatsby revealed what they were doing which made her realize she went too far even though she said that she would leave Tom. Some would say that Daisy was right to stop her affair with Gatsby and staying true, as a woman, to her wedding vowels, but if she had not betrayed Gatsby in the first place then she would be more of a victim than the villain that I am trying to portray her to be.

The death of Gatsby has to be the cruellest thing Daisy has done to him. Breaking the promise and toying with his affections was nothing compared to hiding the truth from every one. She killed Myrtle which led to the death of two men. None of these suggest that Daisy is the victim, but rather, she is the cause of most of the problems that occur in the novel. She was able to keep her finance and comfortable family life by maintaining her silence even though it cost two men their lives.

Daisy is stubborn and too self-absorbed. She should have attended the wedding, because she did have some sort of relationship with Gatsby and indirectly cause his death. Plus, Gatsby didn’t tell anyone that she killed Myrtle even though he had in a way slipped it out to Nick who was too late to do anything. Daisy is a manipulator and I think that Gatsby is much more of a victim than she is.

Daisy is a character that is driven by materialistic things. Even though she had love for Gatsby money was of more importance which is why she married Tom. She is not a vicim of Tom or Gatsby, but rather, she is just a confused woman who pushes out anything that is in her way of maintaining her own selfish desires that reside in money and security. 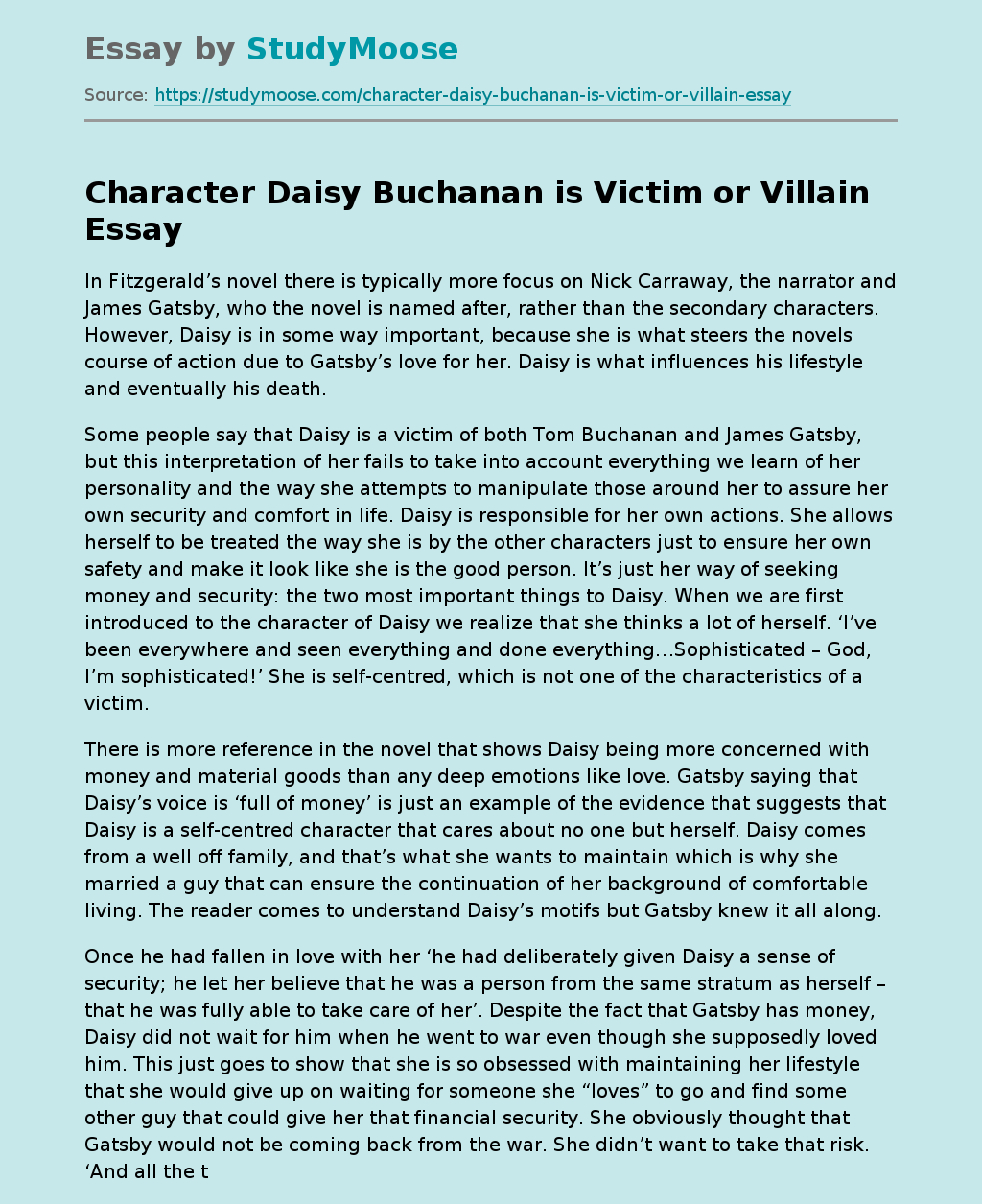