Tom and Daisy Buchanan: Corrupters of the American Dream

The elusive American Dream has been around longer than the country.  Settlers from Europe came to America in hopes for a better life.  Now people from all over the world come to the United States to live a life that is fulfilled, escape to freedom, and to make money.  They dream of America where anything and everything is possible.  However, it has been corrupted over the years.  Characters like Tom and Daisy Buchanan in F. Scott Fitzgerald’s The Great Gatsby are perfect examples of individuals who have taken what was once a beautiful objective and turned it into something that is ugly and unrewarding.

Don't use plagiarized sources. Get your custom essay on
“ Tom and Daisy Buchanan: Corrupters of the American Dream ”
Get custom paper
NEW! smart matching with writer

So what is the American Dream?  It has changed over the years, but the principle has endured.  The dream consists of the idea that if one works hard enough, anything is possible.  It is a place where wealth and fame is at everyone’s finger tips.  Or if one desires a quiet simple life, it is also there for the taking.

Many people have the idea that it is the comfortable house with the white picket fence, two cars in the driveway and two point five children.

Some see it as wealth, fame, and a name that will live on in history.  There are also those whose idea of the American Dream as the right to own land. The American Dream is not just about wealth and materialism, but also on of satisfaction, the betterment of self and society.  In the modern world, the dream can also include a stock portfolio and a 401K.

No matter what a person’s idea of the American Dream is, it is still alive and well.

The nineteen twenties, the setting for The Great Gatsby, ushered in a new set of values which altered the American Dream forever.  There were numerous new inventions, and thanks to Henry Ford, many of the inventions that had been only for the rich could now be afforded by the middle class.  The latest Jazz music, clothing styles, and the sense of recklessness of the younger generation who had just fought in a war where they had seen more death and destruction than they thought possible.

They wanted to go to lavish parties and dance until they could not.  Tom and Daisy Buchanan have what most people would consider the American Dream.  They are immensely wealthy, have servants, a beautiful but ignored child, and everything that money could buy at that time.  However, they were accidents waiting to happen because they lived the dream, but had corrupted it.

One of the principle concepts of the American Dream is to work hard to achieve what you want in life.  Tom and Daisy had both been born into wealthy families where their money and possessions had been handed to them.

When one lost that sense of life or promise – which Fitzgerald characteristically predicted on youth – then life lost its sense of wonder, its splendor, its romantic promise.  To desire was, ironically, more important than to have.  The man who had great wealth (Tom Buchanan) of the man who was beaten by life (George Wilson) lacked the intensity of experience of a Gatsby who was a “son of God” and who “sprang from his Platonic conception of self,” as the novel tells us. (Leham 30)

Many wealthy people have made their children work in their companies so that they would know the value of money as well as learn the workings of what they will inherit.  These children of wealth seem to continue to do well in life.  Tom had never worked for anything so he is a thirty year old teenager.  Work is beneficial even for the wealthy if one wants to stay wealthy.

When one is wealthy they have a responsibility to give back to the society that afforded them the dream.  Tom did not fight in World War I because he was attending Yale.  The narrator, Nick, went to Yale and fought in the war.  Tom chose not to fight for the country that had given him all of the privileges he possessed.  There is nothing wrong with Tom choosing to attend college instead of fight in the war if he were going to use his education for his future career or for the betterment of others.  However, Tom has absolutely no intention of using his education for good.  He only goes because that is what wealthy young men do, to party, and to hide from the war.  Most people would love to have the chance to attend Yale so that they could achieve great things.  Tom has the education and does absolutely nothing with it.

Charity has no place in the life of Tom Buchanan.  While just a generation before, men like Andrew Carnegie, John D. Rockefeller, and Henry Ford believed that it was their duty to give back to the people of America, Tom Buchanan does not.  He is concerned only of self gratification and keeping the poor destitute.  He is overly concerned that the African American race is achieving wealth in the music industry and instead of focusing on what he has, he is annoyed by the fact that these African Americans are finally getting a chance to realize the American Dream.

Tom is spoiled because he is a grown man who ignores the responsibilities of being a husband and father.  He has a mistress, Myrtle, and he leaves the upbringing of his daughter to a nanny.  Fathers are supposed to be a source of guidance and nurturing in the lives of his children, but we see no evidence that Tom takes an active role in parenting.

Daisy plays an inactive role in parenting as well as Tom.  She ignores her daughter, Pammy, and provides no nurturing and guidance.  Daisy does nothing with her money accept to gratify herself and surround herself in luxury.  She even chooses to marry Tom simply because he is wealthy and forsakes the man who really loves her because he is poor.

Daisy does nothing but waste her time.  Many women of wealth did so much for the poor and the rest of society in their charity work.  Edith Vanderbilt spent many years aiding the poor in Appalachian North Carolina.  Jane Adams founded and dedicated herself to serving at Hull House, a place to aide disadvantaged women and children.  Instead of making a difference in the world, which is another aspect of the American Dream, Daisy seems to spend her time cheating on her husband and lounging on the huge white sofa that seems to envelope her.

Fitzgerald knew that at its most depraved levels the American Dream merges with the American debutante’s dream – a thing of deathly hollowness.  Fitzgerald faces up squarely to the problem of telling us what Daisy has to offer in a human relationship. (Eble 18)

F, Scott Fitzgerald is known as the spokesperson for the Jazz Age of the Roaring Twenties.  He mastered the title because he clearly showed America what it was doing and how far off course it was taking the American Dream.  The characters of Tom and Daisy Buchanan are two of the best examples of the corruption of this famous dream in literature.  Working, self worth, and giving back to one’s society cannot be ignored in the achievement of the American Dream.  Without these elements, it is only a myth and a person will never truly be satisfied.  He/she will spend life attempting to find ways to realize his/her place in the world.  Tom and Daisy never fulfilled the American Dream because in the end they were still running away from their responsibilities.

Tom and Daisy Buchanan: Corrupters of the American Dream. (2017, Mar 08). Retrieved from http://studymoose.com/tom-and-daisy-buchanan-corrupters-of-the-american-dream-essay 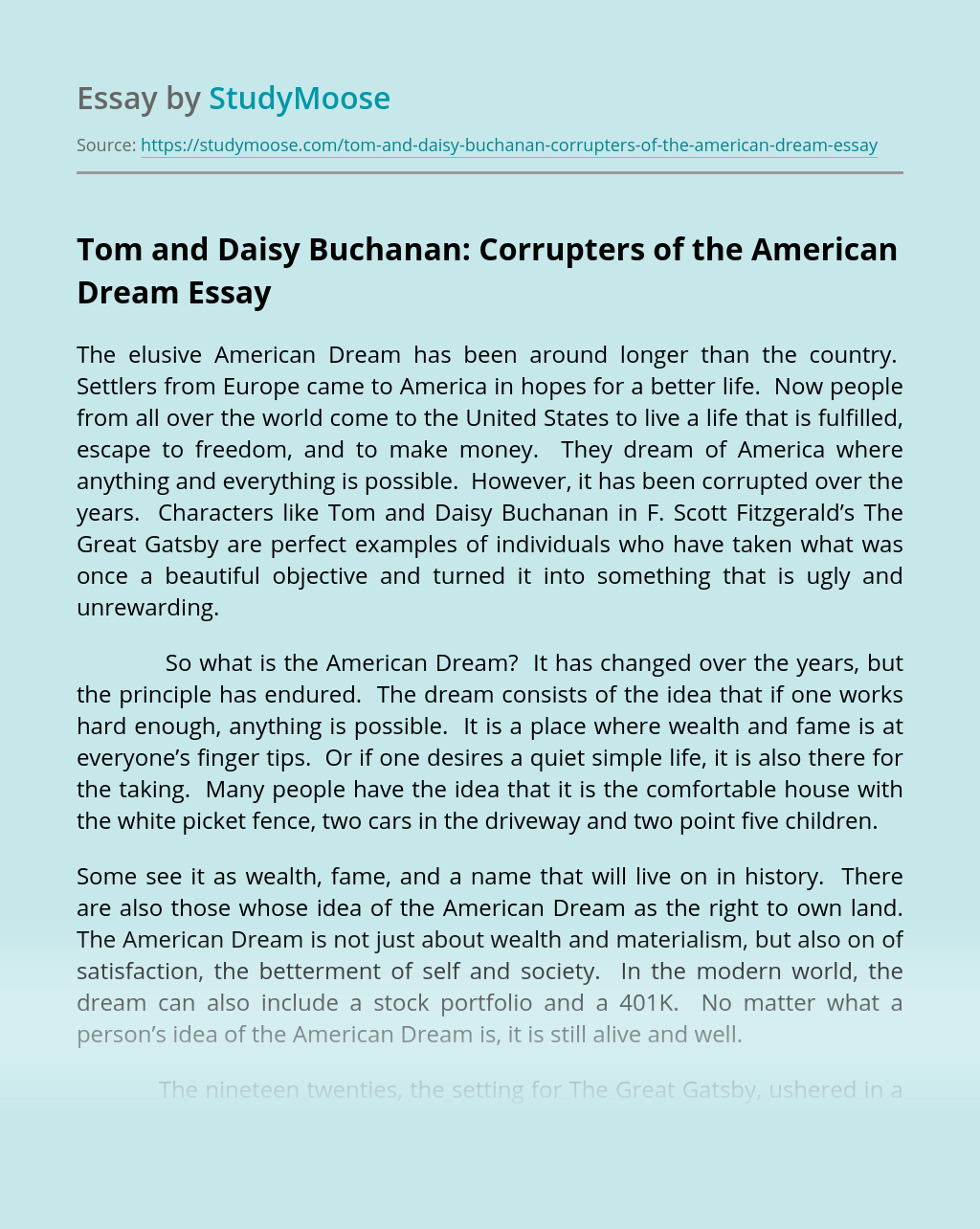