Jan 2012: “Tom Buchanan reflects important attitudes and values in real-life American society in the 1920s.” Tom Buchanan is arguably the least likeable character in Fitzgerald’s ‘The Great Gatsby’; misogynistic, cavalier in his attitude to his wife and characteristically purposeless as part of the ‘Lost Generation’, as a representative of a society he repels the reader. Is he, however, an accurate emblem of the Jazz Age? Tom himself never claims to be entirely comfortable with the new hedonistic society; instead, he seems to have a preference for remaining within the strictly stratified, pre-war society, in which social convention was more stringent and his place was assured.

Don't use plagiarized sources. Get your custom essay on
“ Tom Buchanan reflects important attitudes and values in real-life American society in the 1920s ”
Get custom paper
NEW! smart matching with writer

He was at Yale with Nick, a fact which instantly implies his social background due to the wealthy connotations of the university; and even then he had a freedom with money which was a cause for “reproach”. Nick details the “string of polo ponies” he owns – another purchase which instantly conveys the social standing of Tom.

For Tom, these are not merely possessions – they are the terms on which he approaches society. Fitzgerald deliberately includes the price of the “$350,000 string of pearls” which are his engagement present to Daisy.

Instead of showing his love as Gatsby appears to have done, Tom approaches her with a purchased, expensive object and the “external force” which she is seeking to shape her life. This also could be an indication of his ostentatious nature – perhaps further evidence of an obvious carelessness with money. In conversation, too, Tom trades on his possessions.

He converses with Gatsby about his car, and how no one else has ever “turned a garage into stables”. Although here Tom seems perfectly in keeping with the bourgeois modernity and materialistic society of the Roaring Twenties, with an explosion in consumerism fuelled by the development of mass production techniques, I believe he is still representative of more conventional times.

The “turning [of] a garage into stables” is very plausibly a metaphor for his desire for life to return to an age where his social superiority, represented by “polo ponies” and “pearls”, was not in question from the nouveaux-riches (like Gatsby, often bootleggers – the Prohibition act of 1919 created an explosion of organised crime led by gangsters such as Al Capone and Meyer Lansky.) This insistence in the established way of doing things is also evidence in his contempt for Gatsby; he cannot credit him having gone to Oxford because “he wears a pink suit.” – Which could perhaps be an indication of underlying homophobia and a rigid pursuit of traditional values. Tom does not live the same hedonistic lifestyle as his contemporaries; although there are many instances of him drinking, he is evidently uncomfortable in the setting of Gatsby’s party. Like Daisy, it “offends” him, because the restraint and social norms which he is used to are absent.

Guests conduct themselves “according to the rules of an amusement park”, such as that of Coney Island, and it is evident that this new laxity in behaviour displeases Tom (he is threatened by the newly emancipated female and emerging liberalism – this is evident in his utter hypocrisy/narrow-mindedness. This all contributes to his role as “antagonist” within the novel). Particularly, Tom dislikes the “New Woman” who was embodied as a flapper; androgynous, liberated, who drank and philandered with men. Jordan is the novel’s key flapper, both in her absolute autonomy and her liberated lifestyle; Tom paternalistic attitude is that “her family shouldn’t let her run around as much.”

This, too, demonstrates his desire for a return to a predictable male-female relationship, which may be why Myrtle appeals to him. With her “wide hips” and sensuality, she has an unfeigned adoration of him. It is stated that the first time she saw him she “couldn’t keep her eyes of him” – she appeals to him because she typifies the traditional role of a woman in a relationship. She does not cut her hair in “strange new ways”, as do flappers, or drive as Jordan does, which is significant as the car is a motif signalling modernity throughout the novel. Tom’s unattractive personality is made repellent when he “breaks Myrtle’s nose with his open hand”, in an action which unequivocally paints him as abusive and lacking in respect for Myrtle. Significantly though, the impetus for this abuse is Myrtle’s refusal to adhere to his demands that she not mention Daisy’s name.

This, I believe, demonstrates that despite his lax morals and lack of respect for his marriage, Tom still respects old conventions – that is to say, that one ought to be faithful to and respect their wife – and dislikes when Myrtle reminds him of his failure to live up to these standards. Despite being in the midst of an affair, and Fitzgerald alleging that it is only one of many, Tom likes to style himself as a defender of old-fashioned values. Fitzgerald hyperbolically satirises this in his statement of “standing alone on the last barrier of civilisation”. However, he isn’t intellect enough to realise how fallacious this belief is. In fact, every character in ‘The Great Gatsby’ has a façade of a character, one that is artificially constructed and indicates vulnerability and a need to create a persona in order to survive. Tom’s lifestyle, despite the distaste that modern society provokes, is the antithesis of that propagated by Jefferson and the Founding Fathers.

He and Daisy “drift”, with the same passivity and lack of direction as Gatsby’s party-goers, who are “borne” to the parties with an apparent lack of deliberateness. He is neither industrious nor self-reliant; his wealth is inherited, and thus is more a character of feudal Europe – the relationship between Europe and the “fresh green breast” of America has long been complex. This misplaced association to Europe in an age where Wilson was re-elected mainly on the strength of his isolationist policy could be one reason for the “confusion” of the “simple mind” of Tom, and for his displeasure at the apparent realisation of the American Dream by socially gauche Gatsby.

Tom’s attitude to other races is another by-product of his lack of intellect and is also one that was prevalent in the 1920s. Fitzgerald satirically portrays his diatribes on the dangers of “marriage between blacks and whites” by utilising Daisy to mockingly agree with him, saying “we’ve got to beat them down”.Tom’s lectures about the dangers of being overthrown by “coloured races” is an allusion to “The Rising Tide of Colour” by Stoddard, published 1920, and this image of Tom nibbling at “the edge of stale ideas” is developed to imply that he has been tainted with the ennui and purposelessness of those around him.

These vaguely held notions appear to be, for Tom, a desperate search for sustenance and an understanding of the world; which I would contend to be evidence that he is no longer sustained only by his brute “strength”. This could be developed into an allegation that Tom has lost some of his “arrogance” and confidence in the Modernist mood of the 1920s. I would conclude that Tom is both scornful of and unable to comprehend the lifestyles and attitudes of the 1920s.

His preferences for a patriarchal, feudal society with clearly delineated social norms is evident throughout the novel; nevertheless, the uncertainty and lack of convictions has clearly affected Tom to a certain extent – he is unintentionally part of Stein’s “Lost Generation”as evidenced by his lifestyle, essentially, his “drifting” and lack of clear principals, even if he still feels uncomfortable amongst other drifters like himself. Ironically, being one of the novels success stories in terms of money/status, he clearly has no idea about ‘true’ work ethic. He offers little socially and intellectually. 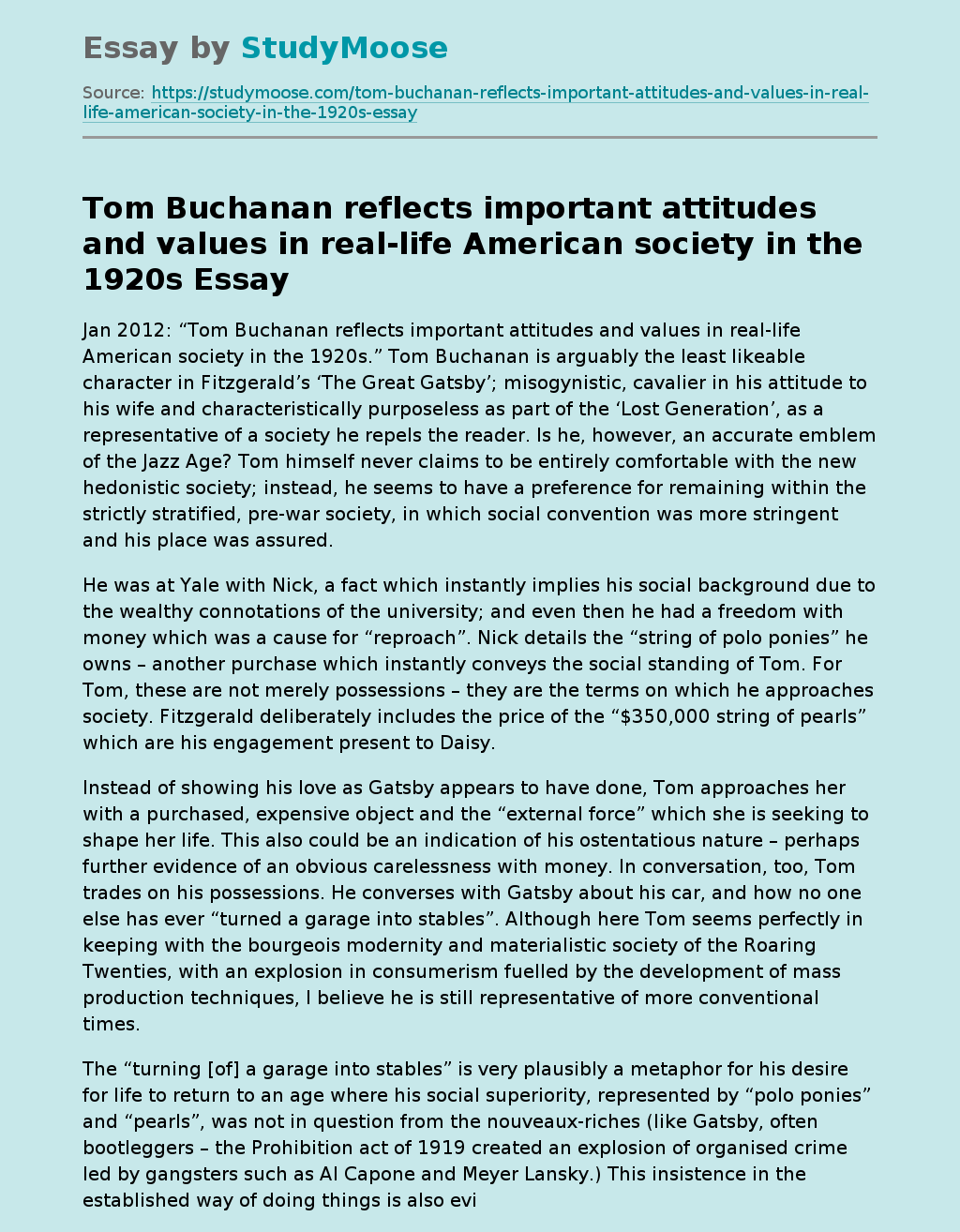