At first glance, Neighbour Rosicky appears to be a short story about a farmer and his family; however, there is much more beneath the surface. Rosicky is a representation of immigrants, in general. He is the epitome of the “American Dream,” with slight alterations. The “American Dream” is supposed to be about having a loving spouse with 2 children, a little dog, and a white picket fence; however, people have added in wealth and larger houses to the original simple dream.

Don't use plagiarized sources.
Get Your Custom Essay on “Neighbour Rosicky” by Willa Cather Just from $13,9/Page

Rosicky is a very family oriented man, and feels himself to be of no use unless he is working. Cather writes about Rosicky as a sort of emblem for the human race which is becoming lazy and degenerated. Modernist writers see that people have changed their “American Dreams” to be about greed, and their lives are not simple, people are becoming more corrupt, as a whole, and not fixating on the important, simple things in life.

Rosicky is about the simpler things in life, he is about family, and hard work; he does not feel the need to be wealthy or obtain more possessions than his neighbor.

Rosicky’s demeanor is comparable to Harper Lee’s character, Atticus Finch; in To Kill A Mockingbird, with both characters, what you see is what you get. Neighbors would whisper about Rosicky, “wondering why Rosicky didn’t get on faster. He was industrious, and so were his boys, but they were rather free and easy, weren’t pushers…They were comfortable, they were out of debt, but they didn’t get much ahead.” (1835).

I feel as though Rosicky is almost a representation of life before modernism came to life. Rosicky is happiest on a farm, living comfortably, and happily rather than in a big city, racing around and trying to “get ahead.” Cather appears to be taking a step back into a time when life was simpler and was about the finer, simpler, and more important things in life. Rosicky and his family were noted, by Dr. Burleigh “people as generous and warm-hearted and affectionate as the Rosickys never got ahead much; maybe you couldn’t enjoy your life and put it into the bank, too.” (1835).

It seems to me that the modernist way of life is about everything moving at a faster pace. The 20th century brings in technology, ideas of people needing to acquire more wealth and more earthly possessions than the next person. Life is not simple, it becomes more complex, and people lose focus of the bigger picture, of family, values, and morals. However, Cather appears to pen Rosicky as the opposite of the “typical” modern person; he does not care to acquire more wealth than the next person or have a better job, he cares about raising a good family and having the land continue down in generations to come. Rosicky almost appears to emerge as saint-like or sacred, especially after Polly’s encounter with him.

Polly, Rosicky’s daughter-in-law, finds herself through encounters with Rosicky. Polly’s revelation seems to be about the hope of redemption. In other words, it’s as though Polly is a representation of Americans, and her revelation is about hope, a hope of redeeming oneself, a hope for a better life and a better future ahead. Polly realizes, “…had a sudden feeling that nobody in the world, not her mother, not Rudolph, or anyone, really loved her as much as old Rosicky did. It perplexed her…It was as if Rosicky had a special gift for loving people…like an ear for music or an eye for colour. It was quiet, unobtrusive; it was merely there. You saw it in his eyes…You felt it in his hands, too.” (1850).

It feels and reads as though Polly has come to an epiphany, a realization that there is a better life out there, there are people in the world who care and who love with all their hearts, and sometimes there are things more important than living in a big city trying to “get ahead,” to acquire the so-called, new founded “American Dream,” there’s something in life to go after – happiness.

At the end, Rosicky dies, and is returned to the earth. He is returned to nature, and buried in the ground – a part of the land he loved so very much. Rosicky remains a part of life – neighbors and family will pass the cemetery on their way to town, his animals will eat the fodder during the winder, and “Nothing could be more undeathlike than this place; nothing could be more right for a man who had helped to do the work of great cities and had always longed for the open country and had got to it at last. Rosicky’s life seemed to him complete and beautiful.” (1852). 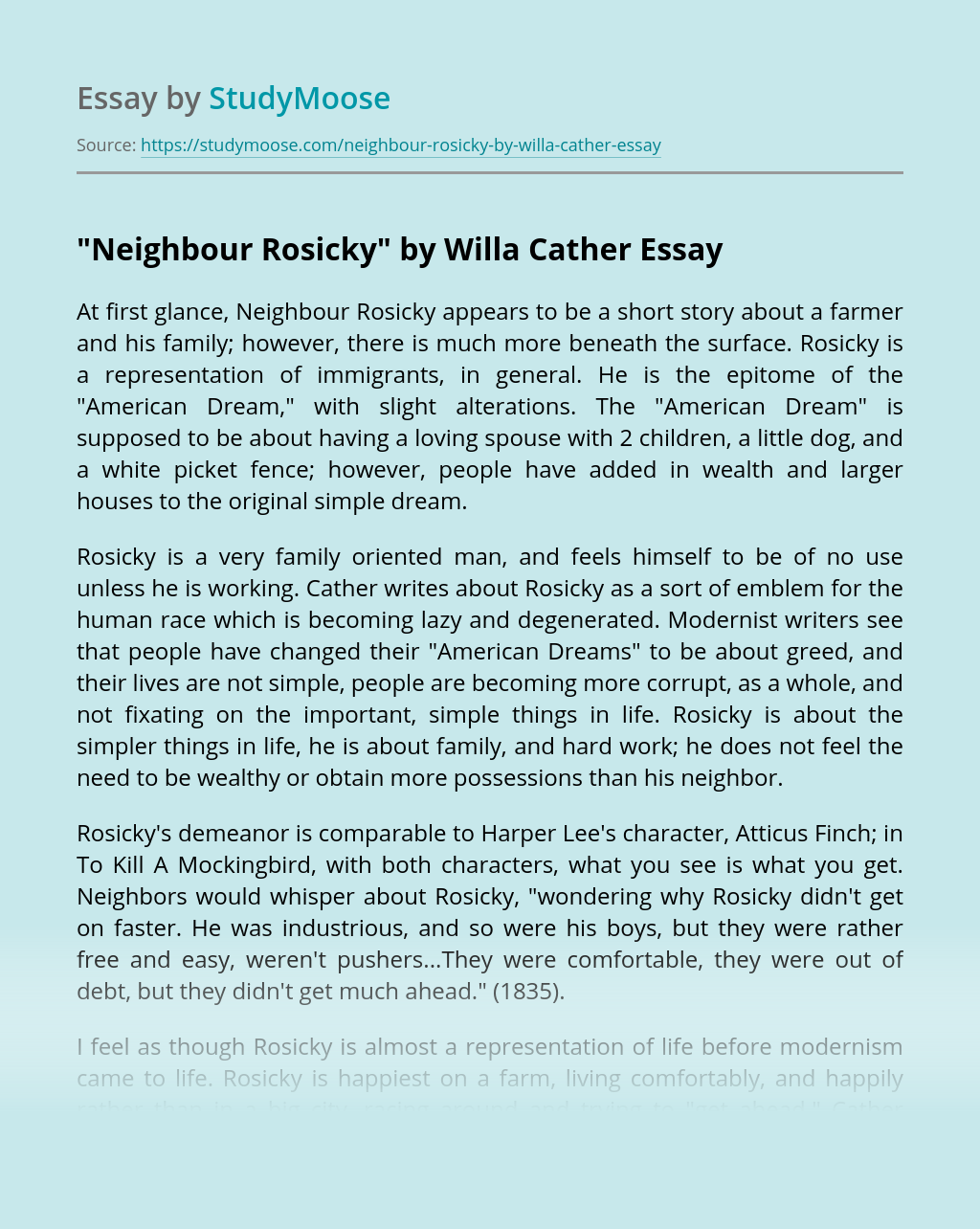 Empathy and Comprehension in "To kill a mockingbird"

Rate this post Empathy is the ability to share in or understand other‘s emotions and feelings. It is the term of emotional understanding and a special skill for individuals. This skill requires people to look at things from other people’s views. According to Atticus Finch, ‘you never really understand a person until you consider things...

Family life in To Kill A Mockingbird

Rate this post In order to appreciate To Kill A Mockingbird fully, we should be familiar with some of the background of its setting. The South in the colonial times grew into an area with large cotton plantations and small cities. Because of the necessity for cheap labour to pick and seed the cotton, Negro...

Get Essay
To Kill a Mockingbird Literary Response: Is Atticus a Good Parent

Rate this post I do not agree with the statement and i think that Attticus is not “total failure as a parent”. Although he is not the perfect role model parent, he is very responsible and easily gained the trust of Jem and Scout, something essential in every parent-child relationship. Also, even though he is...

Rate this post Nathaniel Hawthorne once said, “Words-so innocent and powerless as they are, as standing in a dictionary, how potent for good and evil they become in the hands of one who knows how to combine them.” Edgar Allan Poe is one of the many few that has a very effective style of writing....

To Kill a Mockingbird Critique

Rate this post Today, most everyone in the United States is without racial discrimination, however this was not always the case. Ellen Harper Lee’s unique, To Eliminate a Mockingbird, reminds the reader of a time in the 1930’s when prejudice existed. This traditional narrates from the point of view of a six year-old woman, Jean...

Good And Evil: "How to Kill A Mockingbird" Harper Lee

Integrity in to Kill a Mockingbird

Rate this post Integrity is having a standard of morals and ethics, and living by them. It is a willingness and ability to do the right thing even when it is hard. The story To Kill a Mockingbird is filled with integrity. For example, many of the people in Maycomb share a prejudiced sense of...

Rate this post Racism is human nature; it is hardwired into our brains. Prejudice has existed for as long as humans have; it’s almost like an instinct. Fortunately, this is false, discrimination is not part of human nature. However, this is what it seems like in Harper Lee’s To Kill a Mockingbird, a classic novel...