A pinhole camera is a simple camera without a lens and with a single small aperture – effectively a light-proof box with a small hole in one side. Light from a scene passes through this single point and projects an inverted image on the opposite side of the box. The human eye in bright light acts similarly, as do cameras using small apertures. Up to a certain point, the smaller the hole, and the sharper the image, but the dimmer the projected image.

Don't use plagiarized sources. Get your custom essay on
“ Pin Hole Camera ”
Get custom paper
NEW! smart matching with writer

Optimally, the size of the aperture should be 1/100 or less of the distance between it and the projected image. Because a pinhole camera requires a lengthy exposure, its shutter may be manually operated, as with a flap made of light-proof material to cover and uncover the pinhole. Typical exposures range from 5 seconds to several hours. A common use of the pinhole camera is to capture the movement of the sun over a long period of time. This type of photography is called Solargraphy.

The image may be projected onto a translucent screen for real-time viewing (popular for observing solar eclipses; see also camera obscura), or can expose photographic film or a charge coupled device (CCD). Pinhole cameras with CCDs are often used for surveillance because they are difficult to detect. Pinhole devices provide safety for the eyes when viewing solar eclipses because the event is observed indirectly, the diminished intensity of the pinhole image being harmless compared with the full glare of the Sun itself. In the 10th century, Ibn al-Haytham (Alhazen) wrote about naturally-occurring rudimentary pinhole cameras.

For example, light may travel through the slits of wicker baskets or the crossing of tree leaves. (The circular dapples on a forest floor, actually pinhole images of the sun, can be seen to have a bite taken out of them during partial solar eclipses opposite to the position of the moon’s actual occultation of the sun because of the inverting effect of pinhole lenses.)

Alhazen published this idea in the Book of Optics in 1021 AD. He improved on the camera after realizing that the smaller the pinhole, the sharper the image (though the less light). He provides the first clear description for construction of a camera obscura (Lat. dark chamber). In the 5th century BC, the Mohist philosopher Mo Jing in ancient China mentioned the effect of an inverted image forming through a pinhole. The image of an inverted Chinese pagoda is mentioned in Duan Chengshi’s (d. 863) book Miscellaneous Morsels from Youyangwritten during the Tang Dynasty (618–907). Along with experimenting with the pinhole camera and the burning mirror of the ancient Mohists, the Song Dynasty (960–1279 CE)Chinese scientist Shen Kuo (1031–1095) experimented with camera obscura and was the first to establish geometrical and quantitative attributes for it. In the 13th century AD, Robert Grosseteste and Roger Bacon commented on the pinhole camera.

Between 1000 and 1600, men such as Ibn al-Haytham, Gemma Frisius, andGiambattista della Porta wrote on the pinhole camera, explaining why the images are upside down. Around 1600 AD, Giambattista della Porta added a lens to the pinhole camera. It was not until 1850 AD that a Scottish scientist by the name of Sir David Brewster actually took the first photograph with a pinhole camera. Up until recently it was believed that Brewster himself coined the term “Pinhole” in “The Stereoscope” The earliest reference to the term “Pinhole” has been traced back to almost a century before Brewster to James Ferguson’s Lectures on select Subjects. Sir William Crookes and William de Wiveleslie Abney were other early photographers to try the pinhole technique. Within limits, a smaller pinhole (with a thinner surface that the hole goes through) will result in sharper image resolution because the projected circle of confusion at the image plane is practically the same size as the pinhole.

An extremely small hole, however, can produce significant diffraction effects and a less clear image due to the wave properties of light. Additionally, vignetting occurs as the diameter of the hole approaches the thickness of the material in which it is punched, because the sides of the hole obstruct the light entering at anything other than 90 degrees. The best pinhole is perfectly round (since irregularities cause higher-order diffraction effects), and in an extremely thin piece of material. Industrially produced pinholes benefit from laseretching, but a hobbyist can still produce pinholes of sufficiently high quality for photographic work. One method is to start with a sheet of brass shim or metal reclaimed from an aluminium drinks can or tin foil/aluminum foil, use fine sand paper to reduce the thickness of the centre of the material to the minimum, before carefully creating a pinhole with a suitably sized needle. A method of calculating the optimal pinhole diameter was first attempted by Jozef Petzval.

The crispest image is obtained using a pinhole size determined by the formula [pic] Where d is pinhole diameter, f is focal length (distance from pinhole to image plane) and λ is the wavelength of light. For standard black-and-white film, a wavelength of light corresponding to yellow-green (550nm) should yield optimum results. For a pinhole-to-film distance of 1 inch (25 mm), this works out to a pinhole 0.17 mm in diameter. For 5 cm, the appropriate diameter is 0.23 mm. The depth of field is basically infinite, but this does not mean that no optical blurring occurs. The infinite depth of field means that image blur depends not on object distance, but on other factors, such as the distance from the aperture to the film plane, the aperture size, and the wavelength(s) of the light source.

Pinhole cameras can be handmade by the photographer for a particular purpose. In its simplest form, the photographic pinhole camera can consist of a light-tight box with a pinhole in one end, and a piece of film or photographic paper wedged or taped into the other end. A flap of cardboard with a tape hinge can be used as a shutter. The pinhole may be punched or drilled using a sewing needle or small diameter bit through a piece of tinfoil or thin aluminum or brass sheet. This piece is then taped to the inside of the light tight box behind a hole cut through the box. A cylindrical oatmeal container may be made into a pinhole camera. Pinhole cameras can be constructed with a sliding film holder or back so the distance between the film and the pinhole can be adjusted. This allows the angle of view of the camera to be changed and also the effective f-stop ratio of the camera. Moving the film closer to the pinhole will result in a wide angle field of view and a shorter exposure time.

Moving the film farther away from the pinhole will result in a telephoto or narrow angle view and a longer exposure time. Pinhole cameras can also be constructed by replacing the lens assembly in a conventional camera with a pinhole. In particular, compact 35 mm cameras whose lens and focusing assembly have been damaged can be reused as pinhole cameras—maintaining the use of the shutter and film winding mechanisms. As a result of the enormous increase in number while maintaining the same exposure time, one must use a fast film in direct sunshine. Pinholes (homemade or commercial) can be used in place of the lens on an SLR. Use with a digital SLR allows metering and composition by trial and error, and is effectively free, so is a popular way to try pinhole photography. Unusual materials have been used to construct pinhole cameras, e.g., a Chinese roast duck. By Martin Cheung Calculating the f-number & required exposure

The f-number of the camera may be calculated by dividing the distance from the pinhole to the imaging plane (the focal length) by the diameter of the pinhole. For example, a camera with a 0.5 mm diameter pinhole, and a 50 mm focal length would have an f-number of 50/0.5, or 100 (f/100 in conventional notation). Due to the large f-number of a pinhole camera, exposures will often encounter reciprocity failure. Once exposure time has exceeded about 1 second for film or 30 seconds for paper, one must compensate for the breakdown in linear response of the film/paper to intensity of illumination by using longer exposures. Other special features can be built into pinhole cameras such as the ability to take double images, by using multiple pinholes, or the ability to take pictures in cylindrical or spherical perspective by curving the film plane.

These characteristics could be used for creative purposes. Once considered as an obsolete technique from the early days of photography, pinhole photography is from time to time a trend in artistic photography. Related cameras, image forming devices, or developments from it include Franke’s wide field pinhole camera, the pin speck camera, and the pinhead mirror. NASA (via the NASA Institute for Advanced Concepts) has funded initial research into theNew Worlds Mission project, which proposes to use a pinhole camera with a diameter of 10 m and focus length of 200,000 km to image earth sized planets in other star systems. A non-focusing coded-aperture optical system may be thought of as multiple pinhole cameras in conjunction. By adding pinholes, light throughput and thus sensitivity are increased. However, multiple images are formed, usually requiring computer deconvolution. 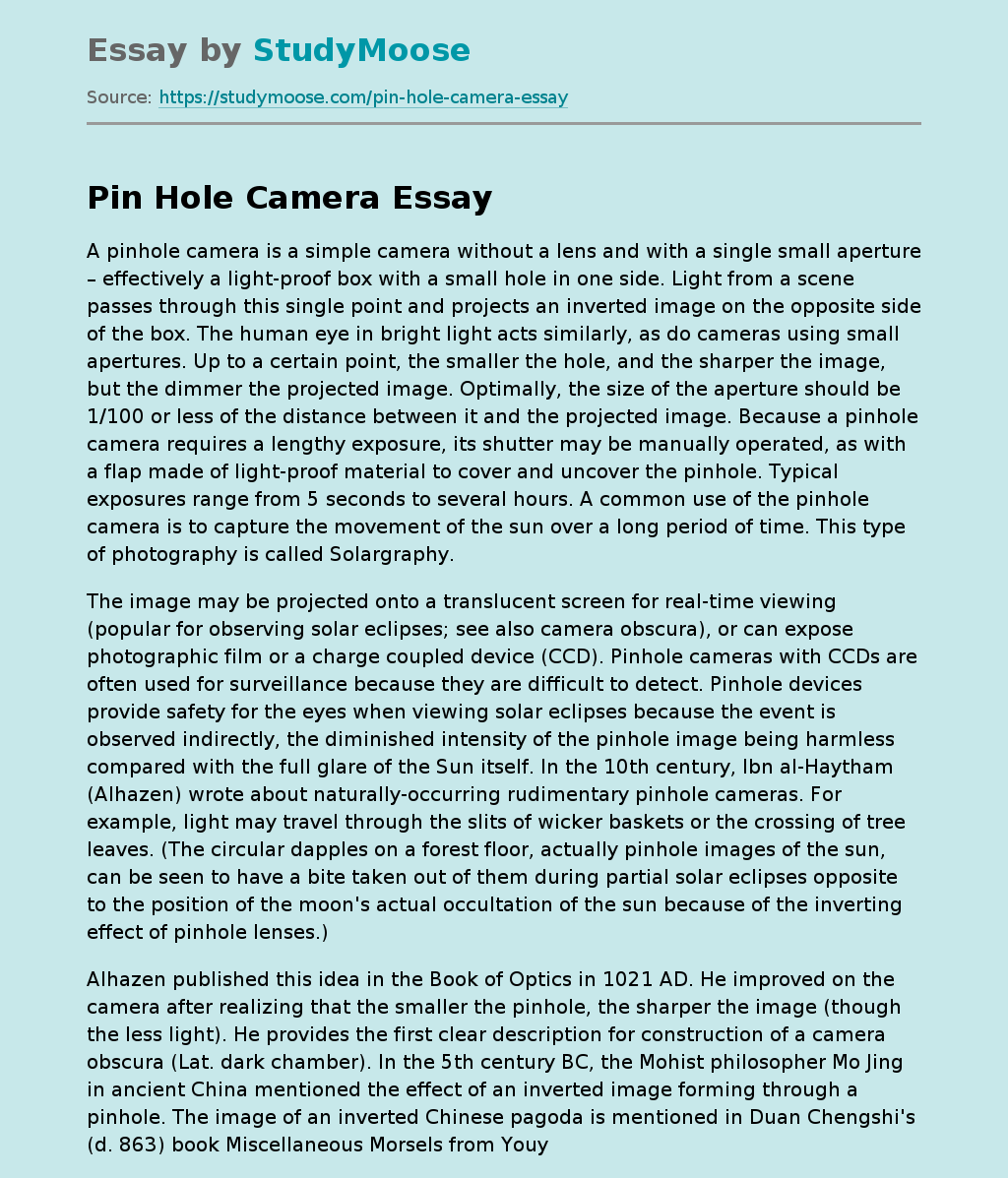