Contrary to what most people believe, voluntary simplicity does not refer to living a life that is characterized by poverty or inflicting upon oneself deprivation. Rather, voluntary simplicity also referred to as simple living is all about living a life that is examined in which one determines the things that are important, relevant and enough for them and discards the rest. This lifestyle is usually characterized by individuals reducing their consumption and pursuit of wealth.

Individuals choose to adhere to this kind of life for reasons that are usually personal such as health, need to increase time spent with family or friends, need to reduce stress, spiritual or religious reasons, frugality and personal taste (Doherty & Etzioni, 2003).

Simple living/voluntary simplicity differs from poverty in that it is voluntary while poverty is a situation that does not choose to be in.

It is worth noting that as much as asceticism which refers to a the practice of living a life that is characterized by refraining and abstaining from worldly pleasures that usually include sex, food and drinks in pursuit of spiritual and religious goals promotes and encourages voluntary simplicity, not all supporters or adherers of voluntarily simplicity/simple living are ascetics (Pierce, 2003).

The history of voluntary simplicity is believed to be related to asceticism and started with the traditions of Shramana in Iron Age India.

Religious beliefs have it that Buddha and the biblical John the Baptist were ascetics. Other people such as Mahatma Gandhi, Francis of Assisi and several others claim that they spiritual inspiration is what led them to adopt living simple lifestyles.

Many religious groups such as Quakers, Amish and shakers have practised lifestyles that omitted things such as technology and other forms of wealth for religious reasons. In fact the Quakers have a belief referred to as ‘Testimony of Simplicity’ which requires the believers to live simple lives.

Religious beliefs thus formed the foundation of voluntary simplicity (Pierce, 2003). However as stated earlier, not everyone adheres to voluntary simplicity because of spiritual or religious reasons, some individuals practice it in order to reduce the necessity of selling their time as voluntary simplicity decreases need for goods that are purchased. Such individuals use this saved time to spend more time with their family especially the children or help other people in the community.

Others use this time to improve the quality of their lives by pursuing and engaging in activities that are creative such as writing or arts (Elgin, 2000). Voluntary simplicity seeks to explain that happiness can not be bought. This is based on the fact that people usually spend so much money buying and consuming things that they think will improve the quality of their lives and make them happy yet they still remain unhappy as materialism never satisfies and in some cases increases levels of unhappiness and stress in life.

Somme forms of materialism are even considered to be unhealthy such as over indulgence in eating and drinking alcohol (Elgin, 2000). Voluntary simplicity tries to explain that people should not concentrate so much on the making of money and accumulation of wealth at the expense of the purity of their souls, the health and life of their minds, the cohesion of their family and friends and the good of the community and the society as a whole.

In the United Kingdom, the National Downshifting Week which was founded in 1995 in its campaigns at the grassroots to create awareness on voluntary simplicity encouraged those who participated to embrace the practice of living with less positively. The founder emphasizes on individuals sustainable living and downshifting which refers to individuals adopting social behaviours that enable them to live lives that are simpler in order to reduce and eliminate unhealthy practices such as overtime, stress that usually is associated with it and the psychological expense that could accompany stress (Huggins, 2007).

Downshifting also enables individuals to escape from vices such as obsessive materialism. It emphasizes on individuals balancing between leisure and their responsibilities such as work and urges them to focus their life goals on things that would bring them personal fulfilment (Huggins, 2007). It also encourages individuals to concentrate on building relationships with other people in their lives and society instead of putting all their focus in pursuing wealth hence economic success.

She explains that individuals spend time earning money when they spend a lot resulting to them spending less time with their families and friends (Elgin, 2000). This can be translated to the less you spend, the less time you need to spend earning as you do not require a lot and consequently the more time you have for your yourself and the ones you love. Another agency that advocates for voluntary simplicity is The Simple Life Network which was founded in 1996.

Amongst the things it provides are resources, examples, tools and contacts to individuals for a conscious, healthy and simple life that is restoring. Adopting a simplified diet is another way of practising voluntary simplicity (Huggins, 2007). Some of the suggested diets include the Gandhi diet. Voluntary simplicity hence means doing, living and having more with less money thus creating more time.

It also means one having joy in their hearts, being satisfied, building relationships with others in the society and having more time to spend with their loved ones and improving the quality of their lives and that one of other people in the society by helping them. It does not mean that one needs to deprive themselves, buy cheap things or be mean with money. It basically means that one has only what they need, want what they have and not vice versa and finding joy and satisfaction in having less so that one has time to reconnect with themselves and others around them. 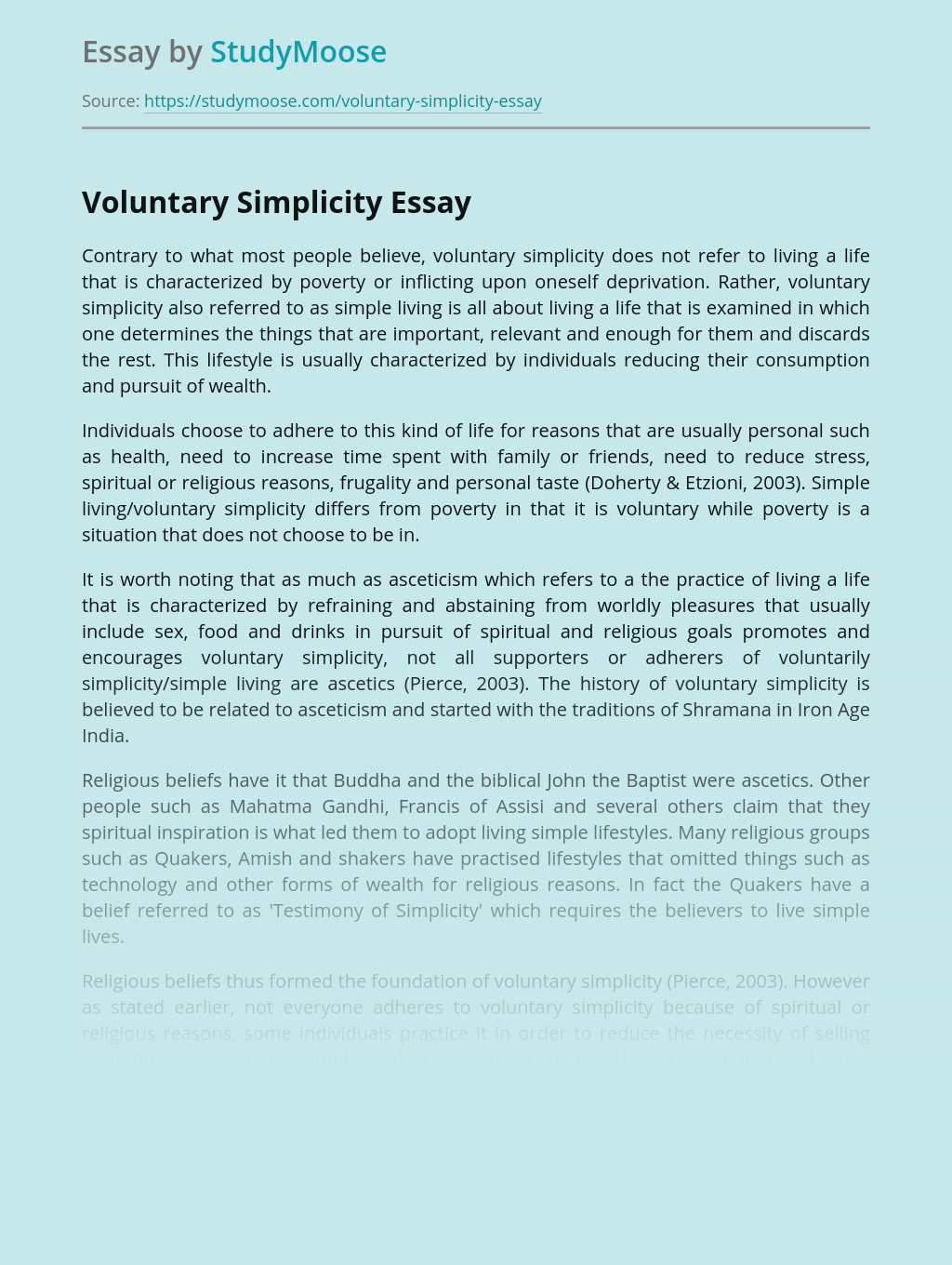