Daisy Buchanan is Nick’s cousin and Toms wife. She lives with the rich old-money population of New York on East Egg. From Nick’s first visit, Daisy is associated with otherworldliness. For example, the first image we have of Daisy in Chapter One is as one of a pair of women, lying on a couch and surrounded by fluttering, moving material – from the curtains to their white dresses, nothing is safe from the breeze blowing through the room.

This sense of constancy in a sea of movement – indicated by her being sat on “the only completely stationary object in the room… an enormous couch” – and the hints of purity or innocence attached to her – her white dress, “buoyed up” as though “though they had just been blown back in after a short flight around the house”, like an angel or fairy – combine to create an image of delicate beauty.

Don't use plagiarized sources. Get your custom essay on
“ Chapter 1 analysis of Daisy Buchanan – The Great Gatsby ”
Get custom paper
NEW! smart matching with writer

This is furthered when Daisy makes “an attempt to rise”, but contents herself with uttering “an absurd, charming little laugh”, and the declaration that she is “p-paralysed with happiness.

All of these things make her seem childlike and thus add to her appearance of purity. She speaks in a “low, thrilling voice”, a voice that holds an “excitement” that is “difficult to forget”: “a singing compulsion, a whispered ‘Listen’, a promise that she had done gay, exciting things a while since and that there were gay, exciting things hovering in the next hour.” She is routinely linked with the colour white (a white dress, white flowers, white car, and so on), always at the height of fashion and addressing people with only the most endearing terms.

She appears pure in a world of cheats and liars.

As the story continues, however, more of Daisy is revealed, and bit-by-bit she becomes less of an ideal. Given that she is fully aware of her husband’s infidelities, why doesn’t she do anything about it? Because he has money and power and she enjoys the benefits she receives from these things, she is willing to deal with the affairs. Another incident that calls Daisy’s character into question is the way she speaks of her daughter.

“I hope she’ll be a fool,” she says, “that’s the best thing a girl can be in this world, a beautiful little fool.” Clearly, she has some experience in this area and implies that the world is no place for a woman; the best she can do is hope to survive and the best way to do that is through beauty rather than brains. Daisy, however much described and elaborated on by Nick, is constantly not who she is described as and thus creates a feeling that the more she tells Nick about herself or the more Nick describes her the less we
know leaving us unsure of where she stands.

Her gayness and complete and utter satisfaction poetically described at the start of their encounter is completely wiped out by the end of the night though the way Daisy describes herself to Nick on the porch outside her house: “Well, I’ve had a very bad time, Nick, and I’m pretty cynical about everything.” Although we are almost certain that Daisy is not always cynical and more disillusioned than she thinks she is. we are uncertain on who she actually is and where her place is.

Her purity is our main aspect established in this encounter except we find it hard to understand the purity when she is exposed to a very harsh and cruel life due to Toms affair and treatment of her. Overall, we can see much of Nick’s view of Daisy summed up merely in the way that he speaks about her; he uses many emotive adjectives to excite a feeling within the reader so as to make Daisy’s energy almost tangible (“thrilling”, “glowing”, “singing”) and oxymoronic phrasing to develop some of the tension underlying her character, e.g. “tense gaiety”.

The main point we achieve in the seemingly lengthy meeting although apparently short thing that we gain from examining Daisy’s character is the first inklings of one of the major themes of the book: that riches do not seal happiness. 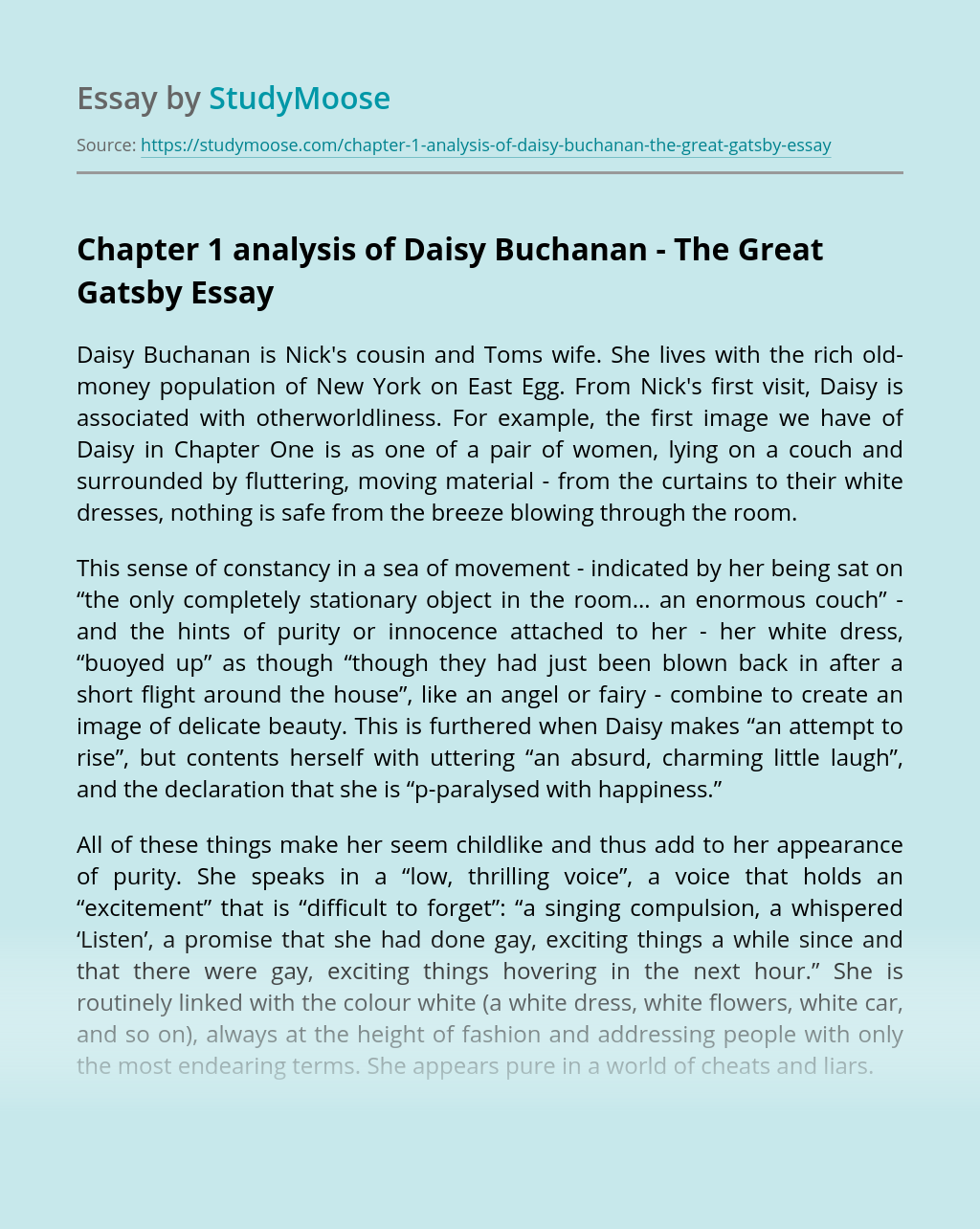