Tom and Daisy’s Relationship in "The Great Gatsby"

Tom and Daisy’s relationship was solely based on money. Daisy chose to marry Tom because he had all the wealth Daisy was accustomed to and could give/ provide her the lifestyle she has been used to growing up. Nicks states that Daisy was looking for some financial security in her life.

In Nicks exact words he says, “She wanted her life shaped now, immediately-and the decision must be made by some force-of love, of money, of unquestionable practicality” (161).

The force Nick was referring to was Tom Buchanan.

Don't use plagiarized sources. Get your custom essay on
“ Tom and Daisy’s Relationship in “The Great Gatsby” ”
Get custom paper
NEW! smart matching with writer

He came from a wealthy family and was able to provide Daisy the financial support she was seeking. As Nick says, she was flattered by his old money background and the wealth associated with Tom played a major influential decision in her choice to marry him.

“In June she married Tom Buchanan of Chicago, with more pomp and circumstance than Louisville ever knew before. He came down with a hundred people in four private cars, and hired a whole floor of the Seelbach Hotel, and the day before the wedding he gave her a string of pearls valued at three hundred and fifty thousand dollars” (80).

The emphasis that is placed on the whole floor of the elegant hotel and the way that the value of the string of pearls mentioned in accordance to its value,

highlights that Daisy’s choice of men was based on wealth rather than love. She subjects Tom into the things he possess and gives to her. The expectations of him that she creates in her head are mostly made of the things she gets from him, and the extravagance of the things he has to offer rather than Tom’s personality.

Ultimately she started a relationship based on Tom’s money and ignores the fact that she does not genuinely love him for who he is but rather the financial support and stability he can provide for her in the long run.

Tom, on the other hand, values the way people view him in society and wants to keep a certain rich persona. When looking at Tom from a far, he seems to be a well educated and hardworking man, being a graduate from Yale and having a great deal of wealth at such a young age. However, Tom Buchanan barely had to lift a finger to achieve his lifestyle, as everything was handed down to him. Evident when Nick states “His family were enormously wealthy- even in college his freedom with money was a matter for reproach” (8).

Being crowded by money all throughout his life, without working hard, material possessions has gotten to Tom’s head and influenced him to believe anything can be bought by a price.

Because of this, Tom mainly views his relationship with Daisy as an on-going investment. Since Daisy is also materialistic, by giving her a comfortable life, Daisy will stay by his side and overlook his flaws, like having an affair with Myrtle.

Which also contributes to Tom’s social standing as neither of them would not publicly announce they were having domestic troubles, but instead put on an act to seem as though everything is alright.

The more money Tom invests in Daisy, the more content Daisy is with her living conditions the likeliness of her voicing her problems publicly or confronting Tom about his affairs is close to none. And it does work. In chapter 1 when Tom goes inside to take a call presumably from Myrtle, Daisy, and I quote, “suddenly threw her napkin on the table and excused herself and went into the house” (16). Though it is obvious they do have some problems, Daisy does not say anything about it.

Overall, both Tom and Daisy were both consumed with money and all the luxuries it was connected with. Tom came from East Egg, inheriting his wealth and aspired to maintain his image. Daisy, on the other hand, married Tom for his money and the accustomed lifestyle he was able to provide her with. Tom and Daisy’s relationship is therefore based on Daisy’s desire for wealth and Tom’s maintenance of his persona, in other words money instead of love or affection.

Tom and Daisy’s Relationship in "The Great Gatsby". (2021, Mar 26). Retrieved from https://studymoose.com/tom-and-daisy-s-relationship-in-the-great-gatsby-essay 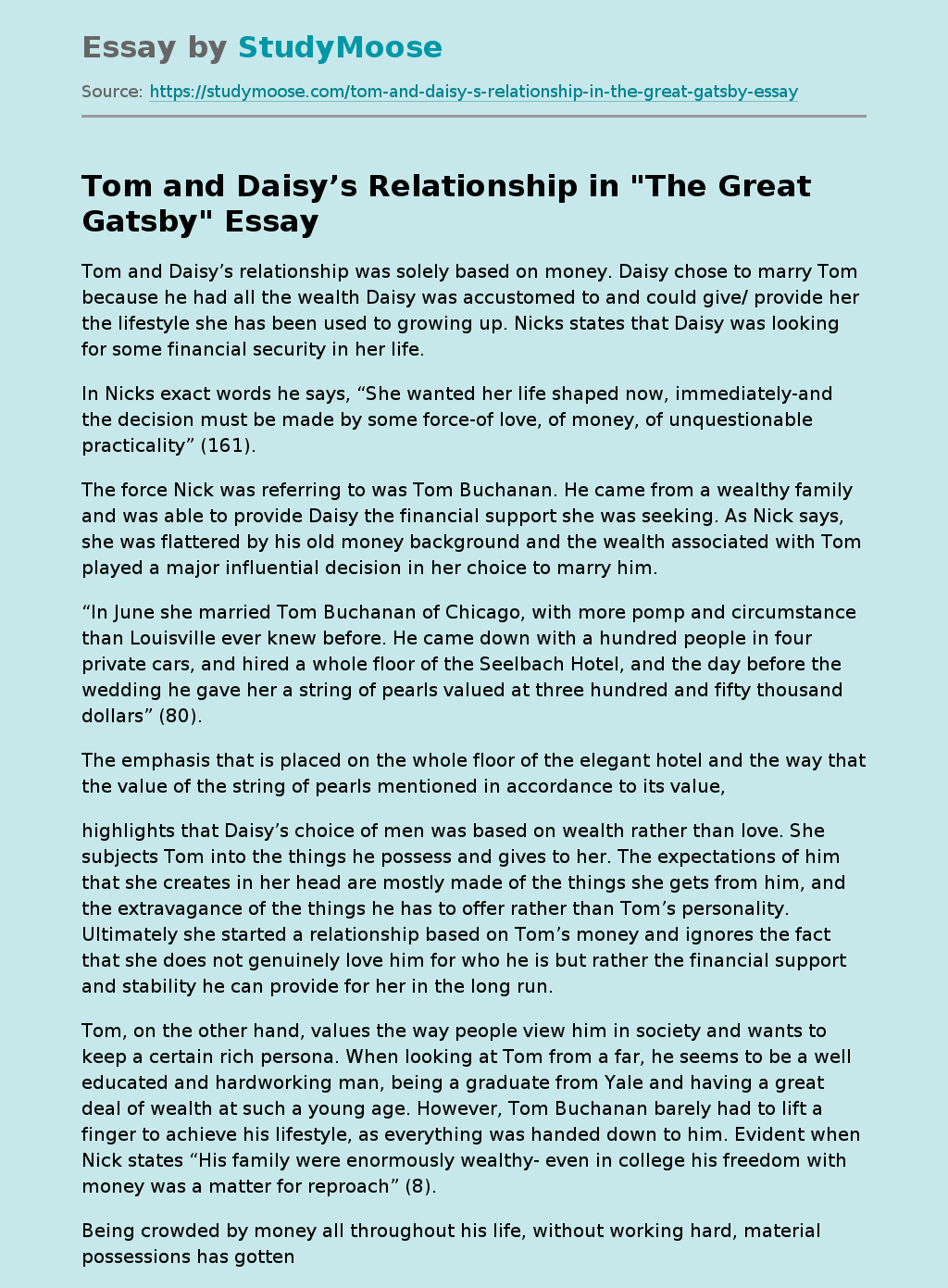