The roaring 20’s, the era where parties, alcohol, and fun were prioritized above all. When imagining this lavish time, it is easy to envision the big mansions, loads of people, flappers, drinks, music, and dancing. Nonetheless, this environment was greatly dependent on the structures of the social class established in the 1920s. In The Great Gatsby by F. Scott Fitzgerald, social class plays an extensive role in relationships throughout the novel. The effect can especially be seen with how much women depend on wealth and social status in their relationships, and how the men in the novel so greatly strive to provide it.

Don't use plagiarized sources. Get your custom essay on
“ Social Class in Daisy and Gatsby’s Relationship ”
Get custom paper
NEW! smart matching with writer

In The Great Gatsby, the social class takes a huge effect on Daisy and Gatsby’s relationship and with this, Fitzgerald demonstrates the theme that infatuation with social status will eventually lead to misfortune.

Gatsby’s rise from poverty to wealth is heavily applied to the social class aspect of the novel displaying that although individuals are capable of conquesting specific achievements, there are certain goals that are still unattainable.

In The Great Gatsby, Jay Gatsby begins as a man in love with Daisy, but not rich enough to marry her. Down the line, he comes back with newfound wealth from his questionable “hard work.” His mission in life becomes gaining Daisy Buchanan back into his life, luring her in with his riches, even though he distinctly understands that she is married. As a person, Daisy is attracted to a lot of materialistic goods, so her feelings of love towards Gatsby, after he gets rich are understandable.

Gatsby’s nice clothing, big mansion, and extravagant parties enchant Daisy into the wealthy, upper-class society, eventually pulling her away from Tom Buchanan, her husband. It is easy to say that Gatsby’s social status is what allows the prospect of a relationship with daisy to flourish. Without his class distinction, it is highly unlikely that Daisy would consider any sort of affair with him. According to “The Great Gatsby and the Obscene Word,” by Barbara Will, Jay Gatsby’s, “lies, his pretensions, and his corruption are ‘no matter’; nor his failure to bring back Daisy; what matter is the sustaining belief in the value of striving for ‘wondrous’ objects” (Will, 126). Here, the author emphasizes the point of how materialistic life in the twenties was and the fact that money was highly prioritized. The “wondrous objects” described by the author are the materialistic items that society strived so hard to obtain. Daisy Buchanan greatly longed for that quality when she stumbled back to Gatsby, she discovered that he was after all a good man, only regarding his possessions and his standing on the social ladder. Gatsby’s “rags to riches” trait allowed him to become a member of the upper class and live the American Dream. This only fueled his fantasy of a relationship with Daisy Buchanan, his perfect girl. However, their unequaled relationship did not occur, because of the corrupt idea of an altering social class. Displaying his wealth is what eventually leads to the brink of Gatsby and Daisy’s relationship. Social class was a way to define oneself, particularly in the Twenties, and throughout The Great Gatsby. The West Egg and the East Egg in this novel symbolize wealth and prosperity, while the Valley of Ashes, symbolizes the poor lower classes during the time. Since Gatsby was known for throwing such extravagant parties and having all the materialistic goods in the world, he practically had all he wanted in his life, besides Daisy’s love. Gatsby’s idea that if he was a rich man, he could get anything he wanted closely mirrored Daisies. She saw wealth as the most important, if not only, factor in a successful relationship. Will says, “Throwing into question the status of the acceptable or the normal, of the seemingly representable and meaningful, including the political and social hierarchies that sustain ‘meaning’” (Will, 127). Social class radically plays a role in all aspects surrounding a person’s life. In the novel, the most valued part in a relationship was the idea of a person’s social status. For example, in Daisy and Tom’s relationship before Gatsby was in the picture, “He came down with a hundred people in four private cars, and hired a whole floor of the Seelbach Hotel, and the day before the wedding he gave her a string of pearls valued at three hundred and fifty thousand dollars,” (75). Here, Tom managed to lure Daisy into the relationship with all his “defining items” made of luxury. The social class seemed to account for all of the actions between the relationships, however, all of these relationships had a fair amount of issues. This theme only comes to show how corrupt the social class system is. Showing off one’s person’s class will only progress a relationship so far. The way that social class defined life in the 1920s exhibits just how much of a role it played in Gatsby and Daisy’s relationship.

Social class contributed to 1920’s society immensely and was a driving factor in many people’s daily lives. The novel, The Great Gatsby, by F. Scott Fitzgerald, encompasses the environment of the 1920s and highlighted how much social stance affected the lives of Americans. In the novel, Daisy and Gatsby’s relationship mainly centered around the importance of social class and affected each of their lives significantly. With this novel, it is easy to see how the importance of Social ranking has decreased since the 1920 time period. Back then, social class was a make it or break it factor that in many cases defined people’s whole identity. Although upper and lower classes still show prevalence in modern society, they are not as apparent as they were, for example, in Gatsby and Daisy’s relationship. All In all, social class in The Great Gatsby, played an intensive role because it greatly displayed the concerning and tragic relationship between Daisy and Gatsby. 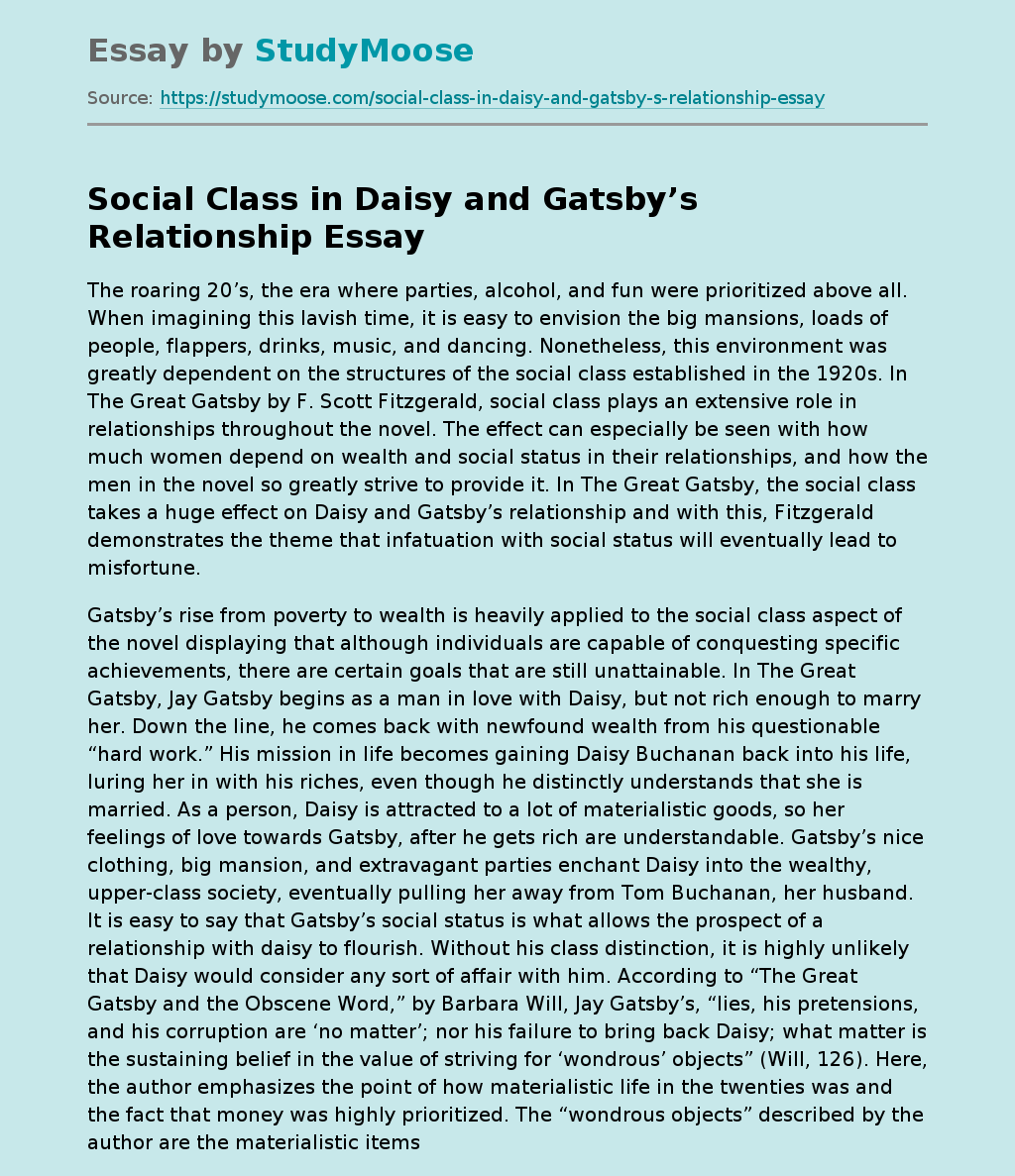