How does Fitzgerald tell the story in Chapter 5 of "Great Gatsby"?

During chapter 5 Gatsby is reunited with Daisy and it becomes clear to the reader that Gatsby’s emotional frame is out of sync with the passage of time as the novel explores the coming of love of the past into the present. The chapter starts with the return of Nick from his date with Jordan whose relationship seems very impersonal and surface deep compared and contrasted to the passionate and fulfilling relationship of that of Gatsby and Daisy that is addressed and unpicked during chapter 5.

Don't use plagiarized sources. Get your custom essay on
“ How does Fitzgerald tell the story in Chapter 5 of “Great Gatsby”? ”
Get custom paper
NEW! smart matching with writer

Nick describes Jordan to have a ‘disembodied face’ and a ‘wan, scornful mouth’ which give her a ghost like quality suggesting a transparent and empty liaison. Nick returns home to find Gatsby’s house all lit up ‘from tower to cellar’ and believes Gatsby is having another extravagant party, Nick walks over to investigate and on his way is startled by Gatsby. Nick invites Gatsby to have tea with himself and Daisy the ‘day after tomorrow’, at this Gatsby becomes very alarmed and nervous about meeting Daisy.

This brings to light Gatsby’s feelings towards Daisy and the subject becomes a sensitive one; this foreshadows their romantic connection later on in the chapter. When Gatsby first meets Daisy he is wearing a ‘silver shirt and gold coloured tie’ the colours silver and gold are closely related to wealth and this illustrates how eager he is to show Daisy how wealthy he is now.

However the colour gold could be used by Fitzgerald to show that Gatsby is corrupt, because the colour yellow symbolises corruption.

Fitzgerald uses pathetic fallacy as rain appears when Gatsby and Daisy meet for the first time which ominously foreshadows their relationship and Gatsby’s fate. When Daisy finally meets Gatsby, Fitzgerald creates an awkward tension between the two. Fitzgerald uses silences such as ‘for half a minute there wasn’t a sound’ and ‘a pause’ which was ‘endured horribly’ to create a difficult and detached atmosphere. Conversation between Daisy and Gatsby does not flow easily and is filled with ‘chocking murmurs’, ‘abortive attempt at a laughs’ and snippets of small talk. Gatsby then nearly knocks over a ‘defunct mantel piece clock’ in his agitated and jittery manor – ‘…the clock took this moment to tilt dangerously…whereupon he turned and caught it with trembling fingers and set it back in place’. This represents Gatsby’s vain and clumsy attempt to stop the passage of time in order to retrieve the past. As the clock is a defunct’ one it does not work and has stopped at one moment in time; just as Gatsby’s life has stopped. The fact that the clock is ‘defunct’ suggests that Gatsby is stuck in the past, and is deluded because he believes that his and Daisy’s relationship will be a successful one. Fitzgerald uses only two settings for chapter five in order to draw a line between the change of scene and the relationship between Gatsby and Daisy.

At the start of the chapter, Nick, Daisy and Gatsby are gathered in Nick’s house; the relationship between Daisy and Gatsby seems somewhat awkward and both characters seem extremely nervous to be reunited again: ‘I heard a sort of choking murmur and part of a laugh’. This quote proves the situation was so nerve racking to Gatsby that he had to laugh to make the atmosphere feel less intense. However, when Gatsby invites Nick and Daisy over to his house his relationship with Daisy has improved and became far more relaxed, even to the point of having a friend play the piano to impress Daisy and to keep developing their relationship. Fitzgerald tells the story in chapter five through the portrayal of society and its materialistic mindset in the 1920’s. Gatsby feels more at ease in his own home because he is surrounded by luxuries that impress Daisy, ‘shirts with stripes and scrolls and plaid in coral and apple green and lavender and faint orange with monograms of Indian blue’. The repetition of ‘and’ implies that Gatsby has a great deal of shirts, Fitzgerald is using the technique of assonance to drag out the sentence making it feel like the list is going on and on therefore creating an appearance of Gatsby having a colossal amount of possessions.

It also indicates that for Gatsby to get Daisy back, he needs to ‘woo’ her using his wealth; the use of these exotic colours implies that he has been to many places reflecting his experiences. Furthermore, he is trying to display his wealth through his amount of fine, expensive shirts to show Daisy he has completely transformed from the man he was before and can offer her all that Tom can. Fitzgerald is suggesting that now Gatsby is very wealthy, Gatsby believes that he and Daisy are equal – relating to the theme of old and new money. The sight of all these extravagant shirts brings tears to Daisy’s eyes because she realises that this is the life she missed out on, the life she could have had with Gatsby. However it could be argued that she begins to cry because money is all that is important to her. Therefore the shirt scene is significant in how it portrays Daisy’s shallow character and how
she loves a man for his wealth. Daisy is more representative of people during the decadent world of the Jazz Age. Fitzgerald concludes the chapter is with Nick being the one alone, which is a change of situation as it is usually Gatsby isolated from company.

Nick seems almost jealous of the relationship Gatsby and Daisy have. This is shown by the long sentence length used by Nick describing Gatsby and Daisy in the final stages of the chapter where they have fallen for each other. Nick uses long sentences such as ‘They had forgotten me but Daisy glanced up and held out her hand; Gatsby didn’t know me now at all’ this shows Nicks jealousy of their relationship and the sentence is broken down into three parts to show how each character is feeling. Nick feels forgotten, Daisy feels she needs someone by holding out her hand and Gatsby is shown to be madly in love by not acknowledging Nick and fixating on Daisy. Chapter 5 is presented as the turning point within the novel when Gatsby and Daisy reunite and where the green light by the deck is not a dream anymore because Daisy is with Gatsby.

How does Fitzgerald tell the story in Chapter 5 of "Great Gatsby"?. (2016, May 17). Retrieved from https://studymoose.com/how-does-fitzgerald-tell-the-story-in-chapter-5-of-great-gatsby-essay 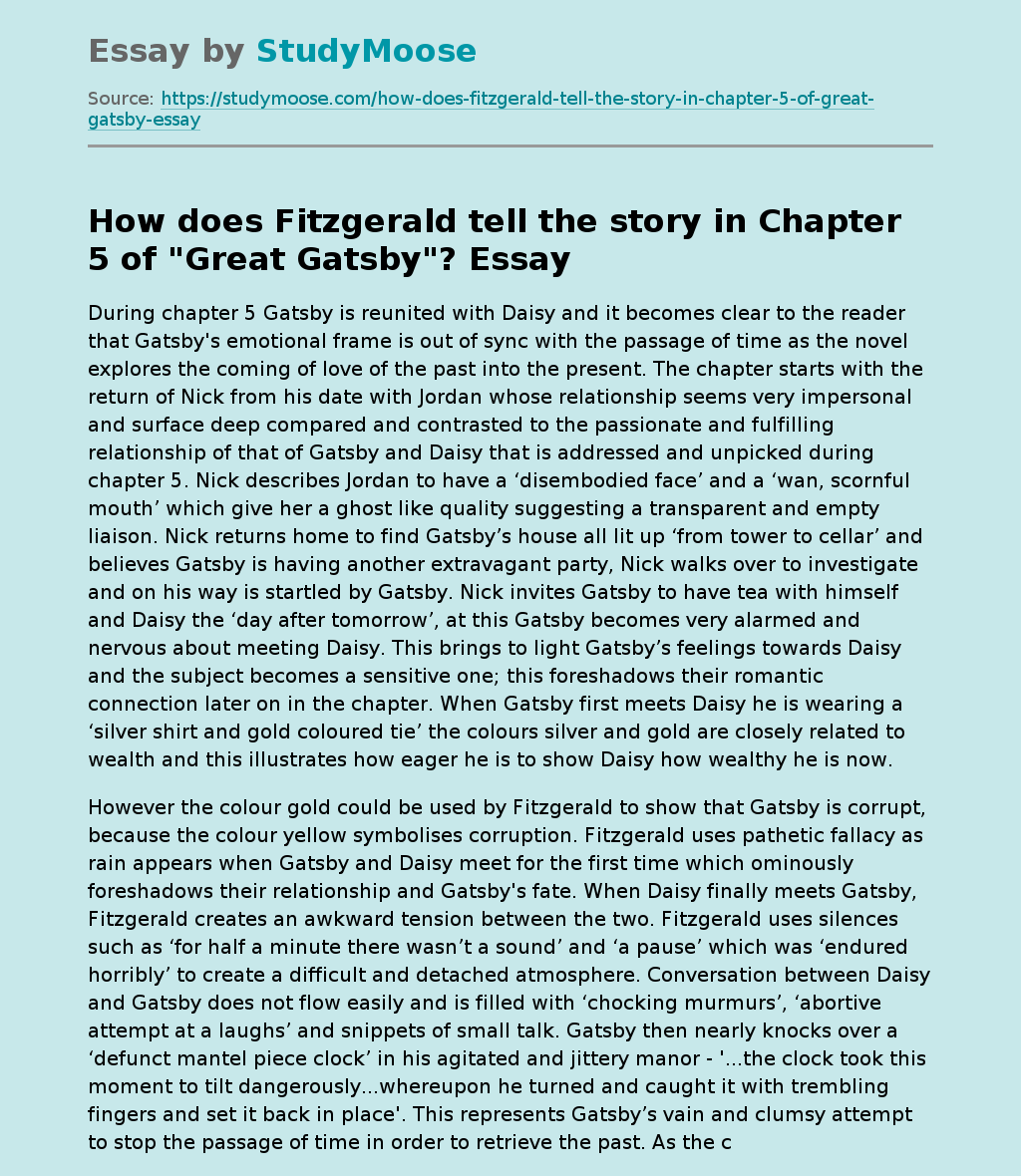