Styles within the fashion world has dramatically changed throughout the years but it has always been a popular topic whether it is in magazines, advertised on TV, or published all over social media, but have we ever thought about how the clothes we are wearing today is affecting the environment?

Even though we love our clothes it can be extremely tough to keep wearing them for a long period of time as we are tempted with an array of newness on offer in the shops that perhaps may be on sale or is perfect for that certain event coming up in the nearby future (Perry.

Don't use plagiarized sources. Get your custom essay on
“ Fashion essay ”
Get custom paper
NEW! smart matching with writer

P 2017). But before you head out or go crazy online with the “Black Friday” and “Cyber Monday” sales for those irresistible deals and discounts maybe just spare a thought for the impact of fashion on the environment because even though we don’t realise it, fashion has a major and cruel impact on the world we are living in today and the scary fact about it all is that most of the population fails to realise how this will effect our future, and in time , will get worse as years prolong if we don’t do anything about it.

Fashion focuses on speed and low costs in order to deliver new collections inspired by celebrity styles, friends or what ever new fashion trend has become popular on websites that have been greatly advertised on social media such as Instagram, Facebook, Pinterest etc (Perry.P 2018). That being said, it is particularly bad for our environment as pressure to reduce costs and the duration it takes to get a product from where it is designed to the shop floor means that environmental corners are more likely to be cut.

Major criticisms of fashion include its negative environmental impact, water pollution, the use of toxic chemicals and increasing levels of textile waste (Perry.P 2017).

Vibrant colours and prints are the obvious appealing features of clothes today, but many of these are achieved with chemicals that are highly toxic. Textile dyeing is the second largest polluter of clean water globally, following after agriculture, “Greenpece’s recent Detox campaign” has been pressuring fashion brand to take action so they will remove toxic chemicals from their supply chains, after it tested a number of branded products and confirmed the presence of such dangerous chemicals. Many of these chemicals are banned or strictly regulated in a numerous amount of countries due to them being extremely toxic and dangerous (Perry.P 2018).

More than 70 million barrels of oil is used to make polyester each year, and not only does making polyester negatively impact the environment in a massive way, but the fabric isn’t biodegradable which means when it gets thrown away, it ends up in landfills where it can take two hundred years or more to decompose or worse, it can end up in our oceans (Neelis.K 2018). Polyester is the most popular fabric used for fashion but when clothes contain polyester within them and when they are washed in domestic washing machines which results in the shredding of microfibres that increases levels of plastic within our ocean.

These microfibres then travel to the wastewater treatment plant, where up to 40% of them enter rivers, lakes and the ocean, so therefore polluting our waters. These microfibres can easily pass through sewage and wastewater treatments plants into our waterways, but because they do not biodegrade, they represent a serious threat to aquatic life. Small creatures such as plankton eat the microfibres, which is then making their way up the food chain to fish and shellfish which is eventually eaten by us humans. According to research, there will be more waste plastic in the sea than fish by 2050, unless industries clean up their act and make a big change (Messinger.L 2016).

High quality brands such as Adidas turned ocean plastic and fishing nets into trainers. H&M “Conscious Collection” is using sustainable material known as “BIONIC” which is made using ocean plastic waste collected from shorelines all around the world (Vodianova.N 2017). At the most recent Paris Fashion Week, Stella McCartney showcased looks made of recycled plastic bottles found in oceans. I believe that it’s unacceptable to charge such high premiums for clothing which don’t have guarantees that they’ve been produced in any fair or responsible ways, so I think that luxury brand companies need to wake up to their ethical and environmental responsibilities.

As I have already mentioned, the fashion industry has majorly affected the ocean and the sea creatures living within our waters but what about the animals on land?… Imagine living in a damp tiny wired cage for the majority of your life, in horrifically poor conditions, with no food or water. Then one day you are suddenly ripped from your cage, beaten and tortured to death and painfully skinned alive. Your body is then tossed into a pile, with others who have suffered the same fate.

While this scenario may seem like something from a horror movie, it is very real and happens on a daily basis to a numerous amount of animals! (Jimenez.C 2013) Each year, millions of animals are tortured and killed wrongly just for the fur on their backs. The fur trade is a heartless business that is cruel, unnecessary and extremely bad for the environment, all for the sake of fashion trends. Regardless of the source of the fur, Australian outback or Indian slaughterhouses, a torturous amount of pain goes into each fur-trimmed jacket, wool sweater or leather belt we may be wearing even today.

I cannot fathom enough that there are farms that are called “Fur Farms” where “Fur farm animals” spend their lives in those horrid damp cages I mentioned earlier but not to mention the cheapest and disgusting methods used in killing these poor unfortunate animals, including electrocution, suffocation, poisoning and gasping. All of this pain and torture us cruel humans put those helpless animals through just for the sake of fashion. One common argument for wearing fur that it is “natural” because it comes from the environment, unlike other materials produced in factories. The truth about this statement is that fur isn’t natural whatsoever, In fact, it’s a lot more harmful to the environment than one may think. Considering fur will naturally decompose with time, the fur companies apply massive amounts of chemicals to the pelts to keep them from rotting, such as ammonia, formaldehyde, chromium, and hydrogen peroxide (Gerrity.S 2010). These are all hazardous to us humans, so in my argument there is nothing “natural” about it what so ever.

In Conclusion, there are a numerous amount of negative impacts of fashion on our environment today but the main question is “Will we change for the better or will we proceed on destroying and ruining the world we live in today?”. In my opinion, I think that no matter what is said or done, our population will proceed on buying fashion products without knowing the background behind it, such as “where it came from?”, “Who made it?”, and quite possibly, “What animal was killed for it?”. I feel as though, us humans, don’t realise and quite possibly care about what way our clothes were made or where they came from but more importantly that maybe the certain jumper or scarf will keep them warm during the winter months and those harsh cold days.

Many people may not acknowledge that a simple t-shirt could have such an effect on our future. An easy method of reducing this harm on the environment is simply to just recycle. When you recycle, you conserve raw materials and natural resources, which means there is less to be extracted, refined, transported, and processed which lightens the load on Earth (MAC recycling 2009). You also conserve the energy that is needed in the manufacturing process. By recycling clothes that are no longer wanted, you are making sure that all energy doesn’t simply go to waste. Landfills aren’t just bad for the environment, they are also bad for certain budgets. Every year 12 million tons of clothing ends up in landfills where they take up a massive amount of very expensive space.

Landfills cost millions to build and millions more every year to operate them and to keep them going so recycling your clothes will also keep landfill costs down. It takes a lot of energy to produce your clothes so every item that goes through a complex manufacturing process uses an extraordinary amount of electricity and water, so by recycling your clothes when you no longer want them or if they are no longer suitable for you, you ensure that all that energy doesn’t simply go to waste as people in developing countries are lacking what we are wasting (Planet Aid 2016).

Fashion has an outrageous effect on our environment whether we realise it or not. If we begin to change our ways and look at the fashion industry differently to see its true colours we may then, and only then, begin to realise how cruel we are treating ourselves, animals, sea creatures and the world around us. A big change is needed or there will unchangeable consequences in the nearby future. 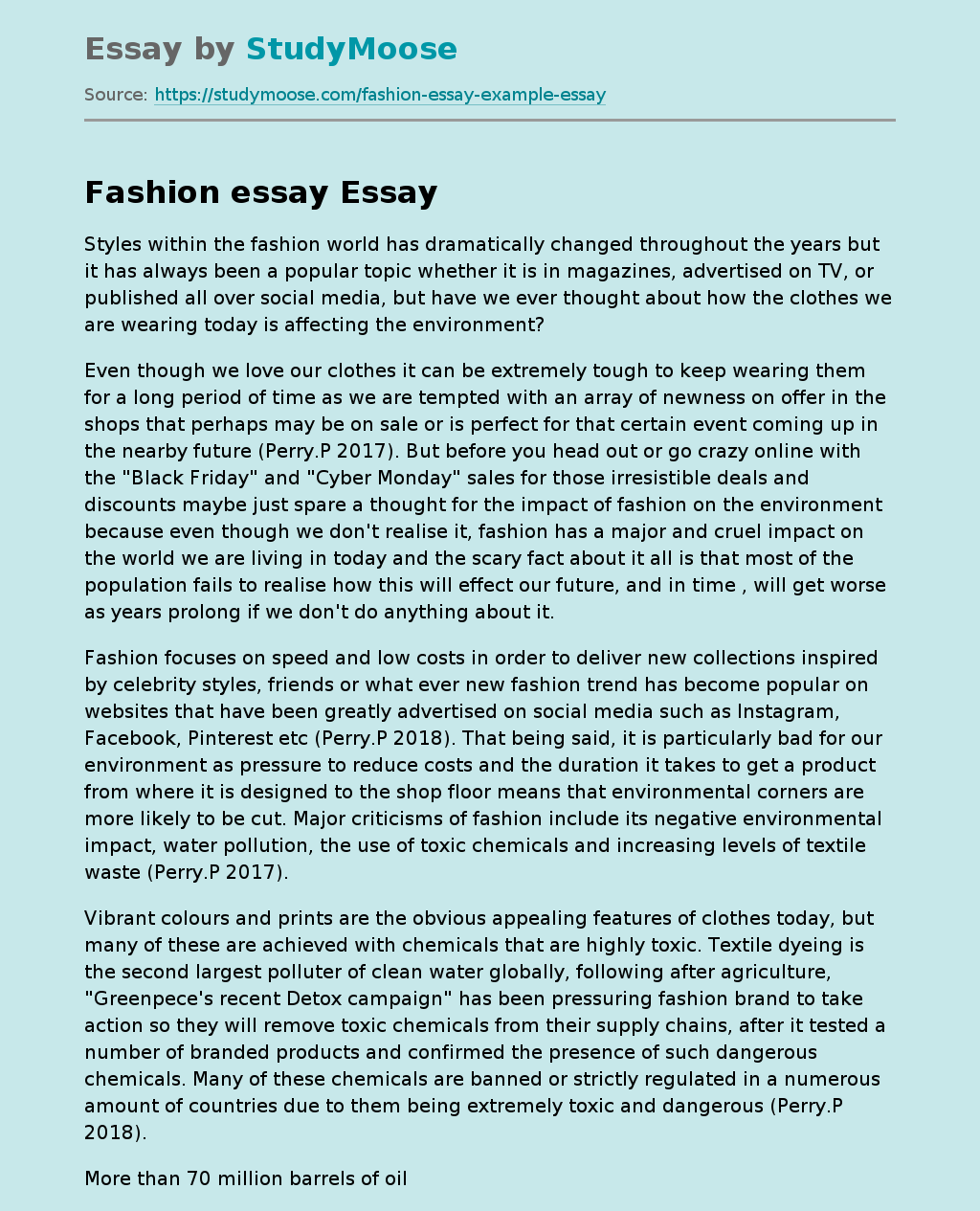