Do Curfews Keep Teenagers Out of Trouble

Do curfews keep teenagers out of trouble? This topic has always been on the cover page of today’s newspaper headlines and a hot topic that has been discussed by every family. What are curfews like? A curfew is a time frame given by an authority like a parent or the government to teenagers below 18 to be home before a certain period of time. So, ask yourself, do you think that by implementing curfews into a teenager’s life, he or she would keep out of trouble.

Don't use plagiarized sources. Get your custom essay on
“ Do Curfews Keep Teenagers Out of Trouble ”
Get custom paper
NEW! smart matching with writer

Our group has discussed and came to an agreement that curfews really do help teenagers keep out of trouble.

Firstly, curfews help teenagers to stay away from bad influences. Besides that, curfews set by parents are a way of showing that the parents care about the teenagers. Next, curfews help teenagers learn to manage what they want to do with the time that they have efficiently. According to Louise, L. (2011), teenagers are bound to meet many sorts of people once they set foot into elementary schools.

Some might consider elementary school to just be a playground for teenagers but in fact these are stepping stones for them to start developing from kids to teenagers.

As they continue to their high school, they will start to go through puberty. The males will start to develop by gaining weight and growing facial hair while the females will be more feminine and start to act more lady-like. Louise, L. (2011) also acknowledges that teenagers will have the urge to fulfill their anxiety and excitement by going out with their friends and some will develop feelings for one another during their teenage years.

Some of these people they hang out maybe be bad influences.

They would stay up till late at night to have parties at different locations that are strictly for people aged 18 and above. Yet they still sneak into clubs and bars to have a good time doing illegal things such as smoking cigarettes, weed, drinking, doing drugs and plenty of other immoral acts. Louise, L. (2011) says that curfews set by the parents enable them to control their children from joining and doing all sorts of bad doings. Parents want to implement the idea of curfews into the life of their children at a young age to prevent them from becoming a rebel and behaving badly or being spoilt.

Teenagers nowadays want to mix with their bunch of friends in school as they want to feel accepted by their friends. Parents should spend more time with their kids and prevent them from going out till late at night and mix with the wrong bunch of friends. Another factor that keeps teens out of trouble with curfews is that they learn to manage what they want to do with the time that they have efficiently. According to (Boss, 2012), teens will learn analytical skills which are one of the many characteristics of a good critical thinker.

With these analytical skills, teens will have to use these skills to rationally think of what activity or plans that they or their peers have made for the night. The curfew acts as a catalyst by which thinking analytically and critically is done with. The said curfew forces the teen into a position where a bad plan could turn out disastrous or even worse lead to punishment by their parents. The analytical skills learned by the teen through experience makes the teen able to analyze the situation and take into account other people’s suggestions.

An example would be if a teen gets an invite to a party that will last all night from a very attractive peer. As a normal teen, he does not want to pass this chance up but also remembers that his or her parents have enforced a strict 9pm curfew. But the party starts at 8pm. So now the teen has to choose between going to the party but only for awhile or not caring about the curfew. If the teen is rational enough, he or she will obey the curfew because a moment of pleasure is not worth a lifetime of suffering. Teens these days do not go down this path, but ultimately deciding to not care about the curfew.

This causes parents to force even tighter curfews on themselves until the teens learn to think analytically for their own good. One other reason why curfews keep teens out of trouble is that curfews set by parents are a way of showing that the parents care about the teen. (Boekestein, 2010) suggests that teens actually want to spend time with their parents but do not know how to. A curfew is the brainchild of parents all over the world to make sure that their teen is safe and also to be able to spend quality time with them while they still can.

Without the curfew, teens would spend all their time with their friends but miss out on the most important people of all, which are their parents. Although it might not seem that curfews are a way to spend time with the teen, it surely is. According to (Boekestein, 2010), a teen said what all teens were trying to say, which is they don’t care about other things in life, they love their parents and would like to spend more time with them than they normally do. A teen also said that he only talks to his parents in the car or during dinner as their hectic schedule demands the parents to be on their toes all the time.

As (Boss, 2012) suggests, teens should have effective communication skills to make sure that what they want and what their parents think they want are the same. This could lead to extensions of curfews or even better understanding of each other. It also helps in the long run as it improves the teen-parent relationship. Good communication skills are essential for teens to be not only good critical thinkers but also better people. A curfew functions only as a time frame to prevent teens from getting into trouble. However, it does not enlighten the teenagers to behave, to be amenable or even abide the law.

It is proven that curfews tend to backfire and even lead to more rebellion. According to experts, forming a curfew will only provoke the teenagers yet trigger their determination to rebel, as due to the lack of confidents from neither parents nor society, teenagers feel that they might as well convict something wrong neither way. Officials such as The Center on Juvenile and Criminal Justice and the US Department of Justice confirms that, setting a curfew, in reality, does not decrease youth crime rates yet most of the teenagers detained are due to breaking curfew laws compared with other crime.

Once again, proving that curfews are not effective moreover does not keep teens out of trouble. Although trouble does not have a particular time frame, however, it is well known that majority of negative activities are all carried out under the moon light, nothing good happens after midnight. We can’t deny that minimizing the spare time teenagers posses to hang out rather late at night, roaming around the streets is an effective way to prevent teenagers from getting themselves into trouble and even committing crimes.

In addition, urfews tend to knock some sense into the stubborn skull of teenagers such as respecting their parents or even practice making decisions on their own by obeying the curfew given. Teenagers fail to realize that curfews does not only benefit us by keeping us out of trouble, provides us with better time management skills and even offering us the chance to be independent nor responsible in life. Keeping yourself in line is much easier when you practice looking at the clock, knowing that someone is home to make sure that you obey the time limit. You wouldn’t want to disappoint that someone would you?

Do Curfews Keep Teenagers Out of Trouble. (2016, Nov 23). Retrieved from https://studymoose.com/do-curfews-keep-teenagers-out-of-trouble-essay 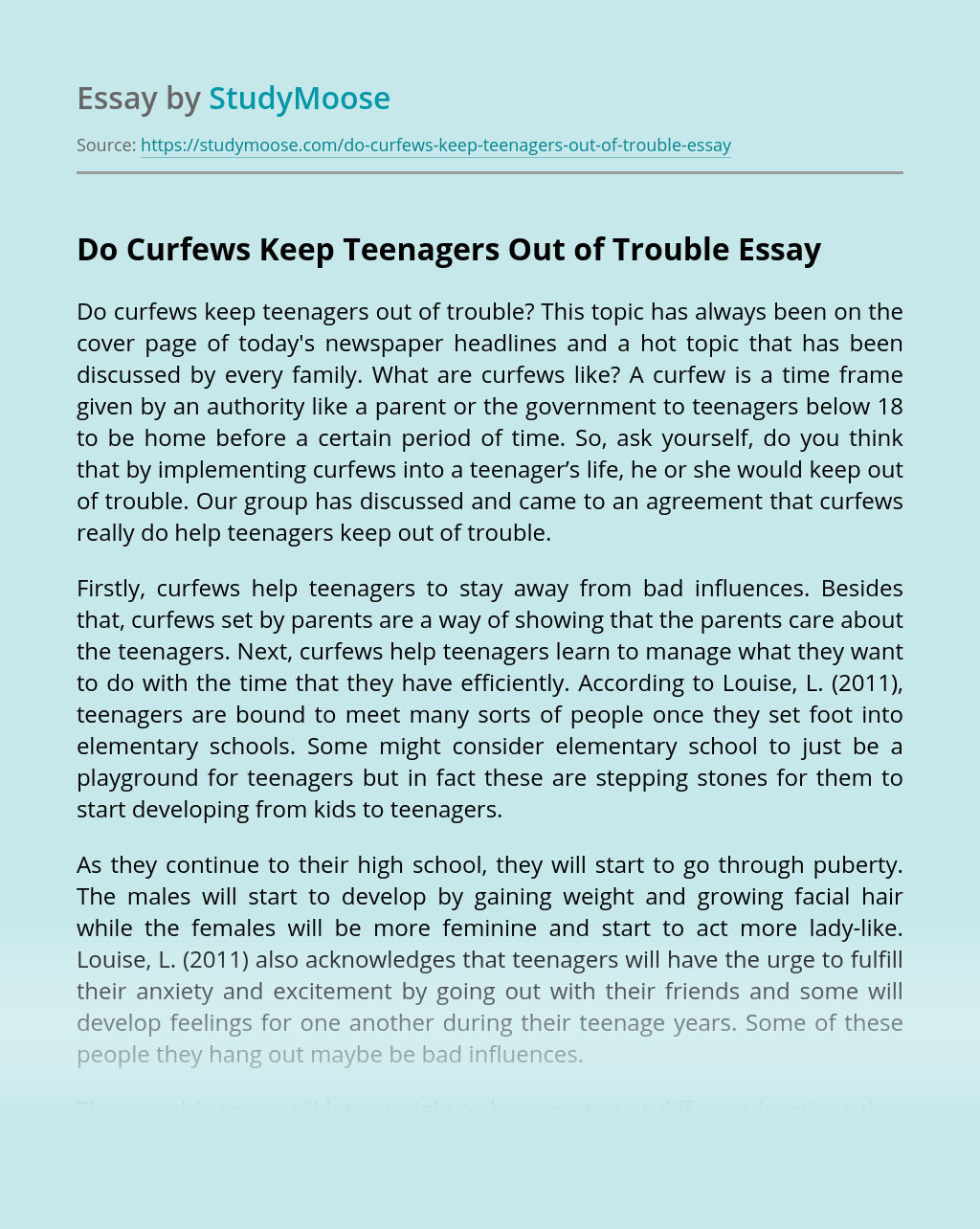