Does Boredom Lead to Trouble?

Boredom sometimes does lead to trouble. In most cases in young ages, sometimes people would actually start to think of things to do that they would know are wrong and just do it because it is something to do. I have been in example in this type of situation and got in trouble multiple times. It is as if when boredom strikes, trouble crosses my mind. When you do not feel stimulated through activity you’ll end up looking for some sort of stimulation, which could be trouble.

Don't use plagiarized sources. Get your custom essay on
“ Does Boredom Lead to Trouble? ”
Get custom paper
NEW! smart matching with writer

In my personal experience, I had gotten in trouble because of being bored and finding something stupid to do. In example, when I was in SASA the summer program for Coppin, my friends Shawan, Dominique and I were always getting into trouble because we were bored, one time we threw a party in an unauthorized place at 2am because we were bored, got caught by Ms. Perrish (the head Peer Leader) and she almost sent us home and we would not have been able to attend Coppin State University instead she took our visitation for our first semester.

It was not only us three in there it was about 20 girls in the room and we all would have been sent home but that would not have looked good on Ms. Perrish part if she would have sent us all home.

But a lot of teens are this way, they tend to get bored and do stupid things. In example, I read this essay on blogspot.

com and this girl said she tends to get in trouble as well. In her third paragraph she states, “For me, boredom can lead to trouble. Why? Because when we get bored, it is possible that we try to find something more exciting. Here are some activities we usually do when we get bored.” She makes the point that this is not uncommon and that other teens go through this.

However, my friend Dominique learned her lesson, keeps herself occupied, and stays out of trouble. On the other hand, Shawan and I, do dumb things as if we have a death wish or wish to not continue going to Coppin. We came back in the freshman year, and within a week we had a floor meeting discussing how we’re not supposed to drink and smoke on campus, I feel as if there statements about drinking on campus went in one ear and out of the other because as soon as the meeting was over, our friend Justin had kickback in his room with drinks. And it wasn’t just regular drinks it was a big cooler mixed with multiple drinks and then bottles surrounding the cooler.

Shawan and I were bored so we stayed because it was something to do. I even introduced them to the drinking game that Shawan and I made up, I swear while we were in the room something was telling me to grab Shawan and roll out but as soon as we could get ourselves up, Mr. Davis and Mr. Vital came in and raided the entire room from top to bottom. Mr. Davis took our Ids for the night and we had to get them the next day. They could have kicked us off campus but instead we have to get up at 9am on Saturdays and Sundays to clean the residence halls, we have to take alcoholic classes and our visitation is token away until 2016.

In some cases trouble can mean drugs, “Boredom and a wad of cash can lead young Americans to substance abuse, according to a Columbia University survey released Tuesday” stated by Francie Grace from cbs news. Young people ages 12 to 17 who are frequently bored are 50 percent likelier than those not often bored to smoke, drink, get drunk and use illegal drugs, said the study by the university’s National Center on Addiction and Substance Abuse. Those with $25 or more a week in spending money are nearly twice as likely as those with less to smoke, drink and use illegal drugs, and more than twice as likely to get drunk, the study said.

Some people may argue that boredom does not lead to trouble but I think it would be best to argue that boredom does not lead to trouble in certain people because it clearly leads to trouble with me and my friends. Some teens have that mentality whereas though they won’t let their boredom lead into trouble. However, according to debate.org 67% of their bloggers say yes boredom leads to trouble and 33% say no. One of the bloggers on debate.org made a point stating that, “it also really depends on the person’s life situation, because typically if they’re from a broken home stress would come along with boredom and that could cause trouble trying to find some sort of comfort.”

Boredom leads to trouble because when you do not feel stimulated through activity you’ll end up looking for some sort of stimulation; however the outlets in which we stumble upon may not be legal, safe, or logical. There are a lot of stupid things I do because I am bored, but I also believe it is because I am young and I do not care but I guess I will learn one day.

“Does Boredom Lead to Trouble?” http://www.debate.org/opinions/does-teenage-boredom-lead-to-trouble

Does Boredom Lead to Trouble?. (2016, Sep 01). Retrieved from https://studymoose.com/does-boredom-lead-to-trouble-essay 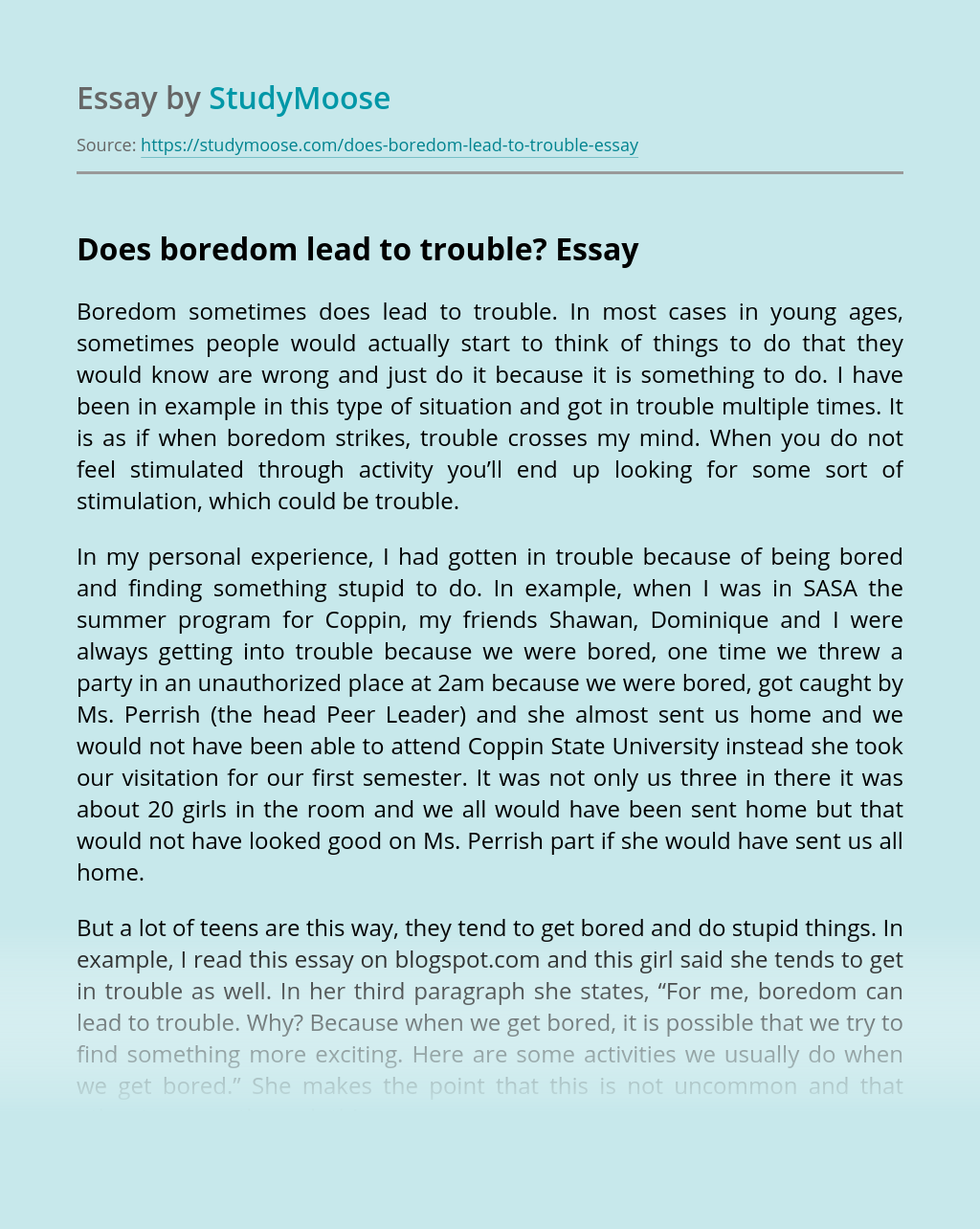