How Does Cultural Difference Lead to Conflict?

When there is a cultural difference, there is conflict within the different racial groups. Cultural difference leading to racism or stereotype is true. For me, when I first came to America from South Korea, I experienced different types of stereotypes from my high school peers. Some examples I went through were being asked why all Asians were good at math, or why our eyes were so slanted. Of course, words are just words until it offends someone. It is understandable why my high school peers would ask such questions.

Don't use plagiarized sources. Get your custom essay on
“ How Does Cultural Difference Lead to Conflict? ”
Get custom paper
NEW! smart matching with writer

It is because they are not aware of the idea that the world is like a melting pot filled with diverse people. People are not educated on different cultures; therefore, it leads to conflict. Through my personal experience of facing cultural differences and racism, I know that racism will always be a problem unless they are willing to be considerate and try to understand the different cultures around them.

In contrast to how racism leads to the conflict, one of the cultural differences that do not lead to conflict is the different styles of communication within the culture.

According to Bulletin of the Transylvania University of Brasov, Author Dana states that “the difference in communication leads to a deeper understanding and an improvement in communication skills with other culture” (279). That quote explains that students from all over the world interact with different cultures better. Then Dana further claims that “This interaction gives them to have a strong intercultural experience and improve communication skill” (279).

That statement provides evidence that when students enter a foreign country, they eventually learn about foreign culture as they meet new people. By doing so, the student sees and listen to their gesture and language of their culture and adapt to their communication style while still having their own cultural communication style. This is what nowadays organization is looking for. Intercultural communication helps employees from different ethnic backgrounds to communicate effectively with one another. Dana then points out that “companies require higher skills and competition for best employees has increased at the global level” (283). This shows how it has become problematic for students who lack the skills in employment.

Moreover, I do not agree on how different cultural law leads to conflict. According to The New Yorkers news, the author stated, “Several conflict-resolution groups that are doing similar work, amid fears that the U.S. is becoming dangerously divided”. (Chotiner) This implies the author has explained how Sharia Law brings conflict within a different culture because people who are not familiar with the Islamic culture might see as controversy topic that causes potential threat. However, these rumors have been greatly exaggerated by other culture that does not deeply understand this law. According to the New York Law School Law Review, “In U.S.A there is a campaign going on to ban the practice in Sharia. One reason what these people believe is that Sharia will take over American law” (Quraishi-landes 248). However, it is not threat in U.S.A because under the Sharia law about marriage said polygamous or the marriage of a minor child is permitted, but the states of America will not recognize these marriages as valid as a general matter of public policy. Also, outside of these situations, the legal validity of a religious marriage will depend upon the jurisdiction. In some states, it claims that “a marriage without a license is void; in others, it is voidable, leaving the possibility that with evidence of a “putative marriage” it may never be found valid” (Quraishilandes 250). So, the difference in law is not a threat within the U.S.A. Additionally, when one deeply understands the practice of the Sharia, there is a lot of misunderstanding that non-believer believes. From the perspective of Islamic jurisprudence, Sharia is the perfect Law of God, but the specific rules that are extrapolated from scripture are a human creation. An article that talks about Islamic Law, it mentions how believers follow a “societal rules: the sanctity of life, security and freedom of expression, and the inviolable”.(Kabanni) Since different people from different countries live by different rules in their country, it is clear to see how this can be a problem. For instance, the Sharia ban campaign quoting some of the offensive Fiqh rules to argue that Sharia is against human right.

Lastly, there is no way different religion leads to conflict. For example, according to Ahram Online, Yasmine states that “Muslims have before turned up in droves for the Coptic Christmas mass, offering their bodies and lives as “shields” to protect Egypt’s Christian community following the terror attacks that struck the country on New Year’s Eve” (El-Rashidi). She adds on by quoting the words that people who were there at the event. One of the people she interviewed was Mohamed El-Sawy, who was the first person to come up with the idea of a human shield. Mohamed said “We are one. This was an attack on Egypt as a whole, and I am standing with the Copts because the only way things will change in this country is if we come together” (El-Rashidi). Among the Copts, there were “movie stars Adel Imam and Yousra, popular Muslim televangelist and preacher Amr Khaled, the two sons of President Hosni Mubarak, and thousands of citizens who have said they consider the attack one on Egypt as a whole”. (El-Rashidi) In this event, there was no difference between Muslims and Christians. Everyone regardless of religion or culture comes together as one to protect each other to make the change in the world. Cultural difference such as language, societal law, and religion do not result in conflict, but rather cultural stereotypes are the causation for cross-cultural issues. The author from the book The Persistent Power of Race, states that “Racism is made up of beliefs, emotional convictions, a special kind of prejudice and a background. Also, these racial biases tend to reside in the unconscious network” (Harrison 51). It is easy to change one’s language, laws and religion to avoid conflict because one changes how they talk, overtimes laws have changed and even myself changed religion to Christianity from Buddhism. However, for racism, one cannot change it because it is impossible to change one’s background of how they’ve raised.

In conclusion, as a cultural difference exists, there will always be a conflict within the different racial group. I mentioned how simple the question of a child can be discrimination within different ethnic group and how the white privilege in America continues to bring conflict within our nation. Contrastingly, cultural difference such as language, societal law, and religions do not bring conflict because language will be beneficial for a job; societal law cannot be judged by one statement; religions protect each other to make the change. So, make sure to think about the last time you have judged someone because of their different race.

Boscor, Dana. “Strategies Adopted by British Universities in the Field of Higher Education. Lessons for Romanian Universities.” Bulletin of the Transilvania University of Brasov, Series I: Engineering Sciences, vol. 9, no. 1, Jan. 2016, pp. 279-286.

Chotiner, Isaac, and Isaac Chotiner. “A Conflict-Resolution Expert on Whether Political and Racial Dialogue Have Value in the Trump Era.” The New Yorker, The New Yorker, 7 Feb. 2019,

How Does Cultural Difference Lead to Conflict?. (2019, Nov 20). Retrieved from https://studymoose.com/how-does-cultural-difference-lead-to-conflict-example-essay 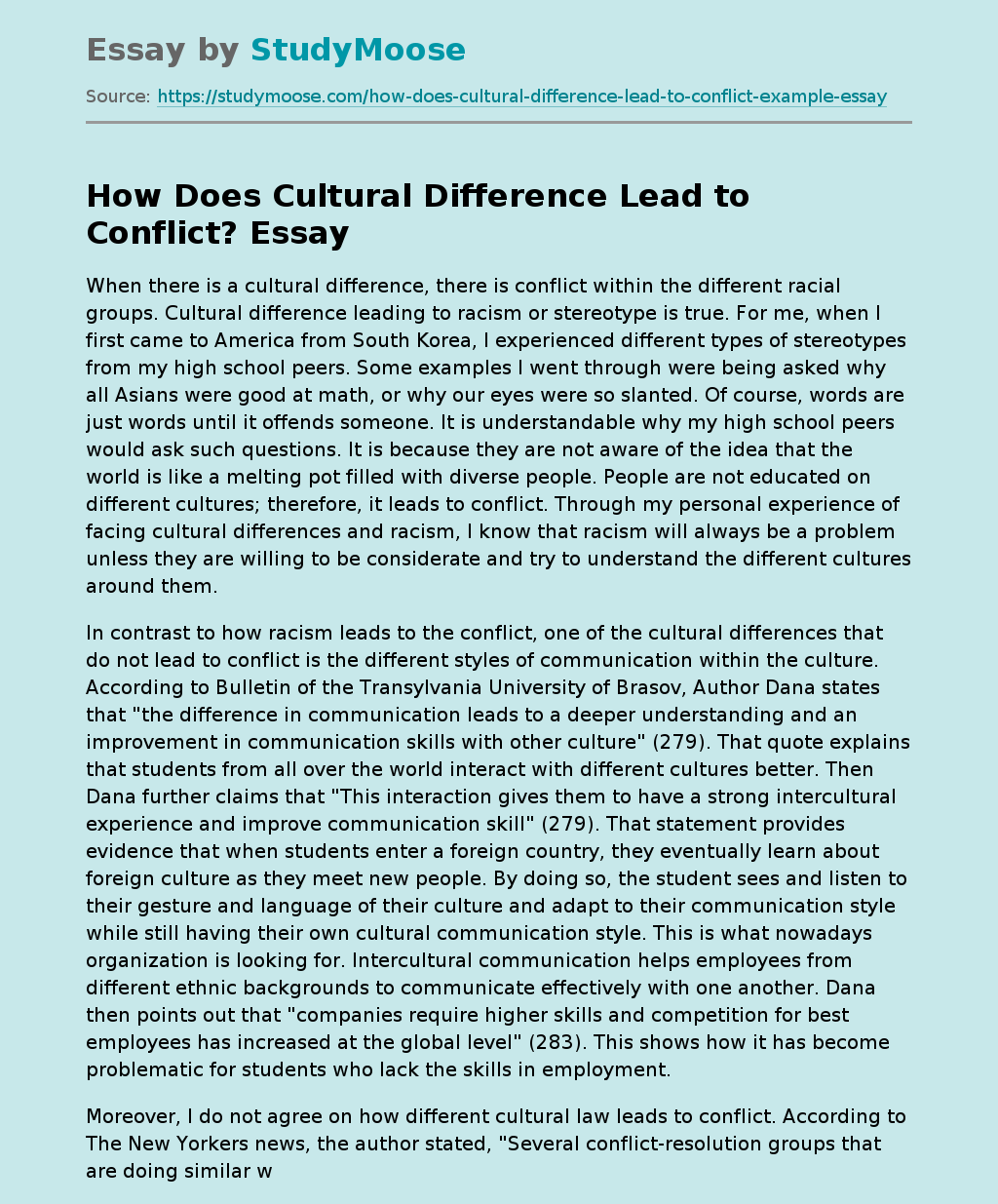