Rwanda – a country located in the Eastern block of Africa – has a rich culture, heritage, cuisine, and landscape. The country’s present situation makes it hard to believe the massacre that took place in 1994. The country saw – what the United Nations at the time refused to call – an act of genocide. Between April and July of 1994, over 800,000 Rwandans were killed.

We fear the unknown. At the point in the movie Shooting Dogs (2005) where the machete first appeared, I found myself more afraid of this new object than I was of guns in the hands of the UN soldiers or even in the hands of François when he shot Fr.

Don't use plagiarized sources. Get your custom essay on
“ Peace and Conflict and Conflict Resolution ”
Get custom paper
NEW! smart matching with writer

Christopher. In my opinion, the normalization of objects and events plays into this. When we see something constantly, it seems less harmful to us.

There are two theories that, in my opinion, would help analyse the situation in Rwanda. The first is Karl Marx’s Paradigm of Conflict Theory, and the second, Charles Horton Cooley’s Looking Glass Theory.

Marx talks about the proletariat and the bourgeoisie. He also spoke of power and equality driving social change. He spoke of historical materialism – which looks at change over time and material reality. How is production organized? Who has the money and resources? Cooley, on the other hand, talks about the looking-glass or the mirror being the way one sees himself through social interaction. Being influenced by Pragmatism and Darwinism, Cooley relied more on practicality than on theorizing. He stated that man being a social animal has the tendency to interact with the people and objects that surround him.

There are three main components of the looking-glass self; first, we imagine how we must appear to others, second, we imagine the judgment of that appearance, and third, we develop ourselves through this.

The two agencies I would like to analyse through the movie are that of religion, and media. I chose to analyse religion, particularly, as I realized that when the movie was being screened in class and the following scene took place, there was sarcastic laughter. There was a point when Fr. Christopher replied to Joe’s concern about people dying by saying, “These children might die without Holy Communion. We can do something about that”. I think one needs to understand better the context behind a sentence like that one – besides the obvious fact that Christopher was a priest. As a pre-dominantly Catholic state, the Rwandans sought solace in God throughout the massacre. While there were times when they questioned their faith, overall, they believed. Even in the hardest of times, Fr. Christopher and the Rwandans saw it necessary to pray and partake in the mass as that was all they had when everything was falling apart. Media, on the other hand, played a major role in connecting the Rwandan world with the rest of the world, and getting the story to the masses. At one point in the movie, Joe tells Marie that the media – being Rachael and Mark from BBC – is here now so no one can harm them. This validated the fact that the White World knowing about events in the third world would have a positive impact on the situation at hand.

While Marx would analyse this conflict by saying that the Hutu exploited the Tutsi because they were a superior social class when compared to the Tutsi, Cooley would further analyse this conflict and say that this exploitation would result in the Tutsi seeing themselves – through the eyes of the Hutu – as inferior. From the Marxian point of view, one could look at the situation from two views. One would be saying how the Whites had access to all the resources – safety being the most sought one. The, hence, used this privilege in their own interest by saving only the Whites from being a part of the genocide. The other would talk about the Hutu folk having an upper hand. After 30 years of the majority Hutu government persecuting the minority Tutsi people, pressure from the west resulted in a reluctant shift in power. The Hutu now had to accept – or at the least tolerate – the Tutsi. The death of the Hutu President finally gave them a chance to get back their power and, hence, exploit the Tutsi as they had been doing for decades before this.

While Marx would look at the tip of the iceberg, Cooley would dive further in to examine what the Tutsi felt during this. The first scene of the movie itself shows Hutu children throwing stones at Marie through a barbwire fence and her a nienzii – cockroach. Being human, this new reality was accepted by the Tutsi. They accepted that they were, are, and always will be inferior to the Hutu. Towards the end of the movie, too, when Marie’s father asks Charles, a soldier with the UN, to shoot them and spare them the pain of being killed by machete, one can look at this through the lens – mirror ¬- that Cooley would. Take the three components of the looking glass self. The Tutsi imagined that the Hutu saw them as inferior, they imagined the judgement of this appearance, and they accepted this judgement as their new reality and lived by it.

20 years post the genocide in Rwanda, President Paul Kagame – President of the country for over a decade – sat down with Stanford Graduate School of Business to speak about his plans for Rwanda. He highlighted the economic growth and socio-political stance of the country.

In his interview with Stanford, President Kagame expressed his concern about donors and recipients of aid. While donors saw the recipients as vulnerable and not deserving of respect, recipients relied on the aid provided. The President, however, stressed that the people know what they need and donors – like the International Monetary Fund (IMF) and the World Bank – need to give them that freedom to use the money as they feel necessary. On the other end, recipients need to focus more on using the aid received in order to get independence.

Once these systems were put in place, the country saw a change economically, politically, and socially. In the past 20 years, Rwanda’s macroeconomic performance has outperformed its peers. While Rwanda saw minimal growth – and at times a negative economic growth rate which swayed around +/-8% – the year of the genocide in 1994 saw a growth rate of -50.25%. 1995, however, saw a growth rate of 35.22%, the country’s highest since 1976 (19.5%). Between 2006-2001, Rwanda saw 1 million people get out of poverty through investments and good governance. From a political aspect, the President stressed the role of good governance and accountability of the government. In the past 20 years – along with poverty – Rwanda has seen reductions in inequality, as well. 70% of the Rwandan population is under the age of 30 years. The president stressed the importance of a youthful population contributing to development.

Marx said that the only solution is to eliminate the divide between the bourgeoisie and proletariat. Everyone is equal but some people are more equal than others. Be it socially, politically, economically, or in any other sense, trying to eliminate an existing social or economic system is too idealistic. It is not realistically possible for every person to be equal in all senses.

Cooley said until one ceases from conflict, the virtue won’t pass out of him. I interpret this simply as the fact that until one does not want to resolve conflict, conflict will not resolve itself. Without working towards eliminating something from thought, the possibility to eliminate it from practice does not arise. 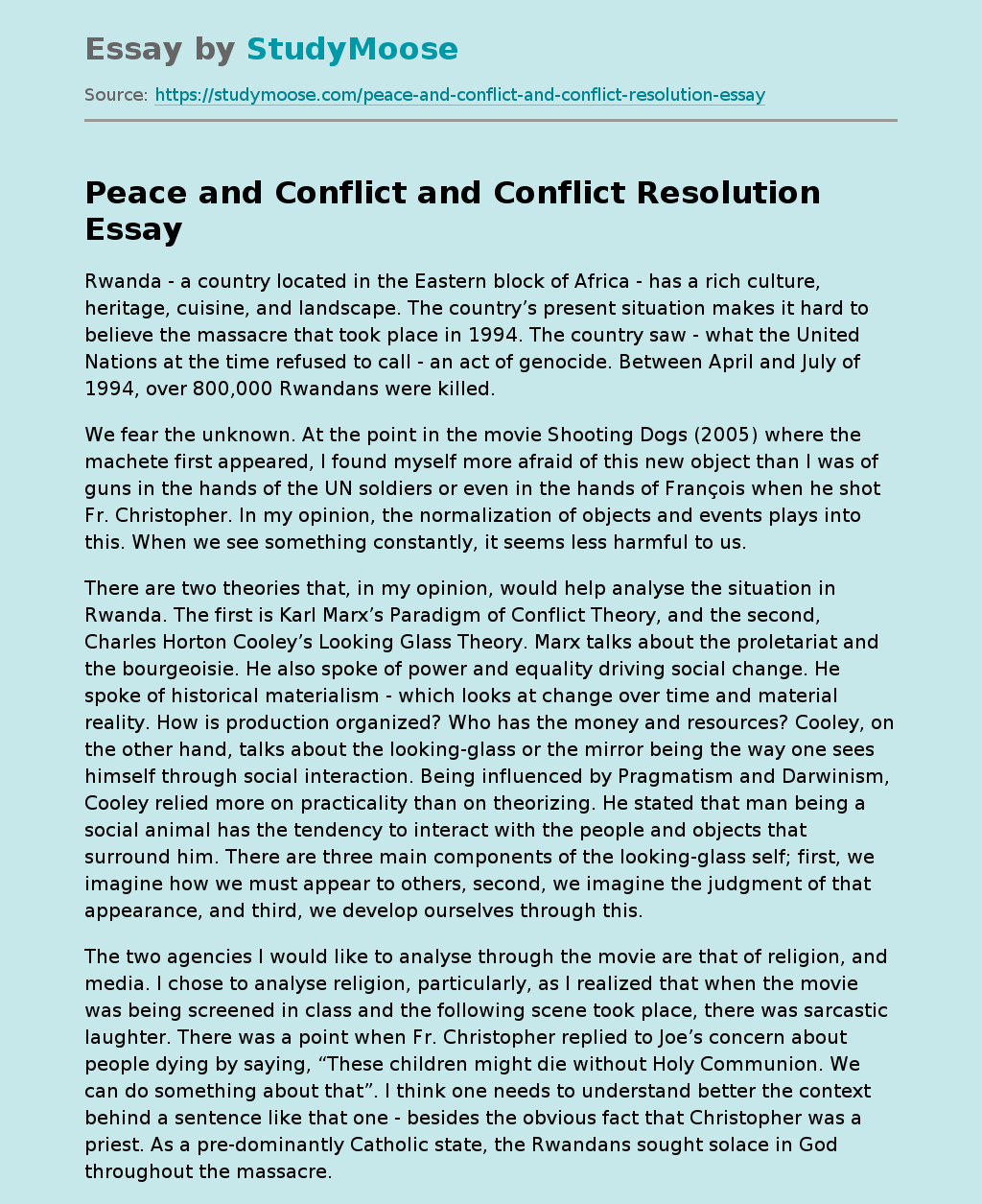