Families, employees, working teams, and ethnic groups are faced with conflict daily. Facing conflicts and having the capability to resolve them are crucial within our society. Some conflicts can be avoided, but when working in a team environment, more conflicts are apt to arise. Being able to successfully resolve conflicts within a team can be a difficult task for a team leader. Understanding the importance of conflict resolution within a team, and learning to deal with conflicts are the first skills that a team leader must master.

Don't use plagiarized sources. Get your custom essay on
“ Conflict Resolution in Work Teams ”
Get custom paper
NEW! smart matching with writer

Conflict resolution is important in a team environment because it keeps motivation, morale and teamwork positive. If your team is not motivated or proactive it may portray a negative image to your organization. Conflict within teams can cause stress as well as poor work ethics. When working within a team environment, it is important that all conflict is resolved in a positive manner. This will help ensure the team’s credibility and confidence. When a team loses its credibility, confidence, and motivation, it will be a struggle to succeed.

The team may recuperate, but the impact of the conflict may leave scars. A successful team leader must implement inspiring and motivating techniques for the team.

Conflicts within a team that are not resolved or not resolved correctly will continue to have a negative impact on the team. When the cause of the conflict has been determined, the team leader must evaluate the situation and resolve the issue in a timely manner. If the team does not have a team leader and are unable to resolve the matter within their group, they should seek mediation.

Conflict is usually viewed as negative; however, conflict can be positive. “When people work in teams, their differences is terms of power, values and attitudes, and social factors all contribute to conflict” (C. Townsley, Conflict in Work Teams)

If conflict is not successfully resolved, it can disrupt the team process; however, if conflict is managed effectively, it can benefit the group.

The following are some common methods to controlling negative conflict: Direct approach, bargaining, and enforcement of team rules. Approaching the problem head-on is usually the best method to control conflict. Confrontation can be uncomfortable, but it is best to be objective and face issues as they are. The bargaining method uses one person as a mediator for the members who are involved in the conflict. The third party helps to find a solution or compromise. Enforcement of team rules is a method that should be used when one member is not working with the team. If this method has to be used, it may be best for that person to find another team. (C. Townsley, Conflict in Work Teams)

Since the dawn of time man has been forced to negotiate his surroundings to further his very existence. His ability to negotiate, effectively, the many obstacles confronting him had profound impact on the quality of his life. Tribal (currently known as workplace teams) approaches to the issues of food gathering, providing safe shelter and co-existence with predators (fellow employees) were all basic, instinctive forms of negotiation necessary for survival.

As we enter the 21st century, our instinctive negotiation skills are faced with a more complex set of inter-personal challenges. From birth our skills are soon demonstrated. Basic feedings include communication between two parties; mother and child, in return for a warm bottle of milk the crying will stop. Hence a successful compromise has been reached and the groundwork for future negotiations has been established. So, the concept of peaceful compromise or negotiation should not be foreign to us. However, as we grow older, various factors in our life begin to shape the method in which we enter into an atmosphere of compromise or negotiation. These factors can include emotional responses to conflict such as: Jealousy, pride, ego, and anger. Negative responses to conflict only widen the gap of discontent and further illustrate the need for a positive, comprise based form of communication.

Negotiation should be defined as compromise where two parties enter into an agreement to find the best possible solution for a common dispute. The underlying approach should always be one of compromise and understanding towards achieving a common goal. Workplace teams, however, operate in complex atmosphere. Because there are many individuals assigned to a single task, each with their own approach and personal emotional issues, compromise can be misunderstood for weakness on one side and a dominating nature on the other. Thus the need for an enlightened team leader emerges with the ability to appease both sides while getting to the root of the disagreement.

Workplace teams are comprised of individuals with both varying skill sets and approaches to work related problems. Upon entering into a team-oriented problem-solving situation, each individual must rid themselves of selfish motivations; pride driven ego and jealousy based responses. Each team member must put the common goal of the team ahead of individual accolades or personal recognition. Team based negotiations can only be effective whereby personal petty traits are recognized and negative responses from such traits are controlled.

Improved listening skills will lead to effective negotiations and help to maintain a clear vision of the team goal. The breakdown of counterproductive approaches is a task that all parties must enter into willingly. Education provides the backbone for such important qualities as compromise, understanding and the ability to see and accept someone else’s point of view.

It is through enlightenment, education and compromise the approach to negotiation should be based. From the great philosopher and sometime rock star, Mick Jagger, Rolling Stones 1972, the theme song for negotiation is “You can’t always get what you want – but if you try sometimes you just might find you get what you need.”

How to successfully react to unfair criticism

Criticism is a part of every day life, and we need to learn how to deal with it intelligently. Most people react defensively to negative criticism. Rather than learn from the feedback, they become angry and make the situation worse. Reacting negatively to criticism is a mistake many of us make. Many team leaders deal with criticism daily and must react on the problem and not the criticism. With so many different litigation’s of hostile environment, it is definitely wiser to react in a professional manner. Complaining, whining and near-mutiny disrupt far too many workplaces and create tension that prevents people from doing their best work. If we criticize, or are being criticized, it is difficult to achieve peace and purpose in our work.

Our criticisms are often focused on what we look like and not on the things that will make our work better. “When we have to criticize, it should be one-on-one, not public, and not part of our daily gossip. And our criticisms should be focused on the substance of our work and not on style or our personal agenda of how things should be done”. (R. Covey, Simon & Schuster, Para 5)

Reacting in a negative manner will not only make the situation blow out of proportion, but it will make the relationship with that individual strained. Reacting negatively also limits our potential to grow.

Focusing on the character ethic in our work, and in the work of others, will help us find more peace in our workplace. It is amazing how easy it is for us to see everybody else’s faults when we cannot see our own. When we criticize others, we must do so in a positive manner and focus on the problem, not the person.

Team leaders need to use constructive criticism in order to have successful teams. Reacting to the situation and not the individual will result in a positive resolution to conflict.

Different cultures in work groups can be very challenging. Culture is defined as the shared set of values, beliefs, norms, attitudes, behaviors, and social structures that define reality and guide everyday interactions. This definition implies that culture is an attribute of a group, and also contemplates the fact that there may be as much variation within the group as between different groups. We often associate culture with a national group, however, culture includes ethnic groups, clans, tribes and organizations. Teams within organizations also have beliefs, attitudes and behaviors that constitute unique cultures.

Although there are many similarities between cultures, it is important not to minimize real differences that do exist. The majority of a group culture will confirm to a

dominant set of beliefs, attitudes and behaviors, but there will be members of the cultural group that differ in significant ways from the norm. The Individualist and Collectivist dimensions of a culture is an important aspect and is the extent to which members identify with the team rather than themselves as individuals. Individualistic cultures place a high value on “autonomy, initiative, creativity, and authority in decision making.” Collectivist cultures, on the other hand, value the group above the individual. Group conformity and commitment is maintained at the expense of personal interests. Harmony, getting along and maintaining ‘face’ are seen as crucial. The dominant culture in the USA, Canada, Western Europe, Australia, and New Zealand is individualistic, while collectivism predominates the rest of the world. In California, where the recent census found that 32% of the population is Hispanic, 7% are African American and 10% are of Asian descent, it can safely be assumed that a relatively high percentage of the workforce comes from a social environment that is collectivist.

The way each culture communicates is another important aspect in work teams. Some team members may have been socialized to reveal strong emotions and to feel comfortable with prolonged eye contact and touch. Others may be more stoic, and mask emotions with a poker face, use monotone speech and avoid eye contact. These different communication styles are not problematic in and of themselves. However, problems arise when value judgments are made on the basis of the different styles. For example, if team members disagree and one represents his views and feelings forcefully with a raised voice, another more restrained team member may see that as arrogant. The same ‘arrogant’ team member may conclude that the restrained team member is untrustworthy because eye contact is not maintained.

Another area of difference relates to directness. Some cultures are very direct. They like to ‘cut to the chase’ and get frustrated with someone who ‘beats around the bush’. Indirect cultures prefer to deal with relational aspects first, and to restore harmony before addressing substantive issues.

One challenge of working in a team environment is that it is essentially multi cultural. Another is that conflict will arise from time to time. How your team chooses to respond can often be the difference between success and failure. The importance of talking about conflict prevention and resolution issues up front cannot be overstressed. It will go a long way to the enhanced productivity that is expected from a team that is performing well. 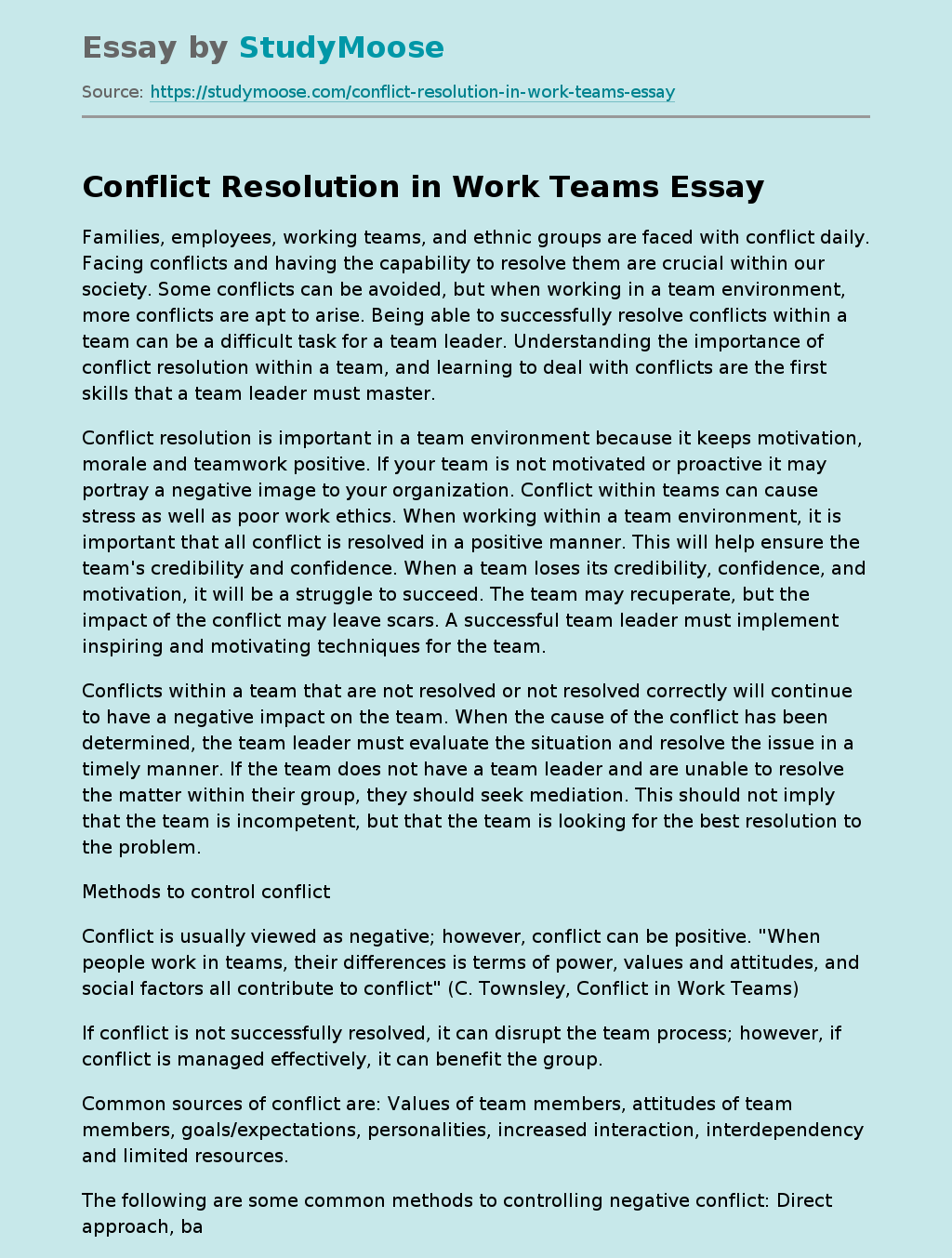