In the two poems “Out, Out-” and “Disabled”, a similar theme of loss is portrayed. Both of these poems deal with the subject of physical loss, as both protagonists of these poems experience accidental amputation. Both Robert Frost and Wilfred Owen manage to captivate their audience’s attention, and also a certain degree of sympathy for the protagonists’ misfortune. They do this successfully, with the use of common literary techniques and linguistic skills, such as simile, metaphor, personification, contrast, and many more literary devices, which range from obvious to very subtle.

Don't use plagiarized sources. Get your custom essay on
“ Theme of Loss in ‘Out, Out-’ and “Disabled” ”
Get custom paper
NEW! smart matching with writer

“Out, Out-”, written by American poet Robert Frost, is a very dark, death-related poem, which revolves around a boy, who experiences an accident which causes him to lose one of his limbs. This leads to his premature termination. After this incident occurs, people simply “move on with their affairs”, emphasizing the meaningless and worthlessness of one’s life. The title seems very ambiguous, but it is an allusion of a line from Shakespeare’s “Macbeth”.

The soliloquy is spoken when Macbeth just realises that his wife, Lady Macbeth, passed away. Macbeth compares his wife’s life with a flickering candle that can be blown out in seconds – “Out, Out, brief candle!” This soliloquy emphasizes on the insignificance and vulnerability of life, which is also one of the centre meanings of “Out, Out-”.

The author starts off this poem with a quintessentially lovely scene, describing the “sweet scented stuff” being carried by the breeze, and the Vermont mountain ranges visible under the sunset.

Contrast is frequently used in this poem. As mentioned above, the opening of the poem, being deceptively lovely, is contrasting to the darker themes, deeper into the poem. On line 23, Frost describes the protagonist boy as “Doing a man’s work, though a child at heart.” The use of contrast here shows the true reality of the boy himself, and it may possibly anger the reader, that this job eventually led to his unfortunate death, partially because he was working at such a premature age.

Frost describes this incident, as if it could have all been avoided. “Call it a day, I wish they might have said…” (Line 10) means that the family of this boy did not give him the rest of the day off, and forced him to continue on working. This gives the reader a sense of loss and misfortune, as this makes them feel like this incident could have been easily averted. Also, this quote is interesting, as it is written in the first person, and the use of first person further connects to the reader, as it seems like the author is directly speaking to them. This is clever, because it makes the reader feel as if he or she is actually watching the incident as well, further relating to it, and feeling the sorrow that comes out of it.

The sense of loss is further developed, by making the reader have sympathy for the boy. “The boy’s first outcry was a rueful laugh…” (Line 19) is a perfect example of this. This quote describes the reaction of when the boy’s hand gets accidentally sliced off, and his reaction is very contradictory. Frost’s use of the word “laugh” seems out of place, and the word “rueful” is very seldom related to laughing. This use of contrasting words makes the reader feel sympathy for the boy, as the boy, being naïve, does not know how to react properly to such a sudden serious incident.

As the poem progresses, the reader finds a much darker theme. Not only this, the reader experiences a sense of loss, as seen on line 32, which contains a very shocking quote: “Little – less – nothing!” This a blow to the reader’s mind. Within such a short sentence, the boy’s life was simply gone. This use of tripling is very effective, as it may symbolise a heartbeat, slowly beating away, to its fate. The dashes further enhance this, as they make the reader pause in the gaps between the words, making the “heartbeats” seem further and further apart, and eventually dying away.

Another quote which gives the reader a sense of loss is the final stanza of the poem: “And they, since they were not the ones dead, turned to their affairs”, in line 33-34. This quote, to put into simpler words, means that the people who were working with this young boy (who happen to be his family), had better things to do than to care for the death of this young boy, and simply turned away, and got back to work. This action seems alarmingly heartless, but nevertheless, Frost very successfully makes the jreaders feel a huge sense of loss. This line once again shows how meaningless and vulnerable life is.

Written in the 1910s by Wilfred Owen, “Disabled” is a poem describing the experience of a young soldier losing his limbs after fighting in World War I. He later gets discriminated against, and feels isolated and regretful of his naïve reason to go to war. As opposed to “Out, Out-“, “Disabled” does not have an ambiguous title at all. The word “disabled” is associated with generally negative connotations, and the that is in fact, what the poem is about: the struggles and the negative feelings of an ex-soldier who experienced accidental amputation. This poem, similar to “Out, Out-” is very dark, but unlike “Out, Out-”, there are no deaths involved. This poem contains some anti-Christian elements, and also, possible unintentional negative portrayal of women in general, particularly near the end of the poem. This poem manages to successfully captivate the reader’s sympathy and pity for the protagonist.

Unlike “Out, Out-“, a sense of negativity was portrayed from the very beginning, as Owen uses undertones like “shivered in his ghastly suit of grey.” Not only this, loss is also portrayed almost immediately in the first stanza. The sense of loss is everywhere: “Legless, sewn short at the elbow”, “Voices of boys rang saddening like a hymn”, and “Till gathering sleep had mothered them from him” all portray a serious sense of loss. This young soldier, because of his loss of limbs, tries to avoid all he happiness, because he knows he would not be happy again. Also, “saddening like a hymn” is a use of contrast and irony, as “hymns” are usually happy songs to praise the Lord, and now, it is used negatively. This may be a subtle anti-Christ proclamation, but nevertheless, it is a use of contrast and irony. In general, the first stanza makes the reader feel sympathetic to this protagonist, and this possibly adds to the sense of loss in the poem.

Also, Owen uses irony very effectively. “…he liked a blood smear down his leg, after the matches, carried shoulder high” is an example of this. Before the war, this young, naïve teenage boy was once proud of his injuries after playing football, as it was a sign of his “manliness”, and it was something that attracted the opposite sex towards him. This is very ironic, as we learn that soon, he would feel exactly the opposite about injuries. This may make the reader feel empty because of the protagonist’s naivety and fateful decision, but despite this, Owen successfully garners the reader’s sympathy towards the protagonist of this poem. In the final line, the use of repetition “Why don’t they come and put him to bed? Why don’t they come?” is very effective, as it seems like the somebody in this poem is shouting a desperate, sorrow outcry, of regret and sadness. The particular person who says this remains ambiguous: it could be the speaker, or the protagonist himself.

In this poem, there are various negative descriptions about women. Indeed, part of the reason why this naïve young soldier signed up, was because he wanted to “please his Meg”. This young soldier, as mentioned above, wanted to have pride, and wanted the opposite sex to look up to him. Owen describes the young girls as “giddy jilts”, which means women who moved on very easily. This is ironic, as when the poem moves on, this “giddy, jilting woman” leaves the protagonist, and see him as a “queer disease”, because of his loss of limbs. Owen successfully portrays the feeble foundation of a woman’s so called “unconditional” love towards a man.

Comparing these two poems, I think that “Disabled” is the poem that conveys “loss” the most effectively. There is a constant comparison between the past and the present, and this strengthens the feeling of loss, making it a lot more obvious and effective. Loss is felt throughout the entire poem, as opposed to “Out, Out-“, when the sense of loss is only really felt towards the middle and end of the poem. The sadness of the soldier is highlighted with the quote “smiling, they wrote his lie, aged nineteen years”. The women, when they see him, now “take pity wherever they may dole”, and he would never be able to hold a woman in his arms again. This adds to the feeling of loss, and also adds meaning and negative mood throughout the poem, as well as emphasizing the thinness and the shallowness of women in general. 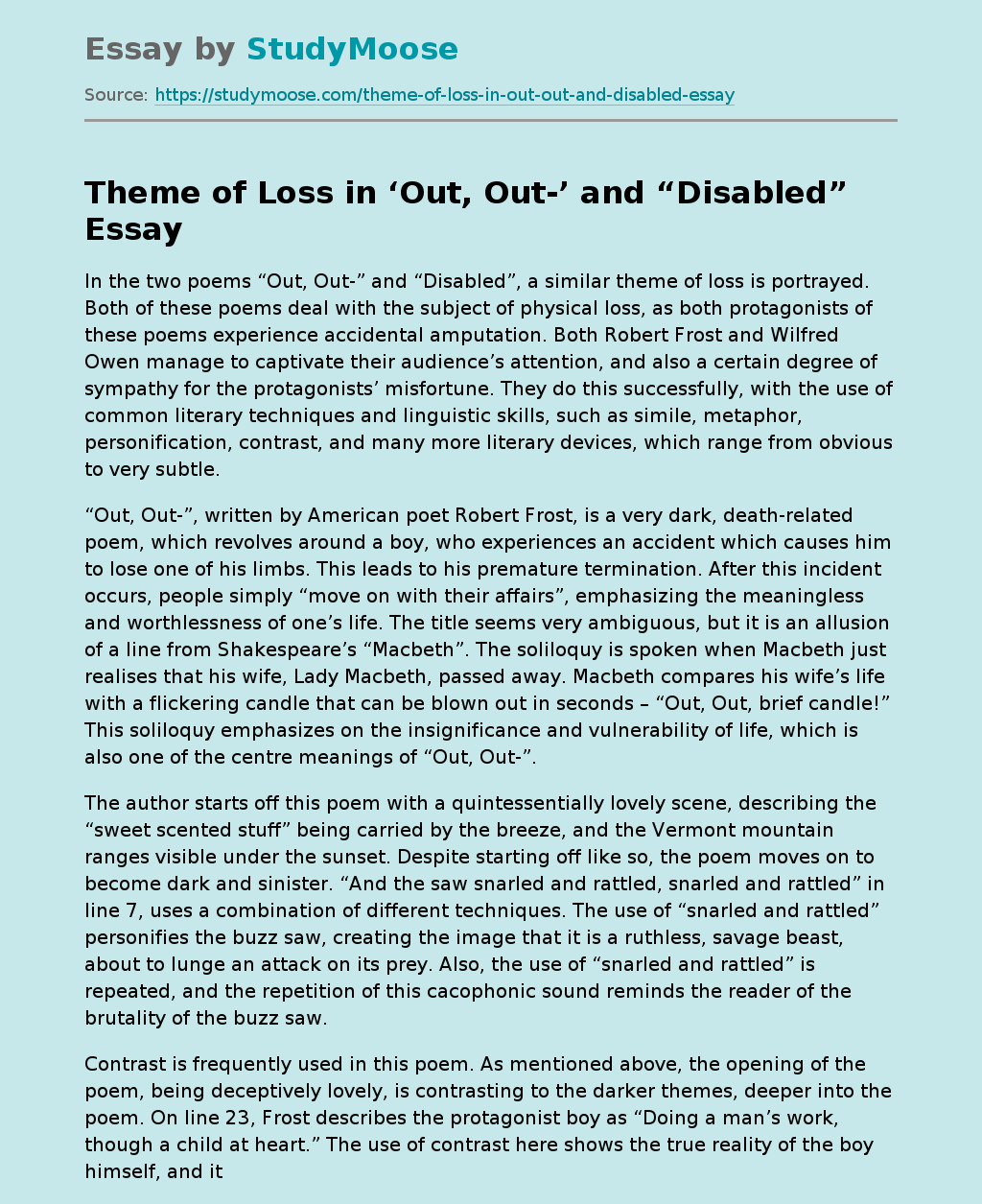