The witches present modern directors with great difficulties. Consider the role of the witches and suggest how they can be made as successful for a modern audience as they would have been for a contemporary audience.

In Shakespeare’s day, the thought of the witches scared people as they thought that they had witches living among them, casting spells on them and trying to do them harm. This fear was fuelled by the King at the time, James I, who believed strongly in the Divine right of Kings.

Don't use plagiarized sources. Get your custom essay on
“ Macbeth Coursework ”
Get custom paper
NEW! smart matching with writer

This meant that he thought he derived his authority from God and so could not be held responsible for his actions by any authorities on earth. He felt that if he was God’s representative on earth, then Satan must also have one. He wrote a book on demonology, which talked about witches powers and origins.

Due to this, it would have been very easy to make the witches seem frightening to an audience of that time.

Nowadays however, people do not believe in witches and are not as superstitious. This makes it much more difficult for a director to make them as frightening as Shakespeare intended them to be.

Shakespeare managed to make the witches seem evil by using a variety of techniques. One way was by giving the witches scary looking costumes. This could be achieved by wearing dark, worn out clothes and having dirty matted hair. Make-up could be worn to make them ugly and give them warts and blemishes on the face to make them seem unclean and unhealthy.

Banquo says that they:

This would have made the audience think of them as demon like creatures as they were ‘not of the earth’. This description would have scared them even further.

The witches were also made scary by making them cast spells on people and make potions. We see this when they cast a spell on the sailor and also when they make a potion at the beginning of the play.

Fillet of a fenny snake,

In the cauldron boil and bake.”

This potion uses many unusual ingredients, including ‘scale of dragon’. This shows that the witches are able to get ingredients that no normal human could. This also shows that the witches are in touch with mystical creatures that people of this time may have been scared of, making seem even more frightening. Another ingredient in the potion is ‘witches’ mummy, maw and gulf’ which is the stomach and throat of a mummified witch. This is a very disturbing image of them using their mummified to dead to make potions with.

Another method Shakespeare used to scare the audience was pathetic fallacy. This is the use of the weather to convey the mood of a scene. An example of this is in the opening line when the witch says:

“When shall we three meet again?

In thunder lightning or in rain?”

This implies that any time they meet there is natural disorder, possibly caused by their presence, which makes them seem like a dark force.

Shakespeare made the witches speech seem confusing by using oxymorons and language which is difficult to understand.

When the battle’s lost, and won.”

This would confuse people, as it does not make much sense. This would make the witches seem more frightening as people are sometimes frightened of things that they don’t understand.

Shakespeare also used language to make the witches seem frightening. When the witches speak, they do not speak like woman were supposed to at the time. Instead they used swear words and were very rude and cruel to people. An example of this is when they are talking to the sailor’s wife in Act 1 scene 3. The first witch says:

“A sailors wife had chestnuts in her lap

This would have made them frightening, as people would not be used to this behaviour from a woman and it was not generally socially acceptable.

The fact that the witches played a main part in killing Duncan would have scared the audience as the King was the most important member of society and if they had the ability to trick Macbeth into killing him then they would be capable of doing other evil deeds, possibly even worse than killing the King.

When the witches made the 3 apparitions it would have scared the audience greatly as this was a very supernatural event to occur. They would have been even more frightened when the apparitions turned out to be true at the end of the play as this meant that the witches had real powers and could really tell the future. It was these apparitions that made Macbeth feel invincible as he thought they would never happen, as it seemed impossible that a forest could move. He was not afraid of Macduff or the army as the apparition said

‘none of woman born

At the end of the play, it turns out that Macduff had been born by a caesarean section and not by a natural method which means he can harm Macbeth. The audience would then see how cunning and smart the witches had been which would have made them even more terrifying as they could easily outsmart people and manipulate them into making them do what they want.

While all these things would have made the play frightening for a Jacobean audience, most of it would not be frightening for an audience today. Due to this, a modern day Shakespeare director would find it very difficult to make the witches seem scary which is a very important part of the play as they are some of the main characters in it.

There are many things a modern director could use to make them seem scary. The director must think of what scares people nowadays and incorporate it into the witches’ characters.

One way to make the witches seem scary today would be to make them part of a cult, as this a one thing that really happens today, and which still frightens people. This ties in to the witches theme as they try to brainwash Macbeth, which is the kind of thing a cult would try to do today.

Another method a modern day director could use is to make the witches part of society and have jobs where they can get close to people and their families, such as a doctor or a midwife. This would make it more frightening as they could get close to people and still remain trusted. This is the kind of thing that still scares people today due to articles on the news about paedophiles and murderers who get close to their victims first.

Another method which could be used is to make their environment cold and desolate. Rooms they are in could have dead plants, no windows and dark damp walls. This would give the impression that they bring death and darkness with them wherever they go, making them seem more evil and sinister to the audience.

They could also act cruelly to each other. This would make them seem more evil as they are even cruel to people who they are ‘friends’ with making them seem like they do not care for anyone other than themselves and are incapable of love or proper interaction with others.

In conclusion, a modern director would have a harder job making the audience scared of the witches. They would have to use more psychological methods to scare them and adapt the witches’ characters so that they are more relevant to modern society. 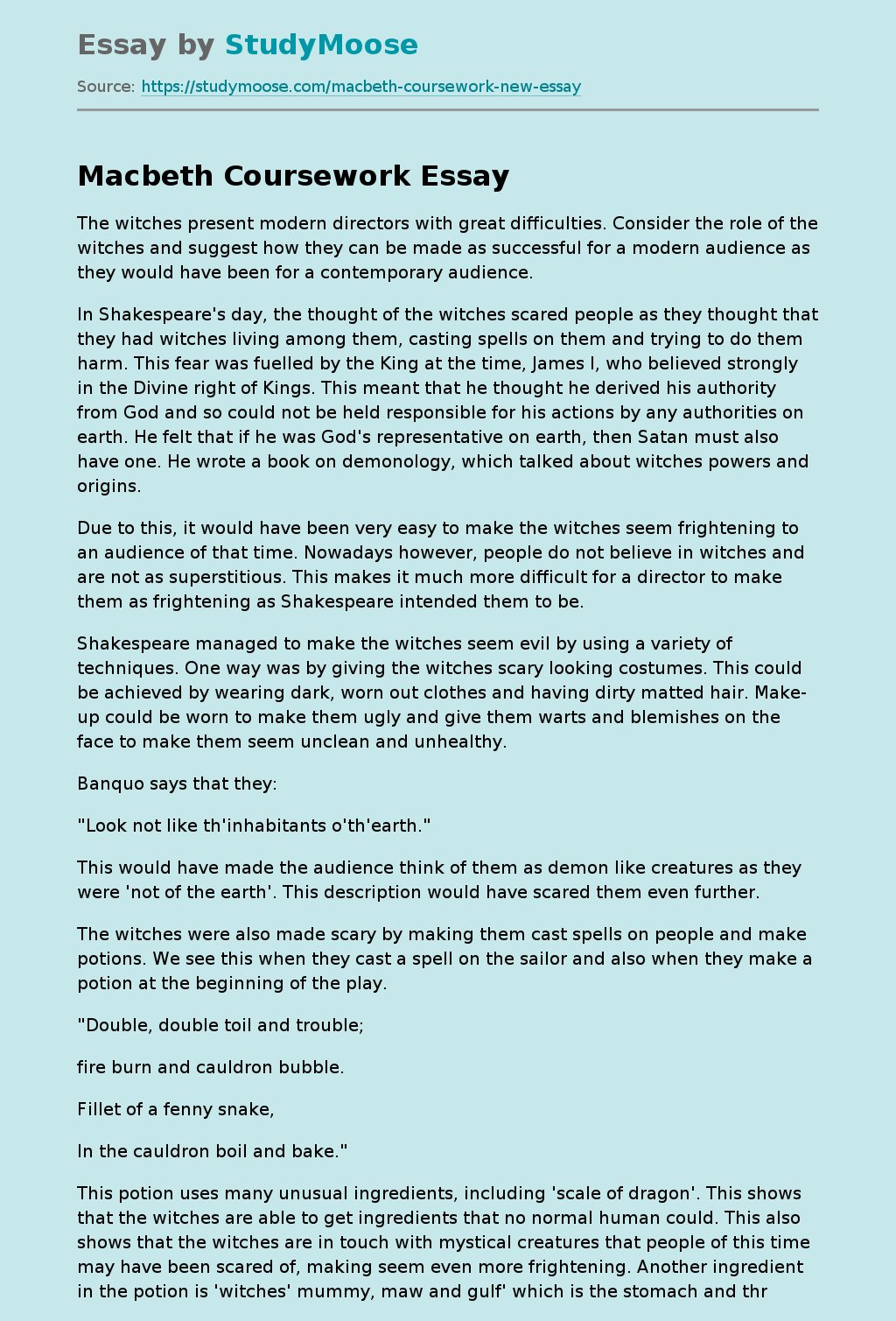