Othello is one of Shakespeare’s tragedies but also a love story of two lovers. Shakespeare’s tragic heroes always had at least one main flaw, which contributed to their downfall. In Othello’s case it was jealousy; when he was told Desdemona was having an affair. Other themes the play deals with includes hatred, racism, betrayal and discrimination. Although Othello is the main protagonist in the play, however, in many ways Iago seems to be the dominant character. Iago is presented in complete contrast to Othello, and is the villain of the play.

Don't use plagiarized sources. Get your custom essay on
“ Othello Coursework ”
Get custom paper
NEW! smart matching with writer

Othello is a respected high-ranking general whereas Iago is a lower status and referred to as in his ‘ancient’ or his ‘ensign’. Many critics often describe Iago as the narrator of ‘Othello’; a fascinating character who is the main focus of the play. Many critics also see Iago as an intriguing character as he can be unpredictable. At the beginning of the play, it is Iago and Roderigo who are the first on stage, not Othello.

If one were to form an opinion of Othello from this discussion, it would not be a favourable one.

The audience is made aware of Iago’s hatred of Othello because Othello promoted Cassio instead of him and his belief that Othello slept with his wife. Furthermore Roderigo is jealous of the fact that Othello has taken Desdemona as his wife. In Act 2 Scene 3 of Othello, Iago is presented as the puppeteer, constantly manipulating everyone around him. Critics have argued about Iago’s motives for wanting to hurt others but in this scene he comes across as cruel and malicious.

The scene is set in a castle and opens with Iago trying to get Cassio drunk.

Iago motivated by his lust for power is attempting to dispose Cassio of his position as a lieutenant. Knowing that Cassio cannot handle his liquor it would be more likely he would fight if he’s drunk and that would make him look bad in Othello’s eyes. The opening scene presents us with a brief exchange of Cassio and Iago controversial analysis on Desdemona. In the dialogue, Cassio remarks are polite and complimentary to Desdemona stating she is ‘exquisite lady’, ‘fresh’, ‘delicate creature’, ‘modest’ and ‘perfection’. Iago on the other hand has a contrasting view compared to Cassio.

Iago suggests that Desdemona is ‘full of game’ and ‘sport’ and that there is ‘provocation’ in her eye suggests both characters have different views on women. Iago’s low opinion of Desdemona only deepens his misogynist view and his hate for women because of the control Desdemona has over Othello. This can portrays his jealousy because Desdemona is an extremely attractive character with a higher noble status than his wife, giving him a reason to hate Othello. Iago has the opportunity to consider his plans in his soliloquy when Cassio leaves to invite some friends for a drink.

One way we can tell the presentation of Iago as a character in Act 2 Scene 3 is through his soliloquies. It reveals Iago’s true character and intention to get Cassio drunk so that he loses control and becomes quarrelsome to get into a fight with Roderigo, ‘Am I to put our Cassio in some action’. His skills of persuasions show his power to manipulate people into trusting him to cover his act of being an ‘honest’ friend that adds to the presentation of his character. Iago’s clever perspective to observer this from a person allows the audience insight into various schemes or secrets to his motives that other characters are blind to.

Furthermore, Iago’s understanding and manipulating the weakness of those around him make him a powerful and compelling figure that Shakespeare have portray in this scene. Cassio who has been left in a position of responsibility by Othello will shame himself as a lieutenant and loose his position as part of Iago’s plan that will gain him power for his talent of understanding and manipulating people’s weaknesses, ‘If consequences do but approve my dream’. Iago states he is willing to take on revenge on anyone that gets in his way of achieving Othello’s downfall.

The end result would make up for what he lost on his way and enjoys the pain and damage he causes which he ‘approves’. The first soliloquy in this act shows us how narrow-minded Iago is and lacks emotions or feelings towards the people around him or himself. W. H Auden describes Iago as a “Practical joker of a peculiar appalling kind. ” W. H attempts to portray Iago as a more humane character than he really is. Loyalty, love, friendship and guilt are all emotions that make us human. Iago misunderstands this concept of feelings, which leads him to his downfall.

Shakespeare presents Iago with loss of emotional connections in his character show the tragedy of how isolated Iago is. Shortly after Roderigo raises the alarm under Iago’s instructions, Shakespeare uses dramatic irony to present Iago’s actions as he pretends to be the peacemaker. Othello aroused from his sleep ask ‘honest Iago’ for an explanation of the disturbance. Without being disloyal to Othello or to Cassio, he ironically follows Montano’s advice upon his honour as a solider to tell the truth of his version of the night’s events.

While trying to save Cassio by making excuses for him, Iago endures that Othello will have no other option than to remove him as his position for causing a shameful public display. The irony of Iago’s account, we known that Iago constantly tries to underplay Cassio’s part in the fight, ‘I had rather ha’ this tongue cut from my mouth, Than it should do offence to Michael Cassio. ’ With subtle additions such as, ‘And Cassio high in oaths, which till tonight / I ne’er might see before’ and ‘ but men are men, the best sometimes forget’ reveals that Cassio has disgraced himself to befit a high ranking officer.

Cassio sacked from his lieutenant position, Iago pretends to be a true friend by advising Cassio to seek help from Desdemona to gain his position back. ‘This broken joint between you and her husband entreat her to splinter’. Shakespeare cleverly portrays Iago as an evil mastermind who appears to aid Cassio, instead manipulating the situation in order to make it appear to Othello that Desdemona has emotions for Cassio when she pleads for his job. This sequence allows us to see Iago’s manipulative nature in a continuous flow; from the way he has made others see him to the revelation of his true self.

The way he’s portrayed, we are amazed by his mastery of switching facades or identities without a trace of guilt. Iago when speaking with Montano, questions Cassio integrity and his position as a Lieutenant. Iago manages to suggest his support and concern for his comrade while at the same time, destroying his credibility and honour. He mentions to Montano that Cassio is a ‘solider fit to stand by Caesar’ as 2nd in command but his drinking habits matches his ‘virtue’ and implies he drinks every night.

Iago’s apparent concerns furthers as he criticises Othello’s judgement for trusting Cassio to be his lieutenant shows his jealousy to be overshadowed and therefore lost his ‘social class’’ that he lacks of. His hatred dominates him just like he dominates all the other characters. Iago seems to master all the emotions that might affect his facade and never shows a trace of nervousness that intensify the power he has over the characters in the play and his ability to control the situation to his will.

Furthermore when Iago protests to Montano that he is reluctant to highlight Cassio’s problems to Othello, as he ‘loves’ Cassio and would not wish him any harm. The irony of this situation is the fact that once Montano suggest it would be an ‘honest action’ to inform Othello, Iago declines. This is the only time we see Iago is speechless and to make him look more trustworthy, he implies that his allegiance is to a higher kind of ‘honesty’. 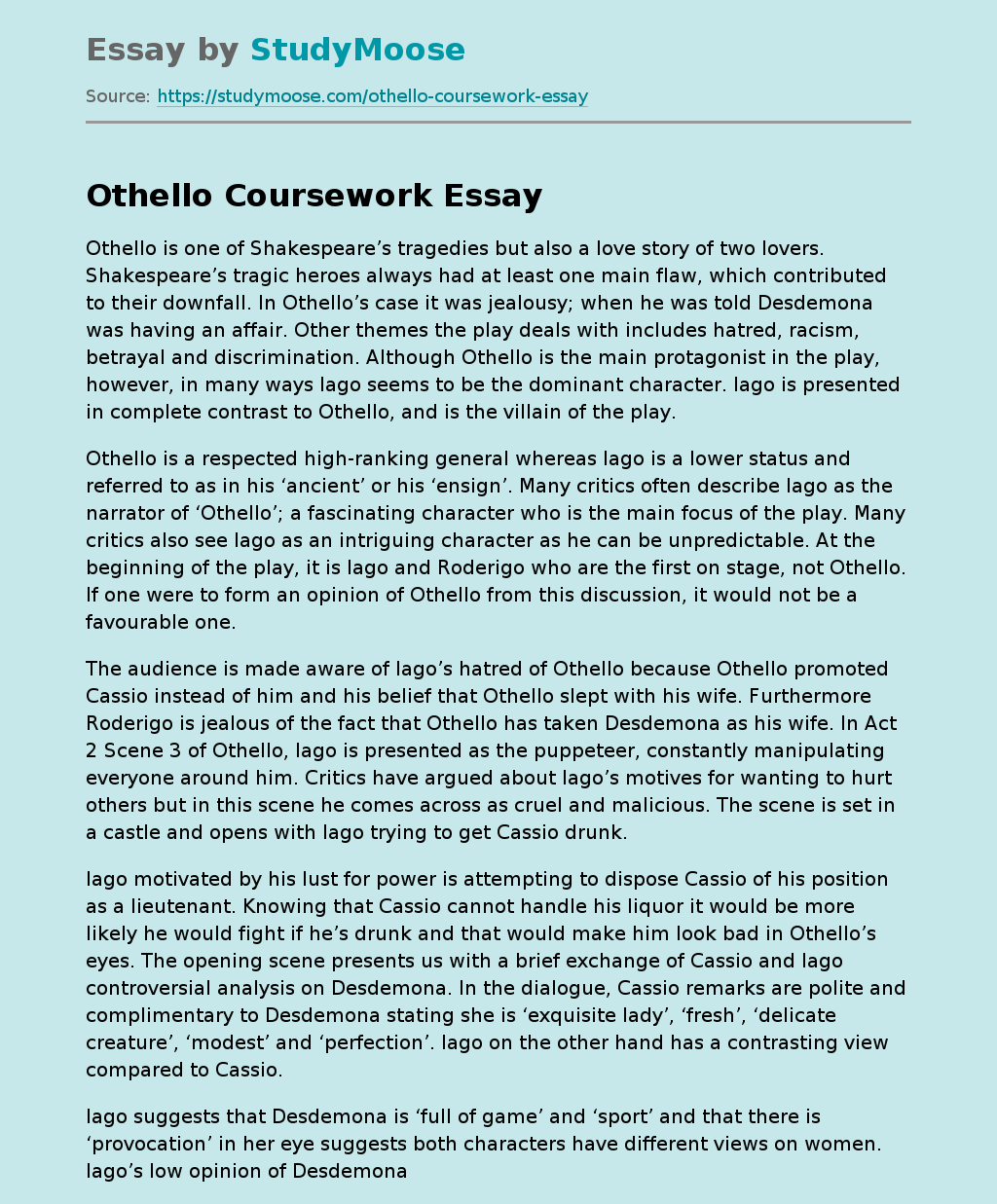