Disabled by Wilfred Owen and "Still I Rise" by Maya Angelou

The poem “Disabled” tells the story of an unnamed ex-soldier who has lost his limbs during the War. This affects his life and leads him to reveal the reality and horrors that he has experienced. This poem has an omniscient narrator. However, “Still I rise” is about a person’s inner strength to challenge oppressors.

Don't use plagiarized sources. Get your custom essay on
“ Disabled by Wilfred Owen and “Still I Rise” by Maya Angelou ”
Get custom paper
NEW! smart matching with writer

The narrator shows the importance of a determined spirit, as it addresses those who sought to control her. The themes are black slavery and civil rights.

The characteristics of the narrative voices are different. In “Still I rise” the speaker’s voice is confident and empowering, making references to ancestors that give her supportive strength and determination to fight. The speaker wants the reader to feel responsible for the sufferings of her ancestors and uses a confrontational tone addressing the reader as ‘you’.

In stanza six, verbs of violence and aggression, such as ‘shoot’, ‘cut’ and ‘kill’ emphasise a forceful tone, as the poem rises to its climax: “You may kill me with your hatefulness, but still, like air, I’ll rise”. This suggests a metaphorical death, as oppressors’ hatefulness could bring her determined spirit down and stop her from expressing her rage about the past treatment of black people. The simile implies that she will always find a way to get up. The comparison with air is effective as it cannot be killed, shot or controlled.

It is written in second person to draw your attention to her phrasing of self-worth. The use of short sentences of the repeated refrain, “I’ll rise” creates a powerful and self-assured image as she is proving undefeated.

By contrast, “Disabled” is depressing and sad, suggesting the reality of war and the price the soldier had to pay for losing his limbs. He feels he is a lesser and incomplete man, isolated mentally and physically making him unresponsive to the enjoyment of life. The speaker shows this by mentioning his youth, but now being old, the war has changed the soldier’s attitude and appearance. He sat in a wheeled chair, waiting for dark, shivered in his ghastly suit of grey, legless, sewn short at elbow. This indicates a lost identity and a reliance on others. The dark colours reflect the negativity and help to create a depressive mood. They also symbolise the soldier’s feelings of death and hopelessness. Alliteration in ‘ghastly’ and ‘grey’, emphasising the feeling of dullness. The metaphor, “Sewn short” suggests a shortened life because he has been cheated by the army. At the end of the phrase the caesura allows the reader to focus and pause the rhythm, creating a dramatic effect.

The language used by Maya Angelou is colloquial, as it expresses her love and devotion to her ancestors. The speaker has a hopeful tone reflecting her ability to be unassailable. The speaker is the spirit of the descendants of slaves, addressing the white oppressors who have discriminated against her ancestors. “Does my haughtiness offend you? Don’t you take it awful hard” cause I laugh like I’ve got gold mines diggin in my own backyard. This indicates that her haughty attitude and confidence has grown despite the problems. The rhetorical sentence, “Does my haughtiness offend you?” creates tension and urgency, to challenge the reader by generating a powerful resilient voice. “Awful hard”, highlights the sense of amusement and lack of confidence her persecutors feel when they are challenged. The simile creates impact, as the speaker laughs with the confidence of someone wealthy because she possesses limitless gold as symbolic spirit and hope.

The language used by Wilfred Owen is formal because it expresses the desolation of the character who has lost everything. The speaker creates a sorrowful tone by using sombre diction when describing his present life contrasting with the joyful moments of his past. The iambic pentameter symbolises the order and rules of the army. This makes the character feel constricted due to the remembrance of his lost limbs. “Why don’t they come and put him into bed? Why don’t they come?”, this suggests that the character feels helpless like a child. He wants to be put into bed, which is a simple act. It could also mean he is wanting to be in a grave, as he is dying. The metaphor indicates it is cold and late, which means death in near and the repetition portrays the feelings of despair. Short sentences create the sense that he has a short time in his life. Rhetorical questions give the effect the speaker is talking about the future; he will live in a caring institute but always be dependent.

In “Still I rise”, the speaker is overcoming discrimination and injustice to abuse because she has a hopeful prospect. At the start of the poem she explains to us that without her ancestors, she would not have a future. This is because although she is not a slave, she still experiences racial maltreatment but overcomes this by showing resilience in her tone to not become a victim. Whereas in “Disabled”, the character had a promising future but was persuaded into a life that would give him a future dependent on others. He is now trapped with a haunting mistake, made from an immature stage in his past.

The reason I have chosen “Still I rise” and “Disabled” is because they differ dramatically in their ideas and themes. In “Still I rise” the character is victorious and has pride in her confidence due to her determined spirit. Her attitude is forceful and persuasive when conquering her dreams and oppressors’ challenges. She demonstrates her power of love when it come to her ancestors. Bringing the gifts that my ancestors gave, I am the dream and hope of the slave. The speaker turns her future into a positive outlook because it is a new beginning. Her Ancestors have given her a chance in life because they have been protesting about how they should have the same rights as white oppressors. She is now carrying on their belief for a better world.

In “Disabled” the character has a drastic change is his life which cause him to lose his limbs. This poem appealed to me because it stood out by the insight on the characters. The soldier has regretted his life decisions and the remembrance of them returns in gestures from his past. It describes the after-effect of the war and does not shy away from the reality. The war was a horrendous time and I was interested in learning a new perspective. The speaker emphasises how the soldier was careless in his actions and he never understood the importance of his limbs were until they were gone. In the old times, before he threw away his knees.

I decided to compare these poems because in “Still I rise”, the speaker is victorious and wants to strive to have a fair future. Her ancestors have been treated unfairly in the past and she wants oppressors to realise that this was inhumane to sell and chain up humans, whereas in “Disabled”, the speaker has given up on his hopes and dreams. He connects with the reader by showing the loss and lack of hope he has because of the merciless war.

Disabled by Wilfred Owen and "Still I Rise" by Maya Angelou. (2019, Dec 05). Retrieved from http://studymoose.com/explore-the-way-the-writer-uses-language-and-structure-to-example-essay 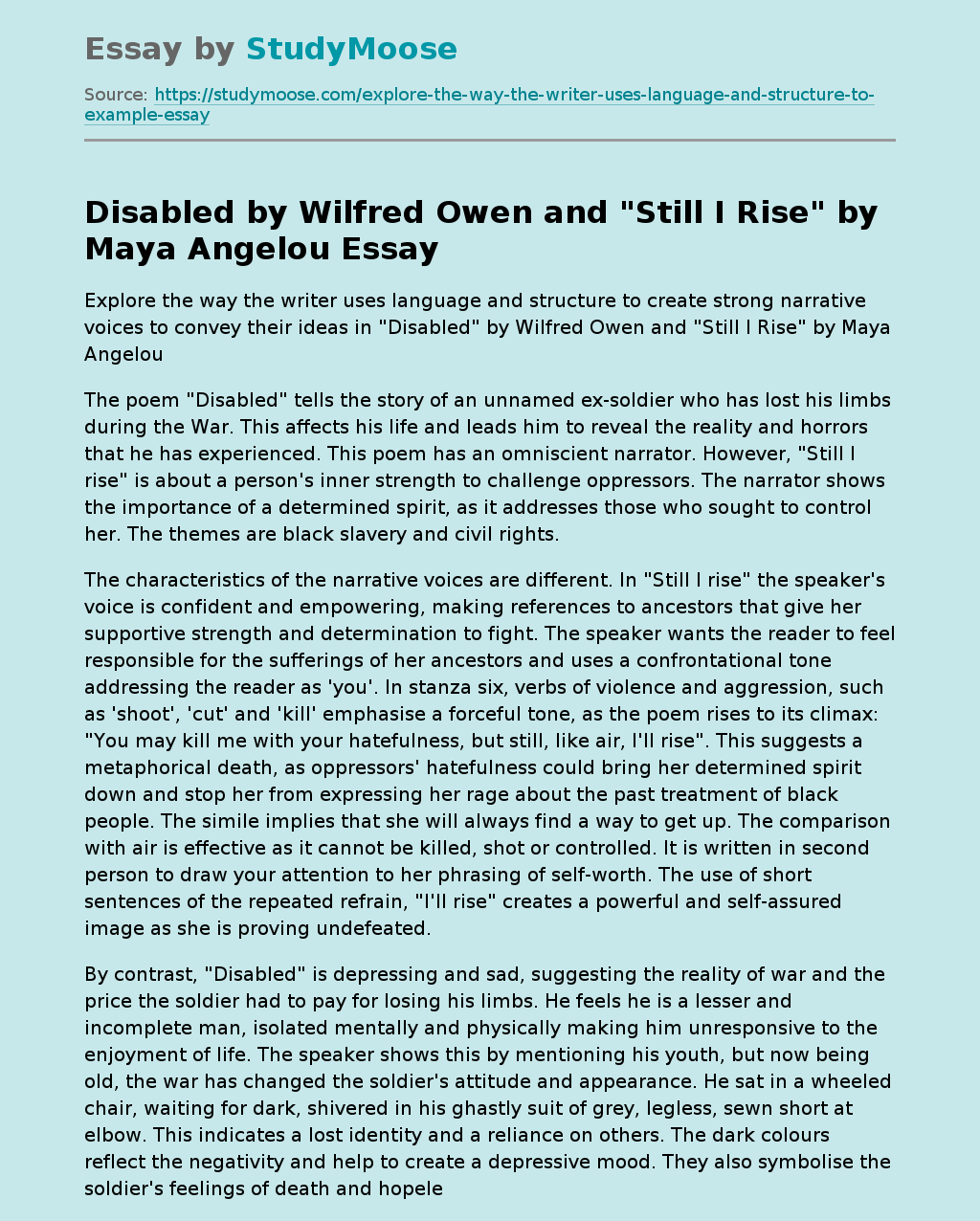