‘Disabled’ and ‘Dulce et Decorum Est’ are war poems by the poet Wilfred Owen. Imagery and vocabulary in both of these poems are significant in representing mood, atmosphere and purpose. By using metaphors, similies and other forms of creating imagery, the poems are made accordingly emotive, and easier to comprehend as they enhance the readers interpretations by drawing on the readers senses.

By analysing the poems we can see the evidence for this, and by imaging alternatives to particular phrases and words, we can see how the effect and meaning would be altered or at least lessened.

Don't use plagiarized sources. Get your custom essay on
“ ‘Disabled’ and ‘Dulce et Decorum est’ by Wilfred Owen ”
Get custom paper
NEW! smart matching with writer

‘Dulce et Decorum Est’ has high amounts of imagery and language in it, and it is a poem to shock to the shock the reader into a state of pity rather than a poem that demands pity.

The first stanza begins with a metaphor and similie, which give an appalling portrait of men in a wretched condition, far from the youth and beauty that they should have.

It immediately sets the scene in an atmosphere of shocking conditions. By comparing them with ‘old beggars under sacks’ we not only realise that the soldiers are fatigued and dishevelled, but also that they have suffered an experience that steals their age from them, and is severe enough to last them a lifetime of hardship both physically, as they are injured, and mentally.

Merely by reading the first two lives, we are presented with an aged, decrepit, dark and coarse image, which continues with language such as ‘haunting’ and ‘trudge’ which particularly emphasise darkness, and a slow dragging tone.

The use of ‘blood-shod’ helps you to imagine men dragging their bleeding feet through the wet mud. It is a dehumanising image, both physically and mentally. The hyperbole that comes next, ‘all went lame’ added to repetition of ‘all’ greatly expands the readers understanding that the whole army was united in this suffering, and that everyone was injured in some way or form. Considering that all are ‘lame’ and ‘blind’ it makes one wonder whether the poet is asking whether living was relevant at this point.

Owen focuses on suffering rather than death because the visualisation of living torment has a stronger effect on the mind.

The reader imagines staggering, overexhausted men, so tired that all their senses are consumed, and this effect is achieved by the play of words in ‘drunk with fatigue’, it is the ‘drunk’ part that creates this image. Again Owen uses this play of words when he says ‘deaf even to the hoots of gas shells’, and this choice of words brings a more thought invoking edge to the poem than the event would have if explained directly.

The juxtaposition of ideas that comes next slows the tempo down, and creates a silence that makes events sharper and more brutal. As a result ‘gas shells dropping softly’ shows prolonged, inescapable agony, and heightens the readers appreciation. The irony found here increases the power that the poem possesses.

In the second stanza, the death of a fellow soldier is portrayed. The temps is rapidly picked up from the last stanza by the punctuation used in the first line, ‘Gas! Gas! Quick, boys!’. This increase in speed pulls the reader into the urgency and hopelessness of the situation. This is taken further by ‘ecstasy of fumbling’. Medically, ecstasy means a morbid state of nerves in which the mind is solely occupied with one idea. However, generally, it is used as a euphoric term, and so the contrast of this word brings the action to life.

In this stanza, the readers sense of smell is played upon by the use of gas and the increase of colour intensifies the action, making it more bold, vivid, and chaotic.

The reference to dreams

His reference to dreams suggest that he is out of control, and adds to the feeling of helplessness that is being portrayed, and can also serve as an indirect way of describing a flashback. When he says ‘plunge’ we are presented with an image and sound that are associated with what he is trying to revise: drowning, a moving up and down into the water with force. The third stanza is only two lines long, and the words used sound like their meaning: ‘guttering, choking, drowning’. This stanza tells us about the aftermath in the light of a recurring nightmare of terrible images that are unlikely to be forgotten.

The fourth and final stanza is written in a way that you can interpret the poet’s feelings to be those of anger and frustration by his addressing the reader. It is an attack on the people who send men and boys to war, and those at home who believe or teach others that war is glorious and noble. This stanza directly approaches the subject with words such as ‘smothering’, ‘white eyes’, ‘writhing’, ‘devil’, ‘sin’, ‘gargling’, ‘froth-corrupted’, ‘bitter’, ‘vile’ and ‘incurable’. These comprise the poets concluding atmosphere, and give a harsh and effective tone. Without words such as these, the extent at which the poem shocks would not be as great. The revolting surroundings and story would come across differently, and the poem would be expressed and interpreted differently.

Therefore, after placing concentration on the imagery and language, we can see that this poem, without the vocabulary and references that is has, would not quite be the same, and therefore the significance of vocabulary and imagery is great, and plays a large part in the poem’s level of influence and power.

Disabled is about a poignant young soldier’s story, comparing his life to what he had before, to what he is left with now. It has a vivid opening; he sits in a ‘wheeled chair, waiting for dark’. By not saying wheelchair, Owen makes the situation of the young man seem more hopeless, and the darkness represents his waiting for death.

The application of the colour grey, and the alliteration in ‘ghastly suit of grey’ send off a shadowy, bland stream of gloom through the stanza, and we learn that he has no limbs directly after, combining a sorrowful event with a repulsive colour.

Then in contrast, we hear ‘voices of play and pleasure’, but instead of these enlightening the mood, they add to the gloom, because the young soldier will never be able to engage in such joy ever again, and it merely heightens his isolation.

The gaiety of his past memories

The next stanzas are him reminiscing, and the gaiety of his past memories are expressed by words such as ‘swing’, ‘gay’, ‘budded’ and ‘glow lamps’. He ends both stanzas by bringing himself back to reality: he is seen and touched like a ‘queer disease’. Queer disease implies something that repels people, and is associated with death, when really it cannot be helped and is through no fault of the victim. Therefore, this phrase criticises society’s lack of compassion, and is representative of rejection.

We learn that once he was handsome from ‘there was an artist silly for his face’, but then it says his ‘back will never brace’, meaning that he is old, withered and has lost his youth and beauty. He refers to his bleeding as a ‘leap of purple’ rather than red because by not using the common colour, he is emphasising the action by playing it down, making the reader interpret it to a higher extent while at the same time getting the same meaning across. It gives a bleaker, more horrid and gory image. Purple is also a colour associated with reagleness, and Owen plays on this.

In the fourth stanza he mentions a ‘blood smear’ and this has a life enhancing effect opposed to when he has ‘lost his colour’ and ‘veins ran dry’, which is life draining. When he speaks of ‘jewelled hilts’ and all that he admires such as the uniform, we learn that he is vain and self esteem is important to him, and so our knowledge of this enhances our pity for him when he speaks of how he has lost all that he took for granted. The repetition of the word ‘fear’ later makes the line stretch out and linger in the readers mind.

In the fifth stanza we are informed that ‘only a solemn man’ acknowledged him, and this tells us that he is bitter about no one person thanking him for his service, and the fact that the man who ‘thanked him’ said it almost in gest, and out of an attempt at politeness rather than truly meaning it.

The last stanza has no imagery and is a plain summary of the young mans future, and ends with him questioning when he will be taken away from the pain of viewing all that he craves and can no longer be a part of.

Disabled has less imagery than ‘Dulce et Decorum Est’ but the language used in it is significant in giving it its bitter, sorrowful and empty eminence.

To conclude, the words used in both poems all give a certain characteristic to the poems, and so it is important to choose words that are properly representative, which is why it is so significant. The imagery too makes up a large part of the poems efficiency and purpose. The most evident examples are use of colour to create the mood, and imagining the poem without such aspects as colour and symbolism, the poem becomes harder to relate to. Consequently I personally find that the choice of vocabulary and the use of imagery is highly significant in the poems ‘Dulce et Decorum Est’ and ‘Disabled’. 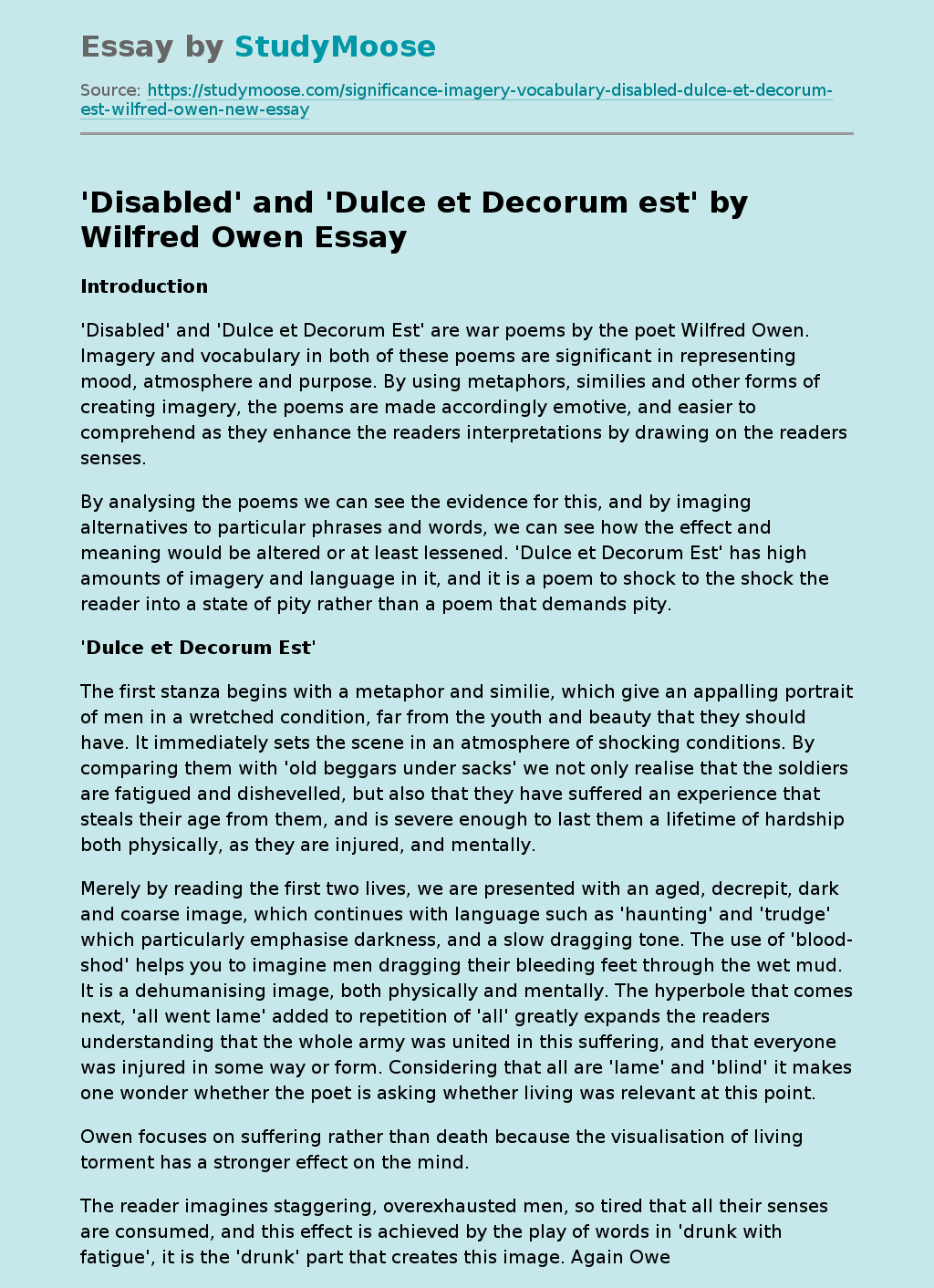