I believe that the First World War is an important time and topic for poetry. It includes some of the most famous poems in history. I will focus on the poem ‘Dulce et Decorum est’ by Wilfred Owen and explain this poets unique perception of war. However, I will also annotate a poem by Rupert Brooke called ‘The Soldier’ and review the similarities and differences between the two pieces of poetry. I will mainly explain what the poems are trying to give, in an image, to the reader.

Turn in your highest-quality paper
Get a qualified writer to help you with
“ ‘Dulce Et Decorum Est’ and ‘The Soldier’ Comparison ”
Get high-quality paper
NEW! AI matching with writer

The two poems differ in form. I think Wilfred Owen decides to use his form as a symbol of being against tradition therefore Owen’s form is non-traditional. This point signifies that he does not think of war as a good thing to be a participant of. I believe that Owen’s attitude to war, that he presents in the form, is rebellious and chaotic. On the other hand, the poem by Rupert Brooke portrays the neat and simple form, withholding the ability of discussing the detail of combat.

I understand this is because Brooke did not experience war, whereas Owen wrote his poem after he experienced it himself. This implies that the effect of war affects the form of a poem.

Owen conveys his personal views on conflict through his use of irregular and untidy structure and amount of movement within the poem.

The fact that Owen has varied his paragraph lengths suggests that that there is so much information and mental images that they do not fit properly in the poem. In the third stanza there are only two lines. That gives me, the reader, a feeling of focus on the moment Owen is describing. It zooms in the importance of the stanza. The whole structure of the poems shows Owen’s feelings of confusion to war.

The poem by Owen contrasts with Brooke’s poem as Brooke conforms to a short sonnet persuading the reader that war is full of honour. Because Brooke’s poem is about war, I think it is quite unusual to structure the text as a sonnet (love poem.) I don’t think Brooke was trying to vary the topic of the paragraphs. Brooke, similar to Owen, shows his personal views of war throughout the text. However, the movements of his subjects are not produced. I think that the structure of Brooke’s poem is lifeless and dull, compared to Owen’s astonishing and unusual structure.

I feel that both of the poems have a title that barely links with the lines in the poem. Firstly, I think that Wilfred Owen’s title, which translates to ‘It is Sweet and Right,’ does not agree with rest of the poem as the poem explains how it is not sweet and right to die for your country. I think that Owen purposely did this to confuse the reader, as he wants to demonstrate that war confuses him. I understand that this point is presenting that Owen has used a symbolic title. Similarly, Rupert Brooke uses a title that doesn’t necessarily relate to the lines of the poem. However, Brooke’s use of an unrelated title is different to Owen’s use. Brooke talks about the how war gives honour and courage, whereas the title is ‘The Soldier,’ which you would think would make the poem about a soldier. On the other hand, Brooke could be situating the title to war by describing what a soldier would go through and what it would me to them. 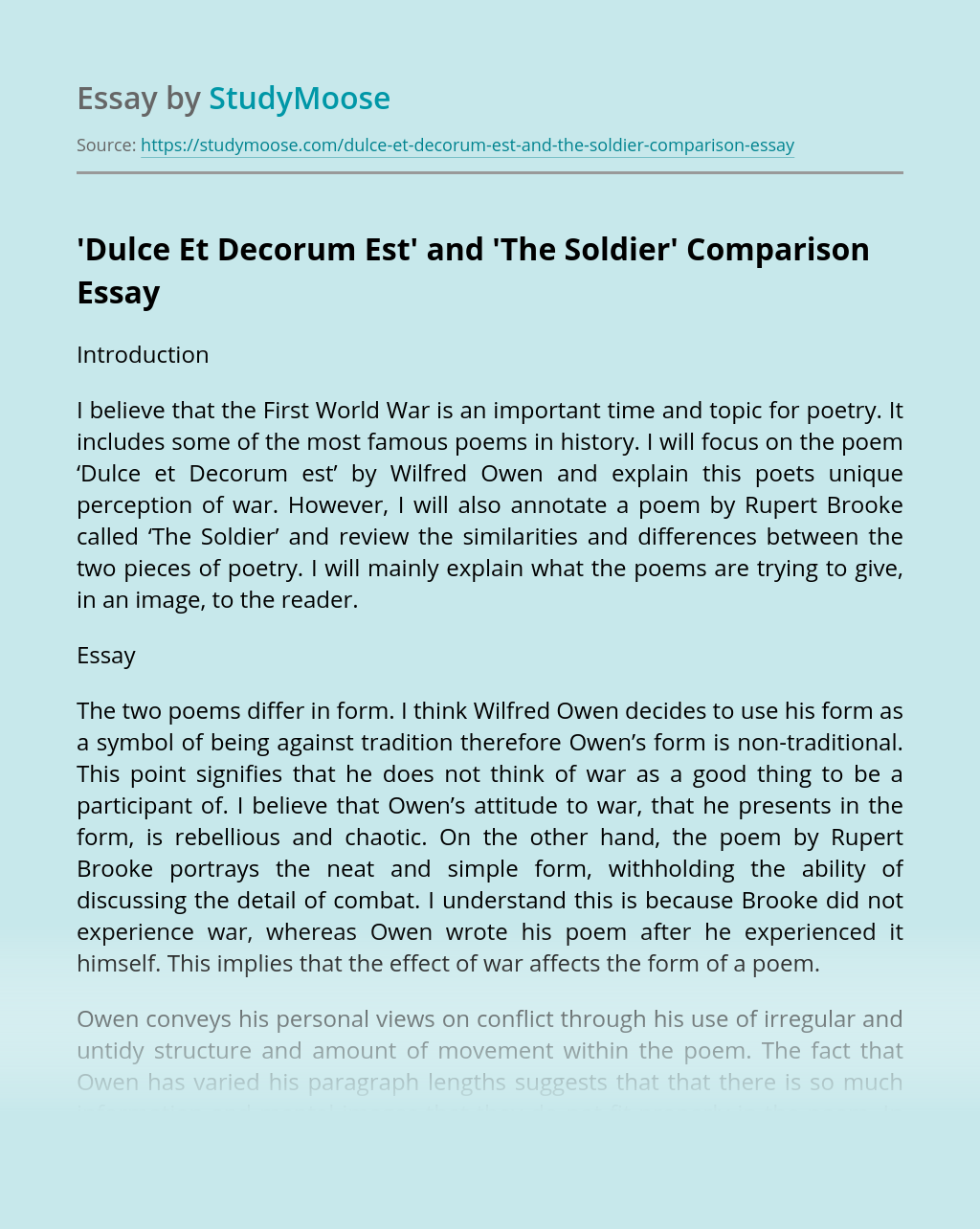 Turn in your highest-quality paper
Get a qualified writer to help you with
“ ‘Dulce Et Decorum Est’ and ‘The Soldier’ Comparison ”
Get high-quality paper
Helping students since 2015
Stay Safe, Stay Original