Wilfred Owen and Rupert Brooke both share the similar themes within their poems, which are war and death. Although there is unconformity within their views due to their backgrounds and experiences. Brooke was very idealistic, which makes sense when he never actually got to fight in the war as he died shortly before where as Owen went through the genuine experience. Two poems that highlight these two contrasts are ‘The Solider’ and ‘Dulce et Decorum est’.

In ‘The Solider’, Rupert Brooke illustrates how a soldier is reflecting on the possible death going away to war may bring.

Don't use plagiarized sources. Get your custom essay on
“ Compare and contrasts of ‘The Soldier’ by Rupert Brooke and ‘Dulce et Decorum est’ Wilfred Owen ”
Get custom paper
NEW! smart matching with writer

Both poets desire different forms to present their poems. ‘The Solider’ is a sonnet which suits Brookes type of poems as he romantises the theme of war ‘The Solider’ is very much as well a love poem to his idealized England. Where as Owen opts for the more simple 8. 8. 11, Owen doesn’t seem to have a solid form as Brookes does. They both share the rhyming pattern of ABABCDCD which allow their poems to flow and create rhythm.

The structure ‘Dulce et Decorum est’ can be broken down into three parts, an outsiders description and recollection of events featuring soldiers withdrawing from the frontline, a man within the battle himself, and a addressing to the reader of confrontation to those who share the idealistic view of war.

Owens poem creates a build up towards his main point in which he finishes off with ‘The Old lie; Dulce et Decorum est Pro Patria mori’. From Owens experiences ‘Dulce et Decorum est’ acts as a warning and a hit of realism to those who are at home.

‘The Solider’ is a much more relaxed peaceful sonnet. Brookes use of natural imagery creates a more calm aspect of war. ‘Dulce et Decorum est’ features intense imagery as the key of Owens poem is to get across a point of the horrendousness of war. Within ‘The Solider’ Brooke recalls the memoirs of a fallen solider whom declares his patiotism to England by declaring that his death shall be the eternal ownership of England, of a small portion of land he has died upon, Brooke doesn’t have a main structure to his poem as his point is connoted though out the whole of the sonnet. This sonnet canbe split into two stanzas, the first stanza refers to the physical part of the solider and the second a more psychological point of view. Within the physical part the words used refer to things that can physically be touch ‘bore’ ‘shaped’ ‘made’ in the second is more things you cant touch ‘mind ‘thoughts’ ‘sounds’ ‘dreams’.

Both poets use different types of language to get across their ideas. ‘Dulce et Decorum est’ uses harsh and meaningful language. His uses of metaphors creates deeper impact and imagery ‘blood shod’. Owens opening stanza has caracterism of the language about ‘fatigue’, they ‘limped on’, ‘marched asleep’ this connotes pitiful language which intends to reveal the reality of war. Alliteration is used to reflect the agonising of the gas victim ‘And watch the white eyes writhing in his face’. Owen features a shift of register which grabs the readers attention ‘Gas! Gas! Quick, boys!’ this change of register adds more realism and switches the point of view to a soliders.

Rupert Brooke uses personification to the word ‘England’, ‘gives somewhere back the thoughts by England given’. Brooke uses pure language within his sonnet such as ‘gentleness’ ‘heaven’ love’ ‘blest’.

Compare and contrasts of 'The Soldier' by Rupert Brooke and 'Dulce et Decorum est' Wilfred Owen. (2017, Jul 10). Retrieved from https://studymoose.com/compare-and-contrasts-of-the-soldier-by-rupert-brooke-and-dulce-et-decorum-est-wilfred-owen-essay 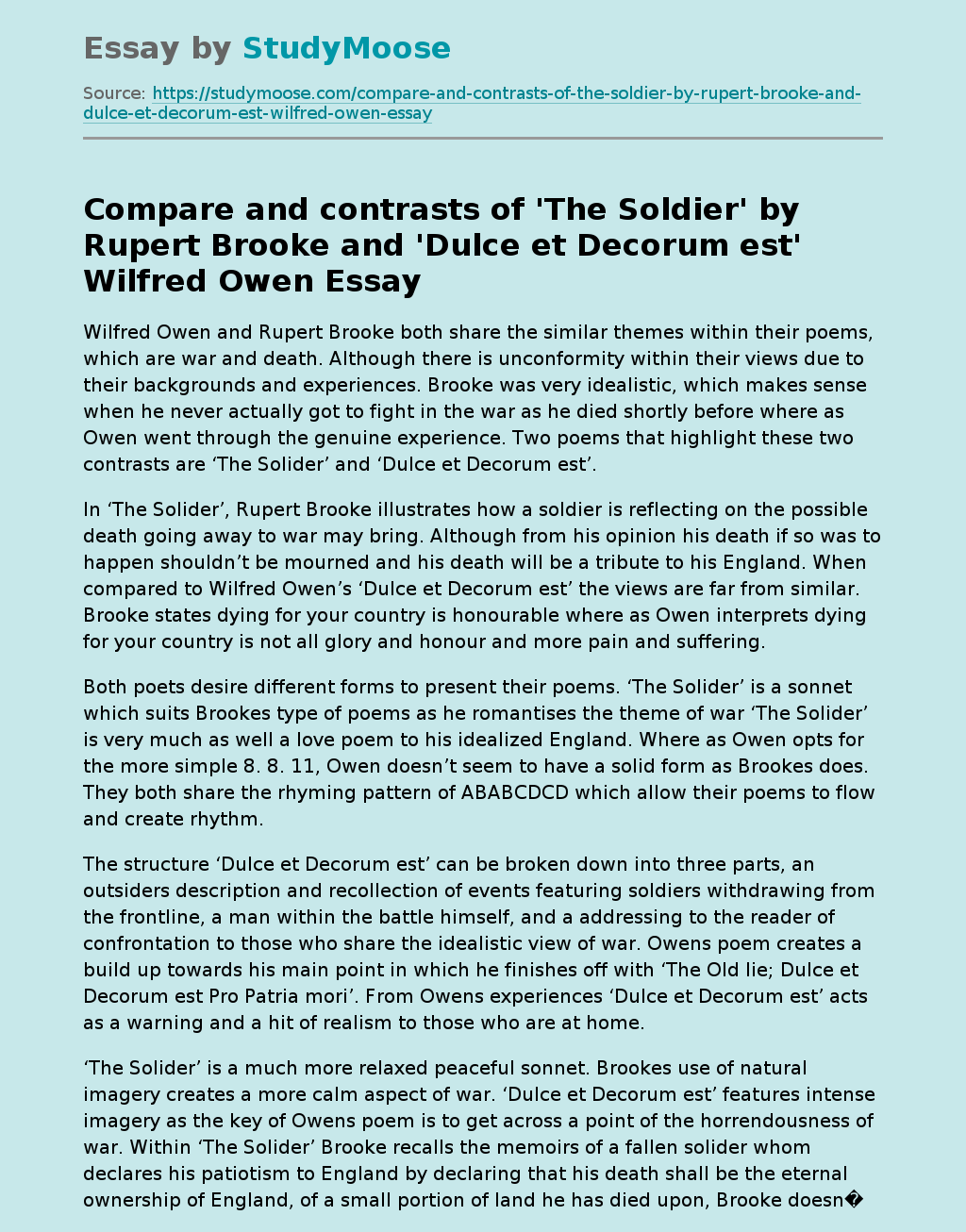