The stories of the two poems are very contrasting, they oppose one another quite obviously. One about the horrors of war, one about how much ‘fun’ it is. Both poems serve a purpose and perform to it very well, using all kinds of techniques to encourage or discourage young men to join the army. The storyline of ‘Who’s for the game’ is telling of how great the war is and how you simply can’t miss out. This is meant to attract young soilders to join the army and fight in the first world war.

Turn in your highest-quality paper
Get a qualified writer to help you with
“ Compare the ways Jessie Pope and Wilfred Owen convey the reality of war in their poetry ”
Get high-quality paper
NEW! AI matching with writer

She makes the war seem like a big fun game by using lines like “Who’s for the game, the biggest thats played, the red crashing game of a fight?”

This entices the young men as they think that the war will be fun and a laugh but also honourable and noble to take part in. It makes it seem like a sort of game and men are persuaded to join in.

In contrast ‘Dulce et decorum est’ has a very different theme and story. The poem tells of an experience of a soldier during an attack in World War One. The mood of the poem is sadness. Sadness could be too weak a word to describe the poem but is still the main emotion that comes to heart.

The horrors of WW1 and trench warfare are involved in “Dulce et Decorum Est”. The fact that Owen experienced the war himself really makes you think how horribly the war was.

The story is also supposed to make everyone realise the loss and pain that the war creates and to discourage men to recrute as it would be a waste of life. It is very effective because if someone read the words “all went lame, all blind.” they would not want that to happen to them and would probably less inclined to join the war.

In Dulce when Owen talks about how if ‘you’ could see what he had seen then you wouldnt tell the old lie: “Dulce et decorum est pro patria mori”(it is sweet and honourable to die for your country) he adresses the reader as“My Friend..” he does this to make the reader feel personally responsible for the deaths of so many men. This makes you feel guilty and more sad about the topic of the poem.

Although this is very effective for the purpose of the poem, he is actually adressing his old ‘friend’ Jessie Pope who obviously wrote ‘Who’s for the Game’ aiming to attract young men in and of course was very successful. Owen believed that she was solely to blame for the death of the soldiers. He thought that she had no right to tell of this great fun game when she had never experienced the horrible conditions of the war and would never have to, so shouldnt be encouraging people to go when she would never be able to go herself.

The language in who’s for the game is very different to in Dulce. Pope writes in a conversational manner which makes the poem more memorable and persuasive. She compares the war to a ‘game’, implying that there is little danger on the battlefield and nearly no chance of dying. She also refers to the war as a sport where a player would return with a minor injury such as a crutch. She persuades the men to join the army by making them feel ashamed and cowardly if they weren’t going to fight for their country.

She also has a friendly manner in her poem as she refers to the men as ‘lads’. On the other hand Dulce uses very formal yet morbid language for his poem to create a serious mood. He uses lots of ‘ugly’ language to put the reader off and make them horrified and disgusted but also sad. An example of ugly language is when he is describing the man dying in his dreams: “he plunges at me, guttering, choking, drowning.” That sequence of those three words; guttering, choking, drowning sounds a lot like coughing something up. It sounds as if Owen is the man choking to death in the gas, practically coughing up his own lungs.

Or as if the memory that Owen experiences if hard to say, that he chokes it up because of the sadness of it. This creates very strong imagry for the viewer to think about. It makes the poem seem more alive and realistic and easier to imagine.

The rhythm of popes poem is very jaunty and lively, creating the mood of a game. It could convey the soldiers marching, or popes idea of a fun and enjoyable war. She uses this upbeat rhythm to abide with the them of the poem and it works very well. It makes the reading of it sound more happy and alive.

Dulce’s rhythm also ties in with its theme. It is quite stodgy and sort of plodding, which mimics the way the soldiers are walking after being on the front line. It means that the poem has more depth than just the words that he is saying. It is also about how you read it and making the rhythm slow moving makes you read it in more of a serious tone.

Both poems use lots of different poetic devices to create vivid imagry. Dulce uses a lot more similies compared to Who’s for the Game. It does this because the poem is more specific and supposed to be realistic and truthful. One very effective device is when Owen says “his hanging face, like a devils sick of sin.” He is describing what the dead soldier looked like after the gas attack. He uses the similie of it being worse than a devils face.

The devil is the worst thing a lot of people can think of and especially back then would have been a horrifying thought and for it to be ‘sick’ of sin would be even worse. He is suggesting that his face looked like the worst thing imaginable and no one should ever have to see that. However although Whos for the Game does not use many similies it does use a lot of metaphors to create a lovely image of this great fun war. It means that she is not exactly telling the truth or she is just creating a better version of her perception of the war.

All in all I think that both poems stick to their purpose very well and are both effective in persuasion. They both use plenty of poetic devices to serve a purpose and create a certain mood or atmosphere. Although having completely different themes they are very similar in how they convey their personal reality of war. They both have their own opinions on war and are trying to get others see it their way.

Compare the ways Jessie Pope and Wilfred Owen convey the reality of war in their poetry. (2016, May 22). Retrieved from https://studymoose.com/compare-the-ways-jessie-pope-and-wilfred-owen-convey-the-reality-of-war-in-their-poetry-essay 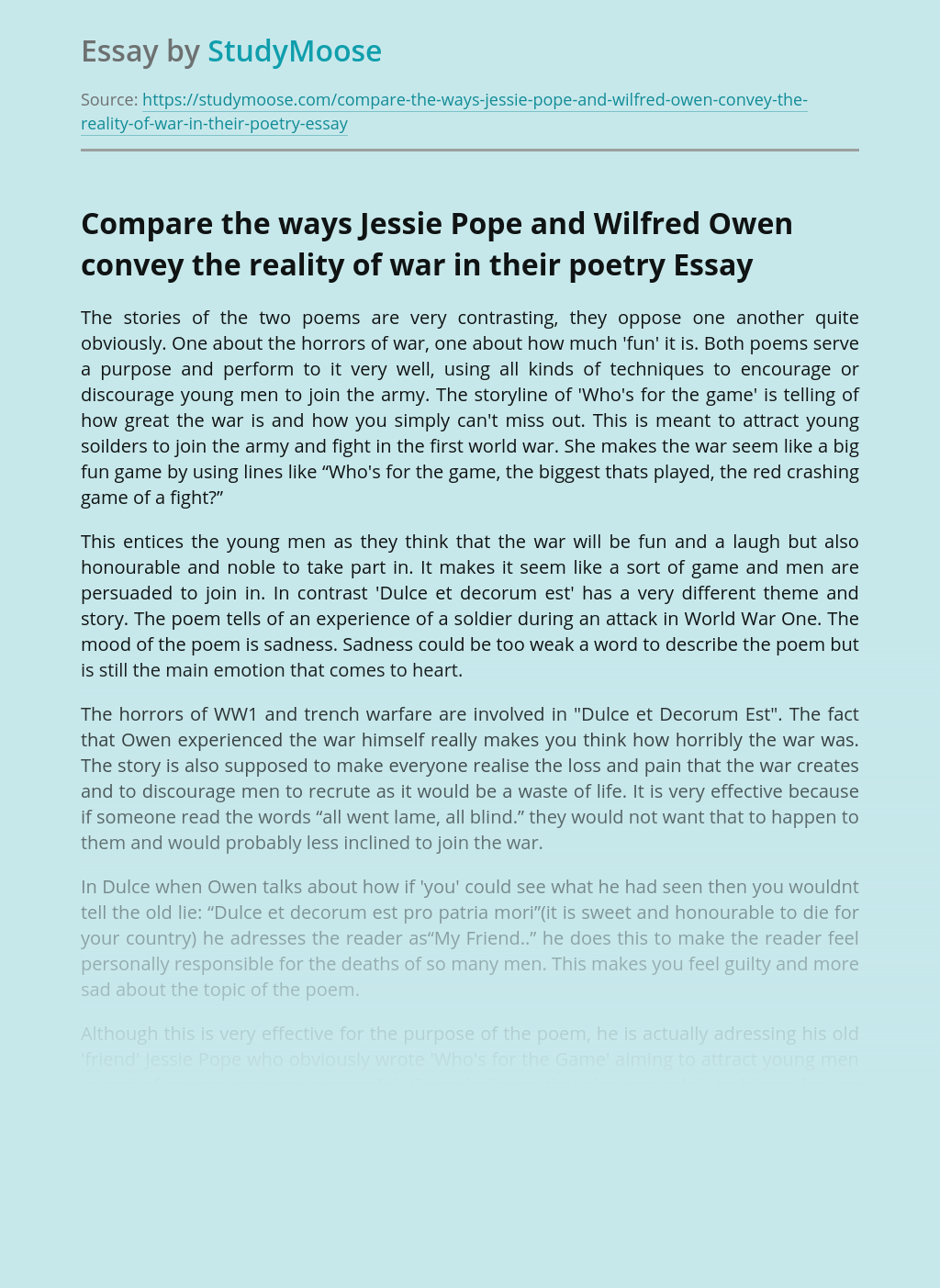 Turn in your highest-quality paper
Get a qualified writer to help you with
“ Compare the ways Jessie Pope and Wilfred Owen convey the reality of war in their poetry ”
Get high-quality paper
Helping students since 2015
Stay Safe, Stay Original