Slavery was ongoing in the southern states. In the 1800’s many white slave owners believed that the African Americans were inferior to them despite the fact that “”all men are created equal”. They were forced into labor and treated like property. The slave owners justified their behavior and believed they acted caring and conscientious to their slaves. Truthfully, however, the slaves were mostly treated very badly, as Fredrick Douglas, a black slave, testifies. There were select groups of white men who realized the abuses of slavery and worked to abolish it.

Don't use plagiarized sources.
Get Your Custom Essay on Slavery Essay Just from $13,9/Page

Not many white people admired these abolitionists, but as time went by their support was increased.

There were many people against slavery by the 1820’s. many antislavery societies believed that the African Americans were an inferior race and could not coexist with the white people. The whites increasingly joined the African Americans in openly criticizing slavery. Charles G. Finney supported the whites for “abolition” and termed slavery “a great national sin”.

William Lloyd Garrison, a radical white abolitionist, was an editor of an antislavery paper. In his newspaper he delivered an uncompromising message. He wanted immediate emancipation, the freeing of slaves, with no payment to the slaveholders. Before Garrison announced this emancipation, support for this position was limited. However, many white abolitionists began to respond to his words in the 1830’s. Garrison founded the New England Anti-Slavery society in 1832 and helped fund it the following year also. Majority of his subscribers were African Americans. Many white men opposed Garrison when he attacked the churches and government for failing to condemn slavery. The whites distanced themselves even more when Garrison associated himself with David Walker. David Walker was a free black from North Carolina who moved to Boston. He urged blacks to rise up and take their freedom by force. Walker advised African Americans to fight for their freedom rather than just wait for slavery to end, in his appeal to the colored citizens of the world.

The majority of free blacks expressed less extreme views that walker, but still formed anti-slavery groups by the end of the 1820’s. in 1850 there were approximately 434,000 free blacks who worked as day laborers for white employers in the south. Some did hold jobs, such as artisans, craftsmen, or seamstresses. In the north, free blacks were faced with society that advocated segregation and job discrimination and offered only the lowest paying jobs to them. Fredrick Douglass, however, was able to rise above all limitations that white society imposed. Fredrick Douglas was born into slavery in 1817 and was taught how to read and write by the wife of one of his owners. She was told to stop by her husband because, as he said, reading “would forever unfit him to be a slave”.

Douglas only studied harder when he realized that his knowledge could be his pathway to freedom. By 1838, Douglas held a skilled job in Baltimore. He worked well and earned high wages, but his slave owner took his pay each week. Douglas decided to escape after having an argument with his owner. He borrowed the identity and official papers of a free black sailor and went onto the train. He tasted freedom for the first when he reached New York. When Garrison heard Douglas speak about his experiences, he was impressed and sponsored Douglas as a lecturer for the American Anti-Slavery society. Everyone who listened to Douglas speak loved him, as he was an amazing speaker. In 1847 Douglas broke from Garrison and began his own anti slavery newspaper. He named it the North star, after the star that guided runaway slaves who escaped, but there were still thousands of more slaves enslaved.

The word freedom is defined as “not under the control of some other person or some arbitrary power”. They also go on to define free as, “Having or existing under a government that does not impose arbitrary restrictions on the right to speak, assemble, petition, vote, ect.” the significance of a free state is clearly understood from these 2 definitions. a free state does not have to be slaves for other people, and does not have to follow the rules and guidelines that the government imposes. a free state can follow their own wants and needs without having to obey the government. When Free states came about, there was more peace in the world. There weren’t people or governments telling others what to do, rather they chose what and what not to do.

We now see how slavery impacted southern American in the seventeenth century. 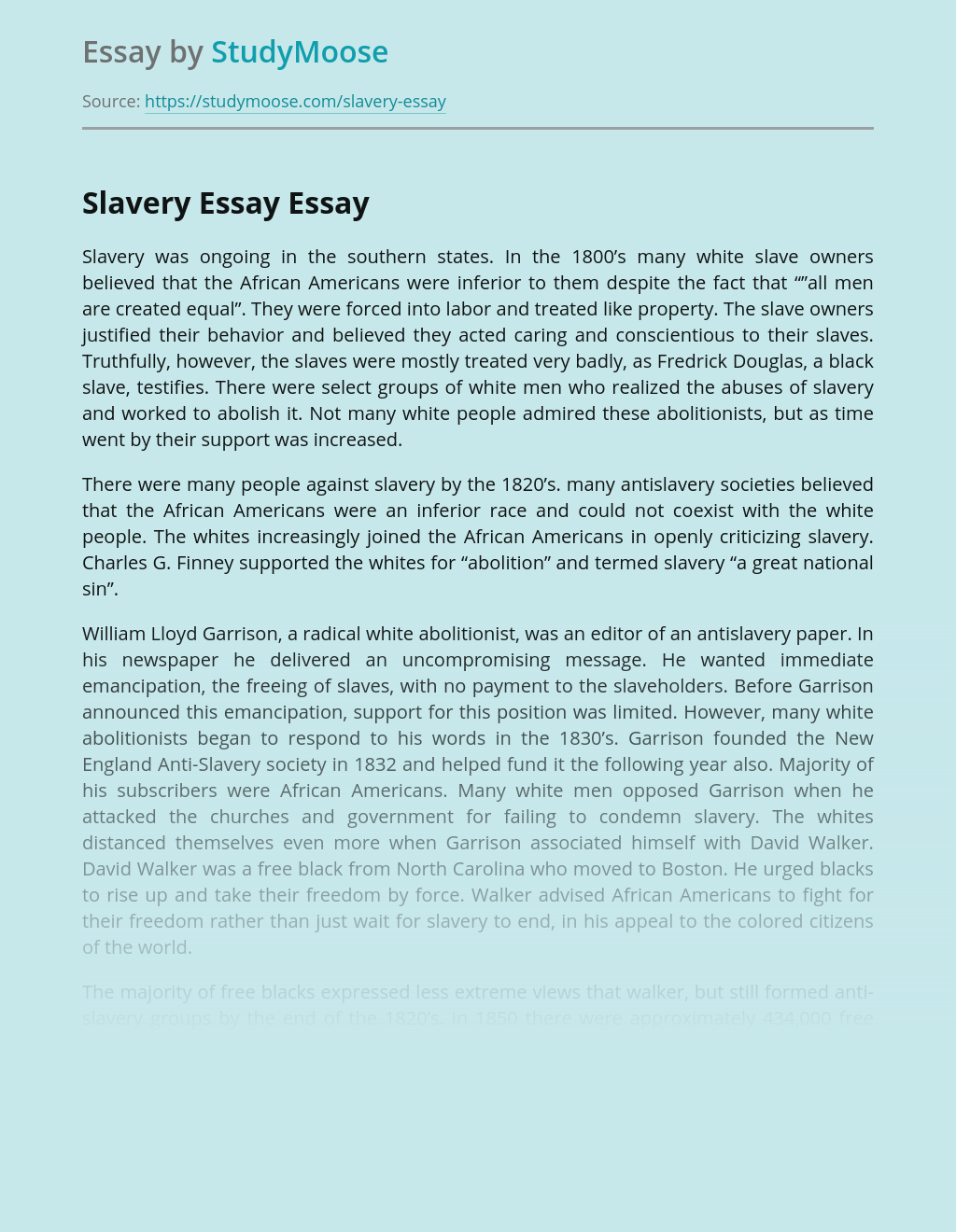 The Labor Problem at Jamestown

1-Introduction In the article ‘ The Labor Problem at Jamestown’ Edmund S. Morgan discusses the lackadaisical efforts of the newly settled English in Jamestown, Virginia, however brings to question the previous English economy and its role in their “ Idleness.” Morgan questions the first settler’s work ethic despite being starved to death, but provides an... VIEW ESSAY

Prior to David Walker’s Attract the Colored People of the World during the 1800’s, there had not been any other type of anti-slavery documents released. Although the Appeal is directed to black servants, its effective moral message and indictment of white America’s hypocritical society and oppressive, ruthless system of slavery is an ethical message that... VIEW ESSAY

View sample
Get Essay
Slavery in the Chocolate Industry

New York Burning is a book written by Jill Lepore narrating a story about parts of history in New York City. The book implies as to how single sort of slavery made such type of liberty in New York during 18th century, as NY was considered a dazzling city as the people will see such... VIEW ESSAY