In the years of 1830-1860, many northern americans came to see slavery as an evil, while many southerners defended the institution as a positive good. Why did the North and South come to such different views of slavery in the years prior to the Civil War? You pretty much just restated the question but it is by far the best I have read. You need to try to say the same thing with different words. Make it your own statement. Leading to the Civil War slavery was the basis of the opposition between the north and south and they came to view slavery differently because both were inspired to their beliefs by the economy which brought about their moral beliefs.

Turn in your highest-quality paper
Get a qualified writer to help you with
“ Slavery DBQ ”
Get high-quality paper
NEW! AI matching with writer

The issue with slavery was really its expansion into the territories. The North was not actually trying to free the slaves in the South. They just didn’t want the institution to spread hoping that by eliminating the number of slave states that the South would eventually end slavery themselves.

The South feared that with every new free state that the life of slavery was closer to an end.

Northern abolitionists felt that slavery was evil. Fugitive Slave laws caused many northerners to become abolitionists because of how they saw runaway slaves being taken back to the south. (Doc C) It also imposed high penalties for people who tried to help runaway slaves in the Underground Railroad. Uncle Tom’s Cabin by Harriet Beecher Stowe opened the eyes of northerners to the peculiar institution.

(Doc H) Some felt that it was religiously wrong. (Doc D) The American Colonization Society wanted to deport the Africans to Africa. It was a competition between northern blacks and whites for jobs and there would be a lot more available if slavery was abolished or if they were deported altogether. Many people also thought that slavery went against the constitution which was based on equality and rights of man. (Doc F) We fought for independence then turned around and enslaved other people.

Way too much just referring to the documents. You are to write your essay. You are to give your answer and then plug in the documents where they belong. Tell the story and then cite the example. When you rely on the documents you are just restating what it says. Don’t limit yourself. Write your paper and then go back and cite what you have said with the document. Your writing does not have to say exactly what the document says it can infer.
The southern aristocracy depended on slave labour too much to believe it was wrong.

What exactly does that mean? Can you prove the next statement? What if they just hired immigrants to work the fields? They wouldn’t have to spend $1200 dollars. They could fire a person who wasn’t doing a good job. They wouldn’t have to provide shelter, clothing and food. Can you prove to me that without slavery that the South could not have produced as much cotton? They wouldn’t be able to export nearly as much cotton and they saw no reason to stop. (Doc B) If there was no slavery the southern aristocrats wouldn’t hold as much power and would be reduced to the same level as slave-less subsistence farmers. ​

Why would they not have a much power? They would still have a ton more land? They would still have their other personal properties. Southern slave owners felt slavery was a good thing because they said that slaves were better off there than living in the poverty stricken, crowded north working at a factory. (Doc A) Slave masters incorporated religion into a way that made slavery seem like an act of god and taught slaves to believe that god wanted them to work. (Doc G) The Free-Soil Party was against slavery in new territories. The South couldn’t let new territories become free states because they would ruin the balance and make slavery illegal. Not necessarily true statement.

They had to make sure that they were at least equal to the north in voting abilities. The Kansas Nebraska Act revoked the norths precious Missouri Compromise and said that they could decide on slavery with popular sovereignty. This caused more tension between the north and the south leading to the civil war. When Abraham Lincoln became president, the south saw it as the north will be able to take away their right to own slaves if they don’t secede from the Union. (Doc I) ​

You should have explained the K-N Act and the MC. What if I don’t know anything about them. 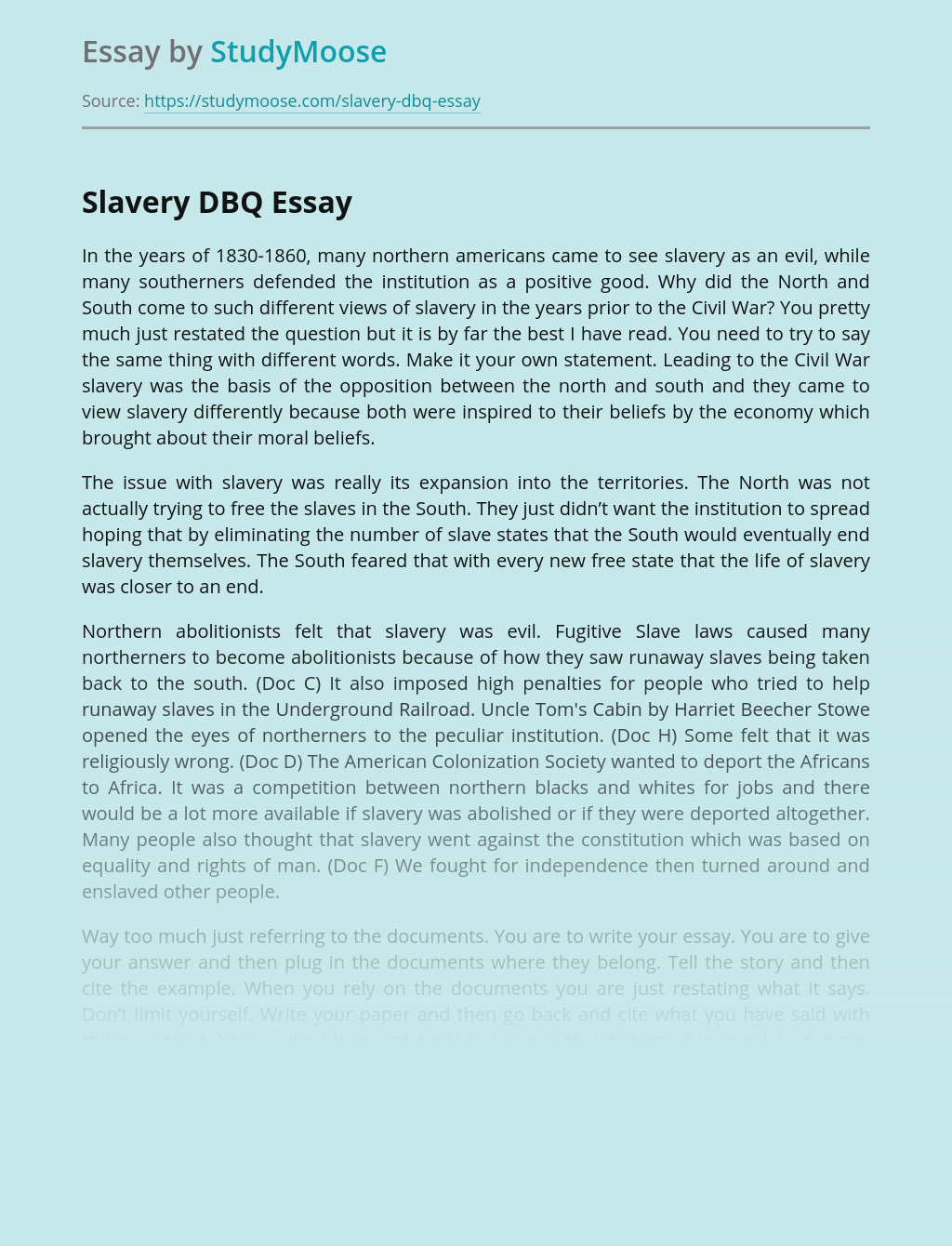 Turn in your highest-quality paper
Get a qualified writer to help you with
“ Slavery DBQ ”
Get high-quality paper
Helping students since 2015
Stay Safe, Stay Original