Suspense in the Film North by North West

Alfred Hitchcock’s film North by Northwest reflects an extraordinary use of setting combined with brilliant camera angles and techniques to evoke emotion and to create suspense. The film’s exciting and suspenseful tone is established very quickly once Thornhill is shockingly kidnapped by two thugs while socializing with friends in a safe and public environment, the Plaza Hotel. Also the film displays scenes in which the viewer is placed in the point of view of the characters. Therefore immediate suspense and emotion captivates the audience because each viewer feels as though they are in the actual scene themselves.

Don't use plagiarized sources. Get your custom essay on
“ Suspense in the Film North by North West ”
Get custom paper
NEW! smart matching with writer

In addition, real-life suspense is created through the film’s brilliant use of various camera angles and techniques. The film has the ability to create suspense through its unique use of setting, combined with its remarkable use of different camera angles. In the beginning of the film, Thornhill is kidnapped while at a busy and sophisticated bar within the Plaza Hotel. This is a unique setting for a kidnapping scene because Thornhill is abducted while socializing with friends in a safe and familiar setting.

Normally characters are kidnapped dark, scary, and secluded settings where there are no witnesses.

Instead, Hitchcock does the opposite by having Thornhill kidnapped in a busy bar during the middle of the day. He is surprisingly captured in a comfortable setting that was very much a part of his upscale and suave lifestyle. Hence the audience is stunned to see the plot change dramatically during the most unexpected moment and setting.

Along with great use of setting, the film also uses spectacular camera techniques in order to create suspense and evoke the emotions of the viewer. For instance, the crop field scene features an astonishing setting combined with great camera angles.

The scene has a suspenseful tone because it occurs during a bright sunny day, and in the middle of an empty crop field. As Lang Thompson wrote in his article “North by Northwest”, ” The famous scene of Cary Grant being chased through a cornfield by a crop duster is an example of Hitchcock at his best. It came about because he had noticed that when most directors try to make a suspenseful scene they use tight alleyways, shadows barely visible through the gloom and the slow building tension of the approaching menace. So Hitchcock did exactly the opposite: full daylight, completely open space and a very fast machine”.

This desolate, eerie setting causes the viewer to feel sympathy for Thornhill, because one immediately realizes how vulnerable and alone he is during this moment. In addition to setting, suspense is created through the scene’s use of point of view shots. This camera shot causes the plane to appear as though it is coming directly toward the screen as it gets gradually gets closer to Thornhill. As a result the audience feels as though they are being attacked by the plane themselves. The scene’s eerie setting combined with excellent point of view shots create a tone of suspense that can rarely be matched.

Hitchcock uses brilliant camera angles to heighten the amount of suspense and emotion. The excellent use of different camera angles can especially be seen during the scene in which both Thornhill and Eve depart from the train in Chicago. Throughout this scene, there are only a few subtle changes within each preceding camera angle and shot. Although the change between camera angles is subtle, they are astonishingly powerful because of the way they are able to create suspense and spur emotion.

For example, when both Thornhill and Eve get off the train he camera is focused only on Eve while she walks toward the police officers. At this point the audience has no idea where Thornhill is, and have no idea if he had already been caught or not. Knowing this, Hitchcock decides to slowly change the focus off of Eve and onto the unknown transit employee carrying her bags. At this moment the camera is angled in a way that hides the facial identity of the transit employee. Immediately after , the viewer is slowly brought to the next camera angle which shockingly reveals that the unknown man is actually Thornhill disguised in uniform.

The use of camera angles within this scene are truly brilliant, because for the first time the audience actually knows less about Thornhill’s situation than does Thornhill himself. In conclusion, it is quite evident that the unique settings, extravagant shooting techniques, and brilliant use of camera angling can all be credited for making North by Northwest one of the most suspenseful films ever made. One is immediately captivated by the film’s suspensful tone once Thornhill is surprisingly kidnapped during the most unexpected and unusual setting imaginable.

In addition, the film has the ability to create an unrivaled feeling of suspense through its clever combination of both unique settings matched with extraordinary camera techniques. For example, point of view shots are used to increase the suspense and horror felt during the scene in which Thornhill is chased by a plane in a desolate crop field. Also the film is able to evoke fear and emotion by using different camera angles in order to hide or reveal things that are currently happening within the film. North by Northwest is truly a special film because it reflected an unrivaled tone of suspense by critiquing basic film elements.

Suspense in the Film North by North West. (2016, Dec 20). Retrieved from https://studymoose.com/suspense-in-the-film-north-by-north-west-essay 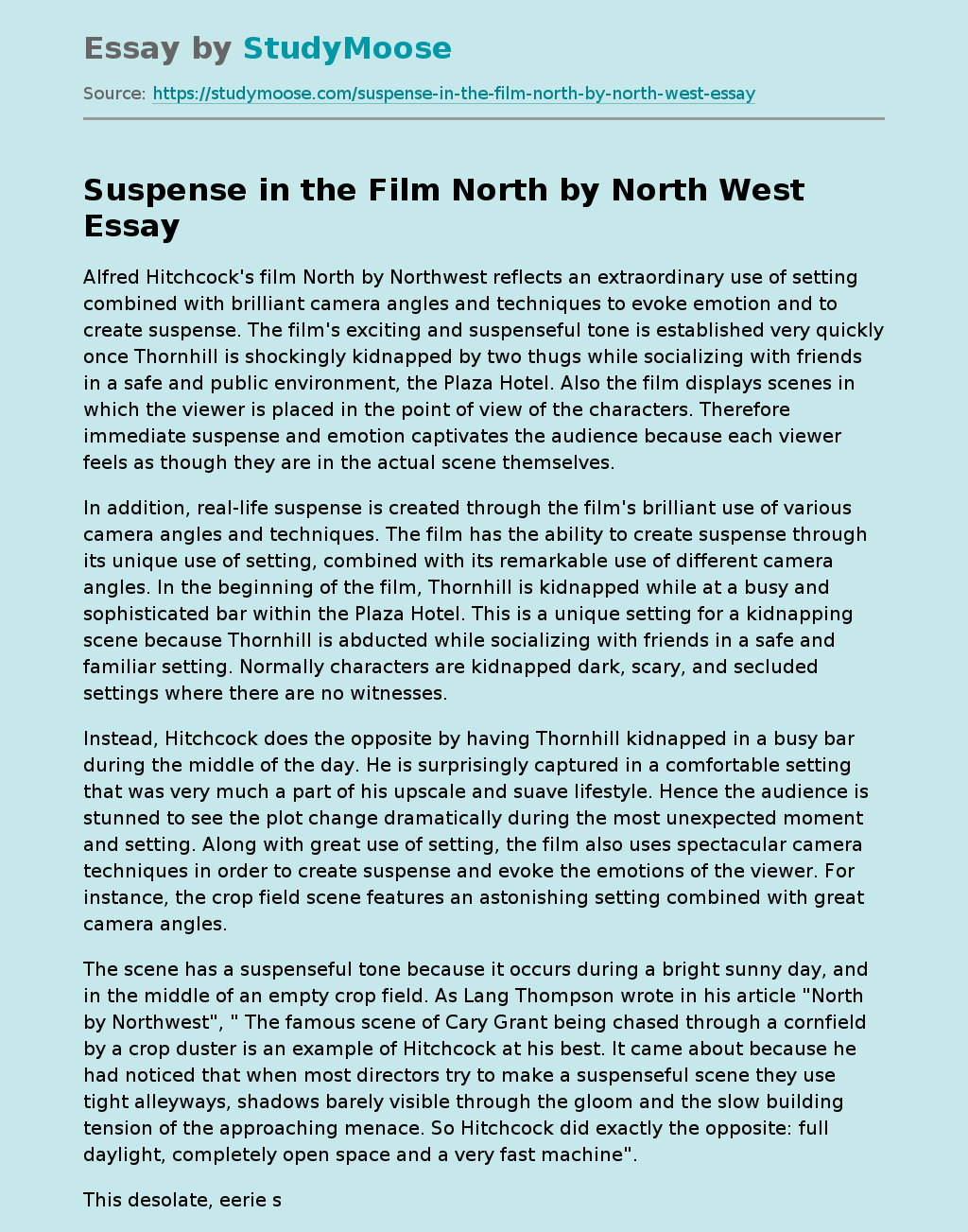