How does Robert Louis Stevenson Create a sense of Mystery, Horror and Suspense?

In the novella “The Strange Case of Dr Jekyll and Mr. Hyde” Robert Louise Stevenson uses many techniques to create a sense of mystery, horror and suspense. In this essay I will be analyzing some of these techniques in further depth. I will be explaining what effect these techniques will have on the reader.

“The strange case of Dr Jekyll and Mr. Hyde” was published in 1886 and is probably the best known of Stevenson’s novels. It concerns the fine divide between good and evil.

Turn in your highest-quality paper
Get a qualified writer to help you with
“ How does Robert Louis Stevenson Create a sense of Mystery, Horror and Suspense? ”
Get high-quality paper
NEW! AI matching with writer

In the book the reader finds out more about how and why Dr Jekyll created a potion that separates the good side from the evil side, of the person. Unfortunately he lost control of the situation, resulting in a number of unfortunate events.

Mr. Utterson is widely regarded as a good man, there is much evidence in “The Strange Case of Dr Jekyll and Mr. Hyde” to back this statement up. One piece of evidence to show this is when the reader is told “something eminently human beaconed from his eyes”.

This is a short and meaningful insight into the persona of Mr. Utterson. . We are also told that he had a “approved tolerance for others”. This is more evidence to show that he could empathise and care about people. This also makes the audience think that he will be tested. He is also said to be “the last good influence in the lives of down going men”, he is known to be a compassionate man, he looks to help people rather than judge them.

This also makes the reader think that being a client of Mr Utterson, Dr Jekyll may be possible in store to be coming into some trouble.

We are told much about Dr Jekyll’s House in the novel. “Showed no windows”, what does it mean to the reader, why would this mysterious character have no windows, what is he hiding, or what is hiding in there. This raises questions to the audience about the man, why would a man in a respected profession such as a doctor want to be living a life like this in a house with no windows. It says that “the wall was discoloured” and the it “bore marks of prolonged and sordid negligence”. This leads the audience to wonder, what would cause the walls to be discoloured and why does man take so little pride in his abode. The writer Robert Louse Stevenson uses words like the word sordid to create an image of evil and wickedness. IT is said to be “blistered and disdained” and have “neither bell or knocker”.

The later of the two statements bears more negative connotations than the former. The fact that the house has no bell or knocker signifies to the reader that Dr Jekyll does not wish to be disturbed thus adding to the atmosphere of secrecy. Why would a man such like Dr Jekyll wish not to bothered what is he hiding in this house. The Final Statement regarding the dwelling of Dr Jekyll is typical of gothic writings of that era, it has mysterious connotations that intrigue the reader in saying “some place at the end of the world”. It also conjures up images of evil when Enfield says “Black winter morning”.

On page 11 the reader is recounted the story of how Mr. Hyde trampled over the child. This is most probably the best example of the Robert Lewis Stevenson using specific techniques to create an innate sense of horror. He uses a common technique of the era, using descriptive, detailed language to intensify the sense of horror. For instance he says “some place at the end of the world about three o’clock of a black winter morning”, he also goes on to say about how empty and lifeless the streets were. The reader is also made to feel fearful, wary and loathsome towards this beast whom is said to have felt no remorse for the heinous act he had just committed. The writer instills these feelings within us by saying thing like “the man trampled calmly over the child’s body” this not only makes the reader horrified that someone could do such a thing, is also exceedingly curious as to who this man could be and why is he so remorseless for what he has done.

Mr. Enfield makes several accounts of Mr. Hyde’s persona. The way in which Mr. Enfield reacts to the sight of Mr. Hyde makes the reader believe he must be a truly terrible man to provoke such a reaction from a well respected man such as Mr. Enfield. Mr. Enfield Says that Hyde “gave me one look, so ugly that it brought the sweat on me like running”, The reader will immediately relate someone being hideously ugly to them being morally objectionable.

He also says “I had taken a loathing to the man at first sight” the reader questions what could it be that causes him to beacon this loathsome aura. It is said by Enfield that it was not only him to feel this way towards Hyde “I saw that sawbones turn sick and white with the desire to kill him” the reader wonders what could possible cause a man you whom had previously been described as emotionless to feel this way to a man he does not even know. The final account of Hyde is short but is nonetheless important it is when Hyde is described as being “really like Satan”. This is a grave accusation to make, saying that a man is like Satan the epitome of all that is evil. It is not false though Hyde is all that is evil within Dr. Jekyll.

Mr. Enfield says that the man he saw was “of the name Hyde”. This name has a eerie ring to it, it carries a certain mystique. When people hear the name Hyde they immediately think of secrecy and what is the secrecy for. Later in the novel Utterson makes reference to Hyde’s name saying “If he is Mr. Hyde then I shall be Mr. Seek”. This immediately makes the reader think of the childhood game hide and seek. If this mans name is Hyde then why must he be found, what will he do?

One technique that Stevenson uses to great effect is withholding information about the character Mr. Hyde. Mr. Enfield says “no sir I had a delicacy, I feel very strongly about putting questions”. This is Enfield saying that he did not inquire too deeply about Hyde. This creates mystery and suspense. Hyde is a mysterious character who the reader knows very little about but is intrigued by. Suspense is created by the fear of what this man is going to do. Enfield and Utterson also agree not to talk about this man again. This makes the reader incredibly suspicious of why it is that these two men do not wish to speak about this incident.

Mr. Utterson states on page fifteen that already knows of Mr. Hyde saying “The fact is, if I do not ask you the name of the other party, it is because I know it already”. This shows to the reader that Mr. Utterson knows more than he is letting on. This makes the audience suspicious as to why a good man like Utterson would feel the need to keep this information to himself.

Dr. Jekyll’s will is very bizarre it says that “in the case of Dr. Jekyll’s disappearance or unexplained absence for any period exceeding three calendar months, the said Edward Hyde should step into the said Henry Jekyll’s shoes without further delay”. This engages the readers interest as to what the connection is between Dr. Jekyll and Mr. Hyde. It’s irrationality is said to have “offended Mr. Utterson both as a lawyer and a lover of the sane”. It is strange because it does not say that he should be dead before he steps in.

Mr. Utterson is left baffled by what has been written in Jekyll’s will and decides to go visit Dr. Lanyon. Lanyon tells Utterson that ten years ago “he began to go wrong in the mind”. This raises suspicions in the readers mind about Dr. Jekyll now that they see that one of his dearest friends now speaks of him in such a way. He sys that his “unscientific balderdash” was so delirious and immoral that is could have “estranged Damon and Pythias” who in Greek mythology are known for being inseparable friends. The reader must wonder what it is that Dr. Jekyll did to provoke such a claim from a close friend.

Lanyon says to Utterson that he knows not of Hyde. This makes the audience suspicious of how it is possible for a man who claims to have been so close to Dr. Jekyll, but does not even know the man who he wishes to leave his entire estate to.

We are told that Mr. Enfield’s “imagination also was engaged, or rather enslaved; as he lay and tossed in the gross darkness of the night”. Stevenson tells the reader that Utterson is imagining all of the terrible things that this Hyde character could have done. This automatically makes the reader imagine which builds up a sense of horror in the readers mind.

We are told that Utterson did not know what Hyde looked like. Like Mr. Utterson the reader will imagine the worst of what Mr. Hyde looks like. He is described as a “human Juggernaut” the word Juggernaut instills images of an untamed beast that you must be cautious around. “It was the face of a man who was without bowels of mercy” This makes the reader tense about how terrible this man could be. “Spirit of enduring hatred” it could be because of the way Enfield reacted to this man that has caused Utterson to feel this way.

When Utterson finally meets Hyde it is a very Dramatic tense scene full of typical language from gothic writings of that era e.g. “it was a fine dry night, frost in the air, the streets as clean as a ball room” this is typical extremely descriptive scene setting. From previous descriptions of Mr. Hyde the reader can only expect the worse for Mr. Utterson.

How does Robert Louis Stevenson Create a sense of Mystery, Horror and Suspense?. (2017, Nov 02). Retrieved from https://studymoose.com/how-does-robert-louis-stevenson-create-a-sense-of-mystery-horror-and-suspense-essay 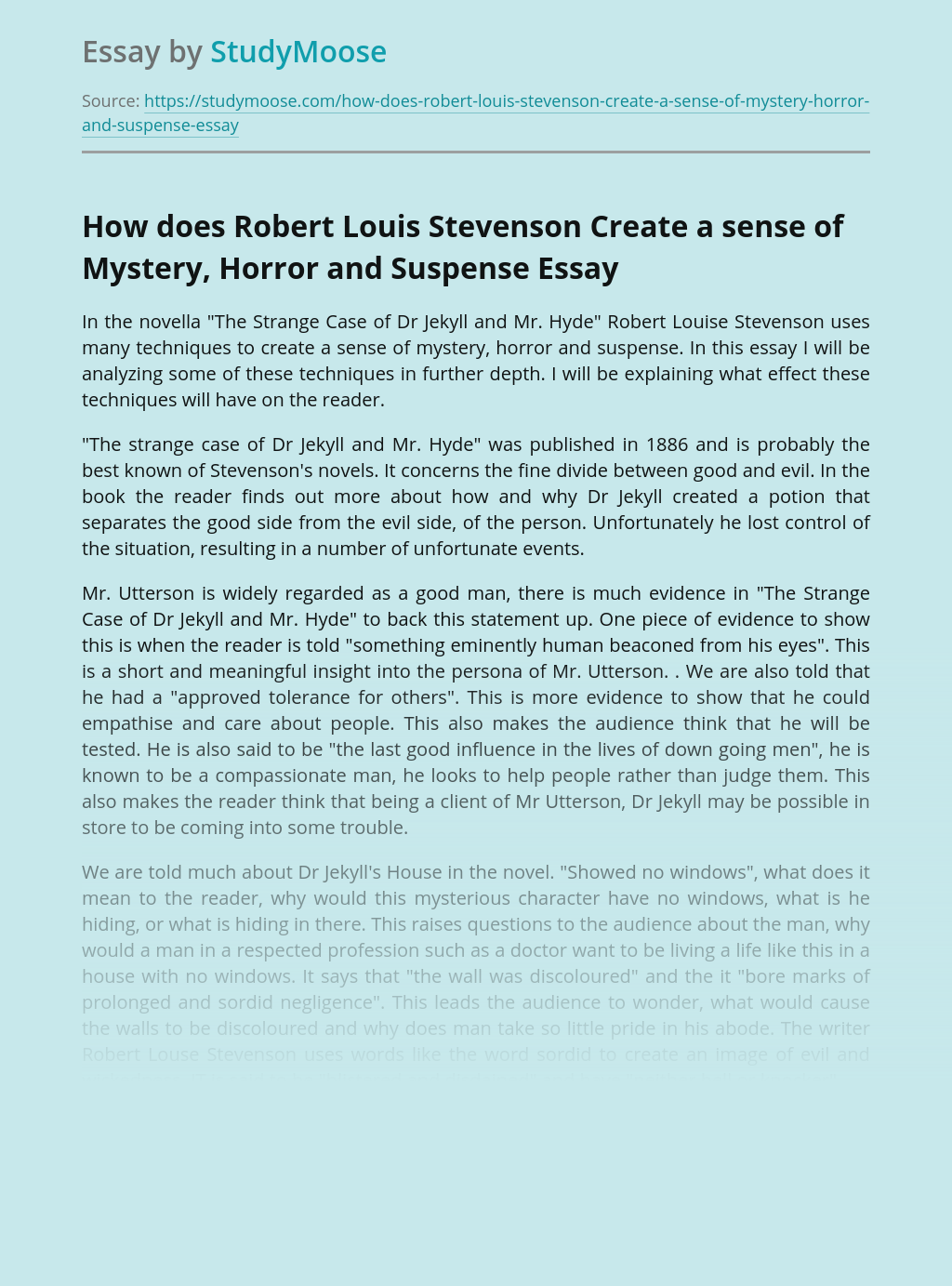 Turn in your highest-quality paper
Get a qualified writer to help you with
“ How does Robert Louis Stevenson Create a sense of Mystery, Horror and Suspense? ”
Get high-quality paper
Helping students since 2015
Stay Safe, Stay Original