How does Stevenson explore duality in The Strange Case of Dr Jekyll and Mr Hyde?

The idea of duality, in this case, of people displaying duality of character, being “two faced”, of showing contrasting sides to a person, was of much interest to people in the late 19th century, due to the way it reflected upon their society, and was a key concept of Gothic literature written at the time. In this essay, I shall see how Stevenson explores this, the techniques and methods he uses, and the way in which he shows us how duality is significant in Victorian society.

Don't use plagiarized sources. Get your custom essay on
“ How does Stevenson explore duality in The Strange Case of Dr Jekyll and Mr Hyde? ”
Get custom paper
NEW! smart matching with writer

The Strange Case of Dr Jekyll and Mr Hyde was one of the first novels to re-introduce the Gothic literary genre, and thus has several elements that are common to other Gothic novels, which I shall explore in this chapter. With Gothicism being a genre of horror fiction, almost all Gothic novels have some kind of monster as the antagonist. Mr Hyde, although generally regarded as human (a point which I will explore further later on), is quite obviously a monster in the original sense, that is, a being of pure evil and sadism.

He is described as a repulsive, grotesque person, for example, by Mr Enfield: “There is something wrong with his appearance; something displeasing, something downright detestable … he gives a strong feeling of deformity, although I couldn’t specify the point.”

The fact that his features are not truly described, but only hinted on vaguely, is also important; it is common for Gothic literature to prey upon the fear of the unknown. Hyde as a monster is only ever witnessed through the eyes of others’, in other words, at no point in the novel do we get an explanation from his viewpoint.

This is also another Gothic technique, designed to de-humanise the monster: if we could see things from it’s perspective, we could sympathise with it, therefore this is not allowed.

In this novel, the idea of a monster is combined with another Gothic element: the double. The double is the idea of duality taken to an extreme, physical level: a character who has two different forms, often with one being good, the other evil. Common doubles in Gothic literature include werewolves, people who transform from regular humans into a wolf form, and vampires, people who, by night, become blood-sucking monsters. Hyde is the double of Jekyll; although he has a different form, he is not an entirely separate person, but is the evil side of Jekyll. By creating Hyde, Jekyll allows himself to express his innermost desires, without receiving the consequences, such as shame, guilt, or a loss of respect and reputation. This is part of one of the key themes of the book, which is exposing duality in Victorian society, that will be explored later.

Finally, there is one thing that sets Jekyll and Hyde apart from other Gothic novels. Usually, they are set in very remote places, often in foreign, Catholic countries. This distances the reader from the often scary events happening, however, in Jekyll and Hyde, the fact that it is set in London makes the events seem much closer and real, and therefore scarier. Other than this minor point, however, it is easy to see how Stevenson uses the Gothic genre to explore duality in the book.

Stevenson also uses a particular style of writing and a variety of techniques that help to explore duality, for example, the story is titled as “The Case of…”, which, as well as being a case as in a particular event, it is in some ways presented almost as a legal case. As the story unfolds, we see Mr Utterson on an investigation, with “evidence” in the form of accounts from Mr Enfield, the maid and others, as well as various letters and the will made by Dr Jekyll. At the end of the book, we get the full statements of the two main witnesses, Dr Jekyll and Dr Lanyon. As noted before, Mr Hyde’s recollection of the events is never known.

By writing in this way, Stevenson clearly shows us contrast between the protagonist “prosecutor” and the antagonist “defendant” in the book, as well as involving the other characters as more neutral witnesses, but leaving it open to speculation whether they are in this case necessarily good or bad, exposing their duality, for example with Dr Jekyll, who, although he obviously hates Hyde for his crimes, still continues to crave becoming him for the purposes of expressing his desires.

Another technique Stevenson uses is symbolism, mostly in the form of weather, for example, the city streets were filled with smog when Hyde was out, and in chapters 2 and 4, where Utterson and others are trying to find Mr Hyde, there is a thick early-morning fog. This, although common in London at the time, still had associations of secrecy and obscurity, as it was the domain of people like Jack the Ripper, and therefore the perfect setting for the crimes of Mr Hyde. As well as weather, Stevenson used the symbolism of doors and windows also as metaphors for secrecy. For instance, in Jekyll’s laboratory, it is always behind the closed cabinet door that he transforms into Hyde, and it is only when this door is broken down that the mystery is solved. Also, when Utterson and Enfield go to speak with Jekyll in Incident at the Window, the window serves as a barrier between Utterson and the truth that Jekyll hides.

To understand how the book as a whole expresses duality, it is important to understand how contemporary readers would have viewed and reacted to the book. Obviously, at the time it was published, readers would have not suspected the idea of transforming into an evil doppelgï¿½nger was the key to the mystery about Jekyll and Hyde. We should bear in mind that the most logical solutions are that Jekyll and Hyde were having a homosexual relationship, that Hyde was the illegitimate son of Jekyll, or that Jekyll was somehow being intimidated and controlled by Hyde, possibly via blackmail or debt; contemporary readers would probably have guessed that one of those was the most likely to be the case. It is also important to understand how readers would have viewed Hyde.

In the late 19th century, many post-Darwinist theories about evolution and creationism were being discussed and debated, and people were beginning to accept the idea that humans were descended from apes. From this came the idea that people who were socially unacceptable, that is, anyone who did not confirm to the Victorian ideals of etiquette and manners, could be regarded as less evolved, and in a way sub-human. This is highly evident with Mr Hyde, who is described as being very short, deformed and ape-like.

There is, however, a final point about the readers of the book, which I regard as one of the most important, and it is what made the book so shocking and controversial at the time. This is the way in which the book exposes the duality that was present in Victorian society, which is displayed by the important characters in the book. Society and culture at the time were based highly on etiquette and conformity, and of appearing the best as possible in public. Any person’s vices were kept behind closed doors, even with close friends and family, and thus, this lead to people leading very separate public and private lives. In Jekyll and Hyde, Stevenson shows this to some extent with all of the major characters, the most significant of which I shall explore further.

Mr Utterson seems to be the most single-track, sincere character, however, he does display moral ambivalence as a lawyer. In his own words, “I let my brother go to the Devil in his own way”. At first, it seems that it is good of him, as a lawyer, to not judge people at all, however, although this seems helpful, it can also be bad, for example it means that he will not step in to help someone who is “going to the Devil”, but rather let them sort things out in their own way. He only seems to change this at the end of the book, and that is only because Poole suspects that Hyde has murdered Dr Jekyll.

Mr Carew, an MP, is clearly shown as being a well-mannered gentlemanly figure, but because of this, we can not help but wonder why he is out in a shady district of London at night, and what he said to anger Mr Hyde so much (if anything). This shows once again the idea of having a private life, kept hidden and separate from your public life, which is what Carew appears to be doing.

Finally, there is Dr Jekyll. Throughout the book he is described as a good man, who was respectable, admired by his friends, as someone seen as nearly perfect by Victorian standards. However, beneath the public face we can see that his fascination with Mr Hyde is not purely scientific. Once he has experienced what it is like to be in Hyde’s body, he begins to crave it more, this is because, through Hyde, he can do things that are completely unacceptable, even by modern standards. The book suggests that, as well as murder, he practised many sexual perversions, and similar acts. This shows how a man can fall and become a lesser human, as noted before, and that this is achieved by science. At the time, people believed in the idea that humanity could reach a peak level, and then devolve, becoming ape-like once again, Jekyll and Hyde could be seen as a metaphor for this.

As you can see, Stevenson uses these characters effectively as well a wide variety of literary techniques and in the style of a Gothic novel to explore duality and how it relates to society at the time.

How does Stevenson explore duality in The Strange Case of Dr Jekyll and Mr Hyde?. (2017, Nov 04). Retrieved from https://studymoose.com/how-does-stevenson-explore-duality-in-the-strange-case-of-dr-jekyll-and-mr-hyde-essay 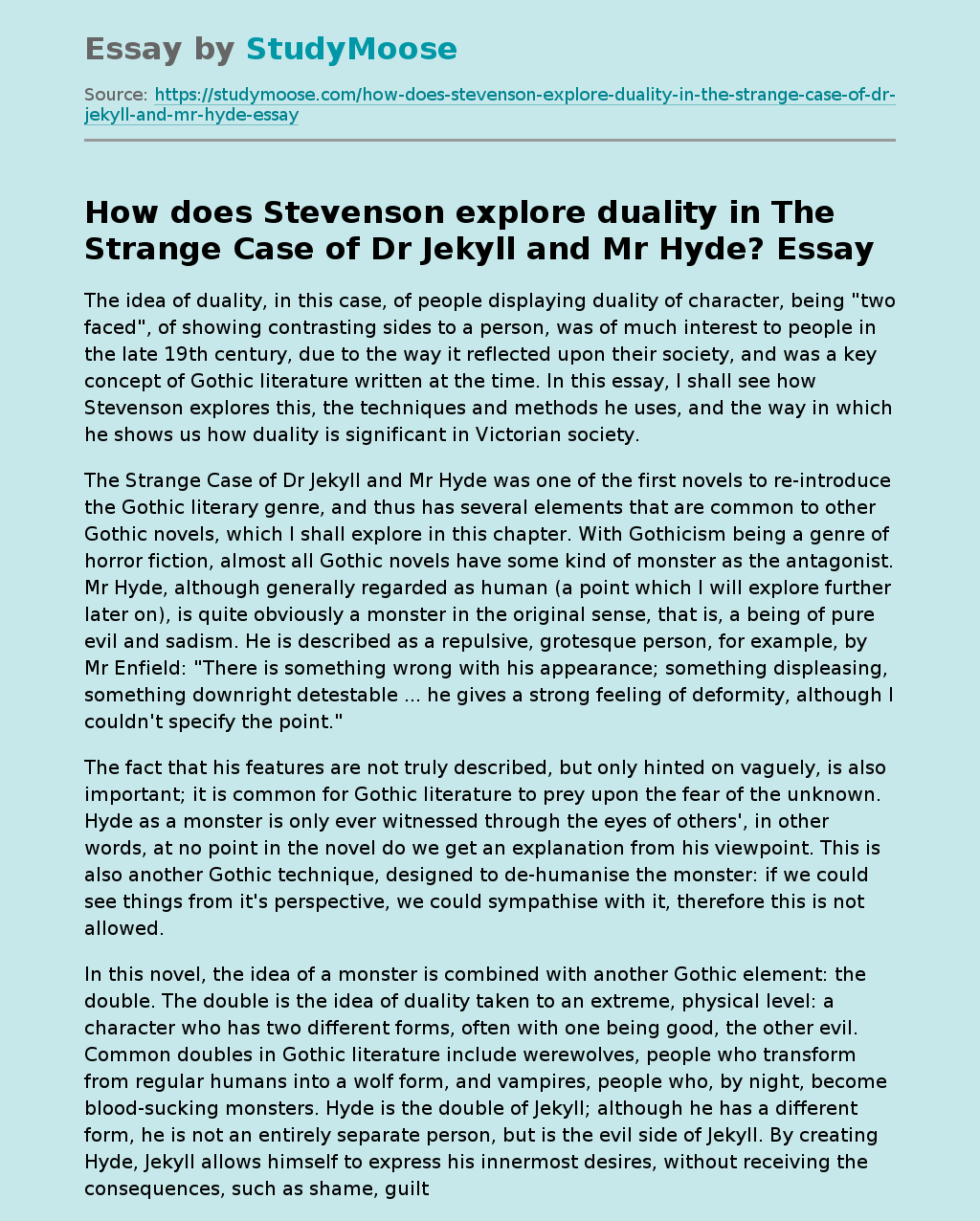