'Good' and 'Evil' in the Strange Case of Dr. Jekyll and Mr. Hyde by Stevenson

Don't use plagiarized sources. Get your custom essay on
“ ‘Good’ and ‘Evil’ in the Strange Case of Dr. Jekyll and Mr. Hyde by Stevenson ”
Get custom paper
NEW! smart matching with writer

Primarily, the concept of good and evil is depicted through the main character Dr. Jekyll and the latter through his alter ego, Mr. Hyde. Physically, Stevenson describes both of these characters as a representation of good and evil respectively. Dr. Jekyll is illustrated as a ‘large, well-made, smooth-faced man… ‘ whereas Mr. Hyde is the stark contrast of his better self. He is constantly described as ‘ape-like’, having a ‘displeasing smile’ and giving ‘an impression of deformity’.

To further amplify this evil nature, Stevenson relates Mr. Hyde’s physical traits to hell by describing him as ‘hellish to see’ and ‘Satan’s signature on a face’.

Through the physical nature of these characters, Stevenson portrays the good and evil in a very overt sense. The theme of good and evil is graphically shown with such demeanours of Dr. Jekyll and Mr. Hyde. Through this, it clearly shows the two opposing halves of the same individual. It is important to note however, that even though Dr. Jekyll is presented as the protagonist of the story, Stevenson injects a whiff of cynicism to his character, as seen through the description ‘… smooth-faced man of fifty, with something of a slyish cast’ and ‘a blackness about his eyes’.

With this subtlety of wickedness in Dr. Jekyll, Stevenson gives the idea of evil being an innate tendency of all humans – that there is evil within all good. This idea of duality is also reflected through the character Mr. Utterson. Although Mr. Utterson is seen as ‘austere with himself’, drinking gin to mortify the taste for vintages, depriving himself of such luxuries; it is said that he sometimes wondered ‘almost with envy, at the high pressure involved in their misdeeds’. It is as if he gleans vicarious pleasure from the wayward ways of these ‘down-going men’.

It is vital to realise that Stevenson takes advantage of various literary techniques to effectively convey the theme of good and evil through this 19th century setting. Through personification, Stevenson depicts the street which represents ‘good’ as lively with a ‘general cleanliness and gayety of note’; whereas the ‘sinister block’ and the door, exemplifies ‘evil’. This is seen through the quotes ‘rows of smiling women’ to describe the street, whereas the door, ‘blistered and disdained’ gives a more dilapidated and violent nature to the ‘dingy neighbourhood’.

Additionally, with the use of simile to describe the street ‘like a fire in the forest’, simultaneously indicating that ‘the forest’ represents the bordering dingy neighbourhood. Thence, the use of language here plays a part too in exploring the idea of ‘good’ and ‘evil’, as it accentuates the setting to better portray this idea. Another setting that Stevenson uses to illustrate the idea of ‘good’ and ‘evil’ is the vivid account of Dr. Jekyll’s house. The house is divided into two conflicting parts, the front portion of Dr. Jekyll’s house and the back that is the laboratory, both of which represent good and evil respectively.

Stevenson describes Dr. Jekyll’s frontier of the house as bearing ‘a great air of wealth and comfort’, although its surrounding is seen as ‘for the most part decayed… ‘ This again, shows the element of good and evil within the same body, as Dr. Jekyll’s house is depicted as ‘handsome’, but present in a place that is ‘decayed’, suggesting a trace of ‘evil’ among the good. The house is further described as exquisite, ‘furnished with costly cabinets of oak’, representing again the ‘good’ aspect Stevenson tries to portray. The front of Dr. Jekyll’s house is then tainted by ‘evil’ in which the laboratory represents.

Again, the use of literary technique is employed by Stevenson to illustrate the relatively sinister nature of the setting. ‘Lying gaunt and silent’ suggests abandonment and even, to a certain extent, suffering, as the word ‘gaunt’ suggests. Hence, it is obvious that through setting coupled with language, Stevenson explores the idea of ‘good’ and ‘evil’ within the novella. This is seen through the setting of the street and the door, the nature of 19th century London in which the good and evil are neighbouring one another, and also, through the duality of Dr. Jekyll’s house. Indeed, ‘The Strange Case of Dr. Jekyll and Mr. Hyde’ is an archetypal novel of the Gothic genre, and was one of the best-selling novels during the Victorian era. What made this particular novella so popular in Victorian England? In my opinion, this novella became so popular largely due to the fact that the people of the Victorian period could relate to such a situation. ‘The Strange Case of Dr. Jekyll and Mr. Hyde’ saw the transformation of a reputable doctor into a malevolent creature of mankind.

This story illustrates the life of a man who was inclined towards seeking liberation from society’s constraints. Perhaps the people of the Victorian period, living under repression, alike Mr. Utterson, relish the vicarious pleasure of liberation through the character of Mr. Hyde? Furthermore, the sensational murders by ‘Jack the Ripper’ could have very well spurred the interests of people about the unexplored mysteries of duplicity in men at that time, supported by the fact that ‘Jack the Ripper’ was assumed to be a man of upper-class.

Atop that, drugs, alcohol and addiction that was rampant during the Victorian era probably plays a role too, in the popularity of Dr. Jekyll and Mr. Hyde. As said in Dr. Jekyll’s ‘Statement of the Case’, ‘… in an hour of moral weakness, I once again compounded and swallowed the transforming draught’. This clearly shows the traits of an addict – and seeing how the whole idea of drugs and addiction was so widespread during the Victorian era, it is hence not a surprise why the people at that time could relate to Dr. Jekyll’s predicament. Undeniably, Stevenson, with the presentation of characters, the use of setting and atmosphere, and lastly the application of language and technique, has skilfully illustrated the idea of ‘good’ and ‘evil’ that is unmistakably prominent throughout the pages of the story. ‘The Strange Case of Dr. Jekyll and Mr. Hyde’ is indeed a classic of literature and has proven to be one of the most well-known works of Stevenson.

'Good' and 'Evil' in the Strange Case of Dr. Jekyll and Mr. Hyde by Stevenson. (2020, Jun 01). Retrieved from http://studymoose.com/good-and-evil-in-the-strange-case-of-dr-jekyll-and-mr-hyde-by-stevenson-essay 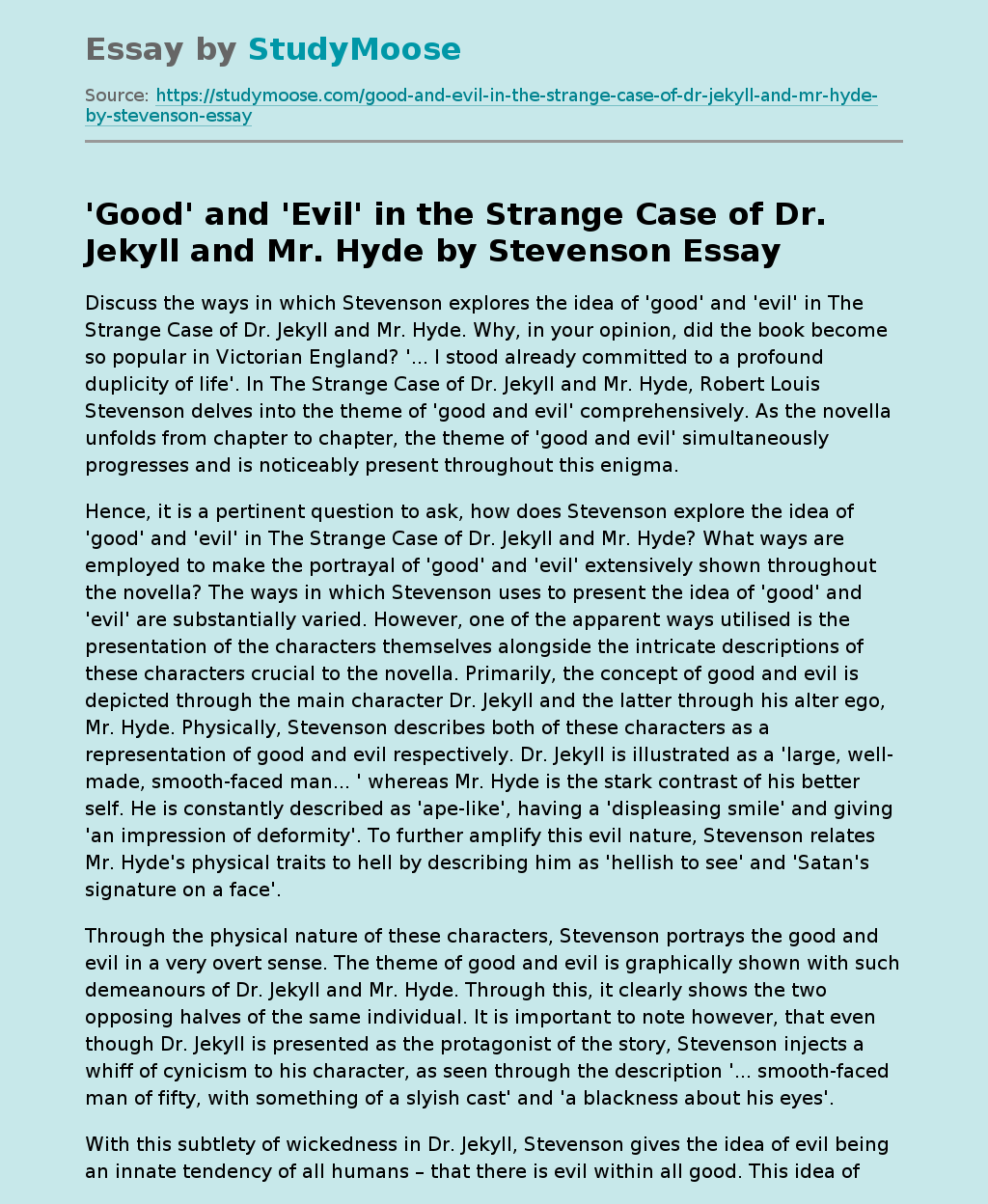