How Stevenson Creates a Sense of Intrigue and Engages the Reader's Interest in Dr Jekyll and Mr Hyde?

In this essay I am going to be exploring how Stevenson examines Victorian hypocrisy and human nature, the duality of man, in his famous tale, The Strange Case of Dr Jekyll and Mr Hyde. His novella, written in 1886, was set in London, and is described as a gothic horror. Stevenson uses Mr Utterson, a ‘modest’ lawyer, to guide us through the novella, unravelling to the mystery gradually throughout the novella. By revealing a few clues at a time, many questions emerge in the reader’s mind, however, only a few of these are answered throughout the tale.

Don't use plagiarized sources. Get your custom essay on
“ How Stevenson Creates a Sense of Intrigue and Engages the Reader’s Interest in Dr Jekyll and Mr Hyde? ”
Get custom paper
NEW! smart matching with writer

Stevenson uses a wide range of language and structural devices to build a sense of intrigue and engage the reader.

Dr Jekyll, a renowned London scientist, was born into a wealthy family with great honour and had gained respect from his fellow men. Dr Jekyll struggled with the dual nature of his nature and although he was loyal to his friends, Jekyll had a dark side, which he choice to express in the person of Mr Hyde.

He noticed that ‘man is not truly one, but truly two’ and this lead him to ‘recognise the thorough and primitive duality of man’. Jekyll saw the need to hide Hyde from the world since he was forced to be respectable and loyal to everyone around him due to his class since birth. However, Dr Jekyll had suppressed his ‘pleasures’ for too long and his darker side grew stronger and stronger inside him throughout his life. Many of the ‘pleasures’ Hyde was able to have included drinking alcohol, and gambling as well as being able to fulfill many of his sexual desires.

I believe that Jekyll was guilty of ‘that crime upon so pitiful as provocation’, which he committed through Hyde, because he had a choice to drink the potion again and carrying on with his devilish deeds or suppress his darker side from committing such devious crimes. Jekyll, himself, couldn’t resist and was too ‘tempted’ to drink more of the potion again ‘with strong courage’, eve though he was aware of the consequences he will have to face. Stevenson engages the readers by using many negative adjectives to describe Hyde, which suggest he is a villain. When Utterson questions the maid the morning after the politician, Mr Carew, was murdered, she explains to Utterson that ‘all of a sudden’ Hyde ‘broke out in a flame of anger, stamping his foot, brandishing his cane and carrying on like a madman’.

This is shocking to the reader because a man who owned a cane in Victorian society was known to be a respectable gentleman. Hyde is also described, by the maid, to have had ‘ape-like fury’. Being compared to an ‘ape’ was said to someone who is a person who resembles a nonhuman primate1 and has so much rage to the point of committing the most unspeakable horror against innocence. Utterson is biased when guiding the reader through the novella. In the first chapter, Story of the Door, Utterson tells us that he is a ‘modest man’ and that his friends are ‘those of his own blood’. The reader is influenced to think that Jekyll, having been stated as a ‘good friend’, belongs to the same middle-class society as Mr Utterson does. So when Jekyll commits his ‘devilish’ deeds, the reader is shocked because men of the middle-class societies are known to be humble and loyal, not ‘evil’.

Stevenson creates intrigue for the reader by using long, lengthy descriptions in the narration in order to draw out the highly gruesome aspects of the scene set in The Carew Murder Case. Around the scene of the incident, there was a ‘misty fog’ and clouds ‘over the city’ while the ‘full moon’ lit up the night. The ‘full moon’ associates with the time when evil beings, often shown as deformed men or werewolves, commit their most heinous acts. The ‘fog’ suggests intrigue and mystery.

Stevenson uses highly descriptive language during the attack. The maid explains to Utterson how Mr Carew, the kindly gentleman, was ‘trampled under foot’ and his ‘bones were audibly shattered’ by the ‘ape-like’ Hyde. Stevenson starts off The Carew Murder Case by describing a quiet scene however this contrasts against the abominable attack, which is described in many gory details. Hyde was described as a ‘small’ person compared to his ‘good’ side, Dr Jekyll, which may be because Stevenson intended to emphasis on how low Hyde had gone by committing heinous crimes.

Using lengthy descriptions, Stevenson sets the scene to create an atmosphere and engage the reader. Stevenson sets his novella in 18- and mentions ‘bad’ deeds and secrecy throughout the parable. This may be because Stevenson saw that although most noblemen seem to be modest and loyal from the outside, inside they hid dark secrets. In chapter 7, The Last Night, Jekyll transforms uncontrollably into Mr Hyde and by describing the unsettling weather, Stevenson shows this as a bad omen. Stevenson shows that the evil was angering the wind outside by describing the wind, ‘which only broke in puffs and draughts into that deep well of building, tossed the light of the candle to and fro.’ Most crimes that Hyde commits are usually during the night as this is the time when evil is lurking around the most. Stevenson also mentions that ‘all human beings…are commingled out of good and evil’ by using Dr Jekyll’s statement.

Stevenson shows us that appearances of middle-class noblemen can never be fully trusted and also ventures to tell us how important reputation was in the nineteenth century. Jekyll had repressed his darker, evil side inside of him for far too long and was unaware that it was growing inside of him day-by-day. Jekyll was forced into being a middle-class nobleman since birth because he was brought up in one such modest family. A similar thought may have emerged in the reader’s in about Jack the Ripper who had been suggested to be living a double life and may have been a respectable man in his society with an uncontrollable dark side. Stevenson shows that the evil in Hyde is very deadly by describing the scene where he tramples on the innocent, little girl on the street corner and also when describing the scene where Hyde slays Mr Carew brutally. Hyde also causes death indirectly when Dr Lanyon dies after witnessing the transformation of Dr Jekyll into Mr Hyde. Dr Lanyon may have realised that he too had an evil side himself.

The nineteenth century was often with Mary Shelley’s concept of a man’s double self. Frankenstein had created his monster in 1818 and many associate the name Frankenstein with monsters and devils nowadays rather than names of scientists. Frankenstein’s monster had destroyed him in a similar way Hyde had brought ‘the life of that unhappy Henry Jekyll to an end’. Dr Jekyll and Dr Frankenstein both wanted to become renowned scientists with their own creations and therefore, Dr Frankenstein had created a monster by ignoring the rules of nature and using body parts of dead human beings, whilst Dr Jekyll had created a potion, which would unleash his evil side, Mr Hyde.

Frankenstein’s monster had had achieved domination over Frankenstein and soon was able to kill him completely. In a similar way, Hyde had overpowered Jekyll and soon murdered him too. Also, a man called Faust had sold his soul to the devil in exchange for absolute power and knowledge whilst he was still alive. Ina similar way, Jekyll created Hyde, as one of his marvellous creations, however, instead of being proud of his creation, Jekyll’s ‘terror of gallows drove him continually to commit temporary suicide’.

After reading The Strange Case of Dr Jekyll and Mr Hyde, when it was first published, readers would have realised that man has both, an evil and a good side to him. At the time the book was published, society was very strict, it didn’t question religion and there was a great divide between poverty and wealth. This made the readers of the time engaged and intrigued. The Victorian Society was very religious at the time and believed that if you sinned then you will be banished to hell for eternity. The story was enormously popular with it Victorian audience, showing a fascination with the ‘other side’ of life. Many of the characters in the novella have professions that were seen to be significant and dominating by society, such as a Doctor and a Politician. The readers may be influenced into thinking that the upper classes were more likely to have a dual personality compared to someone of a lower class. He might also have been moralising here, exposing Victorian hypocrisy for what it was.

How Stevenson Creates a Sense of Intrigue and Engages the Reader's Interest in Dr Jekyll and Mr Hyde?. (2017, Nov 04). Retrieved from https://studymoose.com/how-stevenson-creates-a-sense-of-intrigue-and-engages-the-readers-interest-in-dr-jekyll-and-mr-hyde-essay 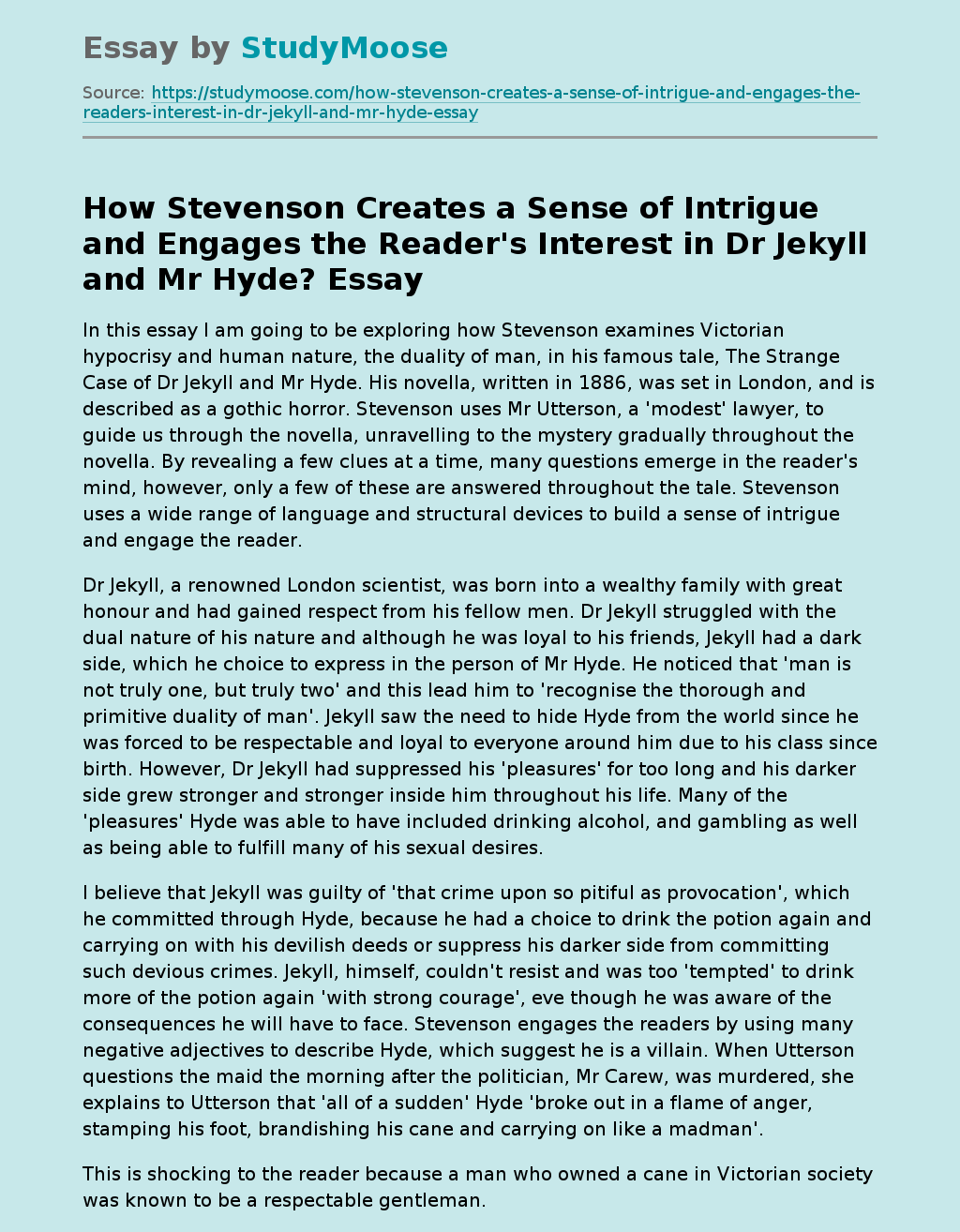